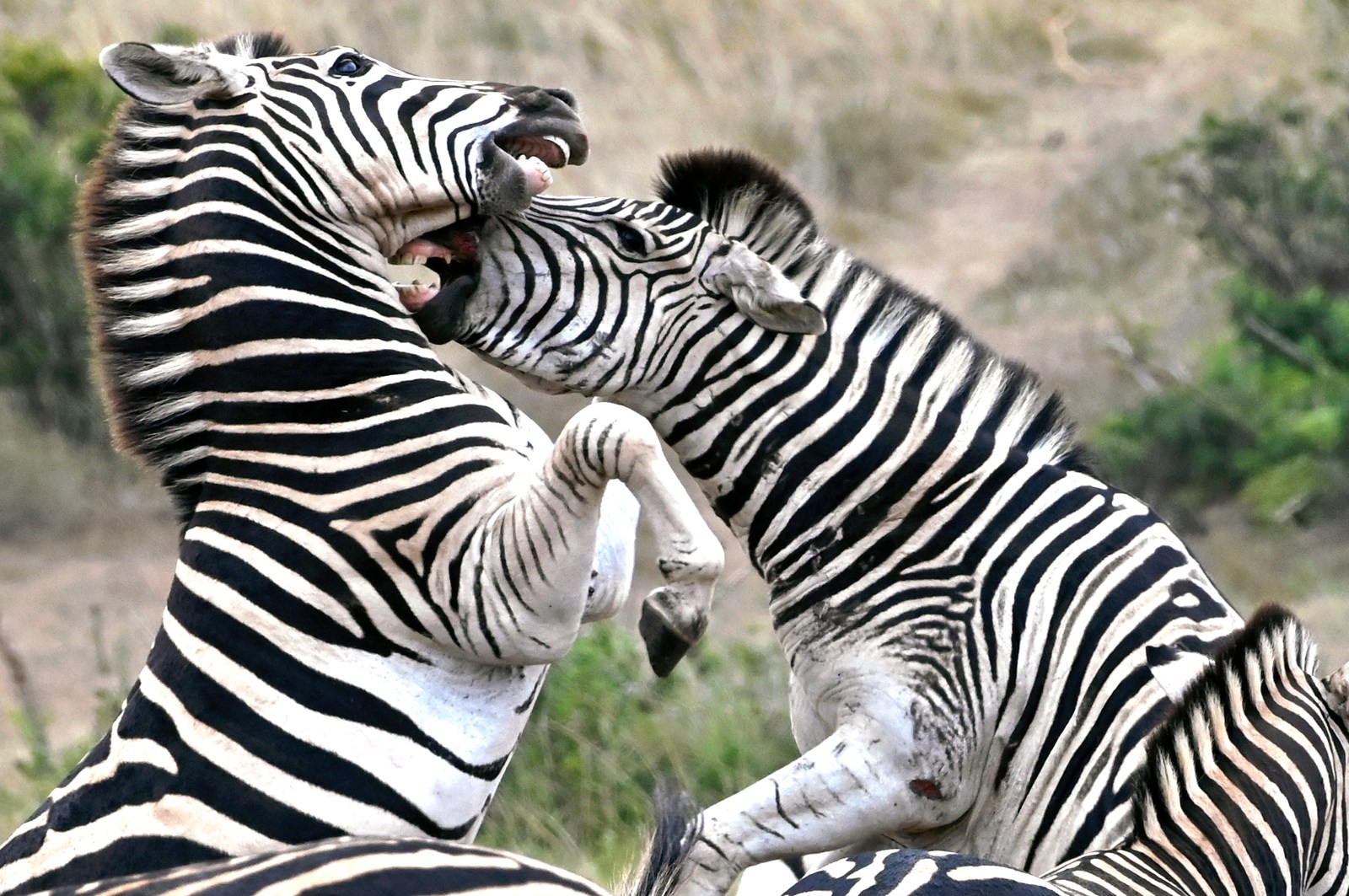 This vicious fight between two zebra stallions would have been related to a female zebra. Their fights can be really serious and sometimes even lead to death. Addo Elephant National Park, South Africa. (Photo: Anne Laing)

How did zebras get their stripes? Keen photographer Anne Laing has some interesting theories.

I am hugely privileged to live directly opposite the southern gate to the Addo Elephant National Park — about 45km from Gqeberha in Eastern Cape.

Addo was established in 1931 and now, at 1,640km2, it is the third-largest national park in South Africa.

Watching the behaviour of the Burchell’s zebras in Addo is absolutely fascinating.

Zebras are actually black with white stripes — although the reverse seems more likely. Their stripe patterns are unique; like fingerprints, no two are the same.

There are several theories as to why they have these stripes, from serving to ward off insects such as biting flies that carry dangerous diseases, to dazzling and confusing potential predators, to actually acting as a stripy air conditioner! The latter theory has it that the black stripes provide warmth on chilly mornings while the white ones help keep the animals cool in the heat of the day.

The collective noun for zebras is “a dazzle”.

They have a social structure in which one stallion has a harem, with anything between two and six breeding mares and their foals. Each harem has a leader or alpha female.

Zebras are not territorial but there are fights between males over females, which can get very aggressive and even lead to death. There are also herds of young single males.

I was lucky enough to see and photograph a newborn zebra recently. It was, at most, an hour old. Amazingly, a foal can stand upright within six minutes of being born. Just compare that to us humans.

The bond between a mother and her baby is so beautiful and always makes for awesome pictures.

An amazing incident happened recently when a very pregnant zebra chose to block a road by standing slap bang in the middle of it. This went on for about 15 minutes, with no tourists’ cars able to pass her.

I was in the second car on the left and picked up my big 200-400mm lens and leaned out of the window to be able to shoot photographs of her. It was almost as if she spotted me and moved closer each time I lifted up my lens — throwing back her head and looking as if she was laughing at me.

This happened a couple of times and she got really close to me. Then cars on the right were able to get past her. I lost sight of her in the traffic, but the car in front of me didn’t move at all. So I very slowly moved out to overtake him. I then saw exactly why he didn’t move: the zebra was standing right against the middle of his bonnet.

As I said,  she was very pregnant, so maybe hormones played a part in this behaviour.

One of the most fascinating things I have witnessed — which happens on really hot days — is when elephants at a waterhole have a standoff with zebras and refuse to let them come close enough to drink. This can last for an hour or more.

It is usually just the stomping of a foot or the waving of a trunk.

Even if young elephants physically shoo them away, the zebras know the elephants will not actually chase them like a predator might, so they only run about three metres anyway. It’s a bit like a game of chess.

When there has been rain, the elephants have enough water sources in the bushes and don’t turn up at the waterholes. Then one can watch the zebras and their sometimes funny and quirky behaviour instead. DM168