New law promises a boost to Gauteng’s township businesses — but could it spark more xenophobic attacks? 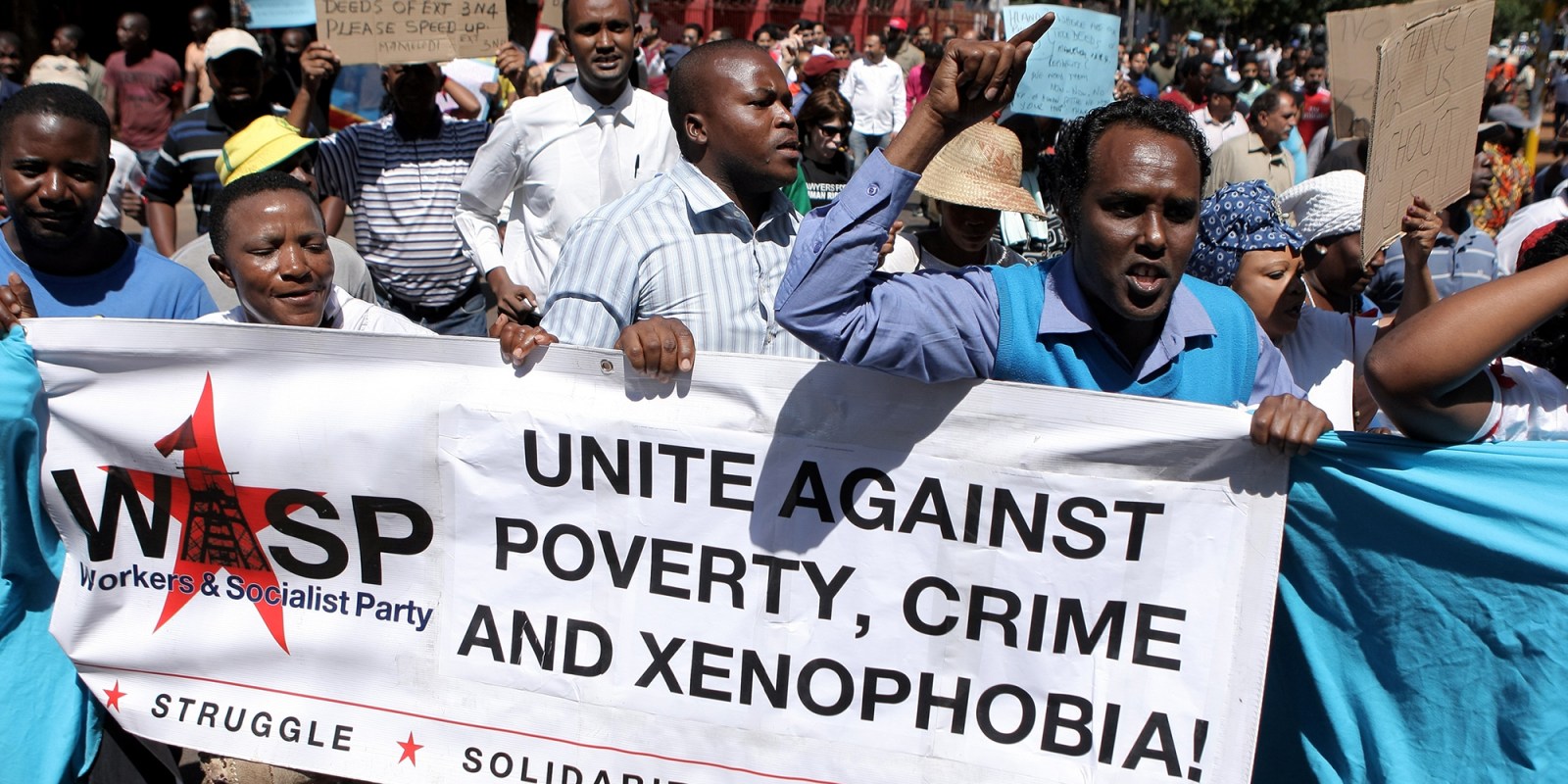 Amir Sheikh, spokesperson for the African Diaspora Forum, said messages such as Gauteng Premier David Makhura’s could be weaponised by organisations such as Operation Dudula and anti-migrant political groups such as the South African First party and ActionSA. (Photo: Gallo Images / Sowetan / Sandile Ndlovu)

Pro-migrant lobby organisations have slammed what they describe as ‘discriminatory’ rhetoric by Gauteng Premier David Makhura during the promulgation of the Gauteng Township Economic Development Act last Friday. They say it is putting the lives of foreign nationals at risk.

Lawyers for Human Rights and the African Diaspora Forum (ADF) will be monitoring the implementation of the Gauteng Township Economic Development Act and are prepared to challenge it in court if it infringes on the rights of non-nationals.

The act, signed into law by Gauteng Premier David Makhura on 29 April, is aimed at transforming and funding township-based businesses in Gauteng.

The Township Economic Development Bill was passed by a unanimous vote in the Gauteng legislature on 24 March. The law, which came on the back of the Township Economic Revitalisation Campaign in 2015 and 2016, is part of the provincial government’s effort at formalising township businesses and “provides a regulatory framework that makes it possible for entrepreneurs living in townships to establish viable and thriving businesses, small enterprises and co-operatives”.

Read in Daily Maverick: Township Economic Development Bill is a game changer for the economic geography of Gauteng.

Today, I am filled with deep emotions as I sign into law a historic piece of legislation, the Township Economic Development Act. This Act is a timeless monument to the resilience & tenacity of towering pioneers of the Township Economy such as Ntate Richard Maponya. #TownshipEDAct pic.twitter.com/8EV7wctEOK

Speaking to Daily Maverick, Amir Sheikh, spokesperson for the African Diaspora Forum, said the organisation condemned this “discriminatory, populist rhetoric” by the premier on this and previous occasions.

According to Sheikh, Makhura had made similar “exclusionary” remarks towards township-based non-citizens while addressing crowds at Orange Farm on the Township Economic Development Act in early April.

“What is more worrying than the act itself, is the reckless, discriminatory statements made by the premier — who is the number one citizen in the province — that we believe can provide a reason for a resurgence of another xenophobic attack,” Sheikh told Daily Maverick.

Sheikh feared that messages like these could be weaponised by organisations such as Operation Dudula and anti-migrant political groups, the South African First party and ActionSA.

While visiting Orange Farm, Makhura called on South Africans to “take back” spaza shops — but without fighting foreigners, TimesLive reported.

Makhura’s address in Orange Farm came amid deadly protests in Diepsloot, north of Johannesburg, which were sparked by the murders of six people, high crime rates and inadequate policing. Daily Maverick previously reported that the murders were fuelling residents’ anger and discontent, especially against migrants.

Head of the Refugee and Migrant Rights Programme at Lawyers for Human Rights, Sharon Ekambaram, echoed Sheikh’s remarks on the premier’s statements: “My concern is that the climate within which these policy changes are being made and enforced… it’s allowed for politicians — in the way that they’re speaking about these policies — to then be xenophobic and to put emphasis on the rights of South Africans, pitting South Africans against foreign nationals.”

Read in Daily Maverick: SA politicians stoke the flames of xenophobia in macabre spectacle to woo back voters

Following the publication of the Gauteng Township Economic Development Draft Bill in September 2020, a wide range of organisations — including the ADF, Lawyers for Human Rights and the Socio-Economic Rights Institute (Seri) — made submissions.

The organisations highlighted concerns about the unconstitutionality of the bill, which Lawyers for Human Rights and Seri said “explicitly [deprived] foreign nationals the freedom of self-employment, entrepreneurship or to conduct a business” by reserving “an undisclosed number of economic sectors in Gauteng’s townships for South African citizens and permanent residents”.

Submissions from the ADF, Lawyers for Human Rights and Seri concluded that the draft bill required extensive revision for it to give effect to its intended objectives.

In August 2021, an updated version of the Gauteng Township Economic Development Bill had removed the discriminatory provisions, but some organisations noted that the new draft bill still required further revision, with the aim of contributing to the transformation of township economies “to allow all those working in Gauteng’s informal sector economies to do so with dignity, opportunity and adequate government support”.

Sheikh said that while the act in its present form is “no longer that discriminatory” after certain provisions were removed, he remained concerned over the implementation and interpretation of the policy by law enforcement, and the municipal by-laws which are set to detail the requirements needed to obtain licences and access funds.

“As a forum, we are not against any legislation that will improve the lives of the marginalised, black population in townships and informal settlements, but we are against anything that will discriminate based on people’s documentation in the country or their nationality,” said Sheikh.

“We still believe that if the act will be inclusive, we will have no problem with it, but if [it] discriminates against the nationality of our members, or impedes the right of non-nationals in any way, the only remedy will be to challenge it in a court of law,” he said.

Ekambaram said that Lawyers for Human Rights and Seri “will be monitoring the implementation of this policy, and litigation is one of the options that will be considered if all attempts to engage with law enforcement agents is unsuccessful with respect to infringement of basic human rights and respect for human dignity of vulnerable populations living in townships in Gauteng”.

In response to questions from Daily Maverick, Vuyo Mhaga, spokesperson for the Gauteng premier, said: “I don’t see how the act in its entirety will affect the rights of foreign nationals.

“However, by-laws will favour businesses operating in townships regardless of nationality,” Mhaga said. DM