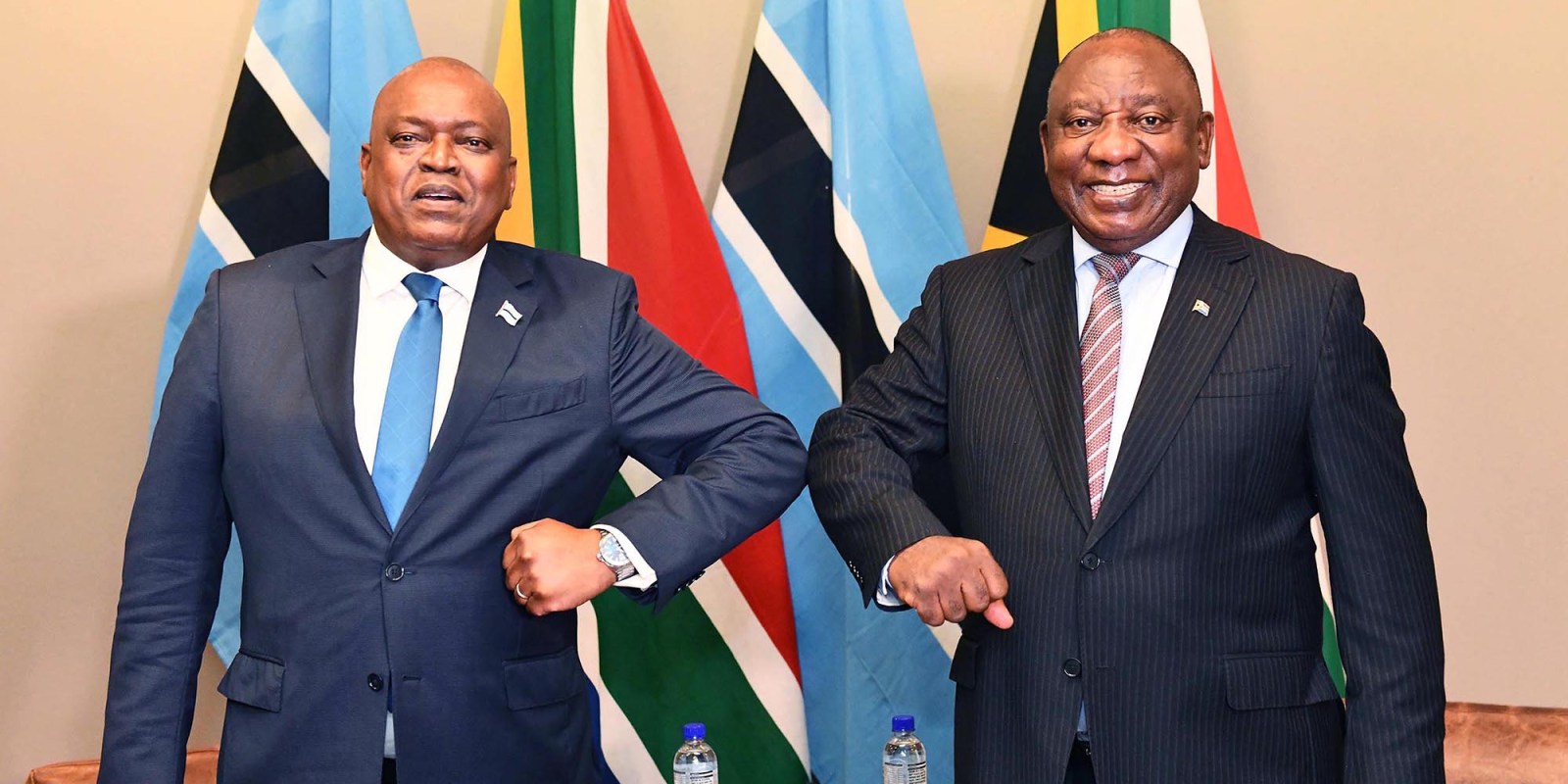 President Cyril Ramaphosa with President of Botswana Mokgweetsi Masisi before the fifth session of the Bi-National Commission of Cooperation between South Africa and Botswana in Pretoria on 22 April 2022. (Photo: Jairus Mmutle / GCIS)

Cyril Ramaphosa has downplayed possible tensions with his Botswana counterpart Mokgweetsi Masisi over the presence in South Africa of the neighbouring country’s former president, Ian Khama.

Former president of Botswana Ian Khama has been in South Africa for the past five months and failed to appear in court in Gaborone on Thursday last week on charges of unlawfully possessing a firearm, claiming he fears for his safety should he return to his home country.

South Africa’s President Cyril Ramaphosa admitted that current president Mokgweetsi Masisi brought up this issue during a tête à tête on Friday. The face-to-face meeting between the two leaders delayed the scheduled start of SA-Botswana binational commission official discussions — attended by ministers and officials from both countries — by about an hour.

“We only discussed it to the extent of him informing me that charges have been preferred against the former president here in South Africa,” Ramaphosa said after he saw Masisi off at the Department of International Relations headquarters in Pretoria.

This was in response to a question by Daily Maverick about whether South Africa was being perceived as harbouring a fugitive from justice.

“Former president Khama is here on a visit, so we are not perceived as harbouring a person who is a fugitive or whatever,” Ramaphosa said. “Our relations between South Africa and Botswana are so warm, so good, and so positive that we will be able to deal with any challenge that comes our way.”

He revealed that he and Masisi speak on the phone weekly and “we chat about all manner of things”, including their mutual interest in cattle farming.

Bad blood between Khama and his successor raised tensions between the two countries in 2019 to such an extent that then international relations minister Lindiwe Sisulu travelled to Gaborone as Ramaphosa’s special envoy to mend bridges.

Khama and Motsepe’s names later arose in a court case against a former intelligence agent.

They were not charged, but there were allegations they played a role in taking $10-billion out of Botswana and laundering it through South African banks.

No evidence of this has been produced, but Botswana’s prosecuting authority has employed AfriForum advocate Gerrie Nel to compel South Africa to provide mutual legal assistance in this regard. South Africa’s Department of Justice has been accused of not responding timeously in the matter, but has said, in its defence, that it is a complex matter.

Motsepe is, however, now required to apply for a visa if she wants to visit the country where she once lived in exile. Citizen travel between the two countries is normally visa-free.

Khama told Daily Maverick on Thursday that he did not appear in court because he hadn’t received a summons to do so through proper channels.

“I saw it on social media,” he said. He sent lawyers to represent him.

Khama joined the opposition Umbrella for Democratic Change — in which three opposition parties are working together — in 2019 and has since campaigned against the BDP, which his father Sir Seretse Khama founded in 1961.

Khama left Botswana on 8 November, the deadline date director-general of Botswana’s intelligence and security services Peter Magosi had given him to hand over firearms that the state alleges have been stolen.

Khama claimed Ramaphosa became involved in reconciliation efforts between him and Masisi, which included plans to get former Nigerian president Olusegun Obasanjo “and two prominent personalities” to mediate. Khama said the initiative was rebuffed by Masisi, but this could not be independently verified, with Ramaphosa’s spokesperson Tyrone Seale saying, “No comment.”

The two presidents spoke warmly of relations between the neighbouring countries at the bi-national commission session.

Ramaphosa departed from the scripted copy of his speech circulated to journalists to acknowledge the role played by Botswana, alongside other Frontline states, in the struggle against colonialism and apartheid.

He said the struggle had changed and was now about overcoming poverty and growing the economies of the respective countries.

Masisi, in turn, departed from his scripted speech to emphasise how Botswana’s role in the struggle against apartheid brought the two countries closer together.

He emphasised how Botswana had provided a safe haven for leaders of liberation movements from Mozambique, Zimbabwe, Namibia and South Africa. Masisi reminded Ramaphosa that the ANC held its first annual meeting after its 1962 banning in Lobatse.

Last year, at a farewell function for South African high commissioner Rosemary Mashaba, Masisi said the BDP should be recognised as a former liberation movement — a complex issue that has been the subject of much debate and contestation. The ANC was historically closer to the socialist-oriented Botswana National Front, but many South Africans in exile — including current International Relations Minister Naledi Pandor and Motsepe — grew up in Botswana and were close to the governing elites of the time, including the Khama family.

After Botswana gained independence in 1966, the BDP-led government had to maintain peaceful relations with white minority governments in the region due to economic dependency.

“I brought a few more than you did, Your Excellency,” he told Ramaphosa. “South Africa is our biggest trading partner, it makes sense that we take it seriously. But I’m told that South African ministers are so competent that they can handle two or three ministers at a time,” he joked.

Ramaphosa explained that a number of his ministers were involved in flood mop-up operations in KwaZulu-Natal.

For Masisi’s cabinet, the South Africa trip came at a somewhat awkward time. Masisi chose Thursday, midway through the two-day meeting, to announce a restructuring of the cabinet portfolios in a televised address to the nation — in what observers say was an attempt to strengthen his hand ahead of 2024 elections.

Ministers had to rush back from Pretoria to Gaborone on Friday afternoon to find out what the implications of the restructure would be for each of them. DM