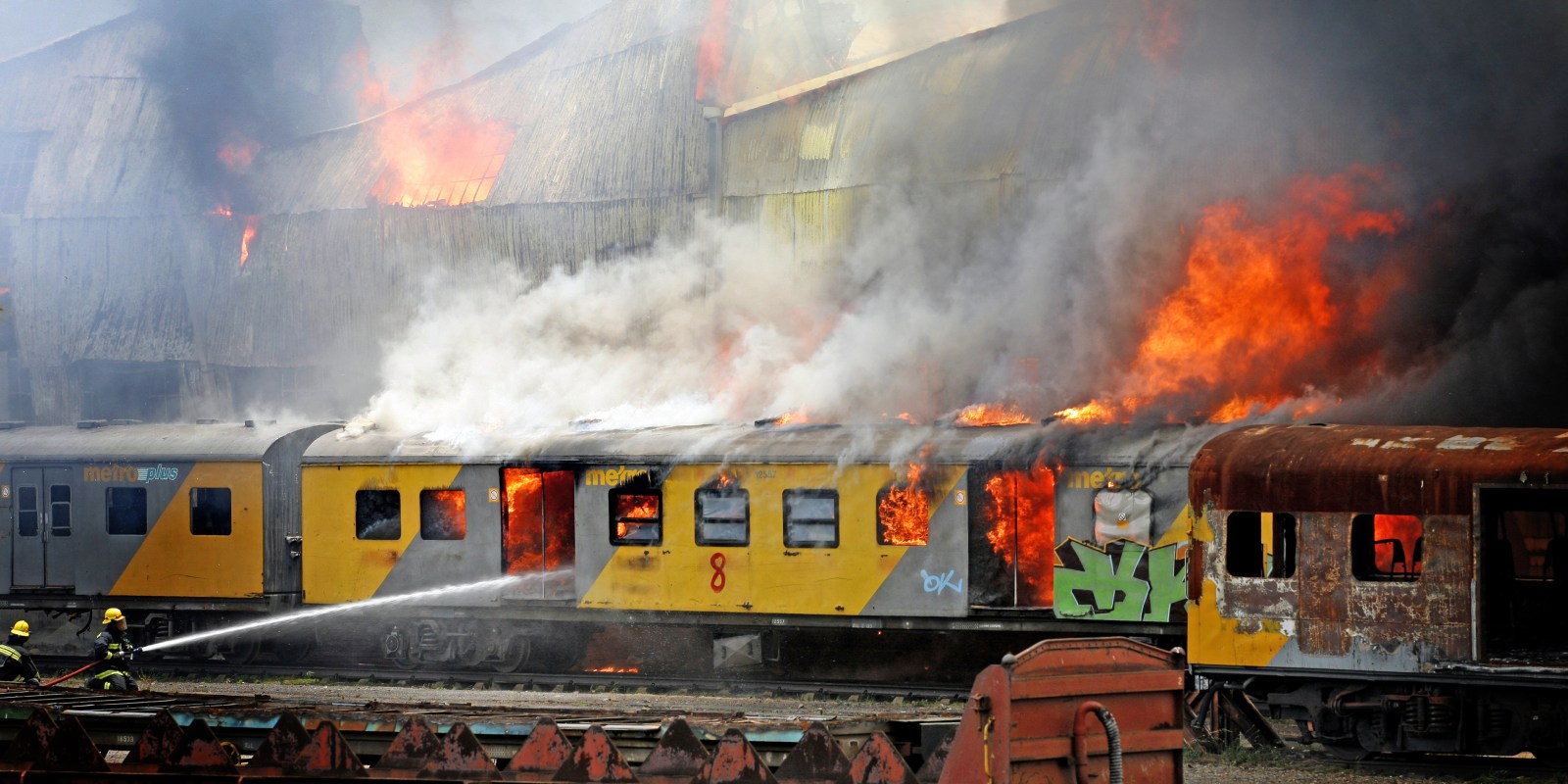 A warehouse and a train burn at the Transnet facility in Salt River, Cape Town, while firefighters battle the blaze on 11 December 2007. (Photo: Gallo Images)

A taxi driver, convicted of setting a train carriage alight, has revealed that the taxi industry benefits whenever trains are put out of service.

Ricardo Khan, who worked at the Eerste River taxi rank, was sentenced to 20 years in prison this week by the Blue Downs Magistrates’ Court. Damage of R3.5-million was inflicted on the Eerste River train station on 20 March 2020, with a projected impact of R9-million on the Passenger Rail Agency of South Africa (Prasa).

“The accused testified that he gets paid more if more taxis are in operation and business is good.”

After the 20 March 2020 fire at the Eerste River train station, law enforcement officers, Prasa officials and a police team attached to the provincial command in Cape Town probed the crime scene, but were spared a protracted investigation when a commuter approached them and pointed out the suspect.

According to Ntabazalila, a Prasa official had filmed the incident, which on closer inspection confirmed the suspect’s involvement. Khan was arrested and denied bail.

During the trial, the court also heard evidence of the huge financial losses Prasa suffered from arson attacks, cable theft and vandalism. Prasa chief investigator Jan Paul Jordaan said in his court testimony that the rail agency fell about 70% under its budget every month from a failure to generate income due to the lack of train services.

Jordaan further highlighted the impact this had on people in the Western Cape as trains were the cheapest mode of transport.

Herold Jacobus van Reenen, a senior protection officer at Prasa, also took the stand and told the court that since 2019, there had been four train burnings, theft from stations, vandalism and theft of copper cables.

Mbalula said the agency was in a “dire financial position as it is not generating sufficient revenue to cover its operating costs”.

Prasa on the hook at Scopa over 3,000 ‘ghost’ employees and many other disasters

Thousands of commuters in the Western Cape have also been left stranded for months due to cable theft and vandalism of Prasa’s equipment. However, Prasa is still working around the clock to reopen the troubled Central Line, which runs between Cape Town, Philippi, Netref, Chris Hani (Khayelitsha) and Kapteinsklip (Mitchells Plain).

This problem was further compounded by people illegally building shacks on the tracks at Philippi and Langa stations.

Last month, the service from Cape Town station to Bellville, via Goodwood, resumed for the first time since 2020.

The train service in Gauteng was also hit hard by vandalism and cable theft. An assessment by Daily Maverick at 20 Gauteng stations and routes including Kliptown, Germiston, Chiawelo, Midway, Knights, Jeppe, Residensai, Randfontein, Naledi and Doornfontein showed the outcomes were devastating.

In closing arguments, senior state advocate Aradhana Heeramun underlined that the financial loss sustained by Prasa was one of the factors the court had to consider.

“However, the impact that these incidents have on the poor in our communities is where the real tragedy lies. Trains are the cheapest form of transport. When sets are put out of use, commuters are forced to use the taxis, which are more expensive and this ultimately costs commuters more money.

“Only the taxi industry benefits when trains are put out of service. Prasa has to reimburse commuters due to the sets being put out of use. The replacement of the carriage comes at exorbitant costs to the State,” Heeramun said.

Heeramum further reiterated that the successful prosecution could be attributed to teamwork and the dedication of all roleplayers. The prosecution commended the investigation officer, Sergeant Marthiens Jacobs, for his hard work.

Director of Public Prosecutions in the Western Cape Nicolette Bell said: “We are pleased with this sentence. It sends a very strong message because burning trains is economic sabotage. Its impact goes beyond the immediate satisfaction of the accused and negatively affects the country’s economy.” DM