Thirty-nine reserved judgments in the Western Cape High Court have been outstanding for more than three months, the limit set out in judges’ norms and standards, according to Judge President John Hlophe.

On 22 April, Judge Derek Wille handed down an order in a matter involving the Western Cape government and a service provider that served to highlight the cost of tardiness in the Western Cape division.

Wille’s judgment made plain the detrimental impact of delayed court proceedings on service delivery and the significant prejudice suffered by service providers and citizens.

Four days earlier, on 19 April, Judge President John Hlophe sent a memorandum to all judges and acting judges in Western Cape pointing out that 39 reserved judgments had been outstanding for more than three months, the limit set out by the judges’ norms and standards.

In some instances, judgments have been outstanding for two years. Cases in limbo include several involving the City of Cape Town, alongside matters related to Prasa, SARS, the Minister of Correctional Services, Steinhoff, the Department of Home Affairs and others.

Some are civil and some are criminal matters and include applications for rezoning, road accident fund claims and eviction applications. All involve costs and affect individuals, businesses and governing structures.

While Hlophe’s memorandum states that 39 judgments have been outstanding for more than three months, a list attached to the communication indicates that, as of Wednesday 14 April, there were more than 80 outstanding or “reserved judgments”. 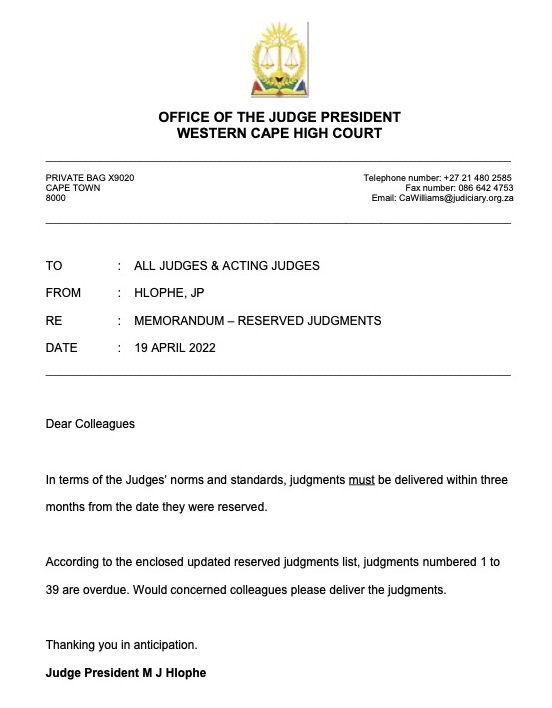 On Friday, Wille issued an interim interdict preventing the Western Cape government from “purporting to terminate” any contracts with a security company rendering services to a hospital in Paarl. The company employs 48 security personnel.

DC Security took issuance of the tender on review and the matter was heard in September 2020. Nothing happened after that.

“The domino effect of this delayed judgment hindered the awarding of any further ‘security services’ contracts in accordance with the tender process,” noted Wille.

Wille was discreet in not naming the colleague whose tardiness in handing down judgment resulted in the application for the interdict, but it is public knowledge that it was Acting Judge Bernard Martin. Martin has consistently acted as a judge under Hlophe’s leadership.

Evident in Wille’s judgment are the detrimental effects of a delayed decision on the livelihoods of real people, who stand to lose jobs as judges dither.

Responding to the need for resolution, Willie noted that both the applicant in the matter, DC Security, and the respondent, the Western Cape government, were “entitled to an outcome delivered on the main review application”. In other words, they were entitled to a judgment.

In his view, said Wille, it would be impractical to grant “unchecked interim relief” pending the judgment in the main review application.

“I say this because the judgment has been outstanding for at least 19 months and there is no clear indication as to when this judgment will be handed down.”

Wille requested that a copy of his order be sent to Martin.

Attached to Hlophe’s 19 April memorandum was a list of acting judges and judges with outstanding judgments that are now spilling over into the 11 April to 17 June term.

Acting Judge Nyathi is chair of the Western Cape branch of the Black Lawyers Association, which backed Hlophe’s nomination for a position in the Constitutional Court.

In April 2021, Nyati, who serves as a district court magistrate in Cape Town Magistrates’ Court, was appointed an acting judge in the division along with James Lekhuleni, then president of the Western Cape Regional Court and who returned to the Bench for his second acting appointment.

Lekhuleni and Tulare were permanently appointed to the Bench from January 2022.

The appointment of acting judges to the Cape Bench was brought into sharp focus by Deputy Judge President Patricia Goliath in her January 2020 complaint to the Judicial Service Commission about her boss, Hlophe. In her complaint, Goliath accused Hlophe of repeatedly appointing the same people as acting judges.

Goliath also claimed Hlophe’s wife, Judge Gayaat Salie-Hlophe, would discuss acting appointments in the division with her [Goliath] before these were made known to other judges.

Salie-Hlophe would then “without hesitation” express her own views about candidates and inform [Goliath] whom she and the Judge President considered appropriate.

The workload South African judges face has increased drastically over time, with former chief justice Mogoeng Mogoeng commenting at the release of the 2019 Judiciary Annual Report on the weight of work handled by the high court.

In April 2021, the JSC appointed advocate Nobahle Mangcu-Lockwood and attorney Matthew Francis to the Cape Bench, bringing the number of judges in the busy division to 33.

Hlophe was unanimously found guilty of gross misconduct by a Judicial Conduct Tribunal — a decision endorsed by the JSC in April 2021.

Hlophe currently faces a pending impeachment inquiry, which he is challenging. The Judge President was found guilty of attempting to influence judges of the Constitutional Court in 2008 in a matter involving former president Jacob Zuma (deputy president at the time) in a matter related to the Arms Deal.

Hlophe has not been suspended pending the impeachment challenge and remains firmly in control of the division. DM