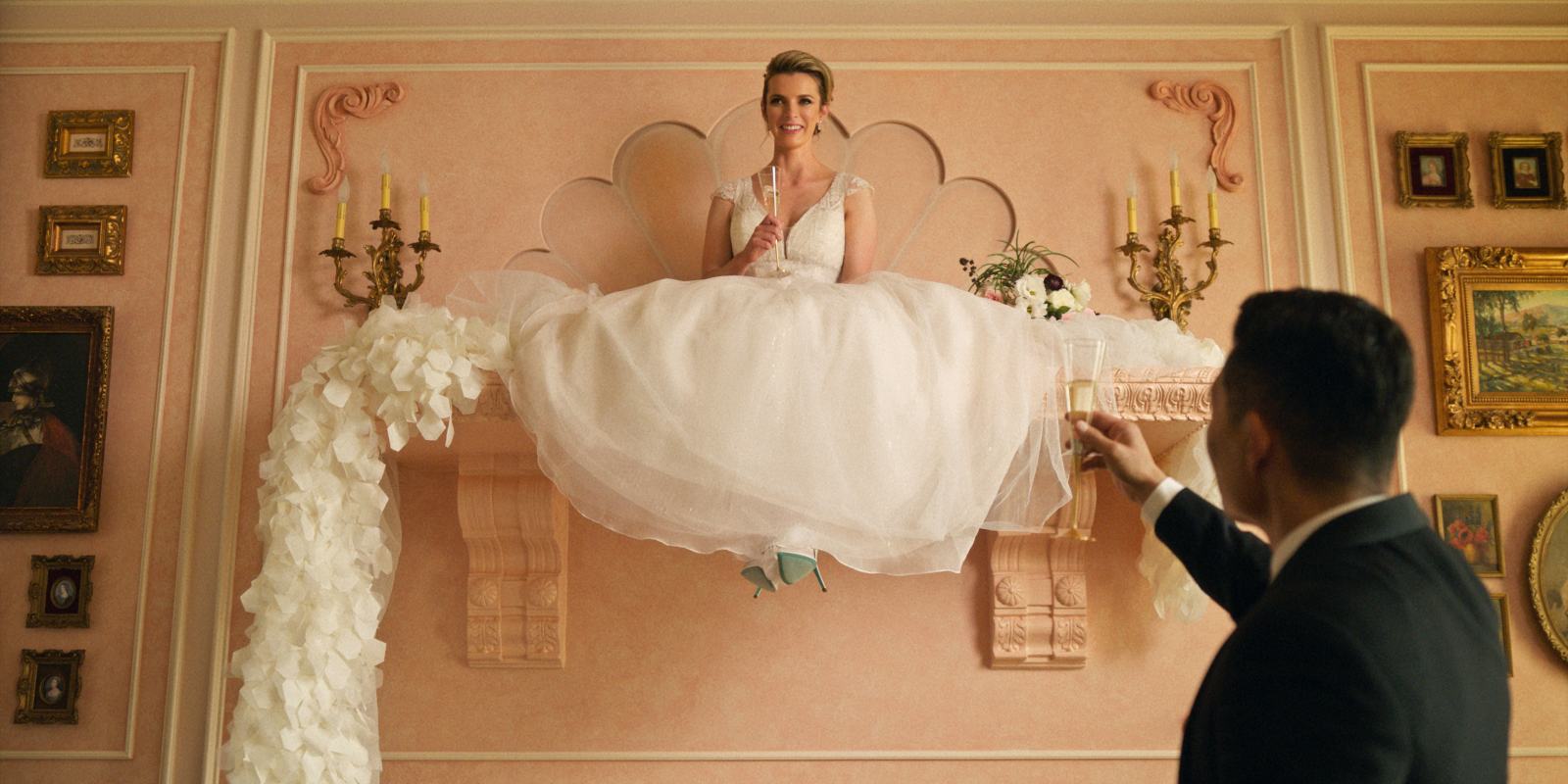 Betty Gilpin in Episode 3: The Woman Who Was Kept on a Shelf. (Image courtesy of Apple TV+)

This newly released series is a collection of half-hour standalone dramas about women shaken up by quirky science fiction premises, some of which are much more fun than others.

Roar is Apple’s reply to Black Mirror and Love, Death and Robots, science fiction anthologies that have done very well on Netflix. Both series are excellently produced and explore freaky futuristic concepts that make them feel relevant. Roar does the same but with more prominent ideological messaging.

Based on bestselling author Cecelia Ahern’s short story collection of the same name, created by the makers of the underrated Netflix series GLOW (Gorgeous Ladies Of Wrestling), and starring some big names (Nicole Kidman, Betty Gilpin, Cynthia Erivo, Alison Brie and more) Roar lives up to its potential about half the time.

The stories are essentially feminist fables, each exploring some aspect of modern life as a woman and leading to an uplifting moral or lesson. The anthology format is nifty in its versatility. Because the episodes are short and self-contained, a viewer could watch the series slowly over time without having to keep track of past plots, or binge the whole thing in an evening. But it’s a challenge of the format to tell a nuanced story in a limited time, and this is especially difficult if each one has to end by making a point.

The episode titles are straightforward descriptions of their plots, often making it easy to anticipate where things are going. The best ones (episodes 4, 5, 6 and 7) are those that take their setup in a strange direction or extract from it an unexpected lesson.

The viewer begins every episode knowing something that the protagonist does not, and the time it takes for them to catch up cuts into the already short instalments. Without enough space to develop, the less successful episodes either don’t reach a conclusion or follow the trajectory of their setup too obviously, lacking the ambiguity required for them to retain authenticity and intrigue.

The first few episodes have some of the most fun concepts and make heavy societal observations, but they’re actually the less cohesive of the series.

Episode 1, The Woman who Disappeared, stars Issa Rae as a recently successful author who arrives in Los Angeles to meet producers about adapting her memoir into a film. In the first moments of the series, Roar makes its ideological standpoint clear, embracing woke rhetoric and terminology in terms of gender and race. There are a lot of uncomfortable race-related experiences packed into this episode. In the first few minutes, a black man reveals that he changed his name to fit in better in a white workplace, and a rental site rejects a woman’s ID verification because the AI “clearly do not know how black hair works”.

The satire is most pronounced during the meeting in which four white men (one played by Nick Kroll) pitch to adapt her memoirs into a “virtual embodiment” experience so that viewers get to walk a day in a black woman’s shoes, a messed-up, gimmicky idea which she calls “Being Black For Dummies”. The irony is that it feels like that title is how the writers conceived this episode.

Episode 1 is the best example of how Roar could have been improved – it has a great premise relating to women (black women in particular, in this case) not being heard, relays relatable experiences and humorous social commentary, but doesn’t resolve with a tangible solution to the problems it dredges up, it just dissolves into end credits. The same is true of episodes 2, The Woman Who Ate Photographs, and 3, The Woman Who Was Kept On A Shelf.

Episode 2 stars Nicole Kidman as a woman struggling with her identity as her abrasive mother’s dementia progresses and her eldest son is getting close to leaving the nest. She discovers that by eating old photographs she can relive those memories. Feeling nostalgic and overwhelmed, she begins literally consuming her childhood. It’s an evocative idea, but it doesn’t interact with the story at all – it’s as if the plot and the concept were conceived separately and mushed together.

For an example of Roar at its best and weirdest, watch Episode 5, The Woman Who Was Fed By A Duck (the word “Fed” in the title is a euphemism for a different F-word). Merritt Wever plays a single woman in her thirties disillusioned with the dating world, who begins to question whether she is the problem. One day in the park she gets hit on by a witty talking duck and just goes with it.

There’s a bizarre quality to the woman-bird banter that is cute, funny, awkward and messed-up. This is the wackiest and most ridiculous episode, but also an insightful discussion about the pressures of dating and the insidious nature of abusive relationships, ending with a lesson learnt about drawing value from oneself rather than in relation to others.

Another good one is The Woman Who Returned Her Husband, which counterbalances the messaging of The Woman Who Was Fed By A Duck, by promoting self-reflection and the willingness to face one’s own flaws. Meera Syal plays a middle-aged Indian woman who feels trapped in the routine of her 37-year marriage. But one of her friends reassures her that this is America, land of the free – she can just take her husband’s warranty to the store and exchange him for another model, as if he were a defective toaster.

This fantasy, which many women have doubtless conceived, is actually an allegory for how relationships change over time and how people take one another for granted. Though it starts by literally objectifying men, it evolves into an honest and ultimately kind take on how marriages endure.

Though the quality of each episode of Roar varies quite a lot, most anthologies are a mixed bag. The insistence on ending on an uplifting note even when the story doesn’t lend itself to positivity makes some episodes feel a tad formulaic, but even those are built concepts that are fun enough to hold your attention. DM/ML

Roar is available in South Africa on Apple TV+.