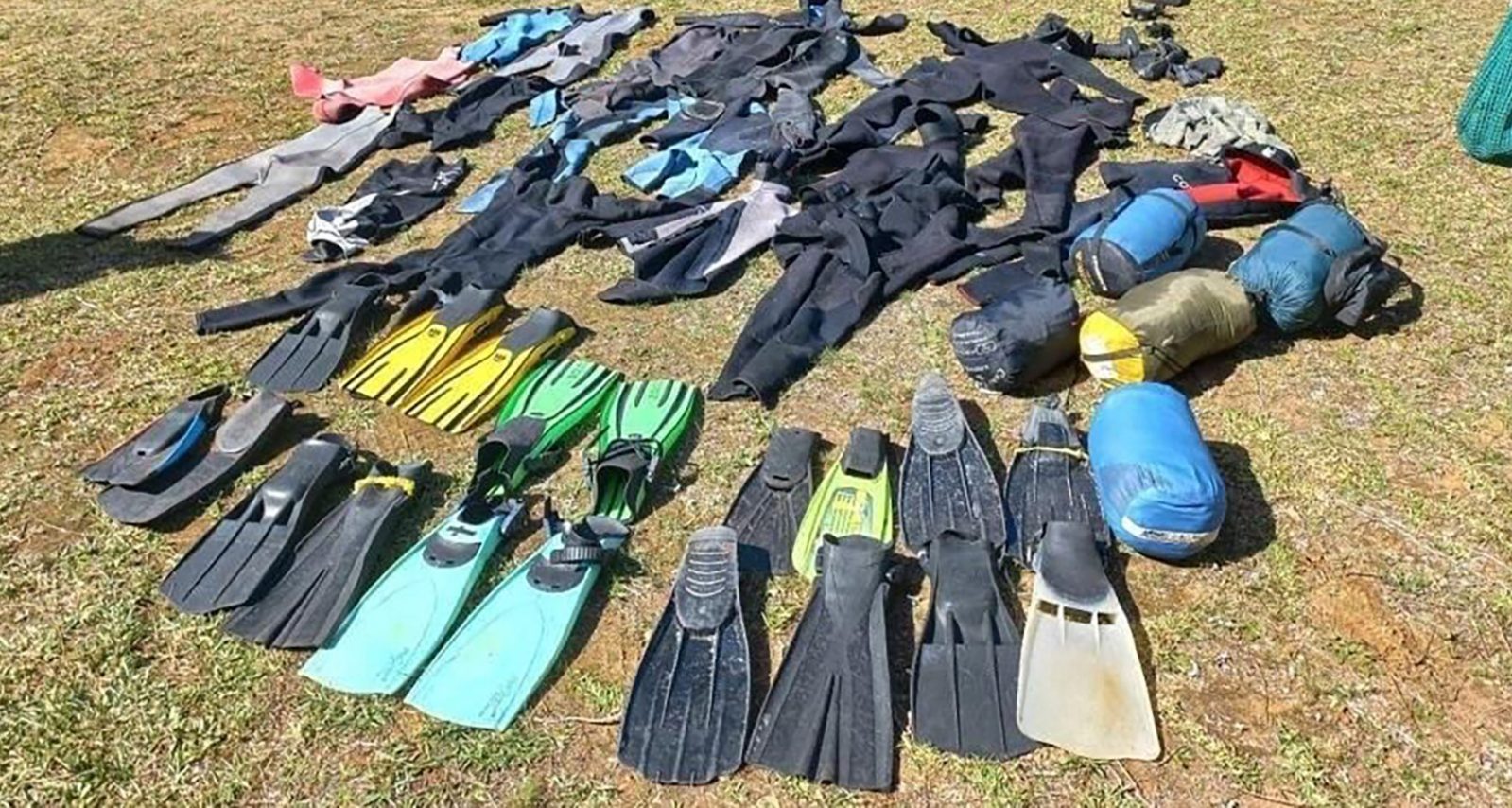 Diving gear and equipment used for abalone poaching at the Cape of Good Hope. (Photo: Supplied)

On Friday, the Sea, Air and Mountain team and the SANParks team recovered diving gear and other equipment used for poaching abalone.

Lauren Howard-Clayton, SANParks regional communications manager, said no suspects have been arrested. “It isn’t possible to say with absolute certainty that these were poachers operating at that particular camp, as the marine-protected area around the Cape of Good Hope section covers the entire coastline,” said Howard-Clayton.

“By and large, it was successful due to area coverage, visibility and man-hours spent in proactive patrols. However, our effectiveness was impacted by the wind conditions over the weekend,” added Howard-Clayton.

In December 2021, three alleged poachers were arrested in the Cape of Good Hope section of Table Mountain National Park. They had diving gear that was confiscated.

December 2021 was also when SANParks inducted the SEAM team. It consists of a K9 unit with six fully trained dogs and a specialised operations centre that supports the management of Table Mountain National Park.

Abalone is a large species of snail found in temperate water environments around the world. They occur in kelp forests and rocky reefs, and play an important role in the marine ecosystem.

According to international wildlife trade monitoring network Traffic, between 2006 and 2016, a total of 96 million abalone was poached in Southern Africa. “On average, two thousand tonnes of abalone are bagged annually by poachers – 20 times the legal take – in an illicit industry estimated to be worth at least $60-million a year,” said Traffic.

About 90% of poached abalone ends up in Hong Kong.

Writing about Ernie Soloman, a gang leader gunned down in 2020, GI-TOC wrote, “In the Overberg, Solomon was primarily an extorter, and sometimes outright robber, of the area’s lucrative abalone and crayfish poaching operations, rather than a major poaching operator himself.”

According to GI-TOC, the rise of abalone poaching coincided with South African gangs bartering with Chinese criminal syndicates for chemicals necessary to produce drugs such as methaqualone. This drug is commonly known as mandrax in South Africa or as quaalude in North America.

“Poaching provides several job roles within the community, from boat skippers, divers, carriers, and middlemen who buy and sell the abalone. Even kids work as lookouts and grandmothers stash abalone in their freezers for a price and the smugglers, taking the snails across Southern African borders and stashing them, before sending them to their final destination, China,” wrote Mike Barron of Cape Radd.

A report by GI-TOC made a controversial suggestion to end abalone poaching by recommending the abandonment of “efforts to control illegal abalone harvesting”. In this it will be “allowing the species to decline beyond levels that are viable for criminal enterprise”.

Although nobody was arrested last weekend, there have been previous arrests and convictions for abalone poaching. In February 2021, Solomon Sauls was sentenced to 18 years imprisonment for corruption, money laundering, and for contravening the Marine Living Resources Act. DM