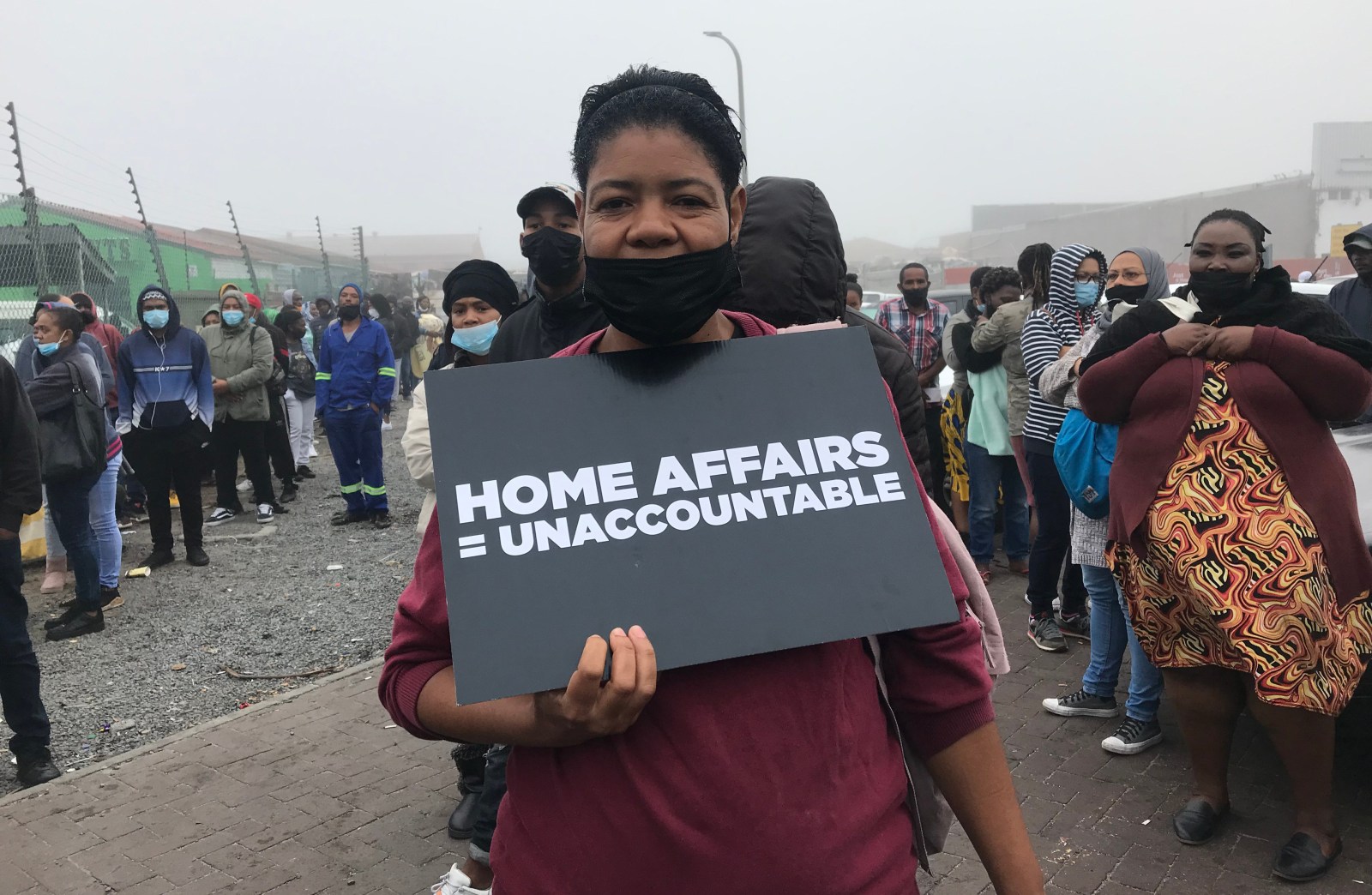 Michelle Lewis, who is five months' pregnant, stood from 3am in a queue outside the Department of Home Affairs in Mitchells Plain, Cape Town. She joined a picket demanding better service. (Photo: Tariro Washinyira)

‘Most of us have been standing here since 3am’ says 60-year-old man.

Over 100 people braved the cold morning drizzle to queue outside the Department of Home Affairs (DHA) in Mitchells Plain on Wednesday. Most were there to apply for identity documents or register births.

At 7am, Home Affairs officials started asking people near the front of the line what assistance they needed. At 8am, security sanitised and allowed the first ten people inside the gate.

Rasheed Galant, 60, who had covered himself with a black plastic bag, wanted to apply for a temporary ID. “I left my home in Lentegeur hurriedly to join the queue and only realised when I arrived around 3am that I don’t have a jacket and it’s drizzling … It’s cold … Pregnant women are just standing here with no assistance or chair to sit on. Most of us have been standing here since 3am,” he said.

Galant, who said he lost his job at a construction company in Hanover Park during Covid-19, said he borrowed R100 to pay for transport for a round trip to Home Affairs.

“I promised to pay it back when I get my R350 [Covid Grant]. I came here two weeks ago, but the machines [computers] were offline. At Sassa they refused to serve me without an original copy from DHA,” he said.

Vandim Willaims said he arrived at 2am to apply for a temporary ID. He complained that people are not treated with dignity at the Home Affairs office, as there was no shelter, seating or toilets available for those who are forced to wait for hours to be served.

“I have seen people sleeping outside DHA offices; others selling their ticket numbers to other people. When Home Affairs officials come in, they don’t even greet. They see us as animals. People are frustrated,” he said.

Nicky Davids, brought her two children to apply for IDs. “Why don’t they suggest that Home Affairs goes once a year to schools to register learners for ID? Now parents are missing work and children missing school. We have to sit the whole day and sometimes without getting service,” she said.

Also at the gates of Home Affairs was a group of protesters supported by Democratic Alliance (DA) members. They were demanding that the office increase staff in order to help more people per day. They also want staff to be professional when dealing with clients, for the long queues to be addressed, and for adequate facilities to be provided for people coming to the office during winter.

Meyer told GroundUp: “We will attend to the memorandum. I still have to go via my principals and then we will respond.”

Home Affairs was given two weeks to respond after which members of the provincial parliament have promised to escalate the matter.

Ricardo Mackenzie, DA Member of the Western Cape Provincial Parliament, said: “We call for an urgent debate on service delivery matters in Home Affairs because when Home Affairs don’t work South Africa doesn’t work … We are sitting with undocumented individuals with no IDs because of Home Affairs’ failure to document people properly. Last year in the parliamentary debate, Home Affairs said they are busy addressing … almost a year later nothing has been done,” he said. DM