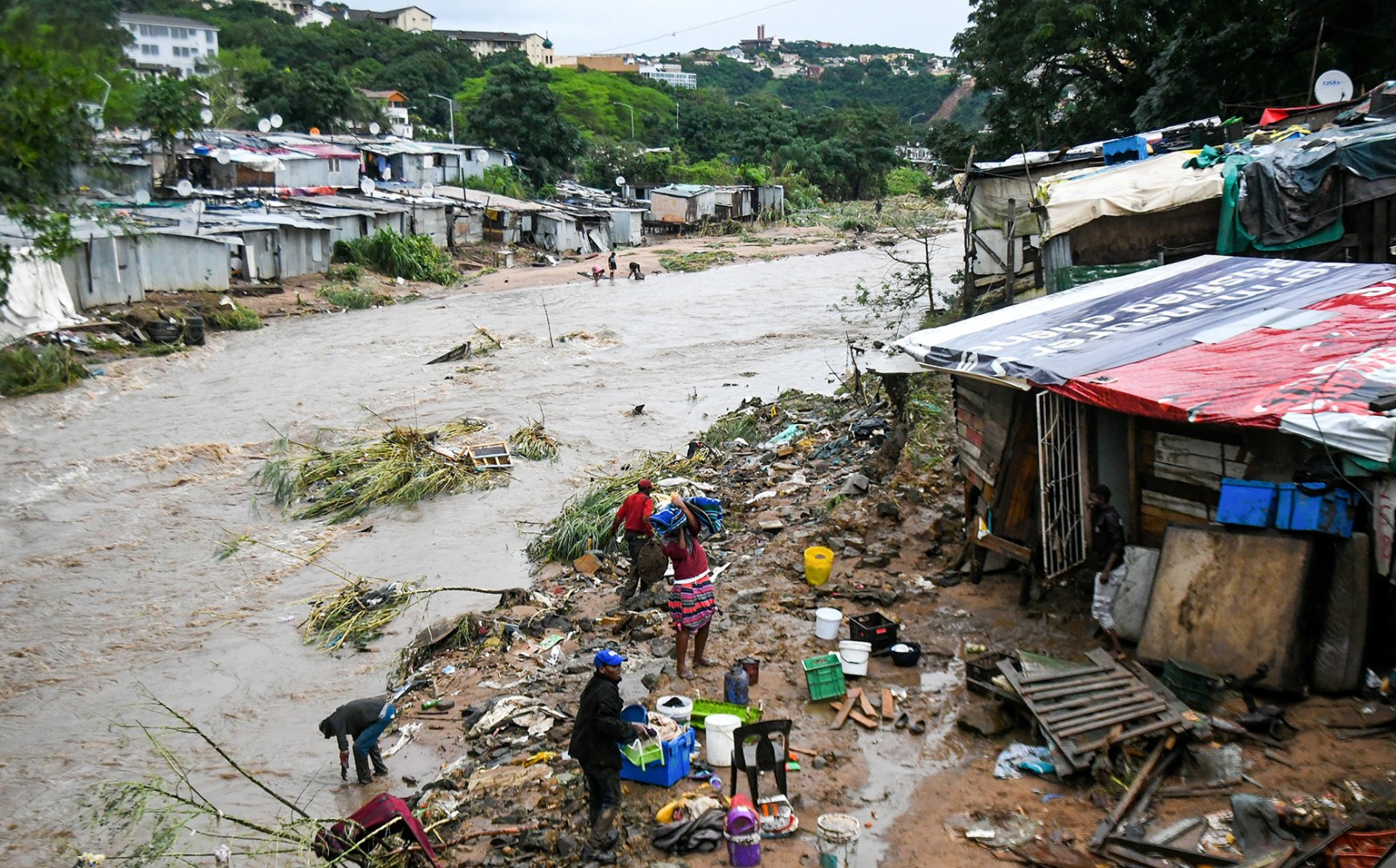 The remains of an informal settlement between M19 and Quarry road on April 12, 2022 in Durban, South Africa. (Photo by Gallo Images/Darren Stewart)

The number of people who have lost their lives has yet to be confirmed but Abahlali baseMjondolo members have witnessed shack dwellers being swept away in the KZN floods.

Shack dwellers’ organisation Abahlali baseMjondolo hase sent out a plea for flood relief support as thousands of people now find themselves stranded without homes or food, while existing with merely the clothes on their backs. The latest reports show that the number of deaths as a result of the floods in KwaZulu-Natal has now climbed to over 300 people with many other people missing.

The now 100,000-member-strong organisation is based in Durban and its members are amongst the worst affected by the flood devastation.

For the last twenty years Abahlali baseMjondolo, whose slogan is ‘Land Housing Dignity’, has consistently campaigned for the rights of shack dwellers to get decent housing and access to services like electricity, water and sanitation. It now have 86 branches across the country.

Reflecting on the destruction of the flood, president of Abahlali base Mjondolo S’bu Zikode said “What we are seeing is unimaginable. It is unbearable when we have to witness people stuck under debris in a settlement like the one on Foreman Road.” Zikode said that part of the reason for the flooding was “the lack of infrastructure upkeep as a result of all the looting in a municipality” as well as the current climate crisis.

In a statement sent out on 12 April, the organisation said “The number of people who have lost their lives has yet to be confirmed but our members witnessed people, including at least two babies, being taken by the water and many people are missing.

“Huge numbers of people have lost their homes and all their possessions and are now entirely destitute. People living near rivers were worst affected. The communal garden at the eKhenana Occupation has been hit hard. Many people have been unable to go to work.”

The statement goes on to say that “We have no one but ourselves as we rebuild our lives. All our settlements are affected but the most affected at the moment are eNkanini, Cato Crest, eKhenana, Ekukhanyeni, Zamokuhle, Foreman Road, Kennedy Road, Briardene, eKuphumeleleni, KwaMamsuthu, Lindelani, Barcelona2 and eKhenana. In all these settlements  people’s homes were washed away.“

Speaking to Maverick Citizen on Thursday after an emergency meeting to determine how best to assist people, Abahlali baseMjondolo deputy president Mqapheli Bonono lamented the plight that people were facing, saying “the situation in Mjondolo is very bad, while people living in shacks generally live under difficult conditions the floods have now made the situation unbearable. People have lost all their possessions as well as loved ones who have died in the floods, they will need counselling to get through the trauma of this situation.

“We are aware that the President has been going around visiting some of the places affected by flooding but we have not seen him, however this is not the time to be pointing fingers afterall we are used to being ignored and not receiving the necessary services from government. We have for years been saying that the conditions under which we live are not right for any human being.

“Right now people don’t have clothes, blankets or even food to put in their stomachs. Just imagine losing everything you have and still having an empty stomach to worry about.”

Bonono said people were also in urgent need of shelter now that their homes had been swept away.

“There are also a number of areas in KZN that do not have water at the moment because of the rain and people cannot afford to buy water, so I do not know how long they will be able to survive without having access to water.”

Bonono said the organisation was therefore making a desperate plea for people to assist in any way that they can. DM/MC