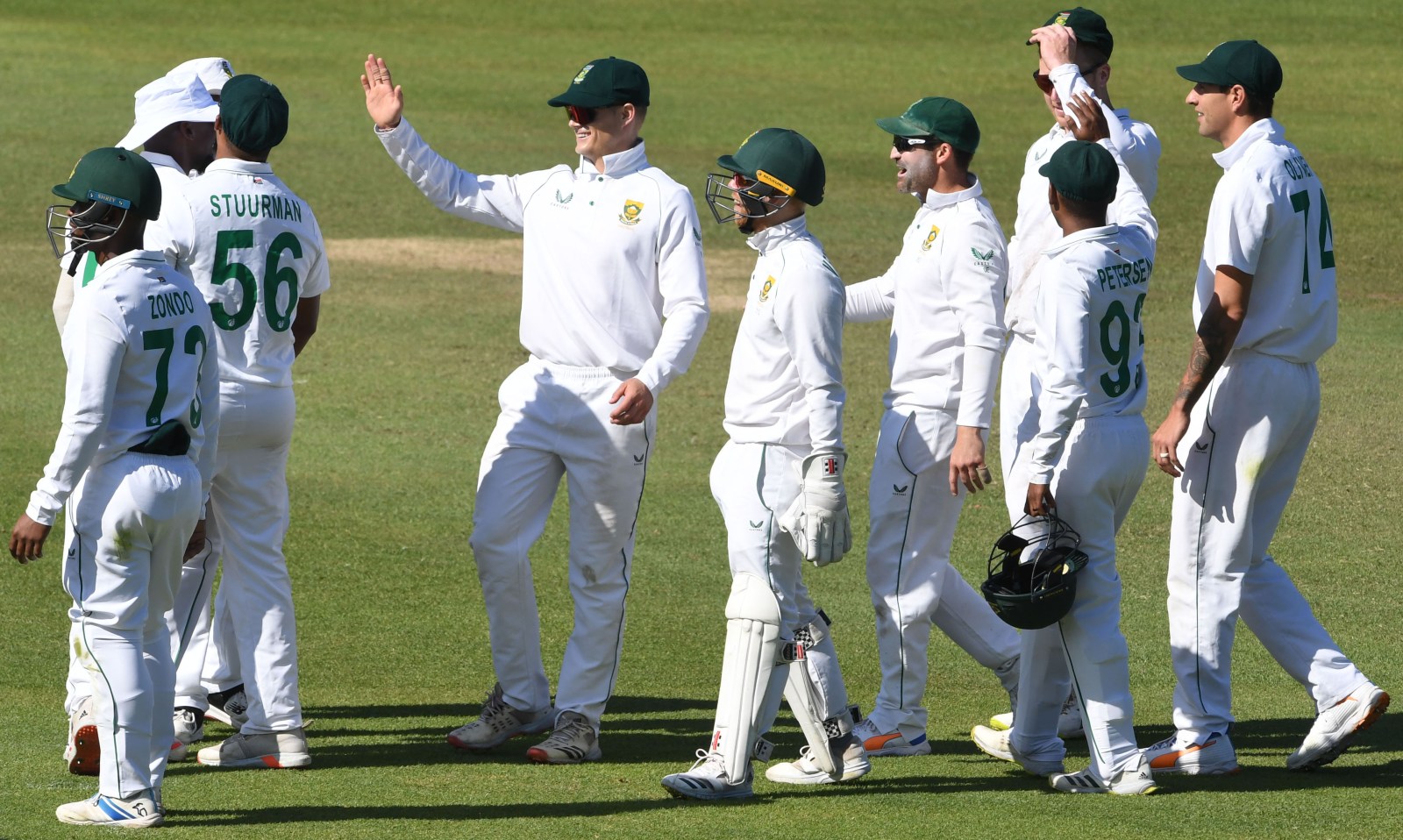 South Africa wrapped up the two-Test series against Bangladesh in emphatic fashion with a 332-run second Test win in Gqeberha.

Keshav Maharaj will want to take the Kingsmead and St George’s Park pitches around the world with him. The left-arm spinner took 16 wickets in the two Tests against Bangladesh at those venues to lead South Africa to an emphatic series win. For good measure he top-scored in the Proteas’ first innings in Gqeberha, contributing 84.

Maharaj spun the tourists into a twist in the fourth innings of the second Test, taking seven for 40 as Bangladesh slumped to 80 all out in search of 413 for victory. They lost by 332 runs after crashing to a 220 run first Test defeat where Maharaj took seven for 32 in the fourth innings there as Bangladesh crumbled to 53 all out. Unsurprisingly, Maharaj was named Player of the Series.

Bangladesh capitulated meekly on day four in Gqeberha, having resumed on 27 for three. They played like a team that had had enough. Loose shot after loose shot allowed Maharaj and Simon Harmer to clean them up. The spin twins didn’t mind batters who played with no application, but it wasn’t a good look for the tourists.

Maharaj became the first man in the history of Test cricket to take seven wickets in consecutive fourth innings’. In both Tests Maharaj and off-spinner Harmer took all 10 fourth innings wickets and unusually were the only bowlers used. It was a triumph for slow bowling in a country that places most store in a barrage of quick bowlers.

“We have a good core of spin bowlers who are not in the Test squad, but they are out there,” a happy captain Dean Elgar said after the match. “We have a good group going forward and Kesh and Simon have been leading the way.

“Having the luxury of one quality spin bowler is great, having two is unbelievable. We have tough challenges coming up, England (July-September) and Australia (December-January) away but if you have a lot of options you give yourself the best chance of winning.”

South Africa scored 453 in the first innings with contributions from most of the top order, although no one reached a century. Elgar scored 70, Keegan Petersen 64, Temba Bavuma 67, and Maharaj 84. In reply, Bangladesh were bowled out for 217 with Mushfiqur Rahim top-scoring with 51. Seamer Wiaan Mulder took three for 25 in 13 testing overs of swing.

Although there was plenty of time left in the match, Elgar did not enforce the follow-on and the Proteas batted aggressively in the second innings, scoring 176 for six before declaring. It left more than two days to bowl the tourists out. They only needed a little under three hours.

“We didn’t perform with the bat and ball collectively as a team, unlike South Africa. Congratulations to them,” Bangladesh captain Mominul Haque said.

“It is disappointing but we have to move forward. Our problem was mainly due to not building partnerships be it with bat or ball. We’d build pressure on one end but would let it be released at the other, and we have to capitalise (on starts) and build better partnerships.”

The Bangladesh rout concluded a successful summer of red ball cricket for the Proteas, which saw them beat then world No 1 team India 2-1 in a home series. They followed that with a 1-1 away series draw against World Test champions New Zealand.

They have won five of seven Tests this summer and the only defeats were on the first matches of both the India and New Zealand series’, which came on the back of difficult off-field circumstances.

Before the first Test against India at Centurion, the Proteas had not played a Test for months and before New Zealand they emerged from a strict two-week bio-bubble without almost no time to prepare.

Against that backdrop, the results have been spectacular in red ball cricket and several players have emerged as potential long-term answers for the Proteas.

But Maharaj and Harmer, both elder statesmen in the team, showed the value of experience as they not only extracted significant turn on two wickets that aided spin, but also significant control.

“I’m really happy that the team crossed the line,” Maharaj said. “The conditions were difficult and did not suit us, but credit to the team for responding well in all disciplines.

“Dean did a great job in leading the team. After not picking wickets in the first innings at Durban, Dean and the coach had a chat and said, ‘you’re doing the right things. Your time will come, there could be a situation in the second innings where you go and take wickets’ and I haven’t looked back since then.”

Before play, the Proteas duo of Mulder and opening bat Sarel Erwee were substituted because they returned positive Covid Tests overnight.

The Proteas invoked the Covid-19 substitution protocol that was agreed between the two (CSA & Bangladesh Cricket Board) teams prior to the start of the tour, and in accordance with International Cricket Council protocols.

CSA Chief Medical Officer, Dr Shuaib Manjra said: “This is an unfortunate situation, but not unexpected after the decision was made to have this tour under the Managed Event Environment (MEE) protocol, rather than the strict Bio-safe Environment (BSE) Protocol as was previously the case.

“This is in line with the country’s policy in revoking the Disaster Management Act with reference to the pandemic, as well the huge mental strain that a bubble environment induces. The two players are currently in quarantine at the team hotel and are under the care of the team’s medical staff.” DM