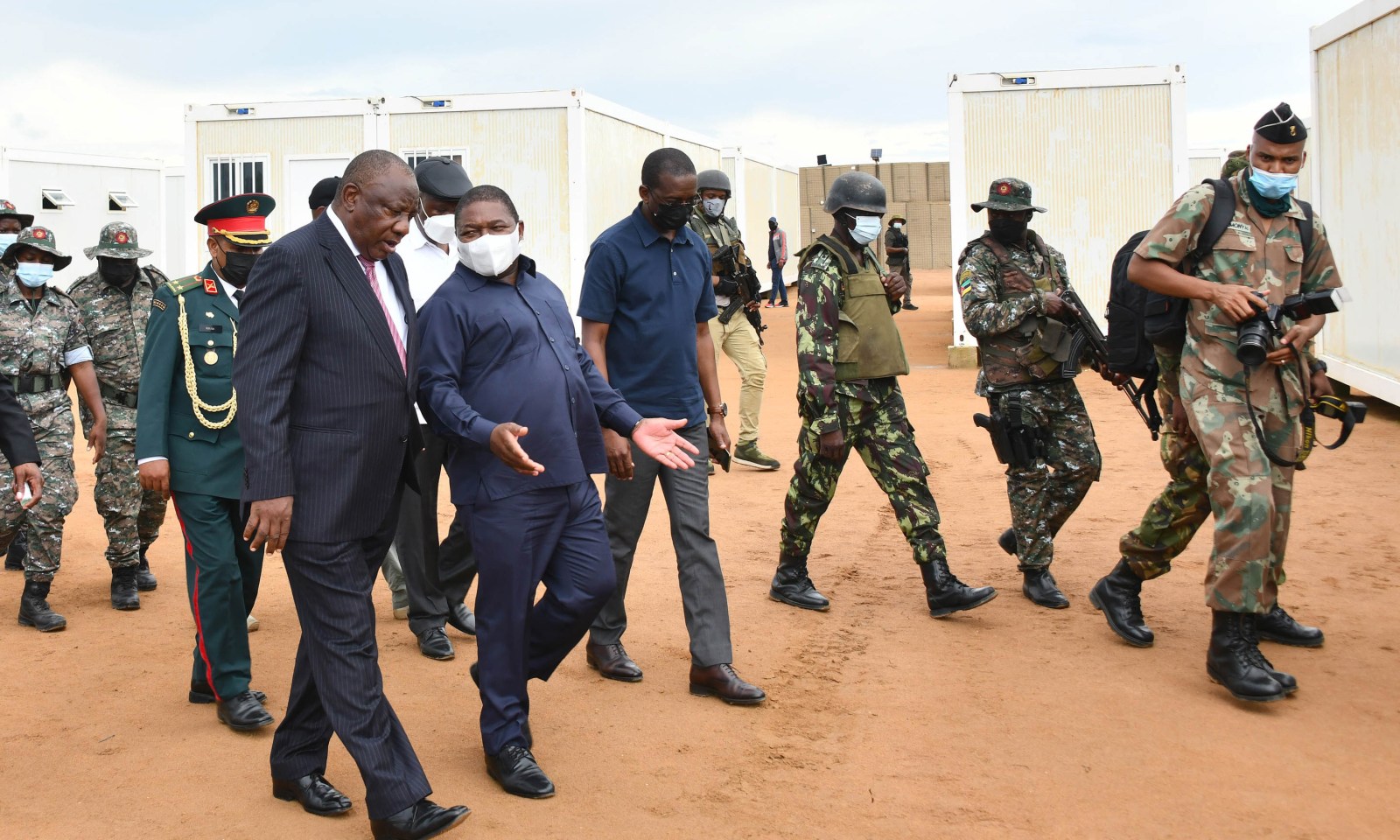 President Cyril Ramaphosa of South Africa and president President Filipe Nyusi of Mozambque visit the military camp during the Working Visit to Mozambique ahead of the 53rd Heroes Day commemoration in Mueda ,Cabo Delgado Province on 3 February 2022. (Photo: Kopano Tlape/GCIS)

All troops in Mozambique must agree on a shared vision to end the crisis in Cabo Delgado.

Troops from Rwanda and the Southern African Development Community (SADC) have achieved some important results in northern Mozambique, where an insurgency has been ongoing since the end of 2017. Some roads have been reopened, and a semblance of calm has returned in key locations for liquefied natural gas projects, such as Palma and Mocímboa da Praia.

However, there are still attacks across the Cabo Delgado province, and the United Nations Refugee Agency has said it would be premature to encourage displaced people to return to their homes.

To resolve the crisis, a joint vision for long-term stability is needed that includes all the forces in Mozambique. Currently, around 2 ,000 Rwandan troops are securing the Palma and Mocímboa districts, which are gas project sites (see map). SADC’s Mission in Mozambique (Samim) is based in three other districts, with Mozambican forces responsible for the rest of the province.

The SADC deployment is noted in official African Union (AU) documents as part of the AU’s African Standby Force. But so far there’s been little communication between SADC and the AU in this regard.

The southern African bloc has only recently approached the AU — six months after the Mozambican deployment and when funds started running out. In doing so, SADC set aside its historical mistrust of the AU and its insistence on the principle of subsidiarity — which means, in this case, that SADC leads on security issues.

SADC has also had no high-level discussions with Rwanda about its presence in Cabo Delgado. Rwanda believes that rooting out terrorism in the province is vital for its own security. Tensions between SADC and Rwanda date back to differences over election results in the Democratic Republic of the Congo in early 2019. Despite overtures by president Paul Kagame to key SADC countries, concerns persist.

On 3 April, SADC ministers of the Organ on Politics, Defence and Security met in Pretoria to discuss the mission with representatives of the main troop-contributing countries and Mozambique. Heads of state are expected to ratify a decision to extend the mission for another three months, up to 15 July 2022.

As has been the case with all SADC meetings on northern Mozambique, Rwanda wasn’t invited. Samim head Professor Mpho Molomo reassured member states that the mission’s troops and Rwandan forces are coordinating on the ground. But there have been no high-level political talks among heads of state of the countries concerned.

Institute for Security Studies research reveals deep divisions in Mozambique over the Rwandan and SADC deployments. Civil society organisations in the country question the transparency and financing of the Rwandan deployment.

The AU could help ensure that ‘African solutions’ for Mozambique are successful. It has experience in this regard, and most of its resolutions highlight the need to deal with issues that drive violent extremism. But member states rarely adhere to these policies, and some see coordination between regional economic communities (such as SADC) and the AU as a stumbling block rather than a benefit.

The first discussion of the AU Peace and Security Council (PSC) on Samim only happened in January 2022, six months after its deployment. The PSC retroactively endorsed the mission and called for funding and material assistance for the force.

SADC only sought AU support when it needed funding to extend the mission’s mandate beyond the first six months. Earlier this month, it finally received an initial €2-million from the European Union through the AU Rapid Response Mechanism. SADC also hopes to access finance from the AU Peace Fund, which has over $230-million from member states’ contributions.

Given its regional focus and attempts at a multi-pronged approach, the Samim deployment is salutary and a first for the region. To succeed though, it needs local buy-in and coordination with Mozambique and Rwanda.

The concentration of vast natural resources in Cabo Delgado raises the stakes. Threats posed by the insurgency to the liquefied natural gas investments worth around US$60 billion saw TotalEnergies suspend its operations last year. The company wants a 30 km radius of security around the projects before it will consider returning.

As the AU grapples with various options for dealing with terrorism across Africa, local contexts must inform decisions, and responses need to be flexible. Coordination among all parties is also vital.

The troops in Mozambique are deployed in one relatively small area where violent extremist groups and locals move around constantly. Joint strategies with security forces pulling in the same direction would lead to a much better outcome. DM