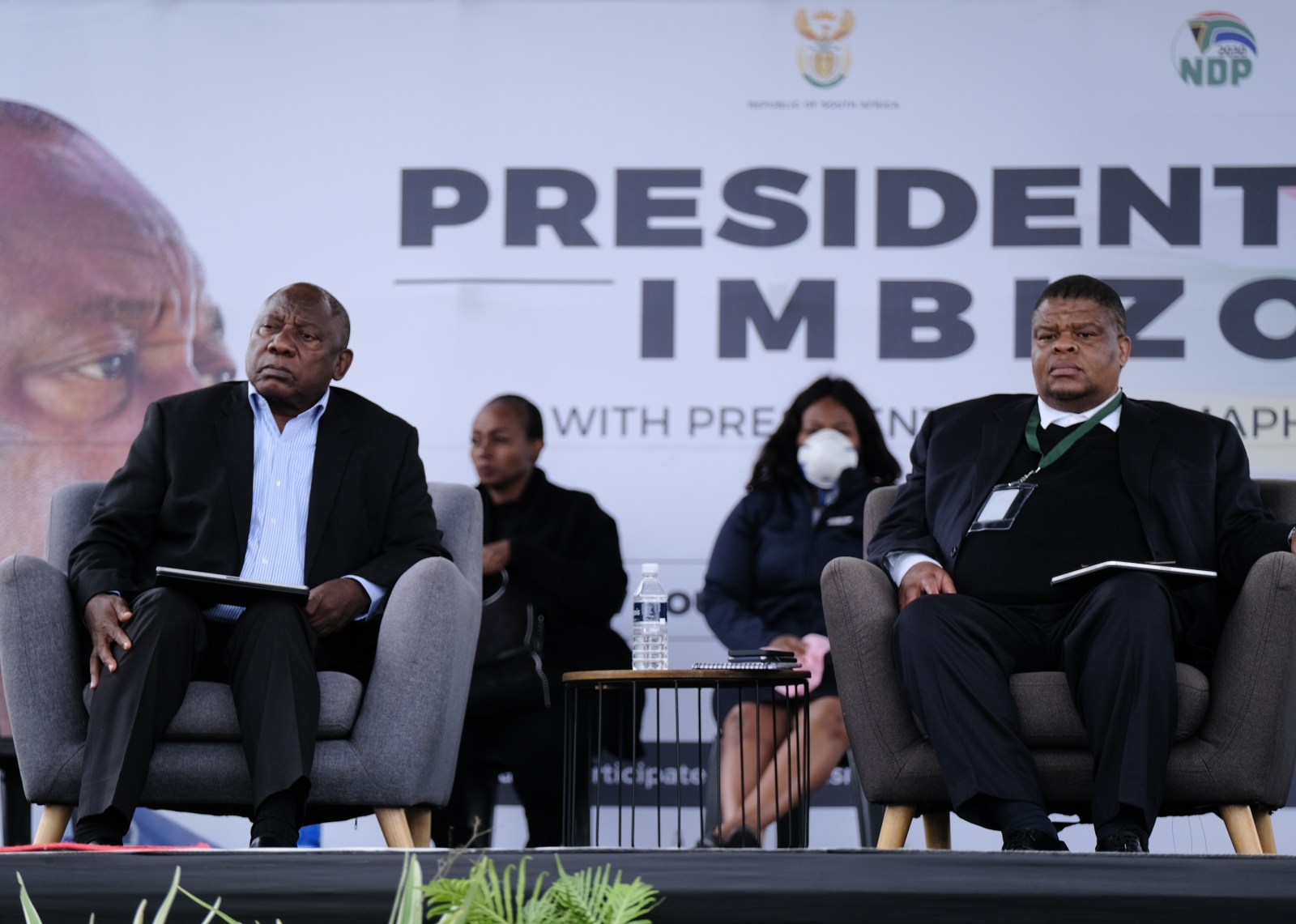 President Cyril Ramaphosa assured residents of the Mangaung metropolitan municipality that the national intervention in the governance of the provincial capital would relieve the dire financial position of the metro.

The President made this promise to residents at a presidential imbizo held on Saturday, 9 April at the Dr Molemela Stadium in Bloemfontein where the President and several members of the national executive and provincial leadership interacted with more than 2,000 people.

In addition, nearly 3,000 participants posted comments and questions on a WhatsApp group created to broaden participation in the President’s visit to the province.

In line with the District Development Model (DDM), which is premised on integrated planning among the three spheres of government and between government and civil society, the government delegation to the imbizo included Cabinet members, DDM district champions in the Free State and the provincial executive, mayors, councillors, and senior government officials.

This was the second post-State of the Nation Address presidential imbizo themed on the President’s Sona call to action, Leave No One Behind.

Cabinet this week approved an intervention by the national executive in the governance of the Mangaung Metro in terms of Section 139(7) of the Constitution.

Following the failure by the Free State provincial executive to implement a financial recovery plan in the metro, the municipality has now been placed under a national intervention.

The intervention is directed at helping the metro improve its finances and deliver on its mandate, and return to sound governance and a better life for residents, the business community and other stakeholders.

As part of the Imbizo programme, the President visited a road interchange that made it more efficient and safer for residents to use two arterial roads that serve the city.

The President also visited the Motheo TVET Artisan College where he talked to young men and women who are receiving artisanal and entrepreneurship training in areas such as visual arts, beauty technology and jewellery design as part of one-year and multi-year courses.

The President encouraged students to follow their passions and pursue entrepreneurship as a means of sustaining themselves and contributing to economic growth. During the mass interaction at the Dr Molemela Stadium, scores of residents from all parts of the Metro were allowed to comment openly and to put questions and complaints to the President and other leaders.

The President then invited ministers to respond to issues residents had raised.

The President welcomed community members’ outspokenness, saying the Imbizo would assist the government to ensure adequate and sustainable delivery of basic services.

“We are honoured that you have heeded our call to become part of the solution,” said the President.

The National Minister of Police, Bekhi Cele, vowed to visit the Free State in the coming weeks to deal with the issue of increasing crime in the metro.

Speaking at the presidential imbizo held on Saturday, Cele said that 550 police officers would be deployed to the province before the end of the year.

This was after confirming that 10,000 trainee police officers were undergoing training.

Residents of the troubled Mangaung Metro requested the national government to build more police stations and increase police personnel due to skyrocketing crime.

‘Mangaung a messed up municipality’

Addressing Mangaung residents from municipal areas including Wepener, Dewertsdorp, and Soutpan, she confirmed the national government would take over the running of the municipality.

Her statement came after the Cabinet announced last week that the Metro had been stripped of its executive powers and placed under administration.

Dlamini Zuma vowed to undertake another visit to the metro after the coming Easter holidays to further deliberate on programmes and the national government’s role in the take-over.

The move by the national government has resulted in much speculation that this might be the final nail in the coffin for the metro, and that its council may be dissolved.

Mangaung pressure groups such as the Mangaung Concerned Community (MCC) have vehemently called for the dissolution of the metro. They allege that the council should be dissolved because it let corruption thrive under its watch.

The metro has been placed under the national government’s control in terms of Section 139 (7) of the Constitution.

This section states that after a municipality fails to make progress in improving its financial and service delivery performance, the Cabinet may decide to place it under national intervention.

This means that the metro can pass only a budget and bylaws. It does not, however, not have the authority to borrow money or appoint employees.

President Ramaphosa has requested that the Minister of Human Settlements, Mmamoloko Kubayi, attend to the needs of a blind, homeless family.

The 50-year-old head of the family, who lives with his wife and three children, said the government had been making empty promises of providing them with their own home.

He also said that blind people were not taken into consideration, especially when it came to issues of transport and assistance in shopping malls.

This followed Kubayi’s response to residents on Saturday’s presidential imbizo in Bloemfontein, on issues including title deeds and asbestos roofing.

Ramaphosa commended the national and provincial departments of Human Settlements for their work in Mangaung.

“The Department of Human Settlements is on the move to build 10,000 houses within a budgetary period. It’s quite a lot of work, and a big achievement, and I want to congratulate our provincial government as well as all other structures of our government that are involved in this,” said Ramaphosa.

These include town planning and the installation of internal infrastructure throughout the Free State.

Kubayi acknowledged that the department had received a report of unfinished projects and as a result, many residents had been left stranded after being placed on waiting lists.

Kubayi had also said the department would have to reallocate some of the money for unfinished projects in Mangaung so that residents received their houses.

This comes after OFM News reported that Kubayi had vowed to deal with lingering issues of housing and subsidies in Mangaung.

Minister of Water and Sanitation Senzo Mchunu announced his department’s plans for taking control of the two portfolios in some Free State municipalities.

Mchunu announced during the presidential imbizo in Mangaung that the department would take over in the Welkom-based Matjhabeng, Qwaqwa-based Maluti-Aphofung and Trompsburg-based Kopanong local municipalities.

In his address, he promised that the department would work on the construction of new pipelines worth at least R500-million, aimed at supplying residents with water.

The move comes after the National Council of Provinces (NCOP) conducted a five-day visit to the province.

Mchunu also vowed to address sewage spillages across towns including Botshabelo. He says this was a huge problem for residents.

“That thing is going to go as soon as we complete two projects, and then, later on, deal with the sanitation issues. We are going to intervene in Kopanong and Matjhabeng, where things have just collapsed,” he said.

In August 2021, Mchunu and his deputy, David Mahlobo, visited the municipality to get first-hand information about water and sanitation in the area.

Mahlobo expressed his disappointment about the poor state of water, sanitation and infrastructure people were still subjected to, 27 years after the dawn of democracy. DM

OFM is a Free State-based radio station and news website.