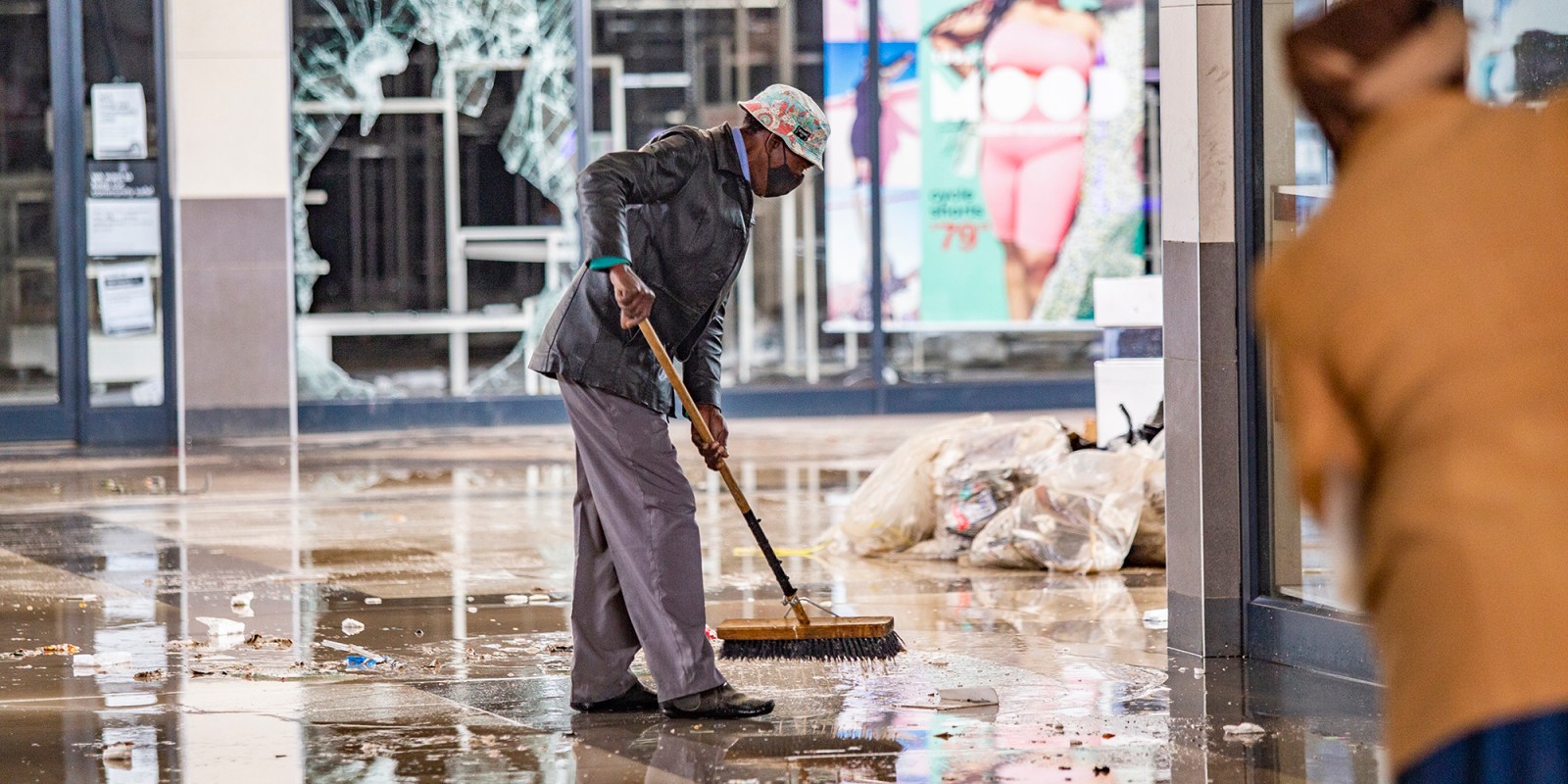 Citizen of Ekhuruleni at the clean-up campaign at Mayfield Mall on July 14, 2021 in Daveyton, South Africa. (Photo: Gallo Images/OJ Koloti)

On the ground, there are countless examples where ordinary citizens are mitigating the damage caused by the populist stormtroopers.

Attending the South African Human Rights Commission (SAHRC) hearings into the July 2021 attempted insurrection, President Cyril Ramaphosa acknowledged exactly who it was that contained the devastating violence and cleaned it all up afterwards.

“It was the people of South Africa who peacefully and within the law worked to restore calm and protect lives, property and infrastructure.

“The assault on our democracy failed because the people of South Africa would not allow it,” said the President on 1 April.

The July attacks, which left more than 350 dead and wiped R50-billion from the economy, came in the aftermath of former president Jacob Zuma’s incarceration after he was convicted of contempt of court.

The violence was fanned by public threats issued by Zuma’s family, supporters and acolytes on social media.

Ramaphosa’s acknowledgement of the pivotal role of ordinary South Africans in warding off an attempted regional coup of sorts is a pretty big deal.

There was no “big man” talk in Ramaphosa’s account of the murder and sabotage of that week, only a tinge of sadness colouring his startling admission that the country had stared into “the heart of darkness”.

Those who had “plotted to destroy this very country we have spent the past 28 years building” had provoked, said the President, “the greatest sense of betrayal”.

But, he added, “try as they might, they did not turn us against each other. To the contrary, South Africans came together as never before.”

Ramaphosa’s view embodies an anaemic remnant of the barely beating heart of some distant ANC that embraced diversity and was a “broad church” of contested ideas that embraced the principles of constitutionalism, redress and redistribution.

But greed got in the way, and rhetoric, and paid spinning firms, while public servants allowed an international criminal syndicate linked to Zuma to steal billions of rands in public funds.

The redistribution happened among the elite mostly.

On the ground, the true South Africans were left vulnerable and shattered by a ruthless epidemic mishandled by a collapsing and corrupt government whose officials ganged up with their friends to embark on gargantuan corrupt PPE-procurement money-stealing sprees.

It is still our position that stealing from your people during a pandemic is a crime against humanity.

During this time and in the epoch before, when Zuma held all the power, the nuts and bolts of the Constitution were tested to their maximum stress as lawfare became a way of life not only for the political elite but also for civil society and the political opposition.

It is this same Constitution that Zuma’s supporters say “stands in the path of majority liberation”.

The Stalingrad strategy, limping along, a zombie haunter of courtrooms, is still being deployed, relentlessly, not only by Zuma, now out on a dubiously granted parole, but also by the Public Protector, Busisiwe Mkhwebane, who currently faces impeachment.

Nationalism globally has reared its ugly spitting head, in the US, Russia the UK and South Africa, and to devastating effect.

The “they” Ramaphosa referred to in his SAHRC submission, the culprits, the agitators and the bloodthirsty, are driven by Saul’s notion of “negative nationalism”.

This, says Saul, is an expression of a national identity or view of the self based on ethnic loyalty and that often includes an appropriation of a god(s), a certain pride in ignorance as well as “a conviction that one has been permanently wounded, irreparably wronged”.

Donald Trump and the Proud Boys as well as the rise of xenophobic, Islamophobic and antisemitic sentiments across the US, Europe and Africa are evidence of this crude nationalism.

In our own state, a region forever stares, vacant-eyed, into the graves of the past. Here, politics becomes archaeological, and a complex future in a rapidly changing world cannot be imagined.

On the other hand, positive nationalism, or civic solidarity, according to Saul, is a state in which one sees the self in the other and your fate bound together.

Positive nationalism, he says, is “a belief in the positive tension of uncertainty and the central importance of choice”.

In such a state, “Citizens feel comfortable with this complexity because they are anchored into a fundamental view of themselves and others as part of a civic commitment.”

South Africa’s diversity, its immediate past and the struggle for a democratic, developmental state with the Constitution as its lodestar are what have held us together.

On the ground, there are countless examples in South Africa where ordinary citizens are mitigating the damage caused by the populist stormtroopers.

Vegetables are being cultivated and shared, potholes are being fixed (in some cases by schoolchildren), food is being distributed by NGOs and citizens, money is collected to help out, here with a funeral, there with school fees.

Ramaphosa acknowledged that at the start of the July “unrest” some may have “sought to agitate for violence and disorder along ethnic lines. We know that the majority of our people have out of principle refused to be mobilised along these lines.”

Tribalism, a manifestation the founders of the ANC “sought to obliterate from the South African political and social landscape, was in this instance rearing its ugly head”, said the President.

A collapse of government provides room for populist parties like the EFF and individuals like Operation Dudula’s Nhlanhla “Lux” Dlamini to leverage grudges, disguised as political objectives or ideology, to create a climate of an eternal threat of violence and chaos, all for personal/political gain.

But South Africans rejected violence, chaos and populism in July 2021.

In January this year, the EFF disbanded its structures in Limpopo, Julius Malema’s home province, because of the dismal results in the November local elections. That is a rather big deal as well.

Should we survive this age of accountability, there is ample left in our political collective DNA to dig us out of the hole that so many leaders have helped to deepen.

Ramaphosa was right to have singled out citizens for our rejection of  violence and sabotage.

For now – love or hate him and his party – Ramaphosa’s was a rare, stable voice (considering the chaos and criminality in the party he heads) undercutting the churn of populist noise and rhetoric.

Counting on ordinary people’s better angels is what is left to the good people who care about South Africa’s future. We certainly cannot count on our governing party any more. DM