SA has experienced rain increases and most dams are full, yet a national water crisis persists 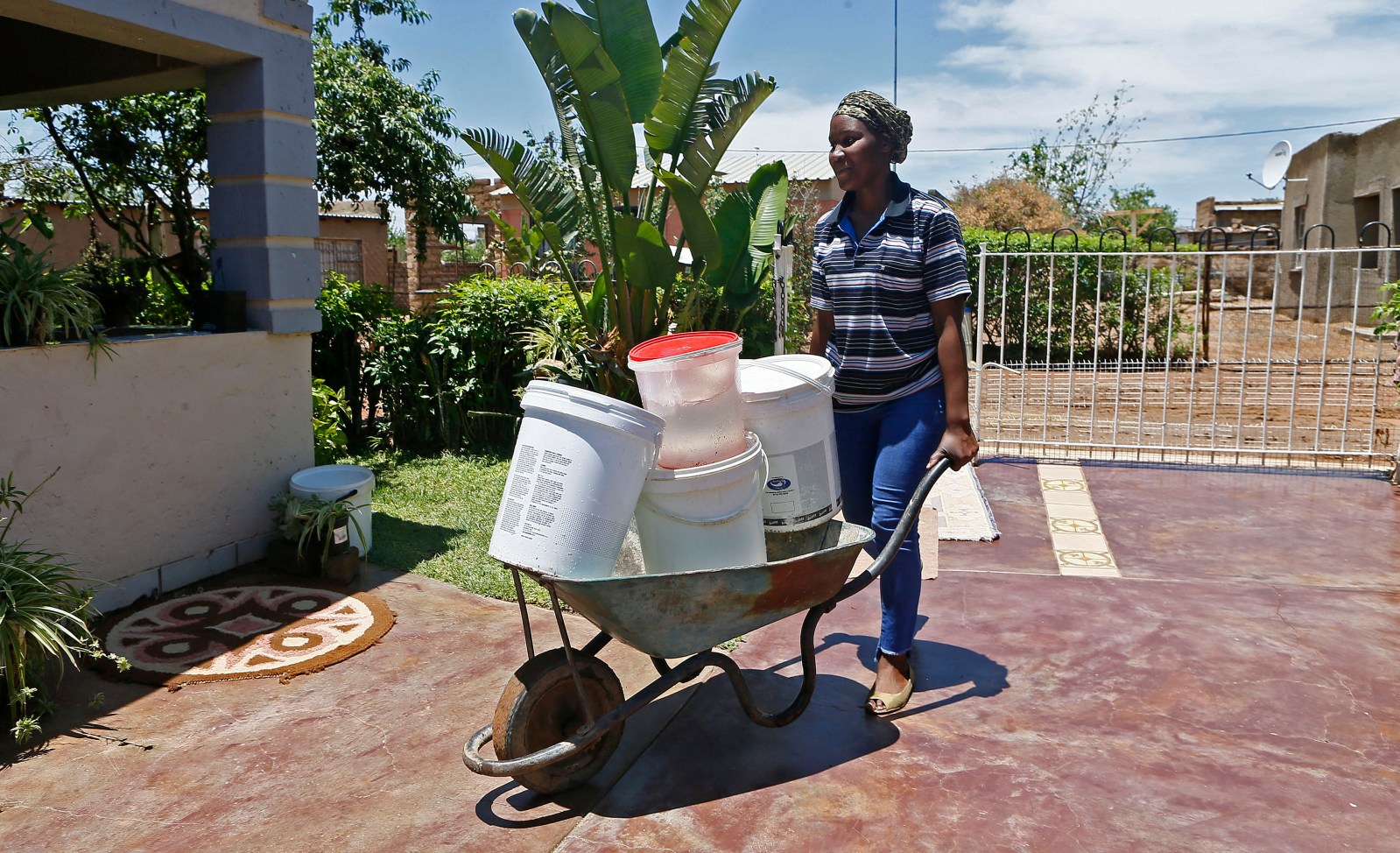 Maria Khoza, a resident of Hammanskraal, pushes a wheelbarrow with buckets filled with water from a water tanker provided by the City of Tshwane, in Hammanskraal, on November 13, 2019. This comes after a temporary shutdown of the Temba Water Treatment Plant (TWTP) as a result of raw sewage sludge leaking from the malfunctioning Rooiwal Water Treatment Works into the Appies River. (Photo: Phill Magakoe / AFP)

The nation might have sufficient supply to meet current demand, but current government estimates show that demand will outstrip supply by 2025, while further predictions show that SA will experience a water deficit of 17% by 2030.

Most parts of South Africa, specifically its summer rainfall areas, have received above-average rainfall since October 2021. This has led to an increase in the country’s national average water levels.

The total percentage of water stored in reservoirs nationally rose from 84.6% in mid-December 2021 to 88.7% at the end of the year. By mid-March in 2022, the national average was 94% compared to 85% for the same period last year, with all provinces showing an overall increase.

The normal national water storage percentage for South Africa is typically between 85% and 80%. The drought from 2015 to 2018 depleted the country’s water storage levels, especially during the first half of 2016 when overall water storage fell below 50%.

South Africa is classified as being “water short” and moving towards “water-stressed” in global terms. The country’s average annual rainfall is 450mm compared to the global average of 860mm. Highly variable rainfall has always led to skewed spatial distribution of water resources.

The skewed spatial distribution is clear when looking at runoff, which is water that drains from the surface of an area into river systems. Only 8% of the country’s land area generates 50% of the volume of water in its river systems – which in turn account for most of the country’s water.

The national storage capacity of major reservoirs in South Africa is currently 33,900 million cubic metres, created by 252 large dams. The country has long passed the stage where water requirements can be met from natural availability alone. Storage of water is essential for securing water supply. It’s also necessary because of the high variability in river flow within and between years.

Despite the recent rains, some areas have still not recovered from continued effects of the drought which has been ongoing since 2015. It’s been described as one of the worst droughts experienced by South Africa in recent times.

Communities, especially in the Eastern Cape province, are still facing water shortages or erratic water supply even though some major dams in other parts of the country are full. For example, the major water system of the Eastern Cape province, the Algoa Water Supply System, containing five dams supplying water to the Nelson Mandela Bay metropolitan area, hasn’t recovered. Its water levels are still at only 17.9%.

This shows that even though South Africa has received above-average rainfall over most of its summer rainfall areas since October 2021, the country’s water resources are still under continued pressure. The primary drivers of this based on the findings of numerous reports and research, include unsustainably high water use and demand, persistent pollution from various sources, misappropriation of funds, collapsing or non-functional municipal sewage systems and a lack of skilled personnel.

Poor water usage behaviour, especially by domestic water users, is a persistent issue. South Africans’ average domestic water use is an estimated 237 litres per capita per day. This is 64 litres higher than the international benchmark of 173 litres. This high use is partly attributed to high municipal non-revenue water. Approximately 41% of water that’s pumped or produced in South Africa is “lost” in a variety of ways before it reaches the water user or customer. This far exceeds the global best practice figure of 15%.

Non-revenue water includes physical losses due to leakage, which is often a result of poor operation and maintenance. It also includes commercial losses caused by meter manipulation or other forms of water theft as well as unbilled authorised consumption. These water losses vary across municipalities and service providers but an estimated average of 35% of physical losses occur in municipal systems.

Continued lack of proper investment in the maintenance of existing infrastructure has led to dilapidated water infrastructure. It’s the main reason for increasing levels of non-revenue water.

Water degradation is also a major issue in South Africa. It contributes to increased water scarcity by causing water resources to be of an unacceptable quality for various uses.

The discharge of mining waste also introduces heavy metals into water sources and agricultural practices — which use pesticides, herbicides and fertilisers — introduce salts, chemicals and other toxic substances into receiving water sources through runoff.

Non-functional municipal sewage systems have created a sewage pollution crisis of varying degrees across the country. More than 90% of the total 824 treatment plants release raw or partially treated sewage into water resources. In 2015, it was estimated that 80% of South Africa’s freshwater resources were so badly polluted that no purification processes in the country could make it fit for consumption.

Sewage pollution isn’t a new issue. It has been ongoing and worsening due to the continuous decline of South Africa’s infrastructure, misappropriation of funds and a lack of skilled personnel to manage water bodies which now requires major intervention.

Persistently high demand for water is driven by poor water usage behaviour, physical and commercial water losses and ecological degradation. All this together with water pollution adds to the country’s water constraints.

South Africa might have sufficient supply to meet current demand, but current government estimates show that demand will outstrip supply by 2025. Current predictions show that the country will experience a water deficit of 17% by 2030. Some research suggests that demand exceeded available yield as far back as 2017. This means the country is already experiencing water stress due to total water consumption already exceeding the amount of total water available. This implies that various water sectors are using more water than what’s available. This unsustainable water consumption is creating a water deficit.

Both the government and the population need to be more knowledgeable about the state of the country’s water availability and quality. The government must improve the overall management of water resources and address the deteriorating infrastructure, poor water and sanitation service delivery and water pollution.

The culture of unsustainable water use and poor management of water resources needs to change. Despite numerous dams overflowing, South Africa needs to take action to avoid a major water crisis in the near future. DM/OBP

Anja du Plessis is Senior Lecturer and Research Specialist in Integrated Water Resource Management at the University of South Africa. She does not work for, consult, own shares in or receive funding from any company or organisation that would benefit from this article, and has disclosed no relevant affiliations beyond their academic appointment.

SA has experienced rain increases and most dams are full, yet a national water crisis persists