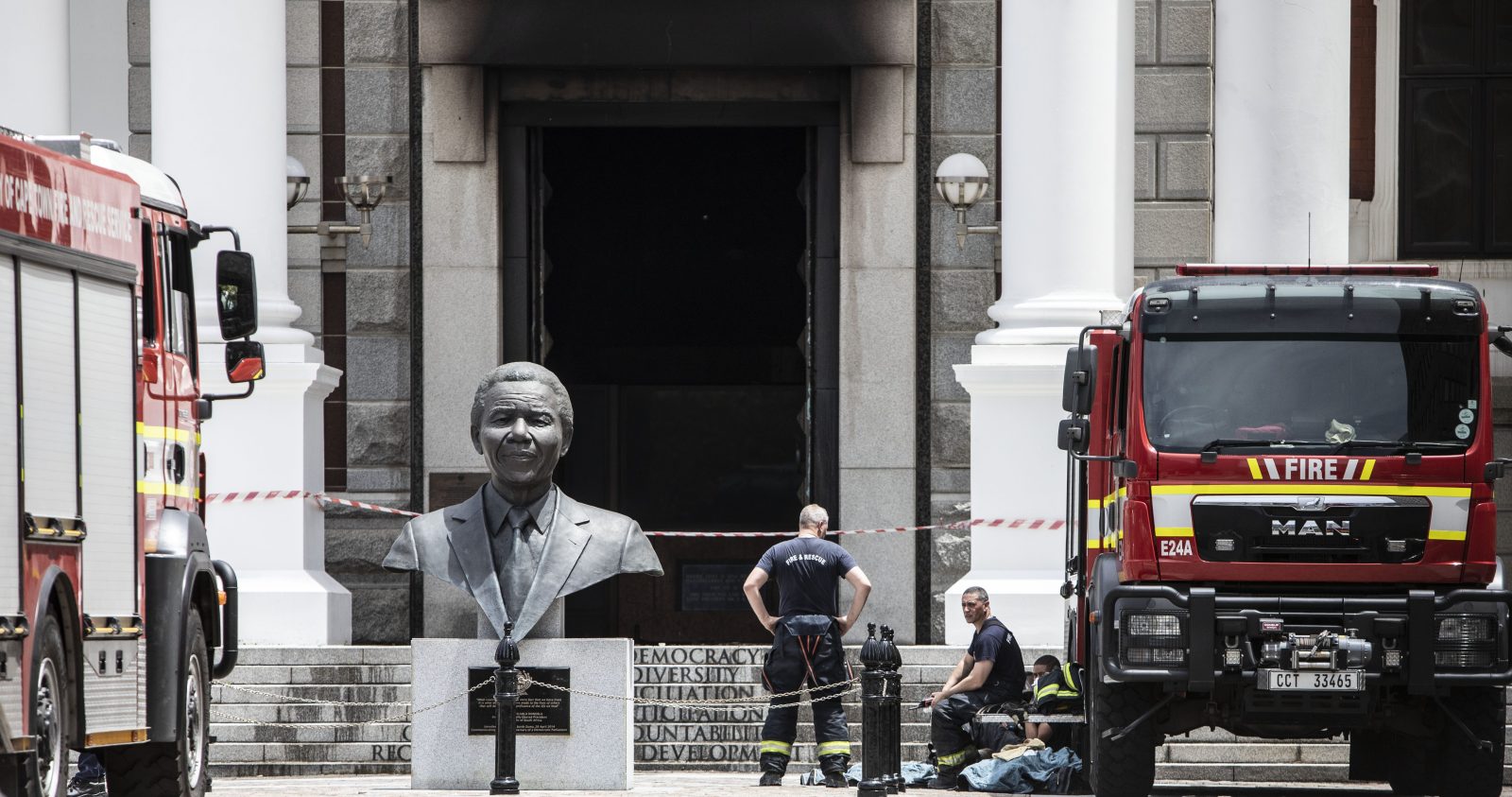 Firefighters after battling the blaze that engulfed the National Assembly in Parliament on 3 January 2022. (Photo: Leila Dougan)

The Cape winter rains are coming. And not a shred of tarpaulin covers the damaged roof and broken windows of the National Assembly. It’s been more than three months since the devastating fire.

Right now, it’s not clear whether the structure of the National Assembly building where most of the damage from the fire of 2 January seems concentrated will be protected from further (rain) damage.

In a briefing to MPs on April Fools’ Day, it emerged that Phase One of the assessment, the “making safe stage”, is only just about complete, although it urgently recommends “to provide a temporary roof to prevent rain causing damage to lower floors”.

Phase Two of the assessment, which quantifies damages and the cost and timeframe for restoration, is anticipated to finish in May. The start of this phase was delayed because the flooded basement was only pumped dry from 29 March, setting off a cascade of delays also in the Phase One report.

Only once the work of both assessment phases is done can the restoration phase begin – if money is available. When exactly that may be remains unknown.

And it almost also remains unknown what the status of assessments is right now after the devastating fire on Tweede Nuwe Jaar (Second New Year). Read Major fire wracks parliament building, raising questions about why no protection services staff were on duty

Because Parliament was a crime scene, the Hawks’ permission was needed before talking about the state of damage and repairs, according to Public Works and Infrastructure Minister Patricia de Lille at the Friday, 1 April briefing to the Joint Standing Committee on the Financial Management of Parliament.

“[Parliament] is still a crime scene,” said De Lille. “We have got an agreement with the Hawks because it is a crime scene that any information related to a crime scene must be approved by the Hawks. The Hawks have looked at the presentation and gave us permission to share this preliminary information with the committee.”

And so it’s now known the fire damage is centred on the National Assembly, from the chamber up five floors, with temperatures having hit up to 900°C, melting metal and damaging concrete.

In contrast, the water and smoke damage in the Old Assembly could be quickly repaired.

Word in the parliamentary corridors has long been that the National Council of Provinces (NCOP) section was hardly damaged, aside from smoke damage, and could easily be repaired for reopening. The NCOP chamber itself is understood to be undamaged.

But for the past three months, everything was left locked up. No one has yet given the go-ahead for a good airing and cleaning to prep for reopening.

Friday’s briefing included a couple of surprises, like the basement fridge posing a serious health risk “with rotten fish and meat”, and the “huge breeding of mosquitoes in water in the basement”.

An extensive to-do list emerged from the Hawks-approved Public Works presentation to MPs. Officially dubbed “updated action register”, it includes not only a temporary roof covering, but also removing fire debris from the buildings and reconnecting services in the undamaged areas for reoccupation.

“Attend to water and smoke damage [sic] areas in building on lower floors (cosmetic works required) for reoccupation of the undamaged areas,” says the action register in the briefing document.

“The DPWI [Department of Public Works and Infrastructure] remains responsible for any work on the structure. The final report from the engineers will determine the overall damage, the cost for rebuilding or repairs and projected timeframes,” replied Parliament spokesperson Moloto Mothapo in a text after a request for comment.

Public Works and Infrastructure did not respond to questions by the requested deadline despite follow-up text messages.

However, De Lille on Friday said further assessment work could only happen after the Hawks formally in writing handed the parliamentary buildings back to her department.

“No scope of work has been determined because we will have to wait until the second phase report that will give us the estimates.”

The bottom line, however, is that “current structural damage does not pose a risk of the collapse of the buildings”.

So, no chance of the National Assembly coming crashing down at the back onto Government Avenue, the tree-lined public path that connects to the Company’s Garden. It’s part of a rare, and historic green spot in central Cape Town where people can spend lunch hours and weekends, and also connects to the National Library.

And yet the SA Police Service blocked off with iron fences marked with yellow police crime scene tape this public green thoroughfare from the “Arch for Arch”, a tribute structure for the late Archbishop Desmond Tutu, along the back of the National Assembly and beyond, also past Tuynhuys, the presidential offices on the parliamentary precinct.

The Government Avenue public space has long been a bugbear of the securocrats.

As far back as September 2018, SAPS generals moved to restyle Parliament, or the People’s Assembly, into a government installation, (mis)using the suicide of Lennox Garane, who had shot himself in his parliamentary office on 14 September 2014 in protest against 18 months of sustained workplace bullying (SA Police push to ‘safeguard the Parliament’ alarms MPs).

“The primary aim of access control is to safeguard the Parliament as a strategic government installation and to ensure the safety and protection of VIPs within the parliamentary precinct,” said the SAPS presentation to MPs on 26 September 2018, talking about CCTV cameras, vehicle search areas, asset tracking and perimeter fences.

More than 90 cameras have been in place for years now across the parliamentary precinct. But heritage restrictions denied the SAPS its push for a higher fence or wall to replace the 1.2m-high trellis alongside the back of Parliament abutting Government Avenue and the Company’s Garden.

The fire at the National Assembly handed the securocrats the means to get their way.

More recently, in late March, further security changes buzzed on the parliamentary grapevine – all of Parliament had been declared a National Key Point.

“Parliament was declared a National Key Point in 2018. The NKP Act requires that all the security personnel are Psira-accredited,” says a document seen by Daily Maverick. It’s understood to have been circulated in late March 2022.

Exactly when in 2018 such a declaration would have been made is unclear. In the 26 September 2018 briefing to both the parliamentary police and public committees, only an oblique reference was made.

“Parliament is a National Key Point … There’s certain information we don’t share in public because of the presence of the media. When it comes to national security issues, we plead with the committee not to have to share [details in public]…” said the then SAPS national commissioner Lieutenant-General Khehla Sitole.

But nothing else was said either by the police boss or Police Minister Bheki Cele.

The last public status dates back to January 2015 when the Right2Know Campaign successfully got then police minister Nkosinathi Nhleko to release the list of National Key Points.

Then, just the ministerial office block at 120 Plein Street and the presidential Tuynhuys offices in the parliamentary precinct and the chamber were National Key Points. Read Parliament: Security grip at the National Legislature

Regardless of twists on the security front, the 2 January fire has made more complex how Parliament conducts its business – particularly as the National State of Disaster has been lifted, if not all Covid-19 restrictions.

Thoughts of holding the traditional Budget vote debates fully in person in May were ditched recently by the programming committee. Not enough safe spaces as these debates run up to eight a day. Committee meetings have been held online and plenary sittings in hybrid physical and online sessions over the 739-day Covid-19 lockdown.

“At this point in time the focus really is on the assessment of the damage caused by the fire,” said National Assembly Speaker Nosiviwe Mapisa-Nqakula in Friday’s committee meeting.

“Issues of relocation of Parliament, if needs be, issues of either restoration or rebuilding of Parliament, [these] are issues which we can only start discussing as South Africans once we have had an understanding, a picture of how much we can do with what is left out of the ruins of Parliament.”

With no temporary roof, the clock is ticking. The Cape winter rains are coming. DM