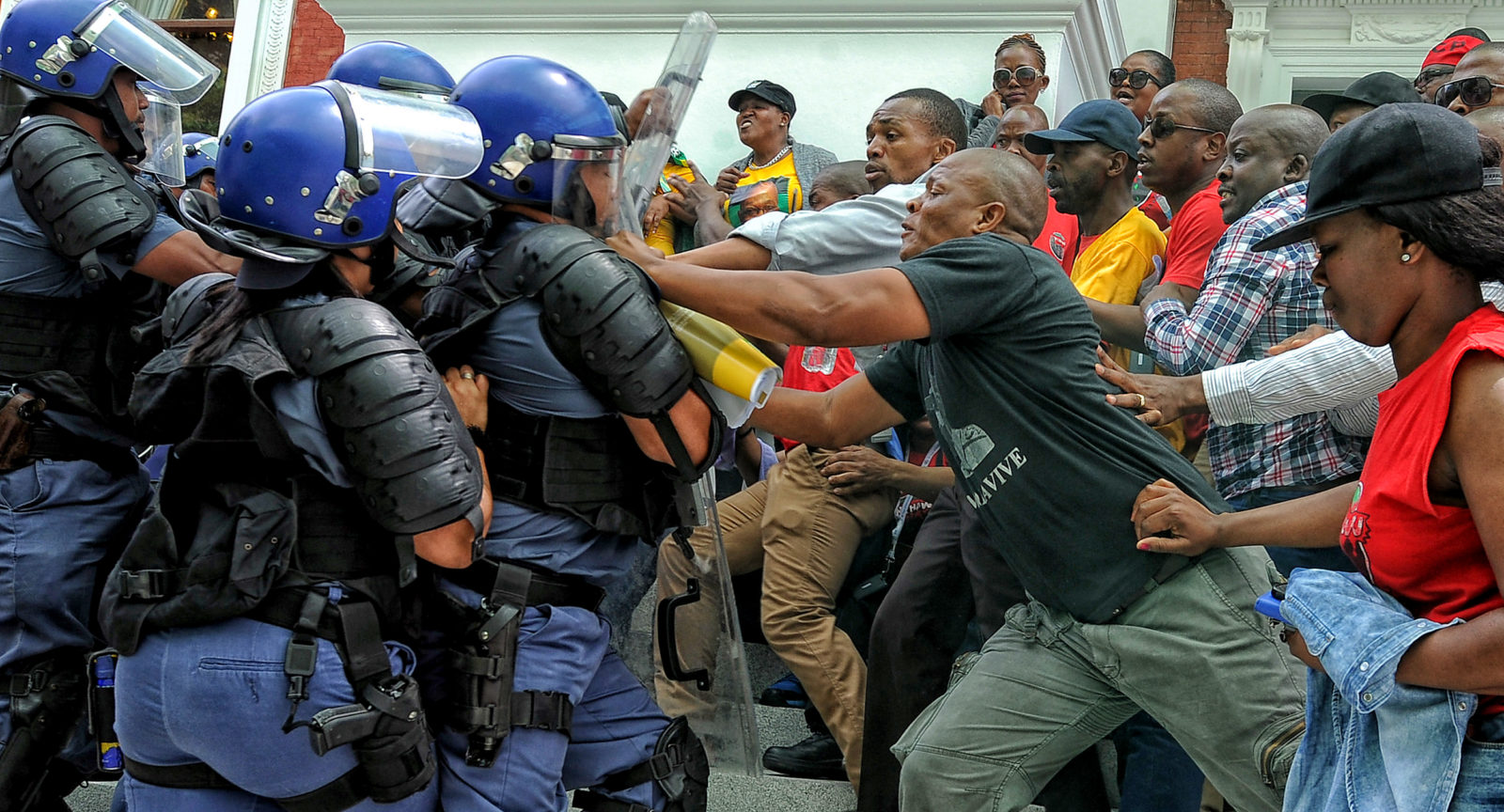 The SAPS’s play to “safeguard the Parliament as a strategic government installation and to ensure the safety and protection of VIPs within the parliamentary precinct” was halted by MPs, warning against ‘militarising’ the People’s Assembly.

Wednesday’s meeting between the police and public works parliamentary committees, Police Minister Bheki Cele and SAPS top brass was called after a firearm got through existing security checks. Arguing for first getting right the security already in place, ANC MP Leonard Ramatlakane cautioned: ‘Let’s not use a sledgehammer to kill a fly!’

“Security Breach Parliament 14 September 2018” was how the SAPS presentation to MPs on Wednesday described the suicide of senior parliamentary manager Lennox Garane. Much of the focus was on the gun, and how “Gerane”, as the SAPS PowerPoint presentation incorrectly called the international relations division manager, showed his official permit to a police officer on duty and “walked through without placing his bag though the X-ray machine”.

That day Garane had shot himself in his office in protest over some 18 months of workplace bullying, according to his suicide note – “It’s a protest suicide”, it said – and according to his family, who both at the memorial service and through a pamphlet at the weekend funeral spelt out in blunt and unmitigated detail how and who at Parliament had failed him after lodging the grievance.

Parliament on Tuesday said it “wishes to caution against the publication of names of individuals in connection with untested allegations as this borders on irresponsibility and may also be defamatory”, pointing out in its official statement that an investigation is under way.

For the SAPS on Wednesday, that a gun slipped past existing security checks solicited two responses. The one, a six-page list, with photos, of security deficiencies such as broken scanners, misaligned cameras and lack of special security zones like the presiding officers’ offices at Parliament. The other, a push to take over security at Parliament. And that included the SAPS “screening of the person who seeks access to determine if the person is a legitimate visitor and whether his/her reason for visiting the premises is a valid one”, alongside the “search and examination” of a person and vehicle for any possible harmful items.

There was no word of what would be done to ensure the existing security measures, like scanners and X-ray machines, would be in full working order. But from 1 October, the SAPS told MPs, enforced access control measures would include subjecting all permit holders (that includes MPs, staff, media and others) to a screening process and a required declaration to a “designated security official” as to whether a permit holder has a firearm or other harmful object, although it was unclear whether that would happen on every entry, or just once, for example, to have a statement on file.

It was these provisions, and the attitude that access to the People’s Parliament and security at what the SAPS regarded as a government installation was a “dilemma”, that sparked MPs concerns.

His call instead was on the SAPS and Public Works to focus on making sure scanners and the like were working, while ensuring police on duty did their jobs without fear or favour. This was an echo of what Freedom Front Plus MP Pieter Groenewald pointed out about “static protectors with earphones in their ears listening to cellphones. They don’t even realise who’s passing…”

The Constitution in Section 59 and 72 respectively enshrines the National Assembly and the National Council of Provinces (NCOP) not only to facilitate public involvement in law making and parliamentary processes, but also to “conduct its business in an open manner, and hold its sittings and those of its committees in public…”

The Constitution allows for “reasonable measures” to be taken to regulate public access, but also stipulates the National Assembly nor NCOP “may not exclude the public, including the media, from sitting in a committee unless it is reasonable and justifiable to do so in an open and democratic society”.

Parliament as a whole is not a National Key Point, even if that’s where the prevailing inclination is, as just three areas within the precinct are officially declared as national key points – the presidential Tuynhuys offices, the ministerial offices at 120 Plein Street, and the House.

The 2004 Powers, Privileges and Immunities of Parliament and Provincial Legislatures Act puts the presiding officers firmly in charge of the parliamentary precinct. Security services such as police may enter the parliamentary precinct for any policing function “only with the permission and under the authority of the Speaker or the Chairperson” – unless there is “immediate danger to life or safety of any person or damage to property”.

It’s been established practice since the democratic Parliament was sworn in shortly after the 1994 elections that not even court papers or summonses can be served at the national legislature without express permission from the National Assembly Speaker or National Council of Provinces (NCOP) chairperson.

That Parliament is not just another government installation, as the SAPS argued on Wednesday, is an important point: as lawmakers, with parliamentarians elected as the people’s representatives, Parliament is one of the three independent spheres of the state. The police are part of the executive arms of the state – and an argument could be made that dependence on police would amount to an intrusion of the executive onto another sphere of state, the legislature.

In democratic South Africa, Parliament has had its own protection services, which led security at the institution, including co-ordination of the seconded uniformed police assisting at the various gates. However, there has been no permanent head of the Parliamentary Protection Services since July 2015.

But security at Parliament has been contested terrain amid a push by securocrats, particularly in recent years. This has burst into the public eye, like the signal jammer debacle of 2015 State of the Nation Address, or the longstanding grievances over the presence of State Security Agency (SSA) operatives by Parliament’s largest union, the National Education, Health and Allied Workers’ Union (Nehawu).

Or, more recently, the involvement of the SSA in the investigation of Garane’s suicide, as Parliament announced in a statement last week. Or Wednesday’s comments by SAPS national police commissioner Lieutenant-General Khehla Sitole, arguing that the moment a crime takes place, police are in charge.

His comments stand at odds with the provisions of Section 4 of the 2004 Powers, Privileges and Immunities of Parliament and Provincial Legislatures Act that require security services to obtain permission to enter the parliamentary precinct, unless there is an imminent threat to life, safety or property.

If Wednesday’s meeting showed anything, it was the inconsistencies of implementing security measures already in place, and consistent compliance with those.

Parliament is meant to be a gun-free zone and there are lockers for guns at every entrance – Ramatlakane asked whether those are actually used – but it appears the gun-free zone does not seem to apply to all as, for example, ministerial bodyguards are allowed to carry their guns, as do presidential protectors.

Yes, said Police Minister Bheki Cele, he knew about the “Do you know who I am?” attitude to avoid security checks in Parliament, or gain access without the official permits. That “Do you know who I am” put the police on duty, mostly constables, under pressure, unfairly. And the minister’s appeal was for all – members of Parliament, and managers there – to comply with the security rules.

That emerged clearly when the minister and commissioner shared reservations discussing security at Parliament in an open committee meeting.

“Parliament is a National Key Point… There’s certain information we don’t share in public because of the presence of the media. When it comes to national security issues, we plead with the committee not to have to share (details in public)…” said Sitole.

Cele later agreed, telling MPs he’s been getting messages from “security experts sitting at home watching this (meeting) too many details” are discussed.

“There are too many people listening to us.”

What was shared was that an (unspecified) number of scanners and X-ray machines are not working in the precinct (no location provided), that a total of 334 police officers are assigned for static protection at Parliament and that the perimeter fence was just 1.2 metres high with limitations on changing it due to Parliament’s historical heritage protected status.

And none of that really was something that could not be discovered on a visit to Parliament, whether on a visitors’ tour or to attend a committee meeting or sitting of the House. DM