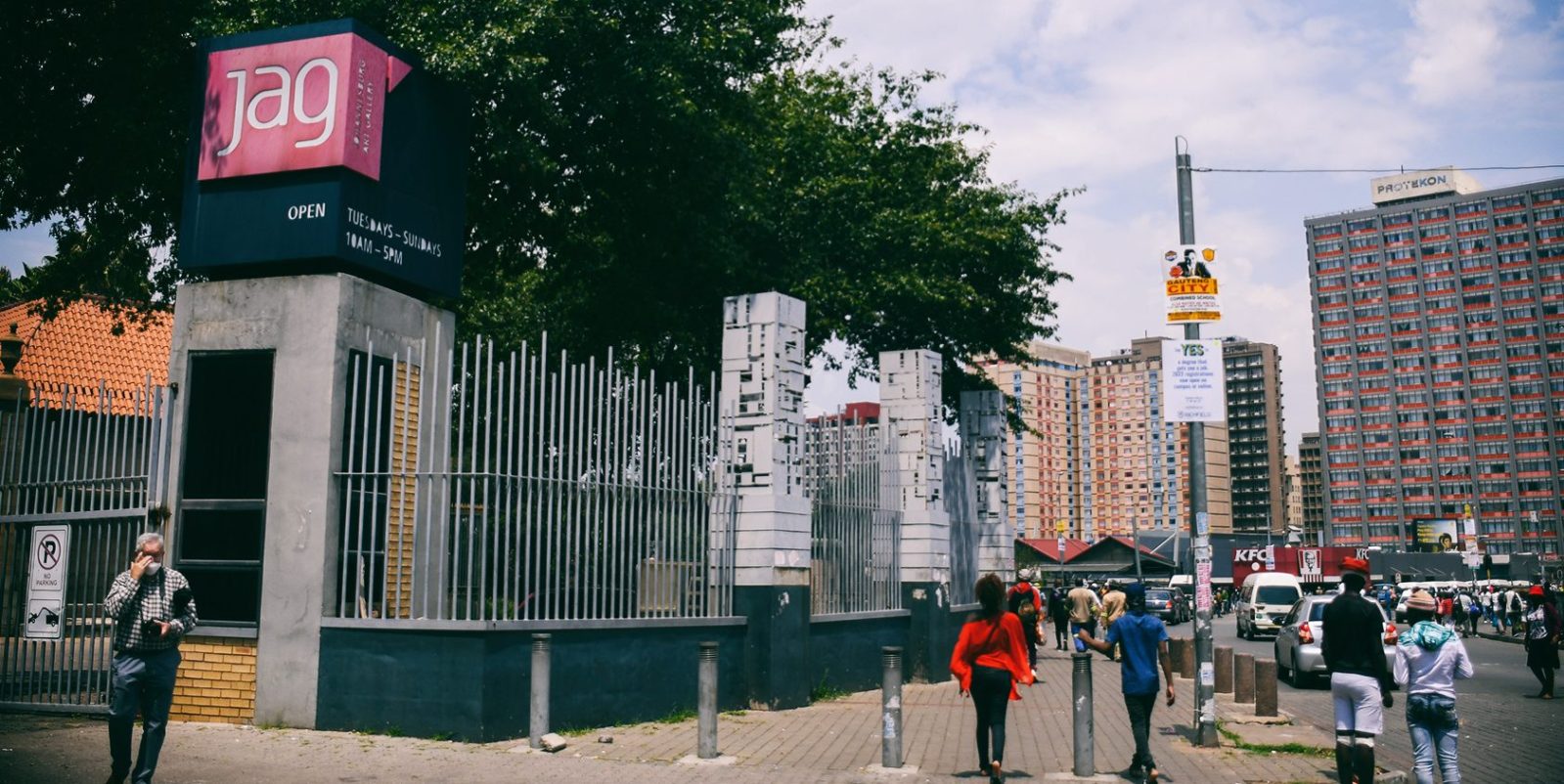 The entrance to the Joburg Art Galley in Johannesburg, South Africa, on 18 February 2022. (Photo: Julia Evans)

The Johannesburg Art Gallery has housed some of the greatest works from around Africa and the world for over 100 years. But, as with many heritage sites and museums in our country, its future is at risk.

Daily Maverick has previously reported on the state of the Johannesburg Art Gallery (JAG), once a prominent, popular gallery in the hub of the city, now slowly decaying.

The City of Johannesburg, responsible for the maintenance of the gallery, convened a stakeholder meeting on 25 March where plans for the restoration of the JAG building and the Johannesburg council’s commitment to funding the long-term project were floated for the first time publicly.

Architect Brian McKechnie, who attended the meeting, told Daily Maverick: “They’ve identified that the building is in really critical condition and that they have to undertake major works to it. And to protect the works, they need to move them off-site and store them safely and create a satellite gallery.”

City spokesperson Nthatisi Modingoane told Daily Maverick that a team of structural engineers commissioned by the Johannesburg Development Agency (JDA) – an implementing arm of the municipality – conducted an assessment of the state of the building in the latter half of 2021.

“From the report, we are now able to diagnose the problems properly and to prioritise future interventions appropriately,” said Modingoane.

The JDA has commissioned SAJ Architects, headed by architect Kylie Dickson, to work on the JAG buildings.

Eben Keun, a volunteer at Friends of JAG for over seven years, told Daily Maverick, “I believe the collection has to be moved to have the building renovated. The building has deteriorated too much to renovate it with the collection inside.”

Modingoane said “we are looking into the viability and cost implications of a number of possible sites that could serve as temporary storage for collections that are at risk”.

There is speculation within the local art community that the collection might move to Anglo America’s head office in Marshalltown. However, Anglo spokesperson Sibusiso Tshabalala told Daily Maverick that it’s “speculative at this point” to say if and when they can house the collection.

According to Modingoane: “At the moment, we are engaged in a process of exploring all possible avenues of safeguarding the future of the institution, including possible PPPs [public-private partnerships].”

While a potential plan seems to be to move the collection to a satellite gallery or galleries for safekeeping while the original buildings are restored, some think the JAG should move permanently.

McKechnie said the location was problematic: “You can spend a billion rand fixing the gallery, but you still have the disaster of unmanaged taxis, lack of bylaw enforcement, urban decay…”

Steven Sack, director of arts, culture and heritage for the City of Johannesburg from 2004 to 2011, told Daily Maverick that he’d been trying to move the JAG out of Joubert Park since 2010 due to safety concerns for patrons walking, driving or using public transport to the gallery.

Sack said their opposition made sense as “everybody loves the Lutyens building – they want that kind of a grand building for an art gallery”. The iconic Lutyens building was designed by English architect Edwin Lutyens and completed in 1915.

Jillian Carman, a curator at the JAG in the 1980s and 90s, research associate in the Wits School of Arts, and author of “Uplifting the Colonial Philistine: Florence Phillips and the Making of the Johannesburg Art Gallery”, is particularly passionate about the Lutyens building.

She agrees that parts of the collection should be moved to a temporary storage space, with perhaps a satellite museum, but believes the premises should be restored and the collection returned, because of its local and international significance and its unique position in Joubert Park.

“The building continues – and has always done so, even during the current brouhaha – to display superb exhibitions.

Keun agreed that it would be a pity for the JAG to relocate considering the history of the building and the fact that Joubert Park is one of the most visited in the city.

“But in order to protect heritage and legacies, one has to decouple the collection from the building at this point. And ensure it is in a safe space to be digitised, audited, restored and preserved.

“Right now, you literally have sewerage backwashing into a building, and rain flushing into it with not much standing between water and the most valuable art collection on the continent,” said Keun.

Keun said that what is needed for the sustainability of the JAG is a social compact between all partners.

“Our president says it over and over again – we have to form social compacts around different parts of society. And the JAG is one example of this.”

Modingoane said their vision for the future of the JAG is “brighter and more inclusive than its past”. This will be achieved by ensuring whatever facility the collection is in allows for expansion, offers more opportunities for marginalised members to participate, and develops a healthy relationship between the institution and stakeholders.

“This is particularly relevant in the context that the JAG has to account for historic exclusions, neglect and discriminatory practices,” said Modingoane.

Art and the post-colonial context

“I think because the institution is still perceived by many as a colonial imposition, its value to our heritage is lost,” said Anitra Nettleton, Emeritus Professor at the Wits School of Art and Wits Art Museum.

“Its educational value is also immense and various institutions have, over the past century, used its spaces and its collections as resources for their students.”

Modingoane told Daily Maverick, “While we are undertaking the work of steering our collection policies, our research and knowledge production, as well as our public programmes towards a more rigorous and critical engagement with our times, we ought to also revisit the historic artworks and shine a more critical spotlight on those works and what they mean for us today.

“This, we believe, is how we should put substance to the rhetoric of decolonisation.”

Previous JAG director Christopher Till said “museums worldwide are … having to reconsider how they operate within contemporary society.

“The construct of a traditional museum – which just collects, conserves, restores, educates – has moved to being far more integrated within social issues and communities, and more accessible in a way where collections can be accessed by a new generation.” DM