Once vibrant Joburg Art Gallery is crumbling into ruin 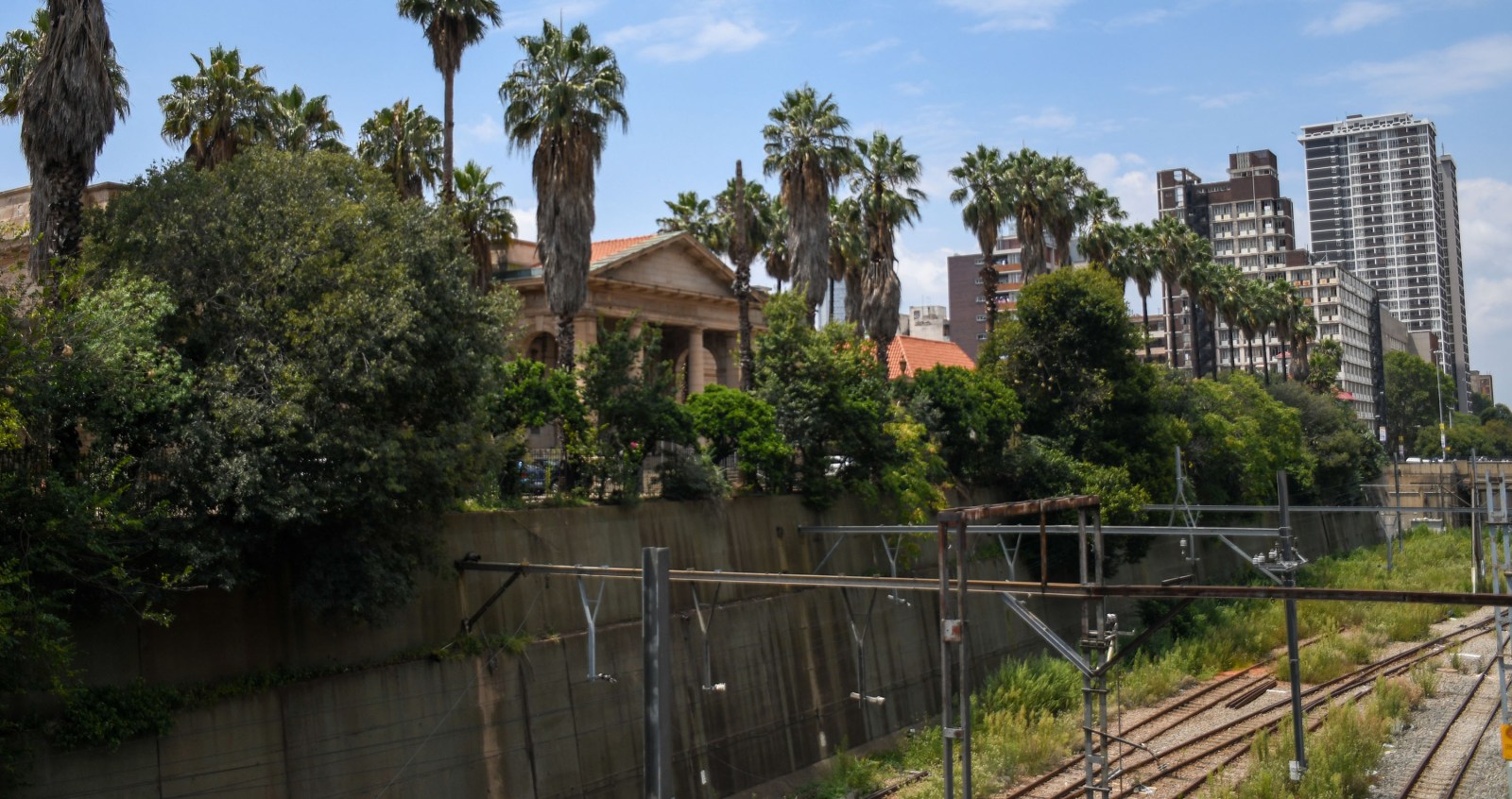 ‘It was like walking into a graveyard. Something which had once been gleaming and energised, into something which has collapsed to ruin,’ said Christopher Till, director of the Johannesburg Art Gallery in its heyday (from 1984-1992).

A month ago, Christopher Till visited the Johannesburg Art Gallery (JAG) after a colleague told him to check out how the gallery — thought to house the biggest art collection on the continent — had deteriorated.

“I was devastated. I mean, it’s the same sort of feeling when you see the tragedy of wonderful buildings being blown up in Ukraine.”

Till said there was one guard at the door, and some of the galleries were closed off, while the ones that were open didn’t have lights on.

“I know the building, so I was able to have a look around. And what I saw was an absolute travesty,” said Till, describing how the west pavilion, which was closed off, had water pouring down the walls from the rain outside and was filled with old furniture and dilapidated, empty showcases.

“The entire ‘new’ gallery underground was sealed off and completely empty, with the screen walls lying around stacked on the floor and [they] were extensively water-damaged,” said Till.

The JAG is partly housed in the Lutyens Building, one of the oldest buildings within the South African art establishment, built in 1915 in Joburg’s inner city near Joubert Park.

Once “gleaming”, the JAG is beginning to reflect the decay of the surrounding area.

An empty parking lot greets visitors and at first glance, all seems in order in the gallery.

But visit on a rainy day and the disrepair becomes apparent.

Several leaks and cracks are visible in the Phillips Gallery. Lights do not work, windows are grubby and pigeon droppings are splattered on outdoor sculptures.

“This, sadly, is where many of our public museums in South Africa are presently being compromised, with the collections inside of them being imperilled,” said a former curator of historical art collections at Iziko Museums of South Africa, who wishes to remain anonymous.

“Leaking roofs, ageing wiring and lighting systems and other lapses put our valuable collections at risk from damage caused by damp and fire.”

Till said the experience of the gallery was completely different when he was its director.

“When I came down and took over we turned the Johannesburg Art Gallery into the epicentre of the art world in Johannesburg by a long way. It was vibrant, it was alive.”

Works from European masters like Pablo Picasso, Francis Bacon, Pierre-Auguste Renoir and Rembrandt, to name a few, are in the gallery — although you won’t see them. They are stored in the basement, with about 90% of some 10,000 works under the gallery’s care.

In terms of African works, Emeritus Professor at the Wits School of Art and Wits Art Museum, Anitra Nettleton, who is an expert in African art, told Daily Maverick: “There is a large collection of late 19th and 20th century works by South African artists — although it was only in the very late ’80s that black artists’ works were acquired.”

Nettleton said it was difficult to put a monetary value on the collection, although the Brenthurst Collection alone could be worth several million rands, and in monetary terms is irreplaceable.

“But the value of this collection to Johannesburg and Gauteng goes much further,” said Nettleton.

“It is part of a colonial history and a story of the emergence from colonial shadows into a different cultural and — we hoped at one stage — more enlightened social and political matrix.

“I think because the institution is still perceived by many as a colonial imposition, its value to our heritage is lost.”

With the current state of the gallery, water dripping in, a lack of security and temperature control, this valuable and culturally significant art is at risk.

“Water in contact with any artwork is invariably destructive to it… Most of the materials used by artists, such as canvas, wood and paper are hygroscopic [absorb water from the atmosphere],” said the former curator at Iziko Museums of South Africa.

Excess humidity can cause materials to expand. Paper discolours and crinkles, wood warps and canvases detach from their grounds. Gilded ornaments on old picture frames can also become detached. There is a risk of mould forming on painted surfaces and the backs of paintings, especially on works stored in the dark.

How did we get here?

The JAG belongs to the City of Johannesburg. The city provides its budget, pays staff salaries and is supposed to oversee the maintenance of the structure.

Steven Sack, who was Director of Arts, Culture and Heritage for the City of Johannesburg from 2004 to 2011, told Daily Maverick that the city manages a portfolio of museums (including the Hector Pieterson Museum, Museum Africa and the James Hall Museum of Transport), which are poorly resourced.

“They all have a lot of staff vacancies and they all have ageing infrastructure that is not properly cared for. They all have collections that are deteriorating and are at risk,” said Sack. He wrote a report about this 10 years ago and says since then very little has been done to address these problems.

“The reason is because Arts and Culture is such a small portfolio — it’s very hard to get its voice heard within the city system. If you think about the city as well, the city is primarily responsible for the functioning of the city, water, lights, roads.”

Museums in the city have never been a priority, but even with the budget it did have, the repairs at the JAG have faced issues.

According to Till — who was the director at the time — and Sack, when a new wing was built in 1986 it had chronic leak issues because of the way it had been constructed.

“They cast water pipes into the concrete and they’d crack,” said Sack, “and so it was a disaster from the very first rains.”

Till said the leak manifests itself between the old existing building and the new building.

“It’s criminal that the galleries got into the state that they’re in,” said heritage architect Brian McKechnie. “If they [the City of Joburg] had just done continual maintenance on the building and then had a proper maintenance budget, we wouldn’t be sitting where we are now.”

Sack explained that, as with all departments in the city, the buildings belong to the city but are managed by the Johannesburg Development Agency (JDA) and Johannesburg Property Company — implementing arms of the city.

The JDA has a roster of contractors, and according to Sack, hired contractors with no experience in managing heritage buildings, who worked on the building from about 2018 to 2021.

“They did more damage — when they had finished, the building leaked more than when they started,” said Sack.

City of Joburg spokesperson Nthatisi Modingoane told Daily Maverick, “There are a number of things that have impacted on our ability to maintain the building in an optimal condition, including a long history of misdiagnosis of the infrastructural and design problems that have gotten progressively worse over the years, and not through lack of trying.

“For the greater part of the second half of 2021, a team of structural engineers that was commissioned by the Community Development Department via the JDA has conducted a thorough assessment of the entire building, not just the parts that have drawn public attention.

“From the report, we are now able to diagnose the problems properly and to prioritise future interventions appropriately. We are looking into the viability and cost implications of a number of possible sites that could serve as temporary storage for collections that are at risk.”

Where do we go from here?

A meeting was held recently with city officials and relevant stakeholders, and heritage architect McKechnie told Daily Maverick: “They’ve identified that the building is in really critical condition and they have to undertake major works to it and to protect the works they need to move them off-site and store them safely and create a satellite gallery.”

However, McKechnie said: “What the City of Joburg says it’s doing and what actually happens is not always the same thing.” DM