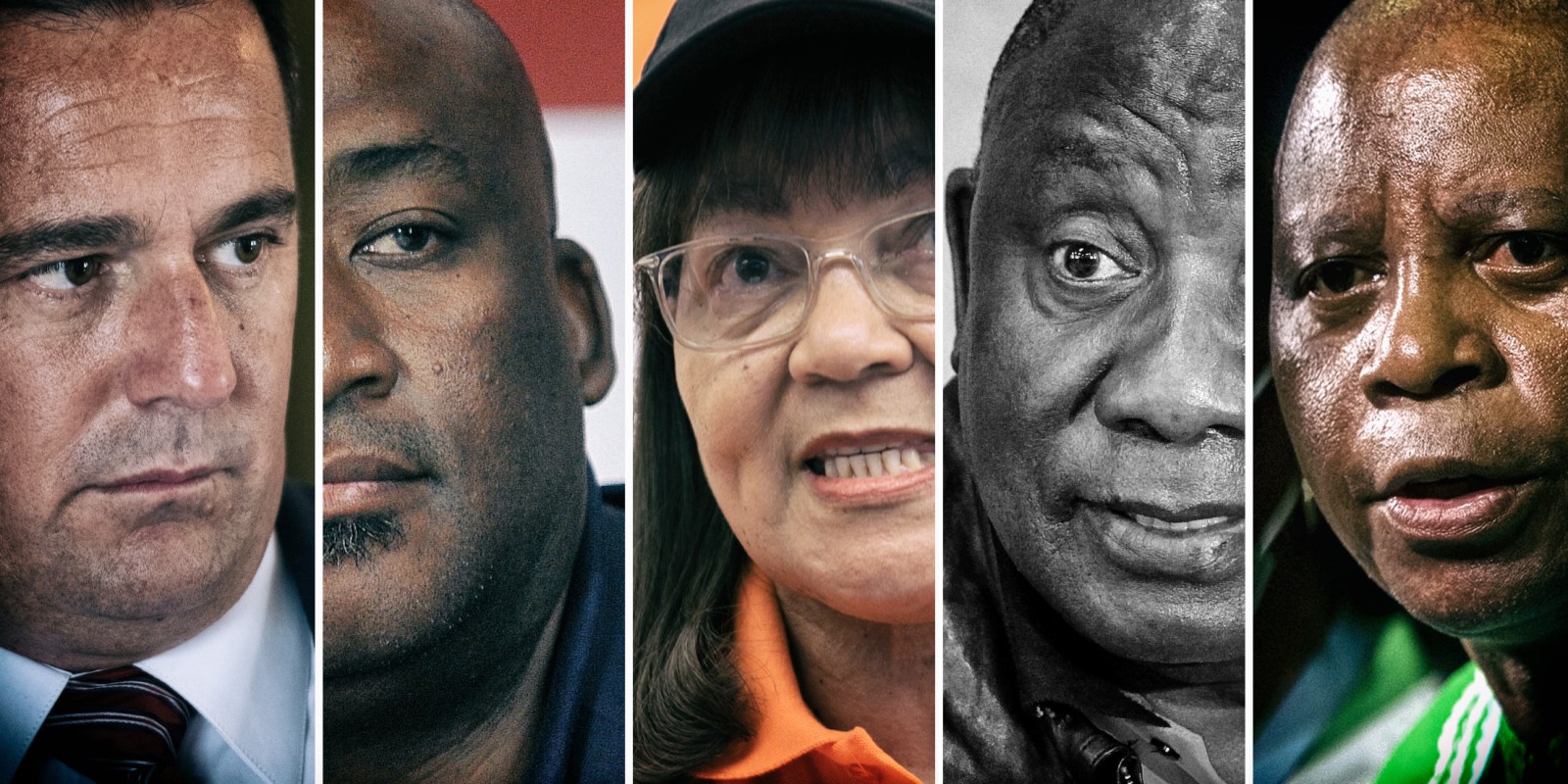 Two reports show the President will serve a second term — but in a shifted political landscape.

Two of the latest sets of national political research suggest President Cyril Ramaphosa will win the ANC elective conference in December, but is then likely to lead a coalition government from 2024 as the ANC heads into its era of decline.

The latest update to four likely scenarios for South Africa’s future, by scenario architect Jakkie Cilliers of the Institute for Security Studies, shows that in three of them the ANC will not win the 2024 election. But they also find it less likely that the so-called Radical Economic Transformation (RET) faction of the governing party wins its elective conference, slated for December. 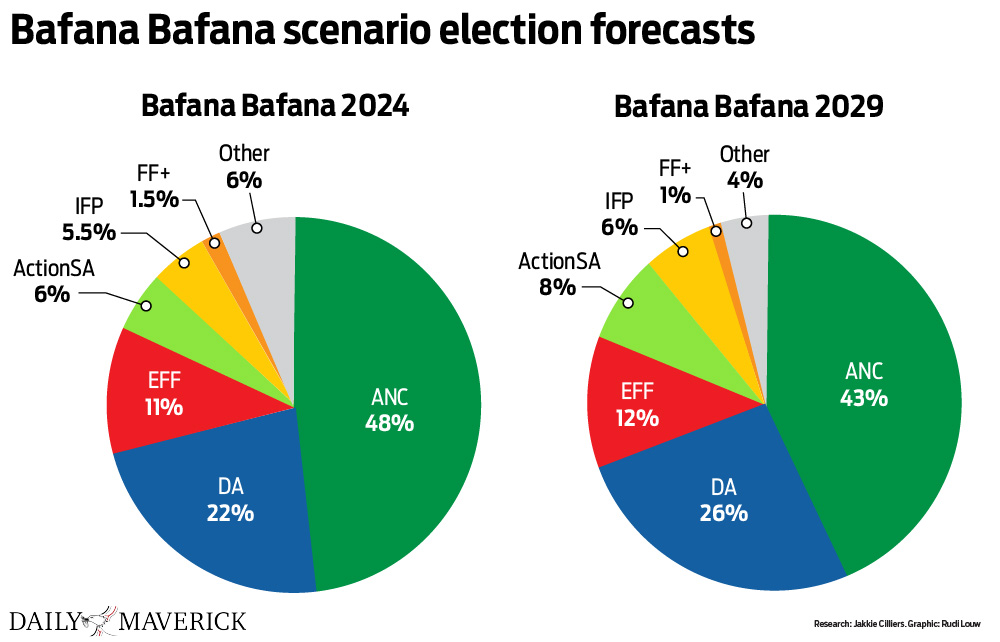 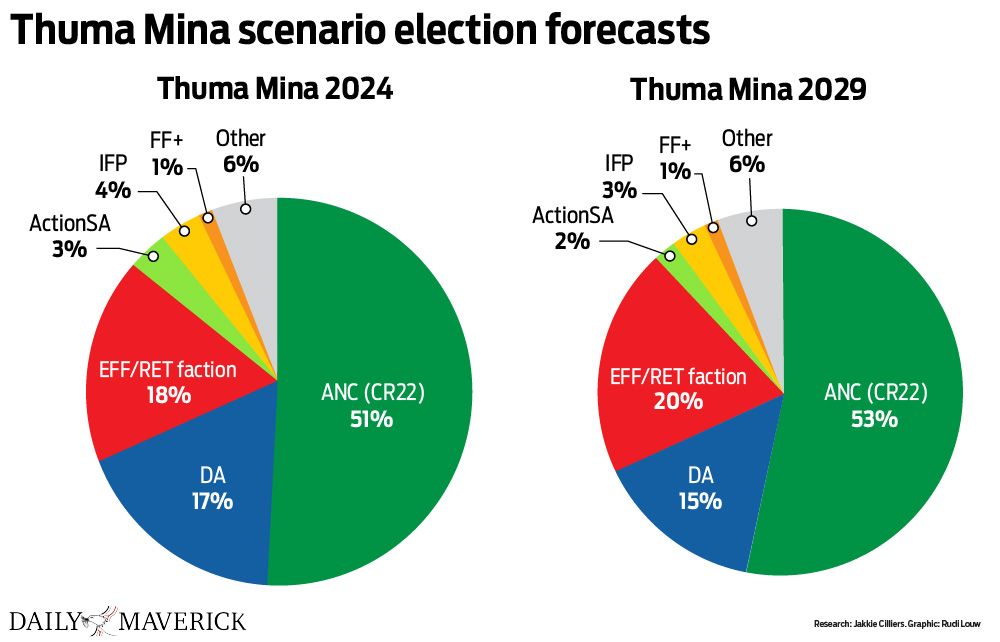 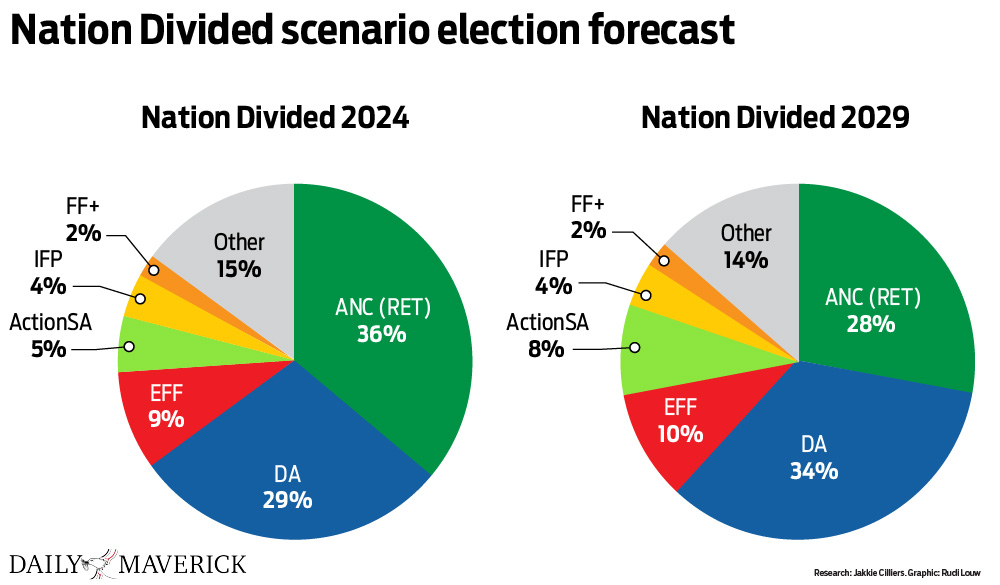 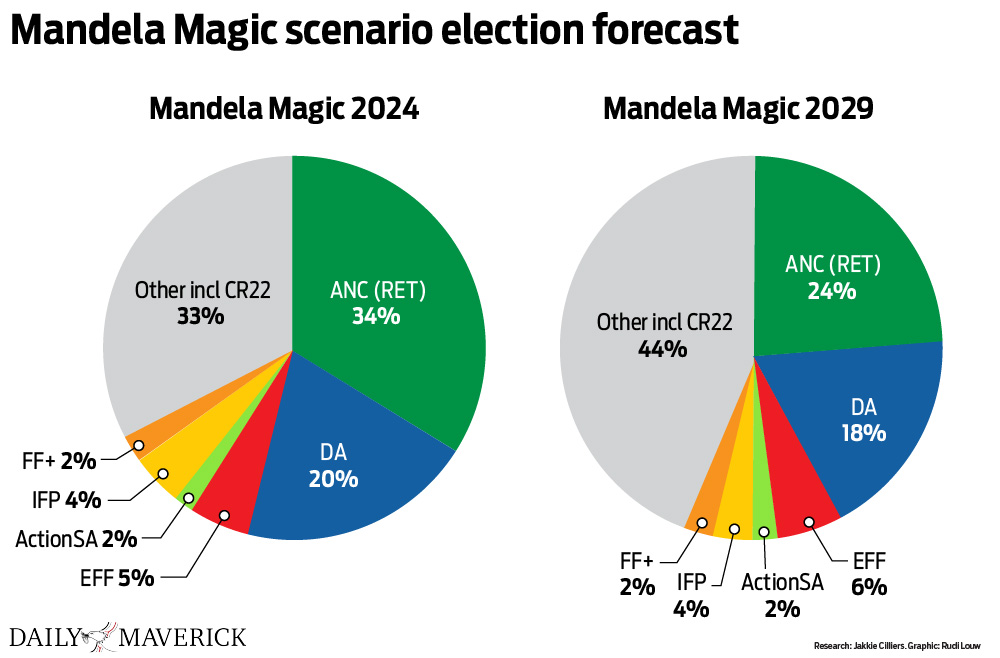 Scenarios are not predictions, but likely outcomes set out by experts based on various data sets and expertise. However, they do offer utility in thinking about the future.

The Bafana Bafana most-likely scenario sees a narrow win for Ramaphosa at the 2022 ANC conference and a narrow mandate which will see an extended period of hesitant reform so that by the 2024 national election the ANC wins 48% of the vote and slips to 43% in 2029.

The party then enters its period of decline mirrored in the fortunes of African liberation movement parties. It becomes a largely rural party where it continues to hold a majority with support from local businesses built around the state procurement system, and former homeland factions who hold sway in many provinces.

Less likely is the Thuma Mina scenario, named after the Hugh Masekela song translated as “Send me”, a presidential tagline. In this, Ramaphosa wins convincingly at the 2022 conference and the ANC wins a narrow majority of 51% in the 2024 election, extending this to 53% in 2029. The RET faction splinters off and the EFF can become the official opposition in alliance with this group. The DA’s best scenario is where the ANC does worst.

The ANC-supporting Inclusive Society Institute, which does extensive research, says the Thuma Mina scenario is more likely than not.

The next scenario sketched by Cilliers is the Nation Divided scenario, in which the RET faction wins in December 2022, has a year in which it can extract rents and then the ANC loses in 2024 and falls below 30% in the 2029 election.

The least-likely outcome, says Cilliers, is the oddly named Mandela Magic scenario. In this one, Ramaphosa does not run at the ANC elective conference and leads a breakaway from the governing party. In this scenario, the ANC falls to 34% support in 2024 and 24% in 2029.

In all four scenarios, the winners are coalitions, which now define South Africa’s political future. The upshot is that Ramaphosa is likely to get a second term as President but as the leader of a coalition government.  The party with which he will form that coalition is less clear. The opposition DA’s policy is not to partner with the ANC. The kingmaker EFF and the outlier success story of the 2021 local government elections, Herman Mashaba’s ActionSA, have also ruled out coalitions with the ANC. Cilliers predicts considerable political turbulence for South Africa whichever way it goes.

The ANC’s spokesperson, Pule Mabe, did not respond to requests for an interview about the scenarios.

Ramaphosa re-election has a high probability

The Inclusive Society Institute (ISI) led by Daryl Swanepoel does the most in-depth research into the ANC.

“While President Cyril Ramaphosa’s popularity has dropped among all South Africans from a 70% high in 2019, he remains by far the most popular leader in the country, and even more so among the ANC supporters. With such overwhelming support among the rank and file of the ANC, the probability of President Ramaphosa being re-elected at the December 2022 ANC conference is high,” says Swanepoel in research comments prepared for Daily Maverick.

“The ISI’s opinion is that the ANC will hold on to a narrow majority in the 2024 election and therefore it will not require a coalition partner,” says Swanepoel, adding that this will depend on voter turnout. “A re-elected and emboldened Ramaphosa could, hopefully, exert greater influence to hasten party renewal.”

But research by the Government and Public Policy think-tank’s data-driven study, “Dangerous Elites”, has shown that ANC infighting is a leading cause of violence and instability. In KwaZulu-Natal, North West and Mpumalanga, this infighting is weekly fare since it is the season of branch, regional and provincial conferences to decide on leadership elections, which in turn will determine who wins at the December conference. 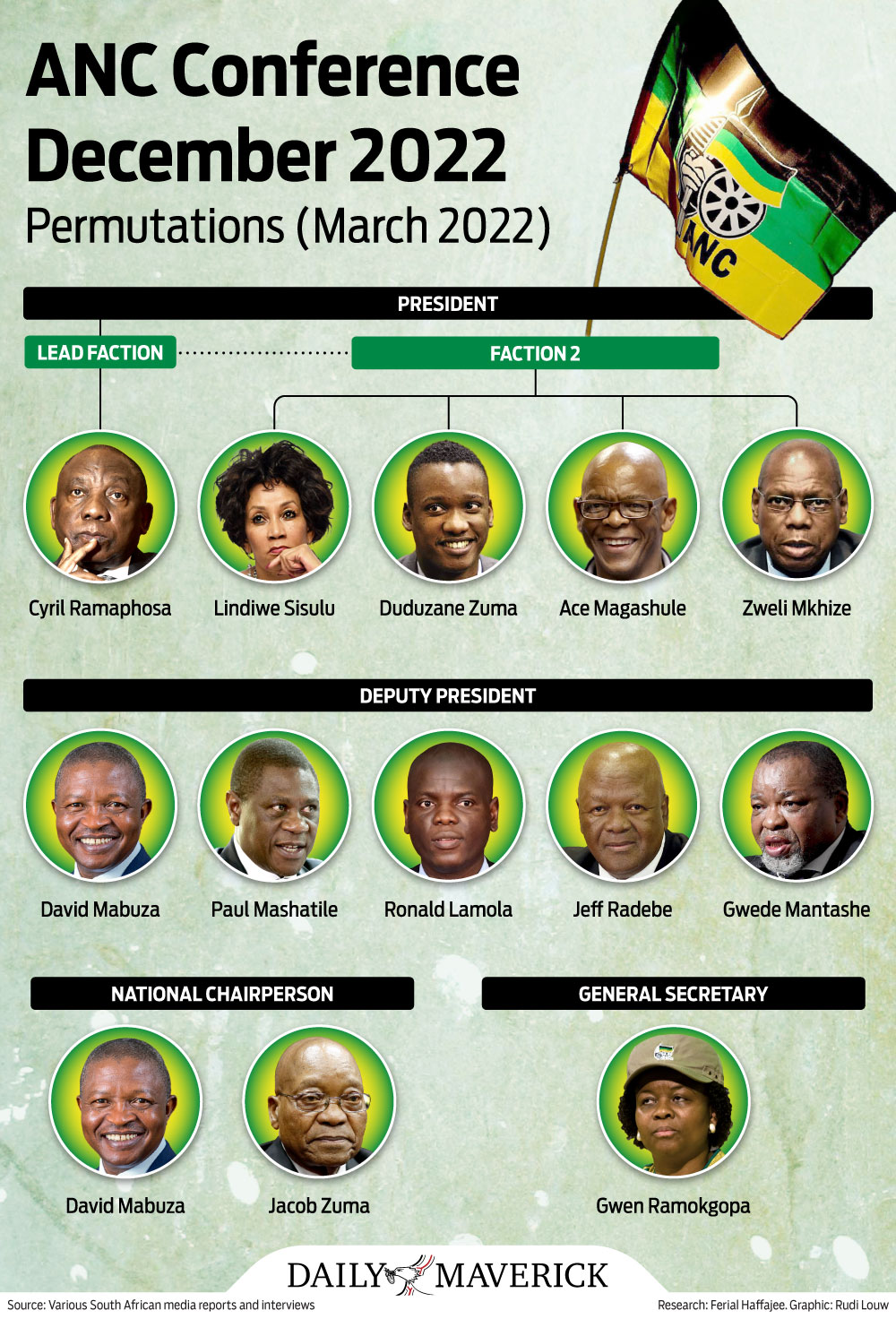 This graphic captures all the names, put forward a number of times in reports, of those entering the race for leadership of the ANC. Minister of Tourism Lindiwe Sisulu’s campaign is the most advanced, but her 2017 campaign to lead the party failed. The ANC in KwaZulu-Natal has said that Duduzane Zuma’s campaign is a social media phenomenon only and that his chances of a provincial nomination are slimmer than a wafer, but he is using government resources to build a base.

Former health minister Zweli Mkhize is running a media campaign to protest his innocence in the Digital Vibes health communication scandal, and he is also in campaign mode. Suspended ANC Secretary-General Ace Magashule is spending his millions on getting his asbestos-roofing corruption case thrown out of court and taking a run at party leadership.  This is what is referred to as the RET faction, a loose coalition of the wounded, many of whom are implicated in grand corruption.

This is why seasoned analysts say Ramaphosa will face noise, but not a serious run-off in December. Neither will he win a victory wide enough to secure a mandate for the kind of deep reform South Africa needs.

“The only way Ramaphosa could lose is if he steps back from contestation,” says Cilliers.

Keep an eye on Gauteng

The future is being written in Gauteng, the province made up of metropolitan hubs. The ANC has lost power in the cities of Johannesburg, Pretoria (run by the Tshwane council) and Ekurhuleni — the economic, political and manufacturing capitals. 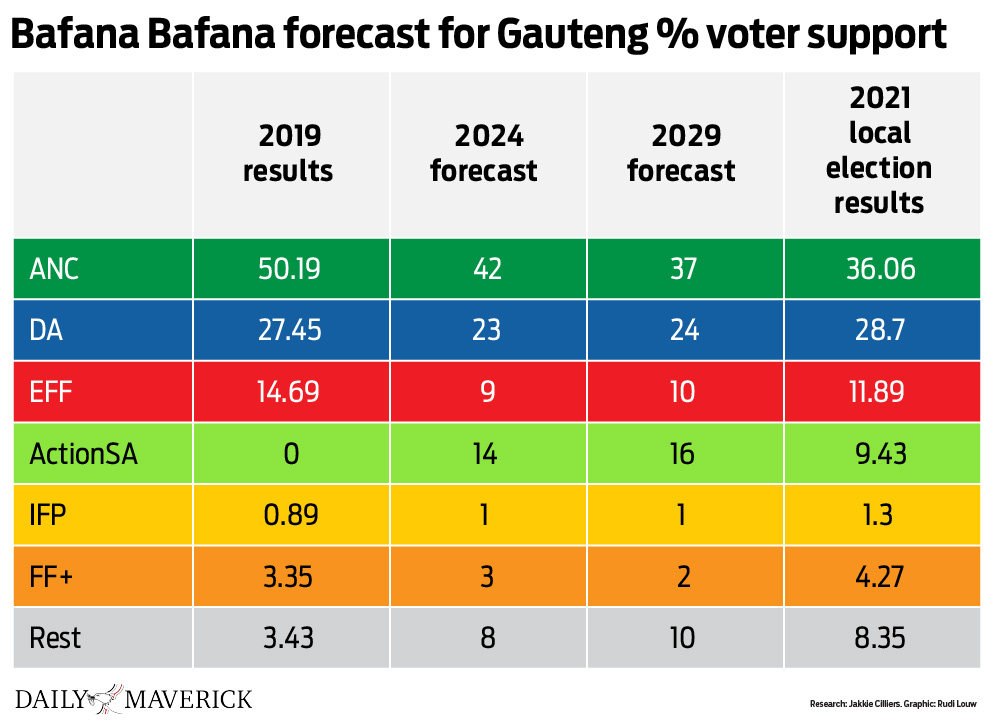 The Bafana Bafana scenario prediction is that in the 2024 national election the ANC will not win a majority and get 42% of the provincial vote, up from the 36% it received in the November 2021 election — not enough to form a provincial government. This will begin the trend of the party losing provinces that receive the highest proportion of fiscal transfer and where rent extraction is highest.

“Should party support slip below 50%, it will be marginal, and not requiring myriad coalition partners. Rather, it could negotiate with a number of smaller parties from which it could choose one, or maximum two, with which to work. This is different to many of the current coalitions at municipal level that allows for a tail-to-wag-the-dog scenario,” says Swanepoel.

He says that “even if the ANC drops slightly under 50%, it will remain the dominant force within government beyond 2024, and relatively comfortably (so) to drive its policy priorities. In this scenario, the party will, however, come under increased pressure to deliver on election promises which can be a good thing as failure to perform will place them in a more precarious position beyond 2029.” 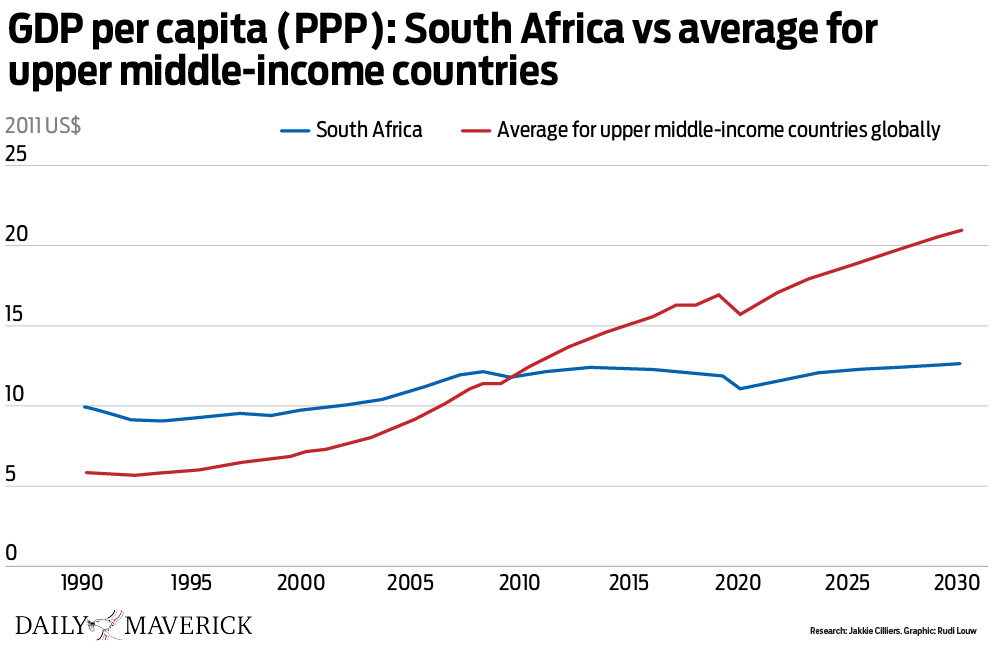 This is the most important chart to keep in mind when thinking about South Africa’s political future. The country is rapidly falling out of step with the basket of upper middle-income countries and it is likely to fall out of the group over the next decade, becoming a lower middle-income country.

Skilled migration is growing and unskilled immigration has shifted the political landscape as the competition for jobs and incomes in a shrinking economy becomes deadly. Parties like ActionSA and the Patriotic Alliance, which are kingmakers in Johannesburg, will spring up and pull policy from progressive to reactionary as far as migration policy goes.

This article from Daily Maverick 168 sets out the current state of provincial and regional elections which will determine the delegates who go to the ANC’s elective conference. DM

These Institute for Security Studies scenarios were updated to increase ActionSA’s potential voter turnout. They will be captured in a separate Daily Maverick report on that party.