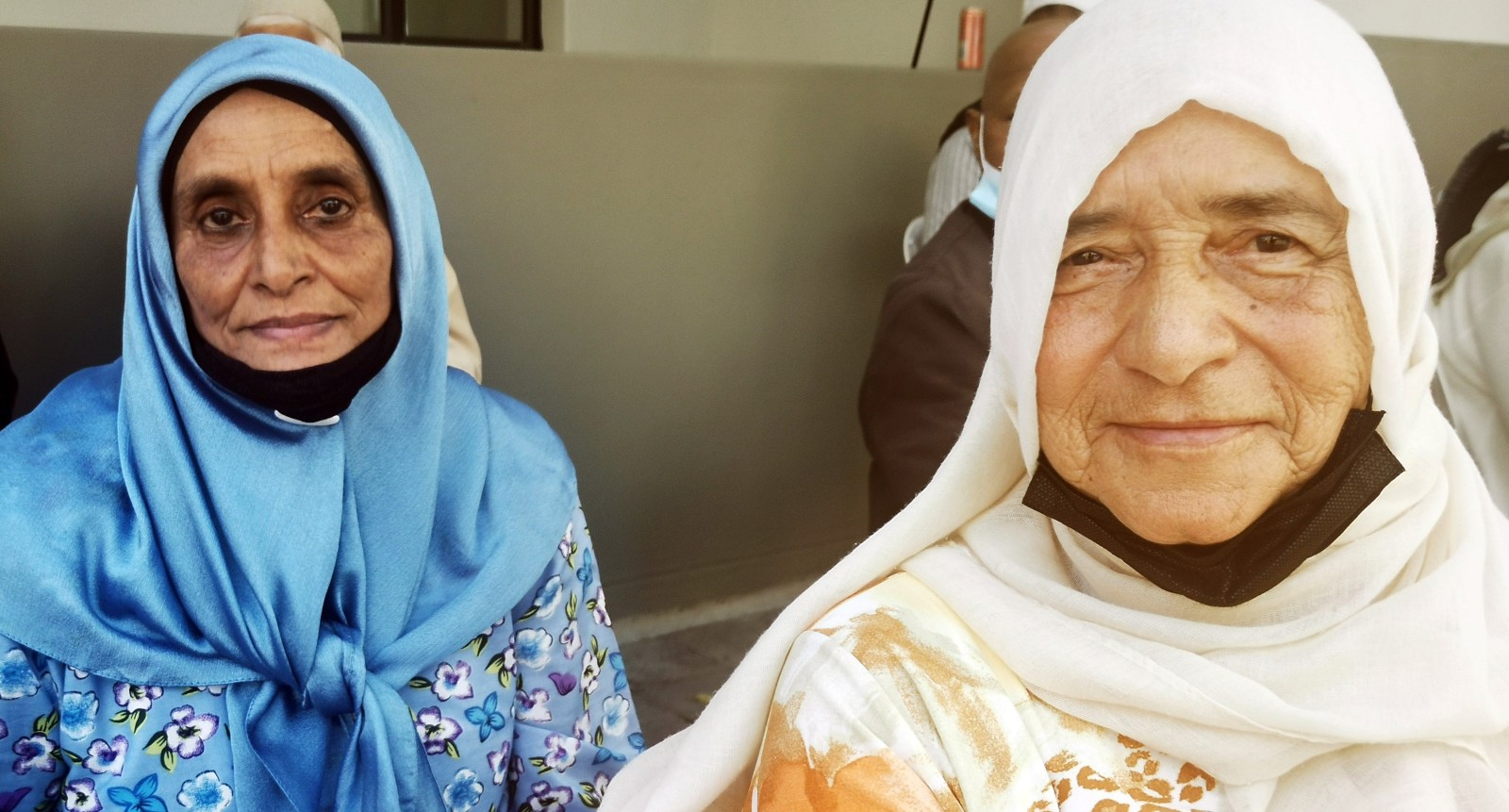 Mastoerah Toefy and Mariam Dirk, both 77, were neighbours in District Six before they were forcibly removed under the Group Areas Act. They became neighbours again, in Mitchells Plain, but when they return to District Six they will be a few streets apart. (Photo: Suné Payne, Daily Maverick)

They were neighbours growing up in District Six, now Mariam Dirk and Mastoerah Toefy are finally moving back after a protracted restitution process.

In a marquee outside a block of newly built flats on Hanover Street in Cape Town’s inner city, Mariam Dirk and Mastoerah Toefy were waiting for an event with the Inter-Ministerial Committee on Land Reform and Agriculture, led by Deputy President David Mabuza, to start.

Once under way, the women – among the other claimants and beneficiaries eager to move back to the area – aired their concerns about the restitution and redevelopment of District Six, a process that has been agonisingly protracted.

The women, who are both 77, have fond memories of growing up in District Six, once a multiracial and multicultural community. When they lived there they were neighbours.

“Wonderful, just wonderful – you [didn’t] need to be frightened to go outside. My neighbour was like my mother, my children were my neighbour’s children,” remembered Dirk. “We grew up very poor, but there was always food and everything – people loved one another.”

As young women in District Six, Toefy said there were “clubs in and clubs out”.

In 1966, District Six was declared a “whites only” area under the Group Areas Act. The apartheid government then forcibly removed about 60,000 residents to places far outside the city such as Mitchells Plain, Langa, Hanover Park and Manenberg.

“We didn’t want to move out of District Six… We were the last ones who moved,” said Dirk, adding that her family was first told to move to Bonteheuwel or Kreefgat, a community along the N2 near Bishop Lavis.

Dirk eventually ended up moving to Lentegeur in Mitchells Plain – living on the same street as her previous neighbour, Toefy.

Moving out of District Six was an emotional journey, said Toefy. Dirk said it was “not nice” to remember the forced removals because “it was heartsore”.

Now, the neighbours have a chance to move back to District Six.

In 2018, the District Six Working Committee – made up of claimants – won a case against the Department of Agriculture, Land Reform and Rural Development that forced the speeding-up of the building of homes for claimants.

Land Claims Court Judge Jody Kollapen ordered the department to come up with a progress report for the District Six Development Project that included plans, timelines and funding, Daily Maverick reported at the time. The project involves the redevelopment of housing for District Six land claimants.

As part of the court order, the department is required to produce an update on its progress every three months.

This week, the interministerial committee visited the area to check on the redevelopment’s progress and watch claimants sign papers giving them ownership of their allocated units.

A meeting was also held for claimants and the government contingent at District Six’s Moravian Church.

Minister of Agriculture, Land Reform and Rural Development Thoko Didiza told the meeting – which Toefy and Dirk attended – that the department planned to finish building housing units for 954 verified District Six land claimants. The redevelopment was in phase 3 and 108 housing units would be built.

Mabuza told the meeting that “not everything will be resolved all at once. No matter how small the steps of progress we make, the dignity of the people of District Six and restoration of their land rights will be achieved.”

During the meeting, several complaints were made by elderly people about having to walk up flights of stairs to get to their units.

This was also something mentioned by Dirk, who told DM168 that she suffers from cancer and angina (chest pains).

She also needed to use a walking stick at times because her legs became weak: “Sometimes it’s fine, sometimes I have to use the stick.”

Dirk said she would ask if she could be moved from her allocated unit, situated on the second floor of a building on a hilltop, to one lower down. “The houses are nice, but I don’t like the flats because I must walk up the stairs and I can fall anytime because I get dizzy,” she said.

“I think they must put lifts in.”

Hearing this, Toefy said: “But I’m frightened of lifts – what if they get stuck?”

But there is another problem: Toefy and Dirk have been allocated units far apart, on separate streets.

“Now they put us in different [places]; now they’re away from us,” said Dirk. “You know, her children were like my children.”

Toefy echoed this sentiment, but Dirk reassured her. “I’ll come visit you,” she said.

Asked what she thought about the interministerial committee’s visit, Dirk said: “I would love that they listen to our stories.”

But the conversation took a sadder turn: many of the claimants are elderly and some have died waiting for restitution, including the oldest land claimant, 100-year-old Aunty Shariefa Khan, who died in January.

“I feel very sad about it – they could have built these places for people a long time ago… That woman was so excited to come back,” said Dirk.

About moving back, Toefy’s eyes grew larger and she said: “This is history.”

The women have not yet moved into their units, but signed ownership for them during the deputy president’s visit.

“The first thing my mother will do is pack,” said Toefy’s daughter. “She wants to do that – she’s very excited. She started packing a long time ago. This is very emotional for her because she always cries, all the time.”

Shira, Toefy’s youngest child, was five years old when her family was moved to Mitchells Plain.

“I never thought my mother would see this one day because of them growing old,” she said. “Her mother, who has passed on, always spoke about District Six – I never thought they would do this.”

For Dirk, it is simple: “I always wanted to come back. That’s why I say I want to die in District Six.” DM168