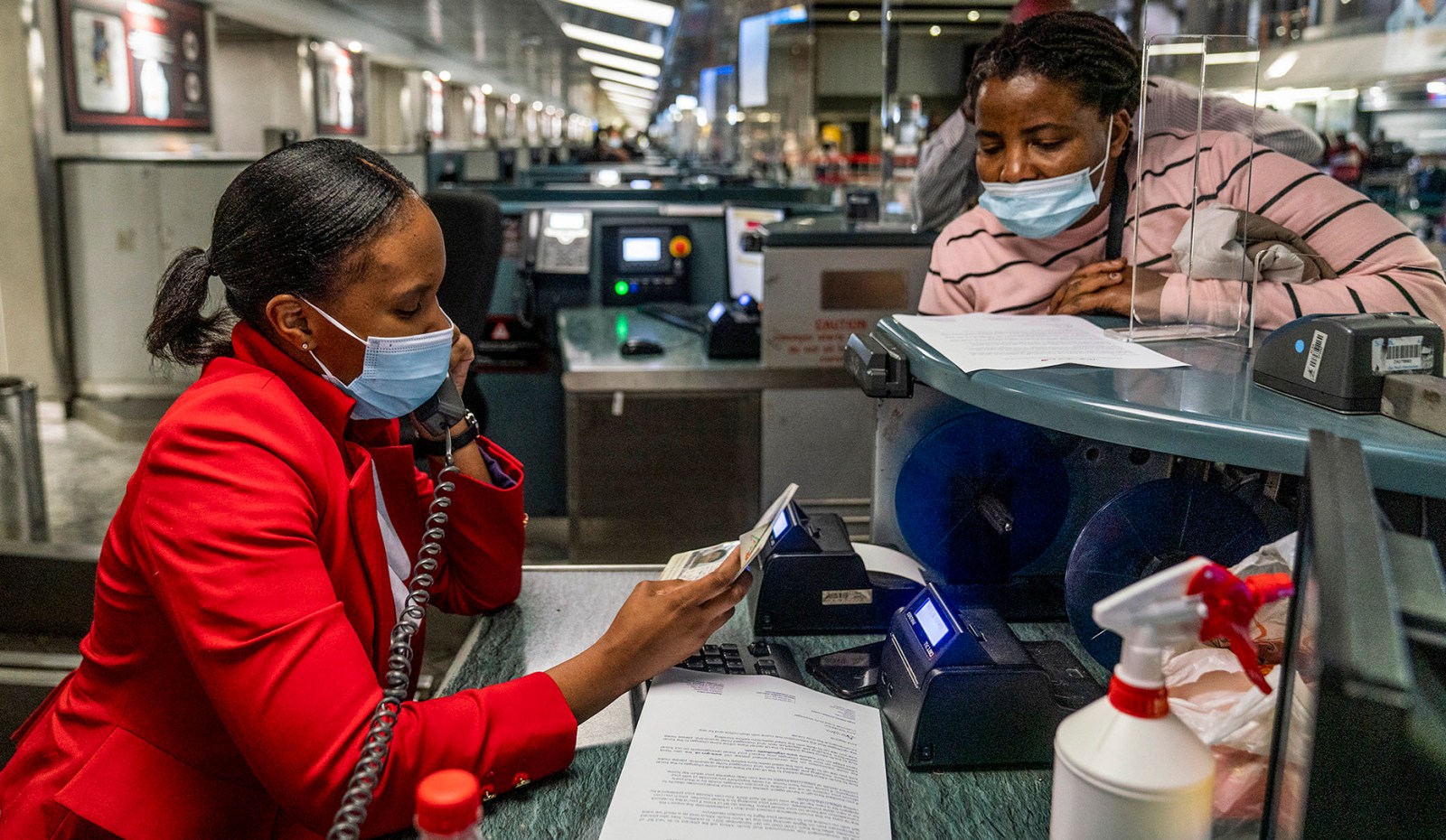 A woman tries to get help from a Virgin Atlantic staff member following the cancellation of her flight to London at OR Tambo Airport on 26 November 2021. (Photo: Shiraaz Mohamed)

While President Cyril Ramaphosa’s address on Tuesday – when he announced changes to some lockdown restrictions, including new rules on the size of gatherings, travel requirements and masks – has been somewhat welcomed, the draft regulations proposed to manage the government’s response to the pandemic have been met with strong pushback.

Amid mounting pressure from the tourism and hospitality sector to amend South Africa’s inbound travel restrictions, Ramaphosa announced that vaccinated travellers will no longer be required to provide a negative PCR test to enter the country.

Various travel associations have welcomed Ramaphosa’s decision to scrap the onerous and costly PCR test requirement for vaccinated travellers, saying it was critical to provide relief to the industry.

The Association of Southern African Travel Agents (Asata) called the amended travel requirements “a boost to the South African travel and tourism industry ahead of the Easter holidays”.

“Asata has lobbied tirelessly for the past eight months… for the government to scrap PCR tests for fully vaccinated travellers. There’s no denying that the costly PCR test required for travel has been a major obstacle to the travel industry’s recovery,” said Asata CEO Otto de Vries.

The PCR requirement for travel had left South Africa on the “back foot” compared with many other countries that either waived testing for fully vaccinated travellers or allowed inexpensive and faster rapid antigen tests.

However, De Vries was concerned that the draft health regulations will need to be reviewed to ensure the PCR test for travellers will not be reintroduced with the lifting of the State of Disaster in mid-April.

“Although the draft legislation indicates that vaccinated travellers won’t need to present a negative PCR test for entry into the country, there is a real danger with the proposed legislation that components of lockdown legislation are being written into permanent law,” he warned.

While the DA welcomed the easing of some restrictions, it said the changes to the State of Disaster regulations announced by the President “do not go far enough, and continue to hold the country back from full recovery”.

“Despite some welcome changes, the persisting rules will harm jobs and increase poverty while providing no benefit at all. The DA welcomes the scrapping of the outdoor mask-wearing requirement and the announcement that vaccinated travellers will not need a negative PCR test to enter the country. This will go some way to helping our tourism industry and other cross-border businesses recover,” said DA national spokesperson Siviwe Gwarube.

The DA has announced that it would be heading to court to challenge the extension of the National State of Disaster, while ActionSA too has threatened to take legal action.

AfriForum sharply criticised the extension, saying it had started legal action in February to nullify the State of Disaster.

Speaking to Daily Maverick ahead of the President’s address, professor Shabir Madhi, dean of the faculty of health sciences and a professor of vaccinology at the University of the Witwatersrand, called the extension of the State of Disaster last week “indicative of the NCCC being devoid of any understanding of the pandemic”.

Madhi said it was “foolish” to continue measures imposed under the State of Disaster that are geared towards preventing infections, instead of preventing severe disease and death.

Addressing the nation on Tuesday, Ramaphosa reiterated his commitment to ending the State of Disaster while erring on the side of caution by ensuring the government maintains its ability to impose further restrictions when necessary.

“Due to the changing nature of the pandemic, and due to the progress that has been made through our collective efforts, we intend to lift the National State of Disaster as soon as public comment on the health regulations published by the minister of health has been completed,” he said.

These regulations, when finalised, will replace the State of Disaster regulations as the legal instrument that we use to manage the pandemic.”

The regulations that have been proposed to manage the government’s response to the pandemic have, however, already been sharply criticised by numerous health and vaccine scientists.

Writing in Daily Maverick, Madhi and other public health experts said the proposed regulations are an “ill-conceived and misdirected attempt to continue preventing SARS-CoV-2 infections and appear to be oblivious to the new realities of Covid-19, two years into a pandemic”.

Read in Daily Maverick: The incoherent and illogical new government Covid-19 regulations are the real state of disaster

Despite Ramaphosa’s claims that the proposed health regulations are in line with the “changing nature of the pandemic”, experts have disagreed, and called for the draft regulations to “be rewritten to consider the knowledge gained through science over the past 26 months”.

As of Tuesday evening, the total number of laboratory-confirmed cases in the country stood at 3,705,696.

“Due to the ongoing audit exercise by the National Department of Health (NDoH), there may be a backlog of Covid-19 mortality cases reported,” said the National Institute for Communicable Diseases (NICD).

On Tuesday, the NDoH reported three Covid-19-related deaths and of these, one occured in the past 24 to 48 hours. This brings the total fatalities to 99,893.

Most new Covid-19 cases were recorded in Gauteng, which accounted for 33% of new infections, followed by the Western Cape (23%) and KwaZulu-Natal (22%).

According to the NICD, there was an increase of 34 hospital admissions in the past 24 hours and, as of Tuesday evening, 2,003 people were in public and private hospitals for Covid-19.

According to the Department of Health, 33,105,213 vaccines have been administered, 79,276 of which were given on Tuesday. DM