Foreign nationals gather at Parliament to protest against xenophobia 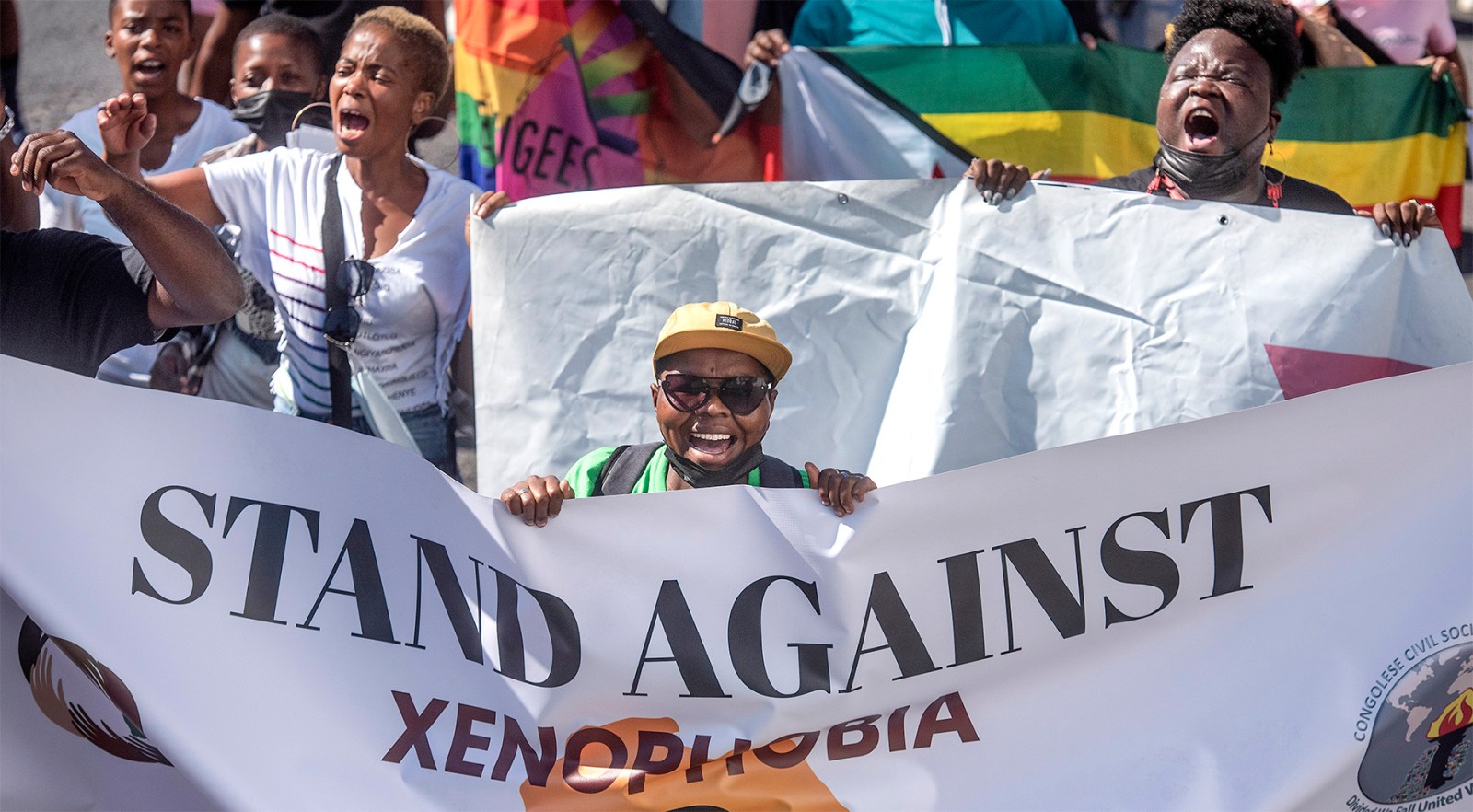 Protesters at the ‘Stand together against xenophobia and discrimination march’ to Parliament in Cape Town on Human Rights Day, 21 March 2022. (Photo: Gallo Images / Brenton Geach)

Migrants and asylum seekers have been facing increased violence from xenophobic groups in Gauteng, the Western Cape and KwaZulu-Natal.

Foreign nationals gathered at Parliament in Cape Town on Monday, Human Rights Day, to denounce xenophobia after a rise in attacks against migrants in South Africa.

The “Stand together against xenophobia and discrimination march” was attended by about 50 people and saw foreign nationals calling on the government to intervene to ensure their safety.

Xenophobic tensions have flared up with the resurfacing of the movement Operation Dudula, which has been targeting undocumented foreign nationals and demanding that they leave the country.

Mercy Dube, originally from Zimbabwe, read out a memorandum to the crowd. She said in the light of increased xenophobic violence and threats, there was a need for community education initiatives at local and national levels to change perceptions towards migrant community members.

“This ongoing anti-foreigner violence currently going on in Soweto, Alexandra, Johannesburg Central, Robertson and Pietermaritzburg must stop with immediate effect. Seeing it is a gross abuse of the worst violation of the most important God-given right, which is inherent to each single human being on Earth, namely, the right of life… with our common and not negotiable human dignity… highlighted in the Bill of Rights of the South African Constitution,” Dube read from the memorandum.

Violence broke out this month in Alexandra in Johannesburg between migrant street vendors and members of the Dudula Movement.

Alongside the need for education to achieve a change in perceptions of foreign nationals, the memorandum called for the establishment of a conflict management process to address xenophobic tensions, compensation for damaged property and businesses, for journalists to not fuel the tensions through sensationalist reporting, and for immediate mechanisms to prevent further xenophobic violence.

The memorandum was to be handed to Victor Ngaleka, but the Procedural Advisor in Parliament was a no-show and, said the organisers, his phone was off.

Albert Mpazayabo, the media spokesperson for the protest, told Daily Maverick that citizens should not be taking the law into their own hands with regard to the documentation of foreign nationals. Mpazayabo, who is also the executive coordinator of the Network for Immigrant Rights and Responsibilities — SA, said the right to life should be enjoyed by all on South African territory.

“The right for life is inherent to [humanity]. It’s not negotiable. It’s not about the [Operation] Dudula deciding who must die and who must live. The right to life goes with your human dignity… we want South Africa to implement its laws through its departments and not by [Operation] Dudula. We love South Africa, it is our home away from home,” the Rwandan national said.

Dube told Daily Maverick she was terrified the increased xenophobic violence was endangering her life.

“Am I going to be part of the statistics… and be killed? We know the situation back home in our countries, we run away from different issues: war, economic hardships… So each time you leave the house, you leave the house with a fear that you’re not coming back.

“And even in your own house, you are not safe, because people against non-locals can just burn your house. And we feel that individuals do not have the right to be asking for documentation. That is the job of the Home Affairs to see who is documented and who’s not documented in South Africa.”

Up to 250,000 Zimbabweans are affected by the expiry of the Zimbabwean Exemption Permits.

Activists gather to discuss xenophobia and the Zimbabwean Exemption Permit

Crispin Kassarombo (40), from Democratic Republic of the Congo (DRC), told Daily Maverick he was at Parliament to celebrate Human Rights Day and to hand over the memorandum to encourage the government to act against growing violence against foreigners.

“South Africa is my home because I am an African,” said Dube. DM