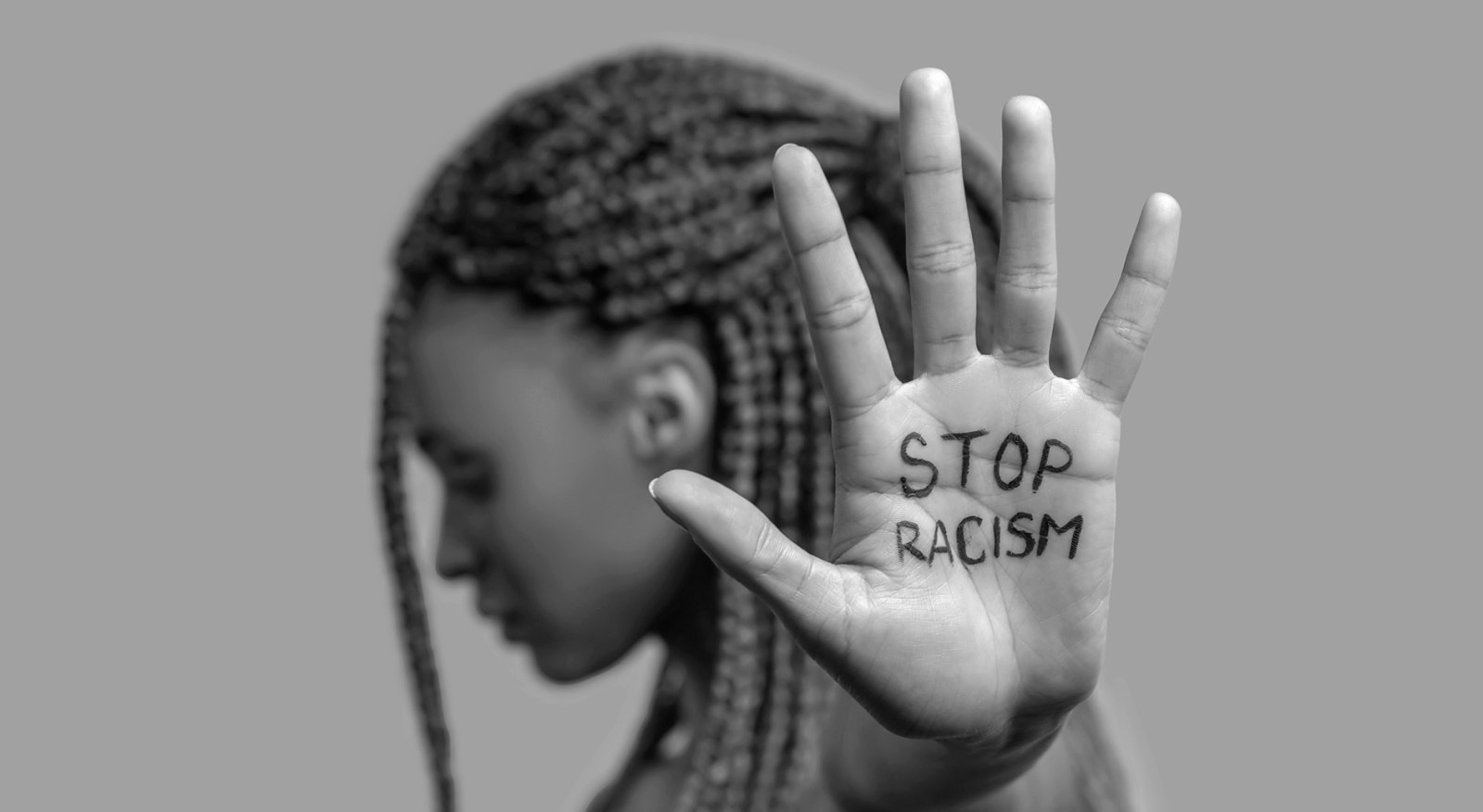 The Presidential Climate Commission will be hosting its second Just Transformation Framework community consultation in Lephalale, Limpopo on Tuesday. The Anti-Racism Network South Africa encourages all sectors of society to hold activations and discussion for Anti-Racism Week. On Saturday, 19 March, Constitution Hill’s three-day Human Rights Festival will begin, offering a range of exhibitions and opportunities for dialogue.

Anti-Racism Week kicks off on Monday, 14 March. The Anti-Racism Network South Africa – currently coordinated by the Ahmed Kathrada Foundation, the Institute for Justice and Reconciliation and the Centre for Advancement of Non-Racialism and Democracy – is encouraging all sectors of society to get involved in the week and host self-initiated activities.

The 2022 theme for Anti-Racism Week is “UNITE and ACT against racism, racial discrimination, xenophobia and related intolerances”. It culminates in Human Rights Day and the International Day for the Elimination of Racial Discrimination on 21 March. 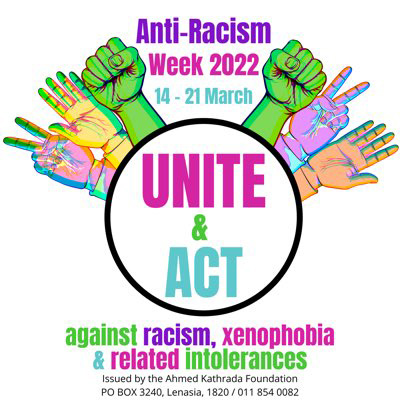 “Activations can be small or large gatherings. The only request that we make is for you to share information of such activations so that we can assist with publicity and other material if needed. This information is also needed to indicate the scale and reach of anti-racism work during the week as well as the resources that might be available from various organisations which others can possibly use to strengthen their work,” the Anti-Racism Network said.

If you are interested in attending Anti-Racism Week activities hosted by organisations affiliated with the network, call 011 854 0082 for further details. 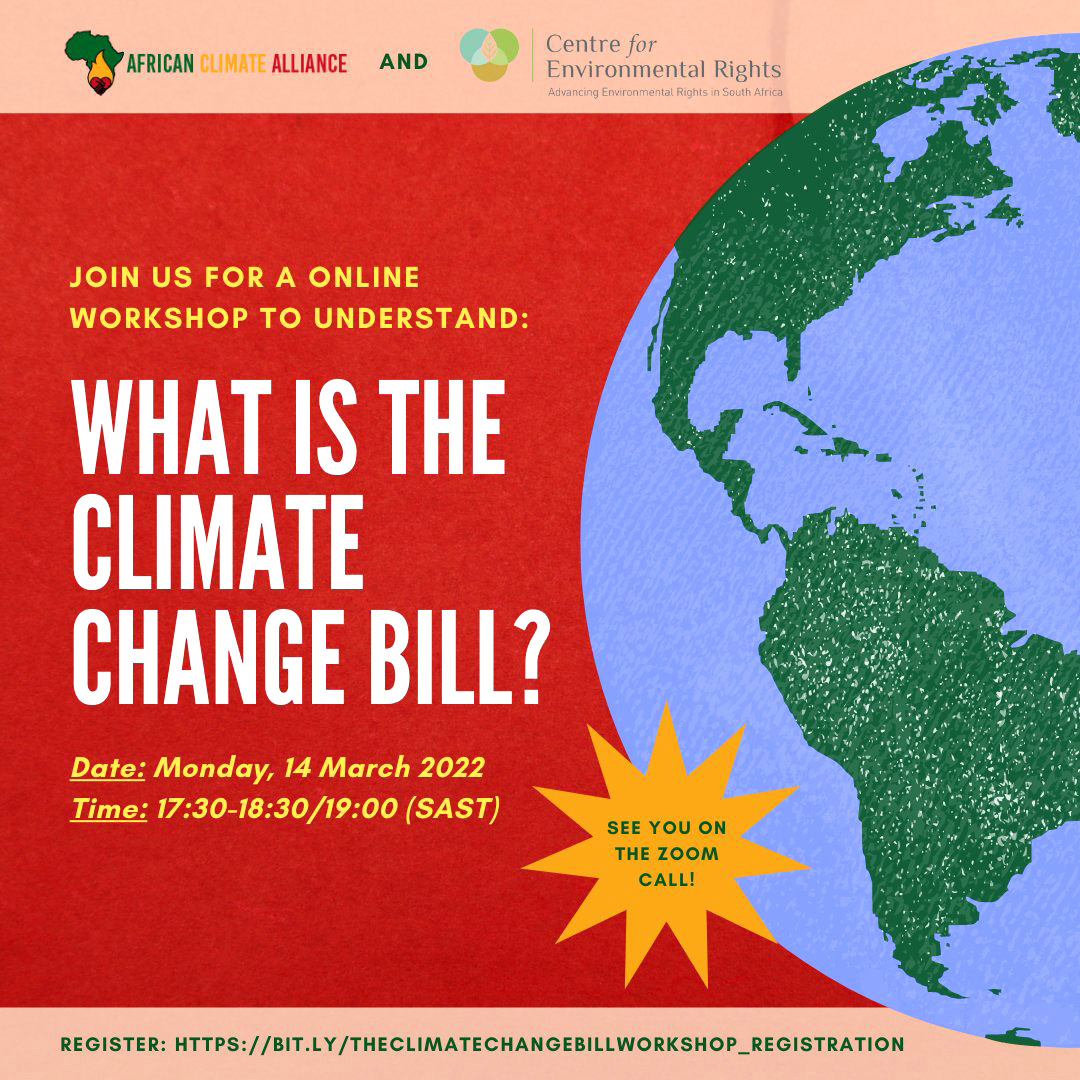 At 5.30pm on Monday, the Centre for Environmental Rights, in partnership with the African Climate Alliance, will host an online workshop to understand the Climate Change Bill. It will unpack what the bill is, why people should care about it and how they can get involved. It will provide a base-level understanding rather than highly academic information. Register here.

On Tuesday, 15 March at 9am, the Presidential Climate Commission (PCC) will hold its second Just Transformation Framework community consultation in Lephalale, Limpopo.

The PCC, established in 2020 by President Cyril Ramaphosa, advises the government and social partners on the country’s response to climate change and is key in developing pathways to a low-carbon economy and society. The Just Transition Framework involves policy briefs on key questions, public dialogues and engagements with different sectors of society.

A draft Just Transition Framework, informed by the first set of public consultations by the PCC, has been published for further comments until 31 March 2022. It can be accessed here.

The Lephalale community consultation will be livestreamed on all the PCC’s online platforms, which can be accessed here, as well as the Lephalale Facebook page here. 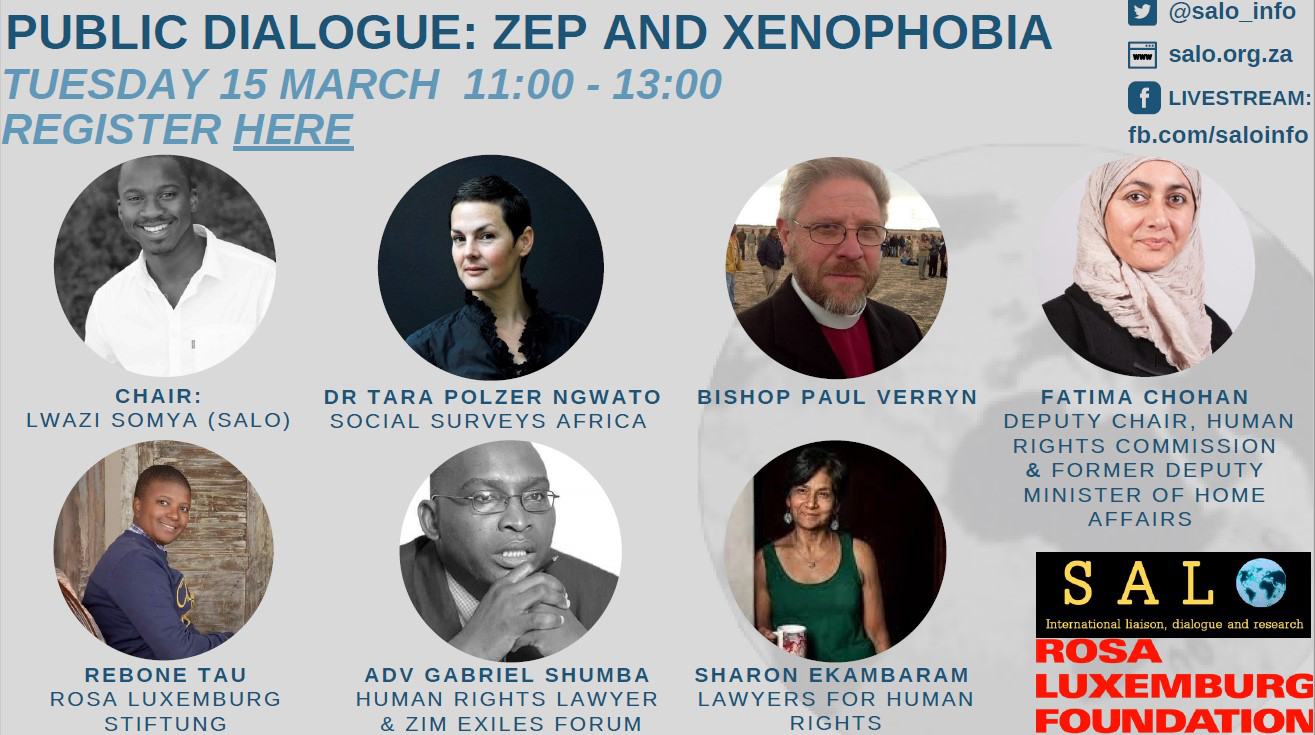 Later on Tuesday, at 11am, the Southern African Liaison Office together with the Rosa Luxemburg Foundation will host a public multistakeholder dialogue on current issues facing migrants in South Africa, including the Zimbabwe exemption permit and rising xenophobic attacks.

The permit’s expiration in December 2021 has affected between 182,000 and 250,000 Zimbabweans living in South Africa, according to the event organisers. A 12-month grace period in which permit holders can apply for other permits appropriate to their situation, began on 25 November 2021. Those who do not acquire another permit in this period will have to leave South Africa or face deportation.

The country has seen a rise in anti-immigrant sentiment and xenophobic attacks in recent months. Movements such as #PutSouthAfricansFirst and Operation Dudula, as well as some political parties, have advocated an anti-foreigner stance.

Those interested in engaging with these issues in the public dialogue can do so here. 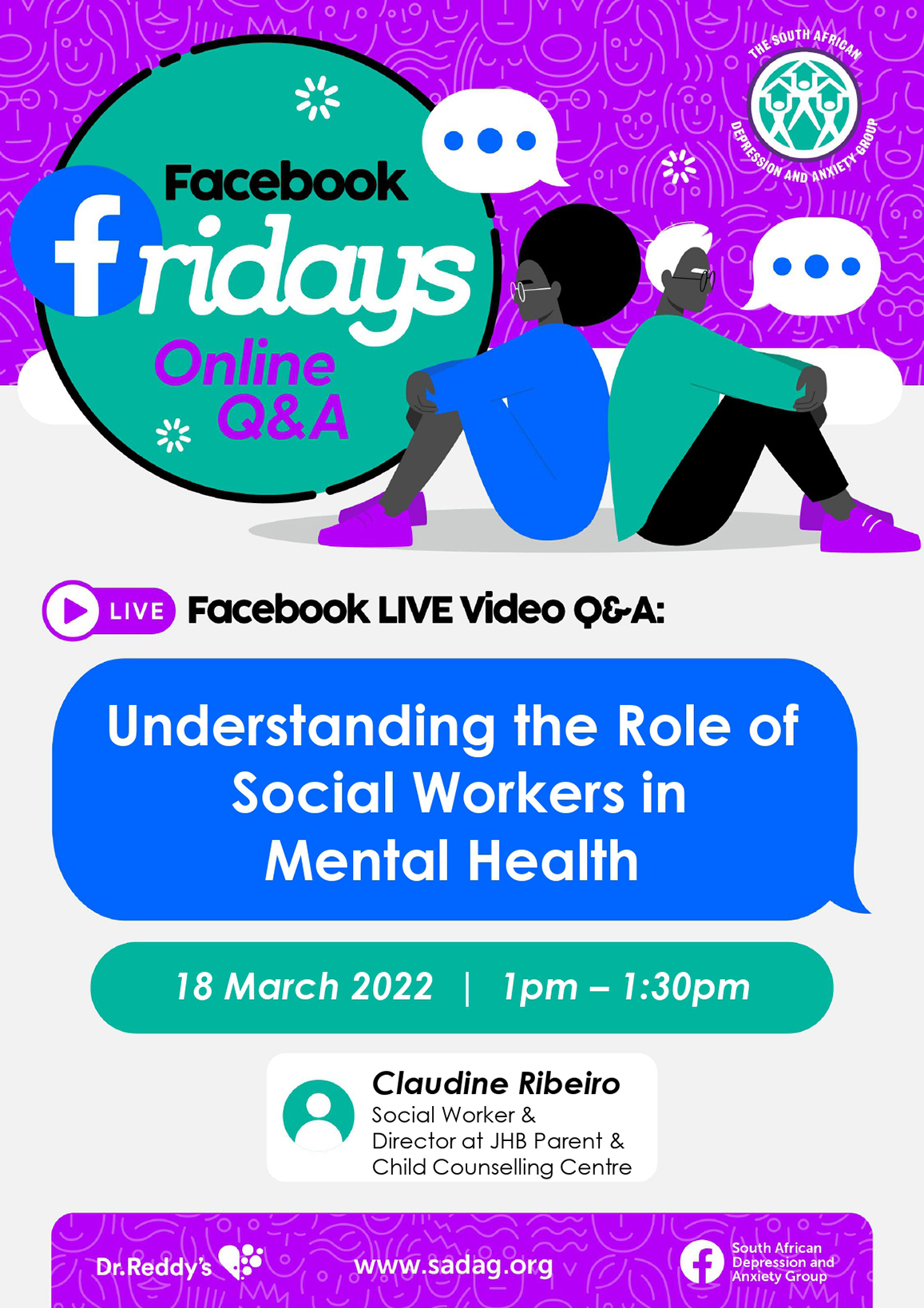 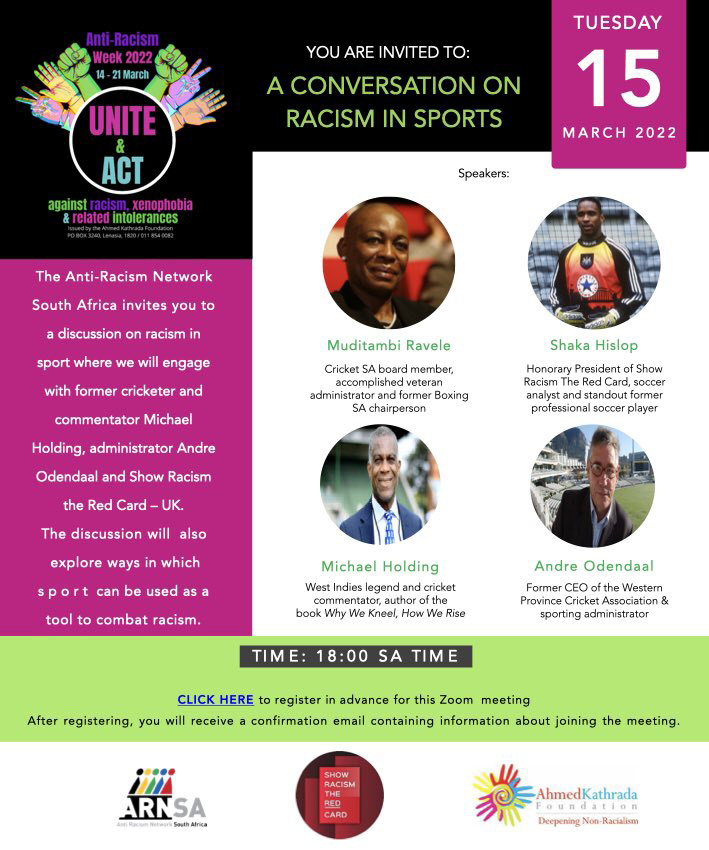 At 6pm on Tuesday, the Anti-Racism Network South Africa will be hosting an online conversation about racism in sport. Among those involved will be Michael Holding, former cricketer and commentator; Shaka Hislop, honorary president of Show Racism the Red Card; Andre Odendaal, former CEO of the Western Province Cricket Association; and Muditambi Ravele, a Cricket South Africa board member. The discussion will explore ways in which sport can be used as a tool to fight racism. Register for the meeting here. 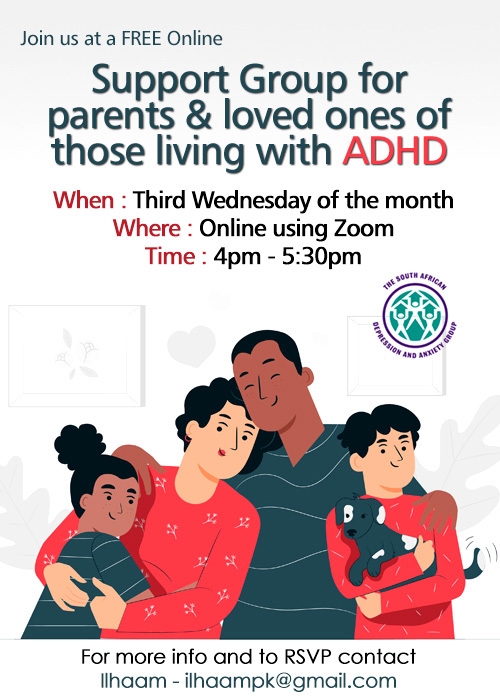 On Wednesday, 16 March at 4pm, Sadag will host a new free support group for parents and loved ones of those with attention deficit hyperactivity disorder (ADHD). For more information contact Ilhaam, the support group leader, at [email protected]. 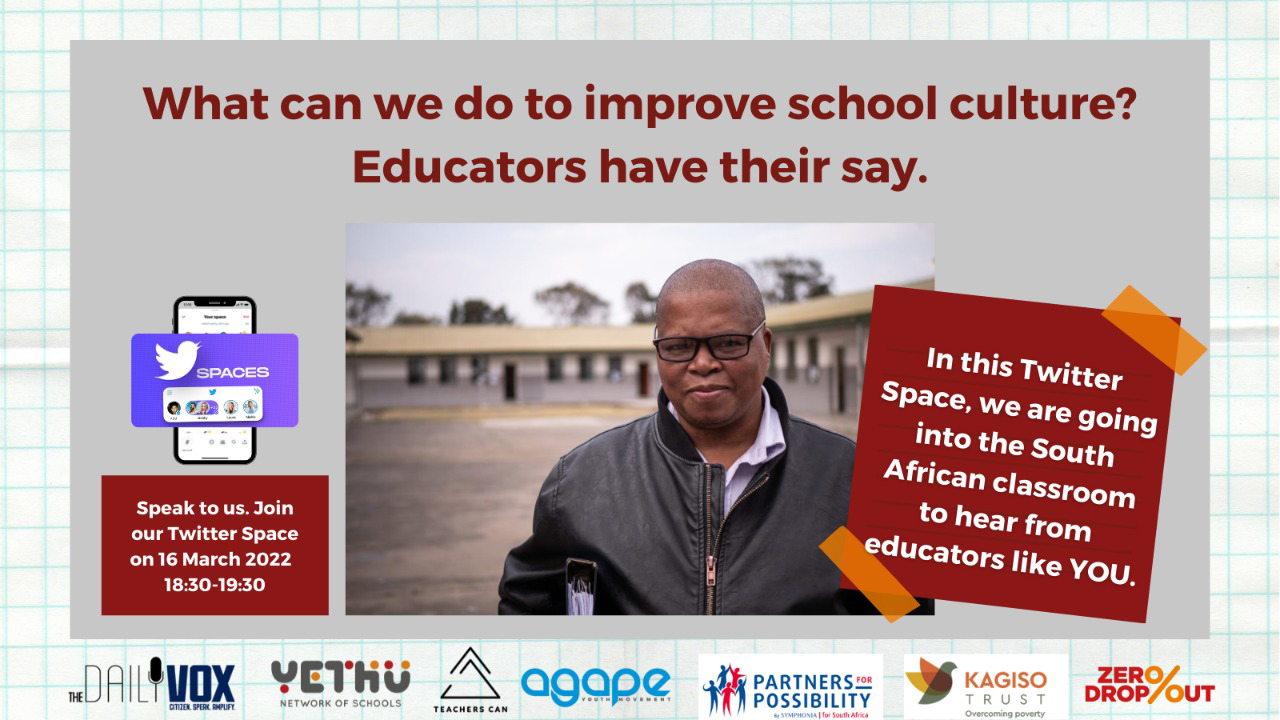 At 6.30pm on Wednesday, the Zero Dropout Campaign will host a discussion on how to create safe and enabling spaces in which pupils can thrive. It will take place in the organisation’s Twitter Space, with the input of South African educators. Join the Twitter Space here.

On Thursday, 17 March at 4pm, a webinar on “Climate change and conflict in Africa: A Reflection on COP26”, will be hosted by the Centre for Civil Society. COP26, the 2021 United Nations Climate Change Conference, focused on enhanced commitments to combating climate change.

Thursday’s event will focus on sub-Saharan Africa as the fastest-growing region in the world. This rapid growth comes with challenges related to climate change. As such, it is important to explore the relationship between issues such as climate change, the economy, population growth and migration in the region. The talk will further examine the intersectionality of climate change and conflict in Africa, as debated at COP26.

The speaker, Jean-Marc Akakpo, has a doctorate in political science and international conflict management, peacebuilding and development. He is a member of International-Lawyers.Org (INTLawyers) at the UN and a member of the Roundtable on Peace and Health (Mali) at the Carter Center. His specialisation is climate change, conflict and human rights in West and southern Africa. You can register for the event here.

Later on Thursday, at 5pm, Constitution Hill will be hosting a virtual event as an opening for their Human Rights Festival, which begins on 19 March. The event is the first “We, the People” conversation for 2022, and has the theme “Our Constitution: A Doorway to Freedom or a Barrier to Freedom”, unfolding in three parts – Past, Present and Future, said Constitution Hill in a Facebook post on 11 March.

To take part in the event, register here. 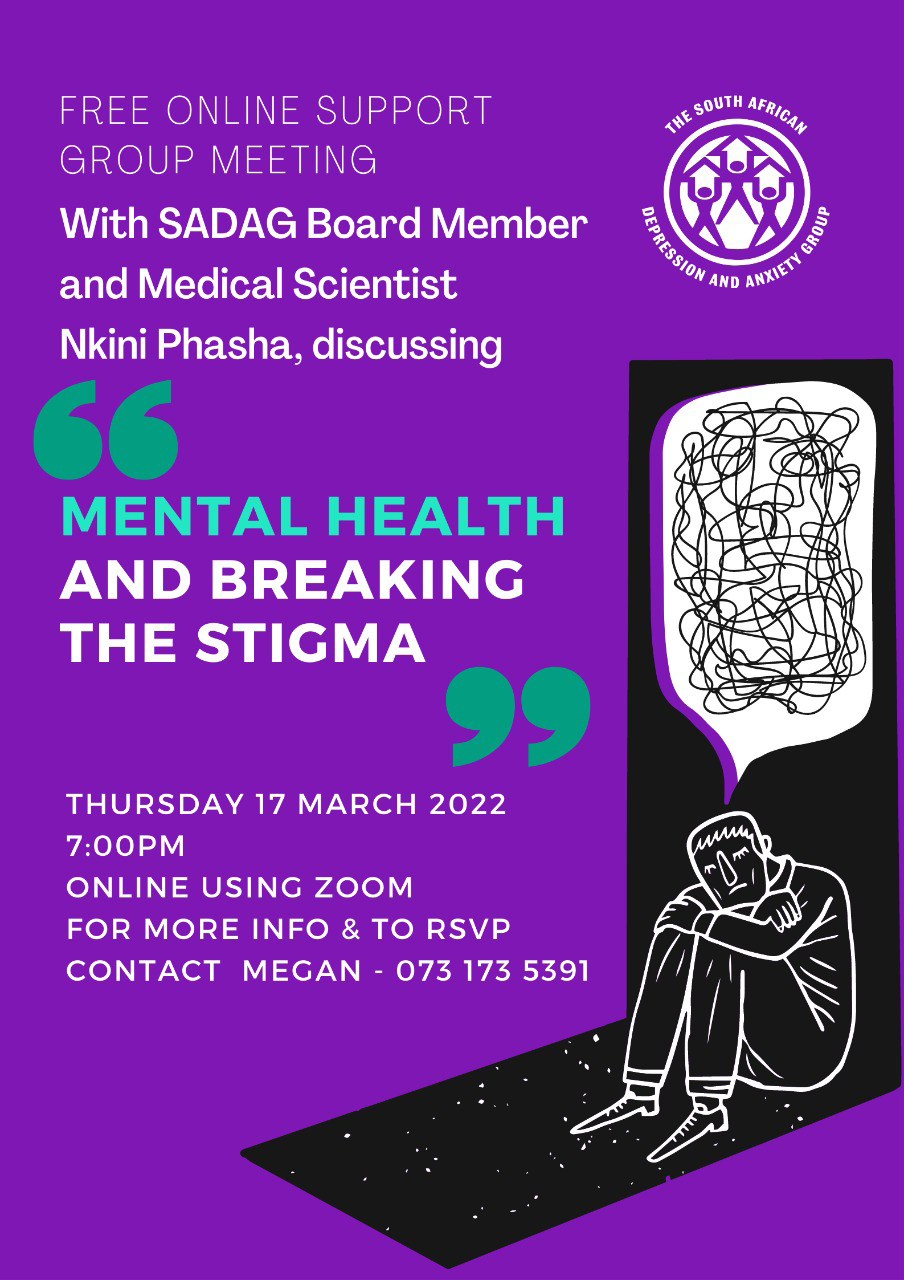 Sadag will be hosting two events on Thursday, both at 7pm. The first is a free online support group meeting with Nkini Phasha, Sadag board member, focusing on “Mental Health and Breaking the Stigma”. RSVP to Megan on 073 173 5391. 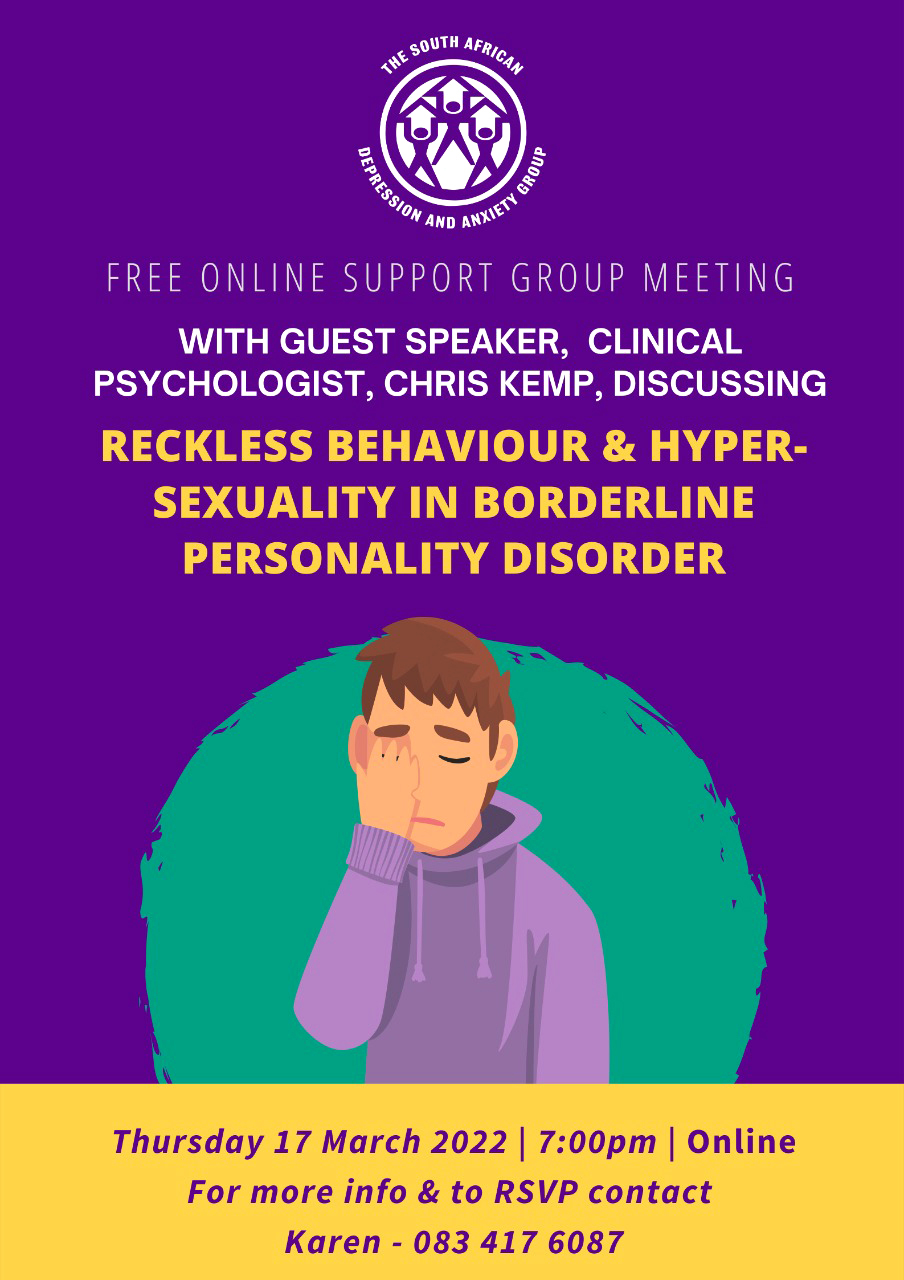 Another free online support group around reckless behaviour and hyper-sexuality in borderline personality disorder will be guided by guest speaker Chris Kemp, a clinical psychologist. For more information contact Karen on 083 417 6087.

On Saturday, 19 March, Constitution Hill’s fourth annual Human Rights Festival begins. It will run until 21 March. Civil society organisations will come together to demonstrate the work they do and educate the public on how to contribute within different human rights spaces.

A series of exhibitions and stalls known as the Activism Village will allow social justice organisations to interact directly with visitors, stimulating public debates and dialogue, according to Constitution Hill. Apart from debates and dialogue, there will also be exhibitions of poetry, dance, music, film and visual art. The arts play an important role creating a culture of human rights, according to Constitution Hill.

“[C]onstitution Hill is built on two pillars, art and justice. This brings together those two components,” said Dawn Robertson, chief executive of Constitution Hill. “We honestly believe that creativity and creatives and young people are going to be the change that we require in South Africa. And that’s what we hope to bring together on the hill for the festival.” 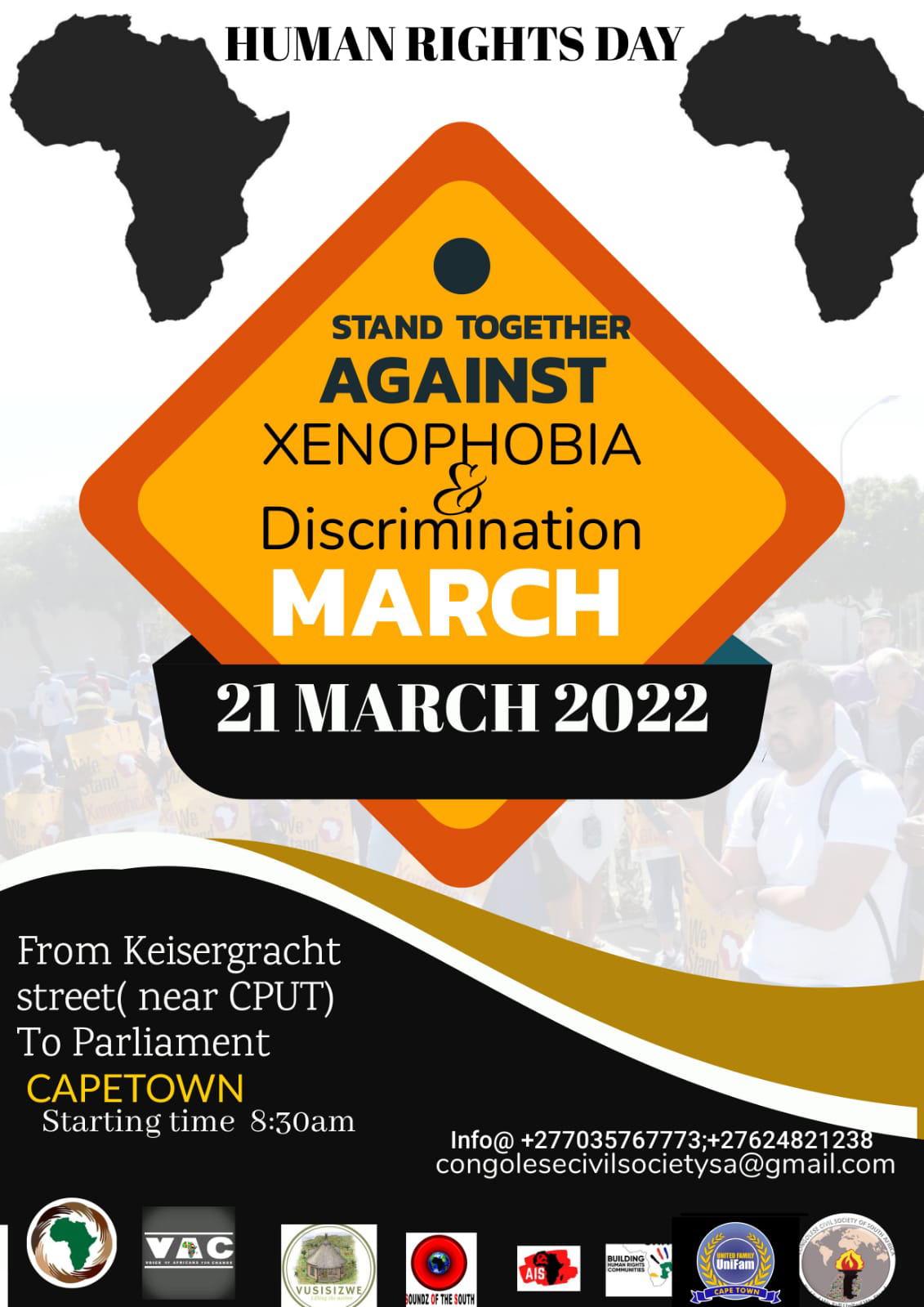 On Monday, 21 March – National Human Rights Day – there will be two marches against xenophobia. The first will begin at Pieter Roos Park in Parktown, Johannesburg at 9am. Organised by Kopanang Africa Against Xenophobia, it is an opportunity to march against an “inhumane capitalist system which fuels narrow nationalism”, according to the organisation.

Another march against xenophobia and discrimination will take place in Cape Town, beginning at Keizersgracht Street near the Cape Peninsula University of Technology and heading to Parliament. It will begin at 8.30am. For more information call 062 482 1238 or email [email protected]. DM