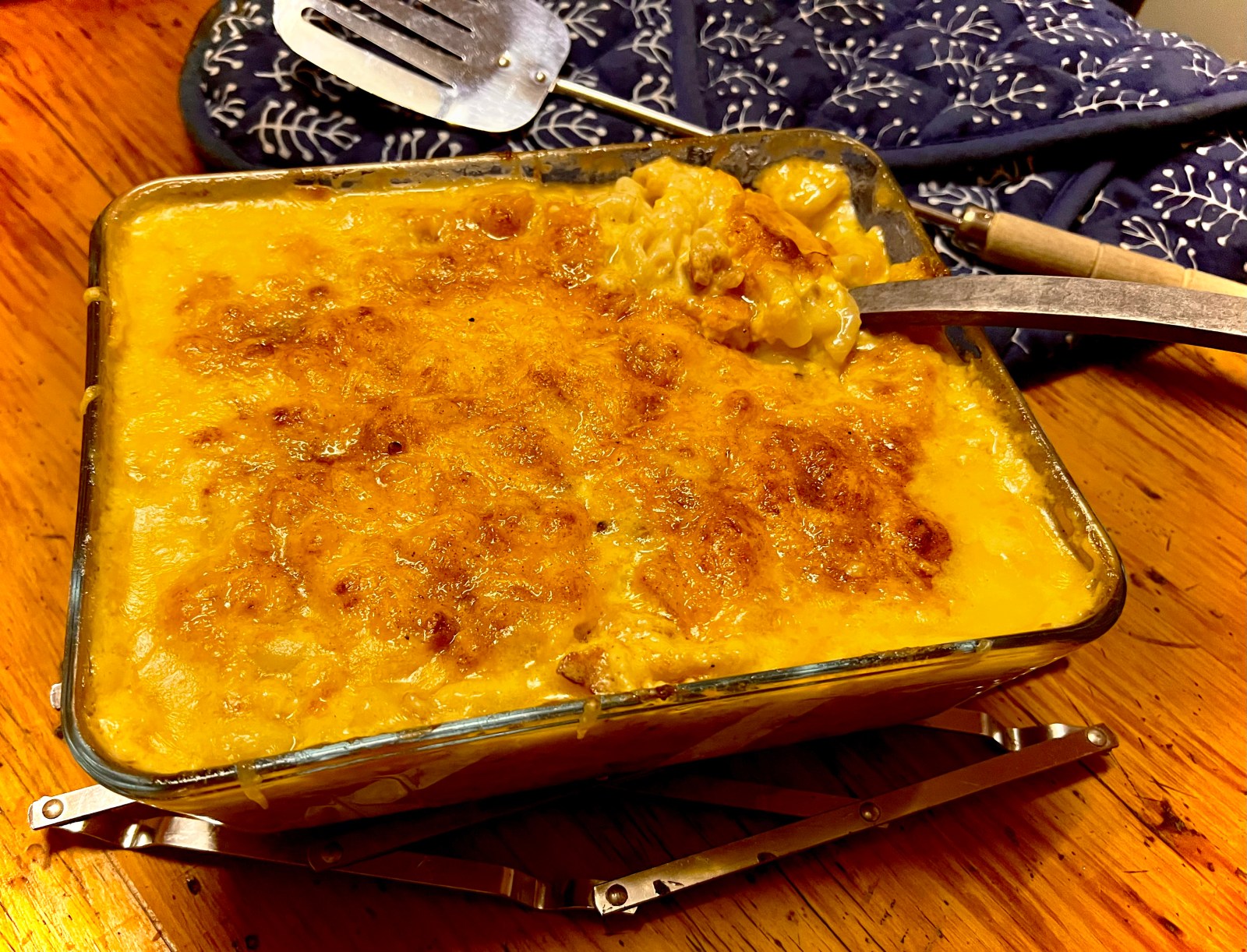 Cheese Mac, Mac Cheese, call it what you will. Either way, its origins may surprise you.

In the Bibliothèque Nationale in Paris are two codices (ancient texts) containing the Liber de Coquina (The Book of Cookery/Cooking, dating to the 14th century), one of the oldest of Medieval texts. It contains a dish of Parmesan and pasta, considered the earliest known form of what we think of today as Macaroni Cheese.

Wikipedia tells us of another book of the same century, a collection of Middle English medieval recipes called the Forme of Cury, the work of the chief master cooks of King Richard II (1377-99). That manuscript contained a reference to a cheese and pasta casserole called makerouns, made, says Wikipedia, “with fresh, hand-cut pasta … sandwiched between a mixture of melted butter and cheese”.

The online encyclopedia even offers an exact quote from it, in Middle English: “Take and make a thynne foyle of dowh and kerve it on pieces, and cast them on boiling water & seeþ it well. take cheese and grate it and butter cast bynethen and above as losyns. and serue forth.” Losyns was a dish a bit like lasagne. Seethe/seeþ means boil. Serue is serve. You’re on your own with bynethen.

But wait, there’s more: Wikipedia is a mine of information about the origins of the dish, citing Elizabeth Raffald’s 1769 book, The Experienced English Housekeeper as the source of “the first modern macaroni cheese”.

“Raffald’s recipe is for a Béchamel sauce with cheddar cheese (a Mornay sauce in French cooking) which is mixed with macaroni, sprinkled with Parmesan, and baked until bubbly and golden.”

Raffald put it thus: “To dress Macaroni with Permasent [Parmesan] Cheese. Boil four Ounces of Macaroni ’till it be quite tender, and lay it on a Sieve to drain, then put it in a Tolling Pan, with about a Gill of good Cream, a Lump of Butter rolled in Flour, boil it five Minutes, pour it on a Plate, lay all over it Permasent Cheese toasted; send it to the Table on a Water Plate, for it soon goes cold.”

A 1784 recipe advised boiling small tubes of macaroni, draining and moving to a frying pan. “Heavy cream is then added to the macaroni along with a knob of butter rolled in flour [a roux, essentially], and it must be cooked for five minutes before being transferred to a dish and topped with toasted Parmesan and pepper.

“The famous British Victorian cookbook Mrs. Beeton’s Book of Household Management included two instances of ‘Macaroni, as usually served with the Cheese Course’. One of them states that the macaroni (which should be ‘tender but perfectly firm, no part being allowed to melt, and the form entirely preserved’, lest one be tempted to cook it for so long it actually disintegrated) is then topped with more cheese, pepper, and breadcrumbs, before receiving a final dose of melted butter for good measure and being placed before a ‘bright fire’ to brown the crumbs, or grilled with a salamander broiler.”

There are reasons that recipes stick around for centuries and do not fade away over time. They have pleased the human palate. They are memorable. And we want more please.

The Forme of Cury, says Wikipedia, is “among the oldest extant English cookery books and the earliest known to mention olive oil, gourds, and spices such as mace and cloves”. Both of which, if you like, you can add to macaroni cheese, which, other than the obvious inclusion of both cheese and macaroni (or elbow pasta, which is the same thing, curved), can be adapted in many ways so that every time you make it you can give it a new twist.

I often add bacon, sometimes onion or garlic or both. Herbs and spices too. Chilli is great in macaroni cheese, and though today the cheese used is most commonly Cheddar or Gruyère, even the choice of cheese or cheeses can switch the dish up in one direction or another. Blue cheese and bacon combine very happily, but many other cheeses can be used too, either singly or in combination, including Gouda, fontina, and mozzarella.

Here’s my way, though I do change it often. I used both Cheddar and smoked mozzarella, and finished it with a topping of fine breadcrumbs and grated Parmesan.

Olive oil for the cooked pasta

Grated Parmesan for the topping

Fry the bacon bits in a little olive oil until browned and keep them aside.

Mix the milk and cream together in a jug. Pour into a heavy saucepan and bring almost to the boil. Melt the butter in another pot, remove it from the heat and stir in the cornflour to make a roux. Put it on a low heat and add a little of the heated butter/cream at a time while stirring, until you have a lovely thick béchamel sauce. Stir the crushed garlic and white pepper into this and season with salt, lightly. Now grate the cheeses and stir them in so that the béchamel becomes a Mornay sauce. Stir in the cooked bacon bits.

Bring plenty of water to the boil in a large deep pot, salt it lightly, add the macaroni, stir with a wooden spoon so that it does not clump, and cook until al dente. Drain.

Pour the cooked pasta into a sizable greased oven dish, pour in the sauce and use two wooden spoons to combine everything nicely.

Grate Parmesan on top and sprinkle fine breadcrumbs over.

Bake until golden and delicious, about 40 minutes. Let it cool on a rack for 20 minutes or so for it to settle and become easier to serve. DM/TGIFood