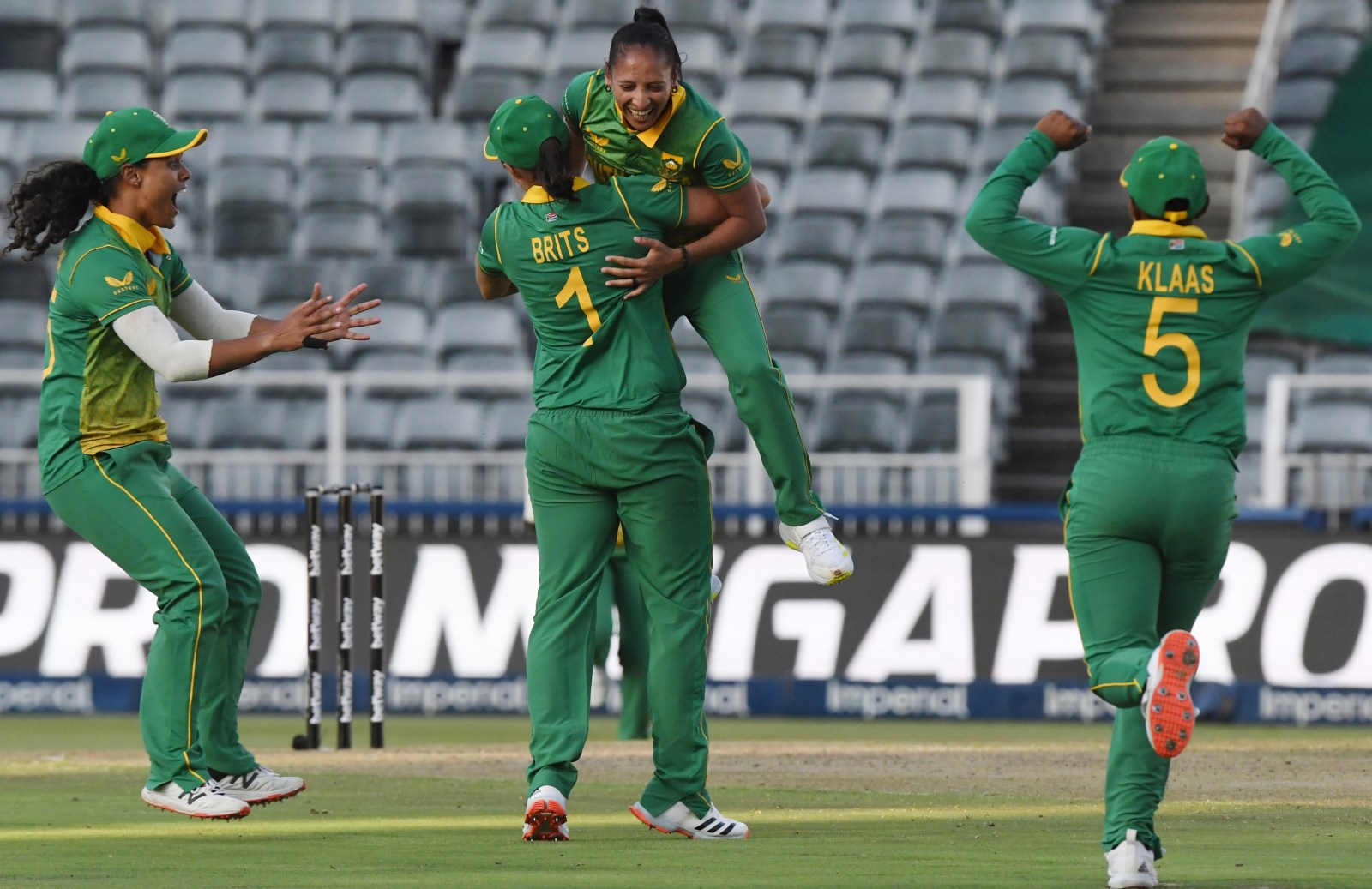 Shabnim Ismail takes a wicket that triggers the super over and celebrate with teammates during the 2nd One Day International match between South Africa and West Indies at Imperial Wanderers Stadium on January 31, 2022 in Johannesburg, South Africa. (Photo by Sydney Seshibedi/Gallo Images)

After some nervous moments in their opening one-day international World Cup game against Bangladesh almost a week ago, the Proteas women are out for a much more assured showing against Pakistan.

The Proteas women head into their 50-over World Cup clash with Pakistan fully aware that their performance needs to go up a notch if they are to claim their second win in the month-long cricket extravaganza.

During their opening World Cup bout the Proteas had to dig deep to overcome tournament debutants Bangladesh, eventually walking away with a slender 32-run victory thanks to the bowling heroics of seamer Ayabonga Khaka.

The top-order batters had failed to help set up a competitive total, with none reaching the 50-run mark. Head coach Hilton Moreeng put the team’s uninspiring performance with the willow down to nerves. He admitted that the display was not ideal, particularly from a side with ambitions of winning their maiden World Cup.

It took a sixth-wicket stand of 71 runs from 68 balls between Marizanne Kapp and vice-captain Chloe Tryon to help the Proteas notch up a total that was ultimately defendable for the bowling attack.

Tryon, speaking ahead of the tone-setting clash with familiar foes Pakistan, acknowledged that the team was not good enough against World Cup rookies Bangladesh.

“It (the performance) was under-par. We discussed it thoroughly and we weren’t happy with our batting performance. We didn’t take enough responsibility and we felt we needed partnerships, which we didn’t have enough of,” the belligerent all-rounder said during the pre-match press conference.

“We definitely worked on that after having those conversations. We went into net sessions to make sure we find ways [to score more runs]. Despite looking at the wicket, which was a bit slow, we still have to find a way to try and make 270-plus on these wickets.”

That the team is likely to have highly rated opener Lizelle Lee back in the saddle should help the pursuit for more runs. The reigning one-day international (ODI) female cricketer of the year missed the Bangladesh clash, but is available for selection against Pakistan.

“It’s great to have Lizelle back. I know she’s been working really hard back home. It’s exciting to have her back in the group. She is a world-class player. We just have to wait and see if she’s going to play,” said Tryon when quizzed about the 29-year-old.

Just more than a year ago the Proteas took on the Pakistanis in a three-match ODI series, whitewashing them. The dangerous Shabnim Ismail took a particular liking to them. The fast bowler claimed seven wickets across the three clashes to walk away as player of the series.

That convincing success in January 2021 took the Proteas’ ODI record against plucky Pakistan to 18 wins from 24 encounters. In spite of this impressive record, Tryon says she and her teammates will not underestimate their opponents – who are winless so far at the World Cup after defeats to India and Australia in their first two matches.

“They do have players that can take the game away from us, so we just have to make sure we do the right things,” the vice-skipper stated.

“We have played enough cricket against them to know what we are up against. They are really a good squad, and we don’t want to take any team here for granted. So, we have to make sure that we are playing our best cricket and make sure that we tick our boxes so we can end up on top.”

The day-night contest begins at 2pm New Zealand time on Friday (3am South African time) and will be broadcast live on SuperSport. DM