‘We do apologise again,’ says Eskom as South Africans grapple with Stage 4 load shedding – and a warning of Stage 6 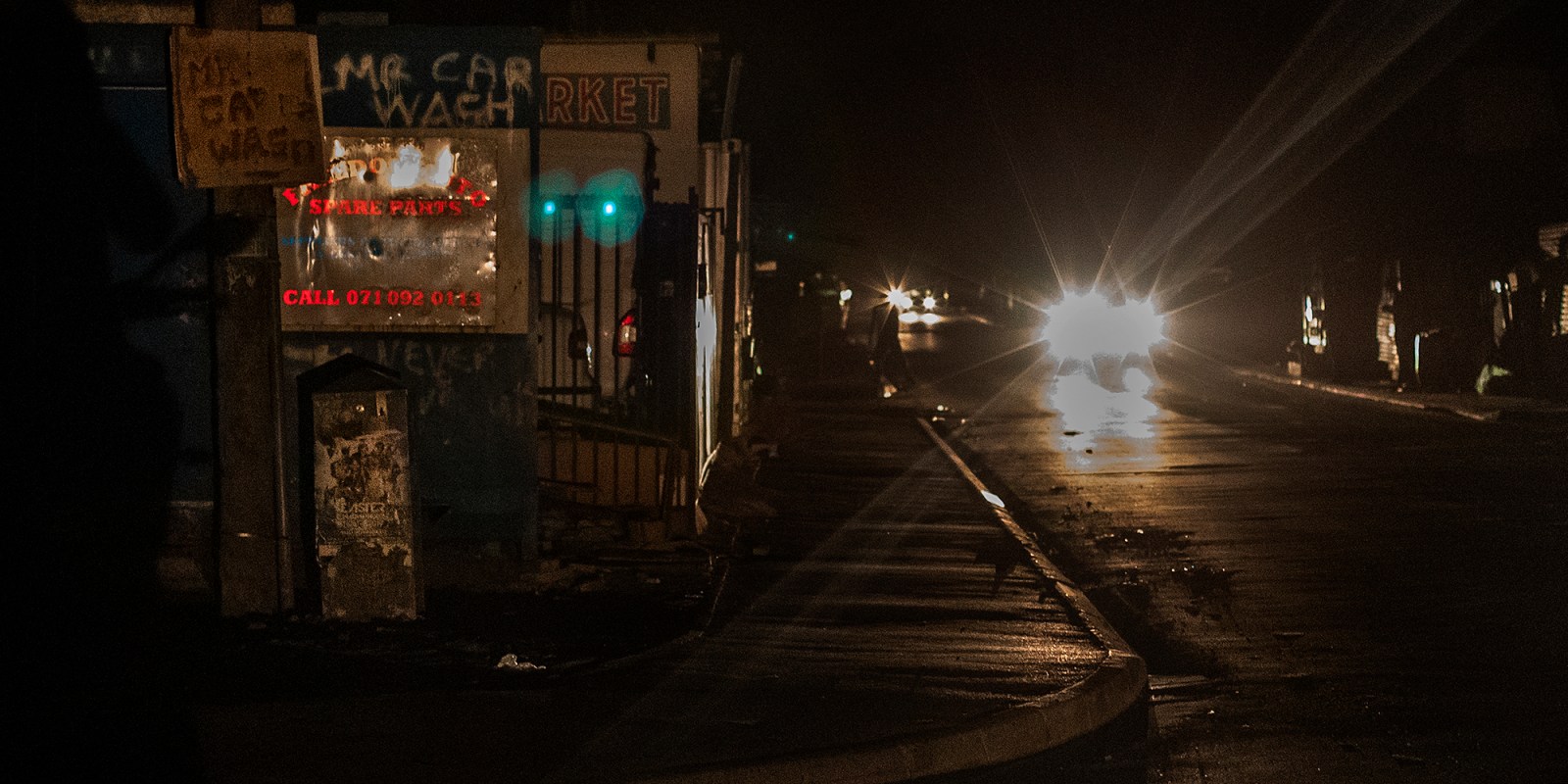 Car headlights are the only sign of illumination on the main street of the Masiphumelele shack settlement in Cape Town during load shedding on 18 March 2019. (Photo: EPA-EFE / Nic Bothma)

Due to further failures of generation units, Eskom announced – “regrettably, and with a great deal of disappointment” – that load shedding would intensify from Stage 2 to 4 on Wednesday. This was to preserve diesel and water supplies at the open cycle gas turbines and pump storage power stations in order to prevent higher stages of load shedding.

On Wednesday morning, Eskom announced that Stage 4 would be implemented from 9am and continue until 5am on Friday. Thereafter, load shedding will be lowered to Stage 2 until 5am on Monday, 14 March.

“We do apologise again for the very difficult situation we are placing the people of South Africa in, and for the negative impact on the economy. However, in order to protect and ensure the integrity of the electrical system, proactive implementation of load shedding is required,” said Eskom COO Jan Oberholzer in his update on the power utility’s current system challenges on Wednesday morning.

Due to further failures of generation units, Stage 4 loadshedding will be implemented from 09:00 today until 05:00 on Friday in order to manage the emergency reserves pic.twitter.com/OMmqjLKIUX

On Wednesday, total breakdowns amounted to 15,439MW while planned maintenance was 5,505MW of capacity.

“Although there has been an improvement in the capacity availability since Tuesday, these numbers do not reflect the significant drop in capacity overnight, when four units at Kendal, Duvha, Camden and Kusile power stations tripped,” said Oberholzer.

This had necessitated the running of its open cycle gas turbines (OCGT) well beyond the peak periods for which they were designed to operate in, in order to replenish the pump storage dams.

Oberholzer added that Eskom had been burning through nine million litres of diesel a day at its Ankerlig and Gourikwa plants, to support the system. This was the fourth day of “extremely high diesel usage”, according to the power utility, and its emergency reserves were being depleted faster than they could be replenished.

“We are using a lot of finances to top up, from an emergency point of view, the capacity of the system – which is not sustainable,” he said.

“Should we run out of diesel at these power stations, this capacity would not be available to supply the demand, which would necessitate a further three stages of load shedding to be implemented, [in addition to whatever stage was being implemented at the time].

“Similarly, our pump storage generation capacity is at 2,700MW, and if the dam levels were to be completely depleted, this would require a further three stages of load shedding.

“The combined effect would be a further six stages of load shedding.”

Oberholzer added: “So, it is critically important to balance these emergency resources, together with load shedding, to ensure we manage the power system safely while keeping the stage of load shedding as low as possible.”

“To limit the further use of open cycle gas turbines, and in order to not deplete the available diesel volumes as well as the pump storage dam levels to dangerously low levels, we regret that we had to implement Stage 4 load shedding this morning,” said Oberholzer.

He said Eskom was evaluating the effect of Russia’s invasion of Ukraine on South Africa’s energy supply.

“We are also taking note of what is happening between Russia and Ukraine and the negative impact that may have on the availability of diesel volumes,” he said.

On Wednesday, train commuters in the Western Cape were stranded when load shedding coincided with vandalism at Eskom’s Tafel Bay substation, affecting Metrorail lines across the province. Due to the interruptions, Metrorail urged commuters to find alternative transport. DM