TALL IN THE SADDLE 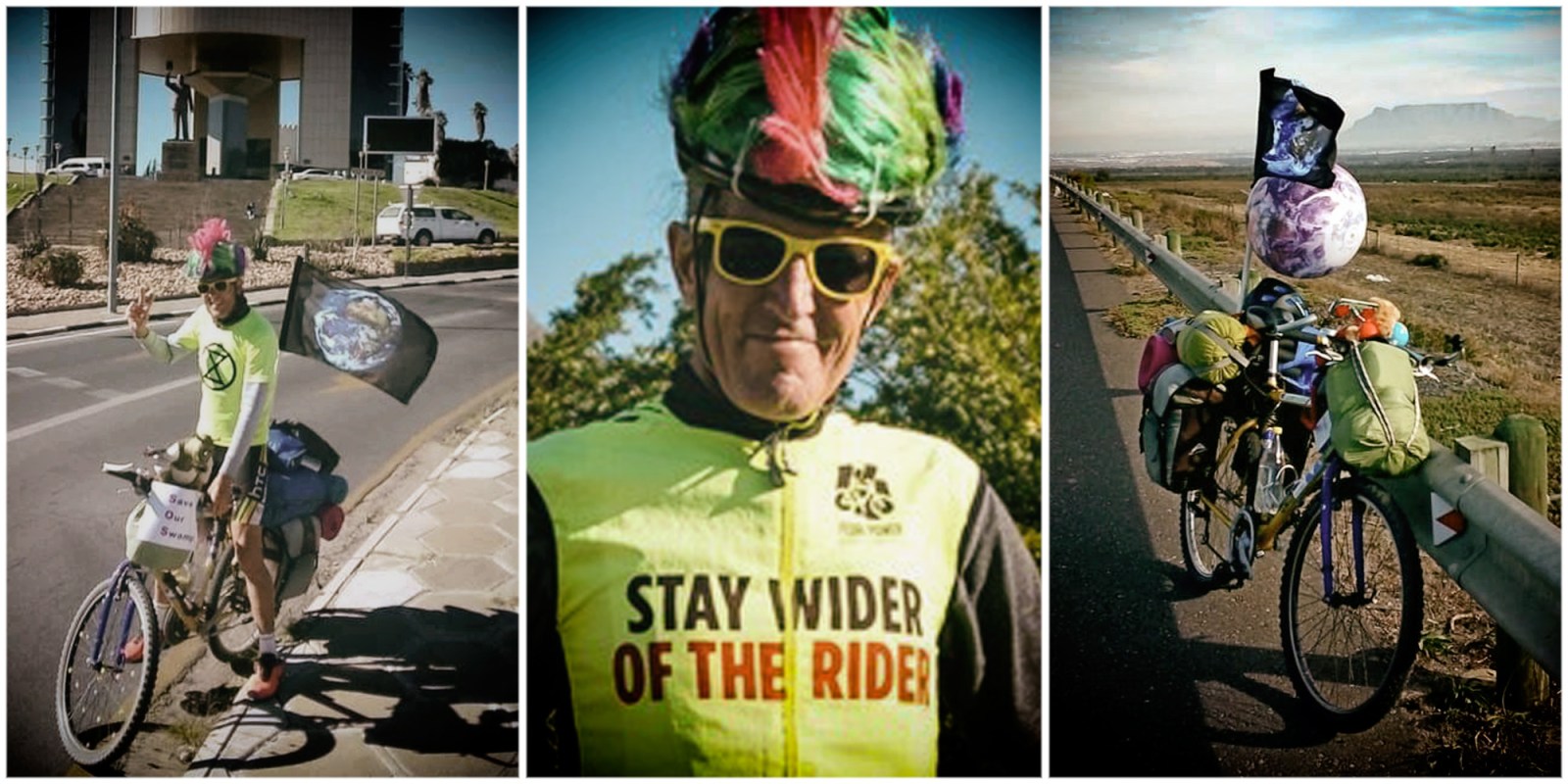 Sven Faultey is cycling from Cape Town to Egypt to hand over a petition to COP27, the UN Climate Change Conference in November 2022. (Photos: Supplied)

A South African environmentalist is cycling from the tip of Africa to the top of the continent to try to stop the extraction of fossil fuels on the continent.

Sven Fautley will spend many hours in the saddle this year as he makes his way from South Africa to Sharm el-Sheikh in Egypt as part of his protest against the extraction of oil and gas on the continent.

Fautley is embarking on a 10,800km bicycle ride from the far south of Africa to a city in one of the countries in the far north.

That city, Sharm el-Sheikh, will host the COP27 climate change conference in November.

Fautley, an environmental activist and veganism promoter, hopes to reach Sharm el-Sheikh in time for the conference armed with a petition filled with signatures against the extraction of oil and gas on the continent and stories of the impact of the climate crisis on people he meets along the way.

Fautley has been working with Greenpeace Africa and Extinction Rebellion since 2019 and it was through that work that he heard about a Canadian company, ReconAfrica, that had begun exploration drilling in Namibia and other explorations in Botswana’s environmentally sensitive Okavango Delta and river basin area.

He decided that, instead of being just another keyboard warrior shouting from the sidelines, he would get on his bicycle and cycle to Namibia to find out first-hand what was going on and amplify the voices of those directly affected.

He resigned from his work as a coordinator in the film industry, sold and donated all his worldly possessions and, with the little money in his bank account and donations he received from family and friends, he set off from Cape Town to Windhoek, taking only what he could carry on his bicycle and a petition signed by people he met along the way to the Environmental Commissioner of Namibia.

When he arrived in Namibia, he realised that his petition would not reflect the signatures of those most affected by ReconAfrica’s exploration, so after handing in his petition, he started another petition, this time to the company itself. He is yet to get a response from either.

Recently, Daily Maverick reported that environmental activists in Namibia say the discovery of oil by Shell will benefit only a few, while the rest of the country is left to shoulder its negative impact on the climate crisis.

“Having been based in Cape Town since the mid-’80s, I left behind many memories, friends and acquaintances from the bulk of my adult life. My mother and eldest brother were also living there at the time,” he said.

ReconAfrica has acquired rights to explore for oil and gas in more than 35,000km2 in the Kavango Basin in Namibia and has an additional licence to explore a large part of northwest Botswana.

“There is international concern that their activities will affect the Kavango/Okavango River that supplies most of the water (more than 95%) to the Okavango Delta. Also, I want to find out more about Total’s EACOP [East African Crude Oil Pipeline] project and see if I could bring some exposure to that,” he said.

He said that on his way to Egypt, he hopes to go to other countries such as Uganda to see the damage being done by the companies that are extracting resources in Africa.

And now that he has visited Namibia and Botswana, Fautley is in Zambia en route to Malawi.

“After finding out that COP27 is returning to Africa this year, and having cycled from Cape Town to COP17 in Durban in 2011, I decided to make Sharm el-Sheikh my final destination, effectively cycling through Africa to reach COP27 and bring testimonies, namely photos, videos and audio interviews from affected people and places along my route to the attention of the international delegates that will be congregating there in November this year,” Fautley said.

Fautley has started an online petition that has attracted 1,251 signatures.

He said Namibia was in “a prime position to generate power from solar, as it is fortunate to have a very high average of sunny days per annum. Hence, it could be exporting green electricity to its neighbours instead of squandering its meagre and precious water resources on fossil fuel extraction.”

He said his message to the global energy companies that wish to invest in Africa is: “Go green or go home.”

“I believe oil extraction in the Kavango Basin will only benefit the rich at the expense of the poor communities,” he said.

He said Africa had endured the abuse of those who seek to exploit the continent’s natural heritage and people.

“Now, Canada wants a piece. We say no. We request that ReconAfrica cease and desist from any further drilling or exploration activities in the Kavango Basin catchment area,” he said.

Fautley said drilling activities pose a serious threat to the quality of the water entering the Okavango Delta and put the entire ecosystem at risk, along with the future of its residents, who depend on this “oasis” in the Kalahari Desert.

Fautley said he had had many incredible wildlife encounters.

“One hot day in southern Namibia, while cycling along a gravel road, I noticed something move as I passed it. Turning back, I was thrilled to discover a puffadder crawling frantically across the road.”

He said one of the setbacks was when his mother, who was supportive of his mission, despite secretly worrying, died while he was in Botswana.

“She encouraged me to live my dreams. Even as she hugged me for the last time on the night before I left, she was excited for my part, always cheering me on.

“I was, in part, an avatar for her, travelling to new places, relaying back to her the images and experiences inherent in this lifestyle. She was also a great confidant for me in challenging times, as we were very close. Maybe it was because we were both Capricorns – her birthday was the day after mine,” he said. DM/OBP