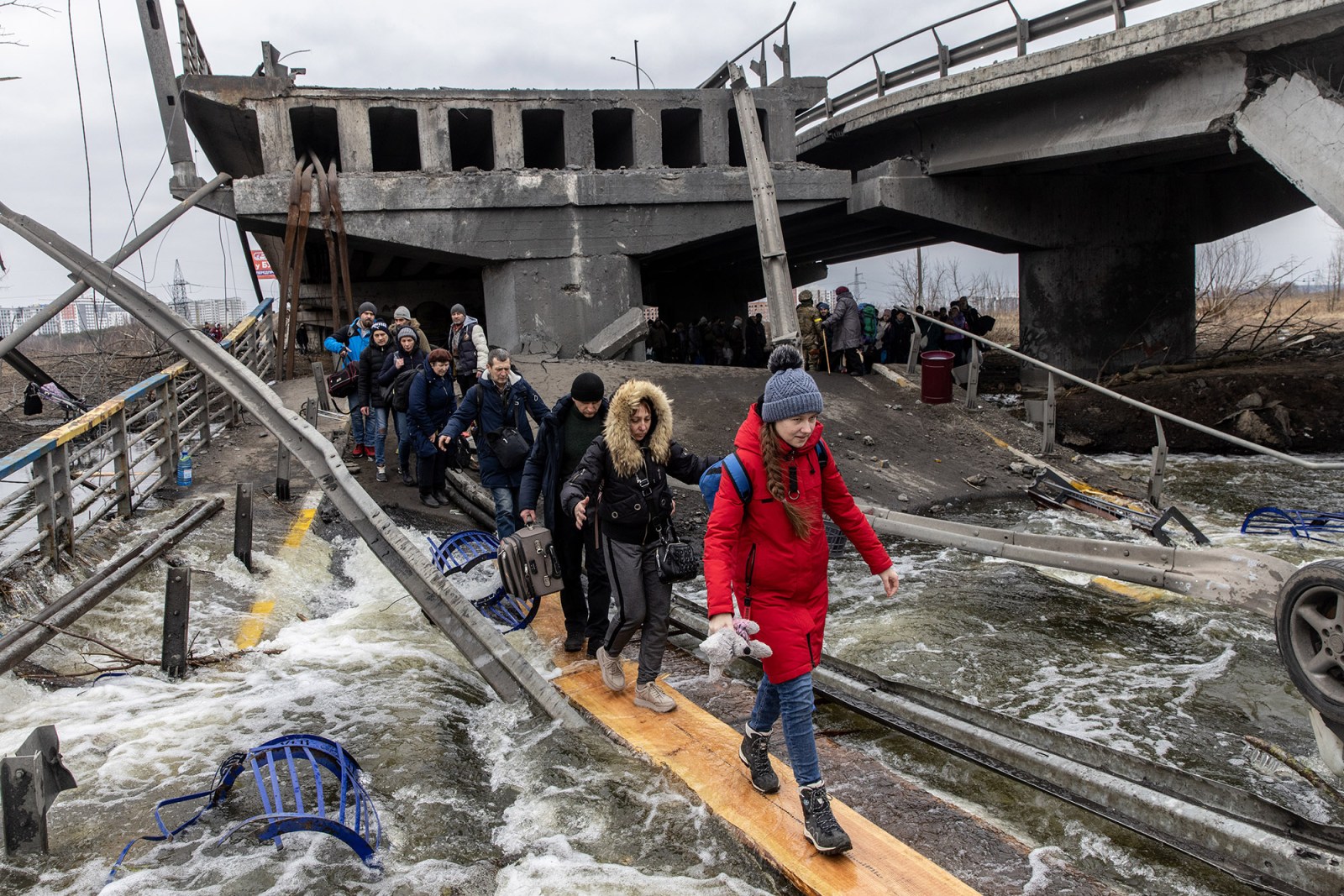 South Africa’s anaemic position on Ukraine highlights the decline of our moral heft and suasion in an increasingly authoritarian world.

Who knows what is worse? The images of toddlers with their noses pressed to refugee train windows, waving goodbye to their dads headed to the Kyiv front. The woman playing What a Beautiful World on a piano in the open square in Lviv as frightened people scurry into the station. Or Russian president Vladimir Putin decrying “nazism” in Ukraine as he emulates Hitler in pursuing a destructive and imperialist ideology.

It is 24/7 horror as the social media age brings a moment-by-moment livestream of war.

A tawdry response from our tattered country

Last week, I went to a discussion at the Constitutional Court about democracy and constitutionalism. That beautiful precinct is also falling into the disrepair that is so common across the beloved country’s public sphere. Untidy tape cordons off areas without explanation. Water flows down stairs. The dusty exhibitions of women leaders in the iconic Women’s Jail have seen better days.

When you enter and leave, you have to dodge potholes that have been made worse by the hard summer rains in Johannesburg. In January, a man wielding a hammer shattered some of the building’s windows and nothing has been heard about it since.

It’s a small mirror, for now, but a mirror nonetheless of a country ravaged by corruption. South Africa is beautiful, but its governance is so tatty that the state is failing. The criminalisation of the state is intense and the battle for power so all-consuming that this fight is present in all public administration policy — even our geopolitical positioning.

In 2021, deputy president David Mabuza spent five weeks in Russia for medical treatment and former president Jacob Zuma almost auctioned off the country to secure a nuclear power station deal with Russia’s Rosatom. He fired two finance ministers who rolled boulders in front of his efforts. Without the bravery of these two ministers and the National Treasury, South Africa’s indebtedness would be much worse than it is now.

The Russian hold is insidious, and not only through our membership of the BRICS group.

The nuclear deal was part of the rubric of corrupt imperialism by a set of mafias who controlled the state at national and sub-national levels. The pro-Russian sentiment infiltrated the capture of intelligence where old Soviet political ties morphed into pro-oligarch affiliations. The evidence of these ties is present in energy, mining, information (and disinformation) and even in pharmaceuticals.

In the ANC NEC last year, for example, a sizeable faction wanted South Africa to hold out for the Russian Sputnik vaccine — part of Putin’s pharma push into the continent. It is no surprise, therefore, that South Africa has dithered in its response to the war on Ukraine.

South Africa’s geopolitical positioning has often been small, but significant. Our country’s democratic founding story and our Constitution have given South Africa moral suasion and human rights heft beyond our size.

In 1995, when Ogoni activist Ken Saro-Wiwa was executed by the regime of General Sani Abacha, Mandela spoke out. He did so again and again, criticising the US invasion of Iraq, too, when such a position was extremely unpopular among the Western governments who supported it.

Since then, successive governments have whittled down that heft through, for example, former president Thabo Mbeki’s inability to speak against human rights abuses in Zimbabwe.

The UN Security Council’s voting record reveals that the abstention on Ukraine, explained here by President Cyril Ramaphosa, is now par for the course. It’s a tatty international policy that betrays South Africa’s recent history and shames many of us, except for a vocal faction allied either to history (the ANC’s support and solidarity from the Soviet Union) or to the current positioning of Russia in South Africa.

Ramaphosa and others, like South Africa’s head of public diplomacy, Clayson Monyela, have tried to finesse the country’s position into a concern for the fair-handed treatment of all wars and imperial impositions in today’s world.

Read in Daily Maverick: SA’s response to Russia’s invasion of Ukraine exposes the moral and strategic incoherence of our foreign policy

It’s true that the US and Europe’s hypocrisy on Palestine is X-rayed by its opposition to the Ukraine war. It’s true that the world has not paid the same attention to the bombing of Yemen, Syria and the collapse in real time in Afghanistan. It’s true that Western Sahrawi’s fight for self-determination is a lonely battle in the sand — as is the everlasting war in the DRC.

Might a humanist perspective offer us the possibility of being “and, and” — of supporting the people of Ukraine and of Palestine; of Syria and Ukraine; of feeling an equal human pain and compassion for the refugees of Kabul and Kyiv?

Gift of the Givers

Increasingly, the humanitarian organisation Gift of the Givers represents the global humanism inspired by the Mandela presidency and which underwrites the Constitution of South Africa.

At the weekend, the organisation announced a fund for Ukraine without fanfare or trumpeting. In an interview on SAfm with Stephen Grootes, Dr Imtiaz Sooliman explained the universalist principles to which the organisation subscribes. It helps wherever there is human suffering and where its network can quickly be built. Gift works across our continent and worked in theatres of war from Bosnia to Syria and more. It doesn’t second-guess itself or tie itself up in ideological knots dependent on spherical global interests.

South Africa’s government is, of course, not a humanitarian organisation and it has protected its self-interest.  But, as Rebecca Davis points out here, trade among BRICS nations (Brazil, Russia, India, China and South Africa) with SA is small.

South Africa’s anaemic position on Ukraine highlights the decline of our moral heft and suasion, not only in the amphitheatres of war, but also in a world that is increasingly authoritarian. DM