We need to talk about refugeeism, the Ukraine crisis must serve as ‘a time of awakening’ 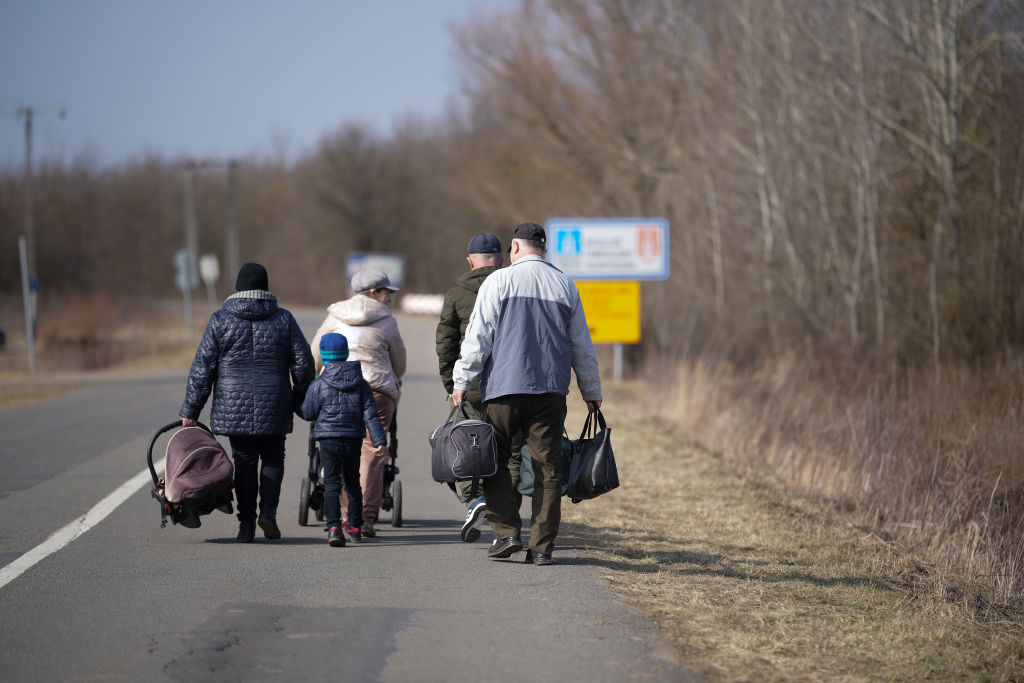 A family of Ukrainian refugees walk along the road after walking across the border at the Hungarian town of Lonya on March 03, 2022 in Lonya, Hungary. Over one million refugees from Ukraine have now fled into neighbouring countries such as Hungary, forming long queues at border crossings, after Russia began a large-scale attack on Ukraine on February 24, 2022. (Photo by Christopher Furlong/Getty Images)

‘Becoming a refugee is no one’s first choice. It is always the last and it’s always the only option that they have left,’ says Malala Yousafzai. Here are three podcasts that unpack how the influx of refugees coming from invaded Ukraine can – and should – change the way refugees are treated.

Earlier this week, in a conversation with The Economist’s editor-in-chief, Zanny Minton Beddoes, Nobel Peace Prize laureate Malala Yousafzai expressed her hopes that the Ukrainian crisis would serve as a “time of awakening, for all of us, about how these conflicts affect so many countries”.

“Becoming a refugee is no one’s first choice. It is always the last and it’s always the only option that they have left,” Yousafzai says.

As the Russian invasion presses on into Ukraine, hundreds of thousands of people are fleeing for their lives – more than a million have already crossed Ukraine’s borders into safe, neighbouring countries.

This terrible crisis has raised questions about refugeeism and migrancy and the willingness of states to help some people but not others.

Here are three podcasts that put these questions at the centre of their discussions, making for engaging and thought-provoking shows.

Each episode offers different perspectives on the world’s refugee crisis. This is absolutely not to say that Ukrainian refugees do not need or deserve support, to the contrary, the podcasts encourage empathy in how we approach all migrants, not just a select few.

Double standards in coverage, policy around refugees – The World

In this short, punchy episode, host Carol Hills discusses with Dr HA Hellyer about how the way refugeeism is spoken about is a vital reflection of how refugees are treated around the world.

Hellyer specialises in politics, international studies and religion in the West and the Arab world, and his passion for his field is tangible in his commentary about the double standards seen in both policy and news coverage of refugeeism.

The episode is only six minutes in length but it packs a punch. It challenges the listener to think critically about crises and the way the world deals with them, and Hellyer does not back away from uncomfortable conversations.

Instead, he asks the listener to question why the response to Ukrainian refugees has been so vastly different to how refugees are treated and reported on in other crises.

“When we’ve had refugee flows over the past decade and more, we didn’t see the same sort of government policies and media coverage as we are seeing right now.

“We have to ask ourselves, why did we not behave like this when even Russians were engaged in terrible actions in Syria? Was it simply because they were not white and Christian?” he asks.

Hellyer is not unsympathetic, merely realistic. He assures that he is not trying to get Russia off the hook for the atrocities it is committing, nor is he trying to diminish the suffering of millions of Ukrainians. Rather, he is asking for people to take a step back and thoughtfully question beliefs and attitudes.

Europe’s Refugee Hypocrisy – What Next

In this episode of What Next, host Mary Harris speaks with philosophy professor Dr Serena Parekh about the lessons that can be learned from the Ukrainian refugee crisis.

This plan, while it is a step in the right direction towards refugee rights, is also hypocritical. The opportunity to live and work in a host country, as well as receive social benefits, is something most refugees never see, Parekh says. It is not all doom and gloom, though, and the current plans could change the way asylum seekers are treated in the future – if it inspires sympathy towards all refugees, not just a select few.

The podcast is practical, but also uncomfortable. The show includes audio clips from news reports that are downright chilling. In one segment, the listener hears CBS News senior foreign correspondent Charlie D’Agata share his take on the Ukrainian refugee crisis:

“These are prosperous, middle-class people. These are not people trying to get away from areas in North Africa. They look like any European family that you would live next door to. This isn’t a place, with all due respect, like Iraq or Afghanistan. This is a relatively civilised, relatively European (I have to choose those words carefully too) city, where you wouldn’t expect that or hope that it’s going to happen.”

In an opinion piece for The Guardian in response to D’Agata’s (and others’) words, Moustafa Bayoumi sums the situation up perfectly: “These comments point to a pernicious racism that permeates today’s war coverage and seeps into its fabric like a stain that won’t go away.”

For the listener, the show is an opportunity to evaluate how bias infiltrates reporting and discussion, and how this has consequences on the way people are treated and are able to live, making for a thought-provoking and important listen.

Standing up for the world’s refugees from Afghanistan to Ukraine, with Rory Stewart – New Statesman

In this conversation, host Emily Tamkin speaks with the former UK international development minister Rory Stewart about the discrepancies between how refugees are treated across the world and how a change in perspective on refugeeism is needed to build a better future.

Stewart is the champion of a new global coalition initiative on refugeeism which proposes that every country that joins should take in refugees equivalent to 0.05% of their population every year, within two years of joining. The aim is for multiple countries to be open to sharing the burden of the rise in people seeking asylum, while at the same time guaranteeing a home for vulnerable people.

He has been working on this initiative since before the Russian invasion of Ukraine, but the current crisis is a good lens to evaluate his plan.

The episode is conversational and informative and takes a practical, policy-focused approach to crisis and refugeeism.

It is high time to form a global refugee coalition. Committing to take refugee numbers equivalent to .05 % of their population annually would transform the global system. Canada is already there, the US is close. This is the moment for the US, UK, Germany to show moral leadership https://t.co/OZUSX30HHs

According to Stewart, nations working together to support refugees is “an opportunity for democracies to demonstrate their values” and to exercise their influence in a way that reflects those values.

This listen is an interesting take on the crisis and adds perspective on what the public can hold governments to account for. DM/ML