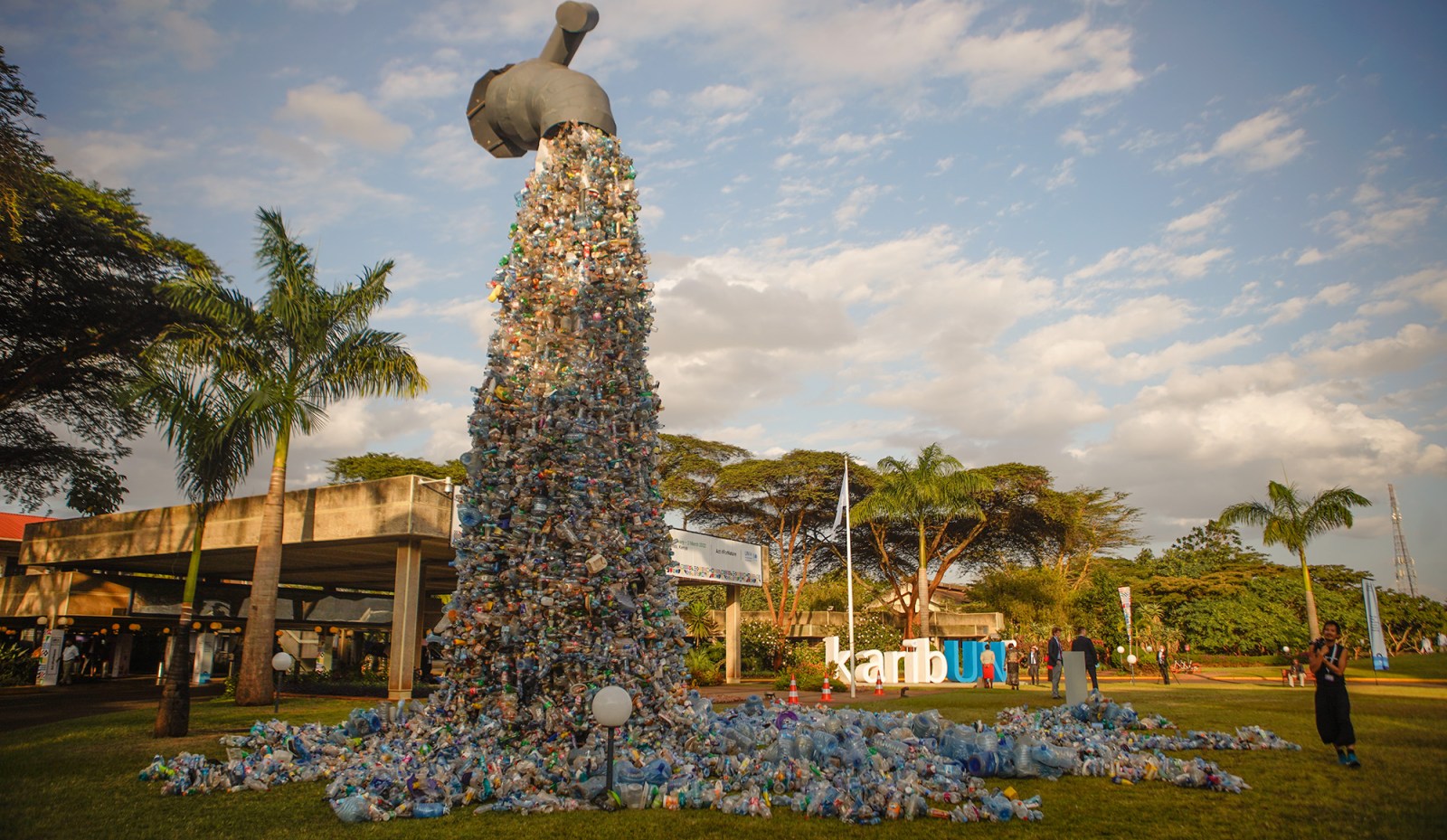 An installation by artist Benjamin Von Wong made from recycled plastic collected by Kenyan women from Kibera, the largest slum in Africa. (Photo: Flickr / UNEP)

The first legally binding draft treaty on plastic has been adopted, laying the foundation for more controlled use of the material that has been at the forefront of environmental harm.

The bang of a gavel made from recycled plastic signalled the making of history as the United Nations Environment Assembly 5 (Unea-5) in Nairobi, Kenya, adopted a draft resolution to end plastic pollution in a legally binding treaty that addresses the lifecycle of the fossil fuel byproduct.

“We are making history and I am very proud,” said Espen Barth Eide, the Unea-5 president and Norway’s Minister for Climate and the Environment, as the room roared with excitement, while some shed tears of joy that signalled a spirit of hope.

In summary, the draft treaty, titled “End Plastic Pollution: Towards an Internationally Legally Binding Instrument”, is the beginning of a negotiating process that seeks to end plastic pollution. It seeks to address how plastic is produced, recycled, processed, used and how it is collected.

The draft resolution also addresses how the public and private sectors can begin to manage a just transition towards a circular economy, while acknowledging the effect that the material has on marine life.

A recognition of the transboundary nature of plastic has been included in the draft treaty as well as financing mechanisms for implementation and access to technology and scientific cooperation. Goal-setting, measuring mechanisms, transparency, accountability and speed of implementation are some of the matters yet to be addressed by the treaty, Inger Andersen, the executive director of the UN Environment Programme, said at a press conference

“The bottom line is, we will eliminate plastic pollution from our environment, and that is critical. Without a doubt, this is a very big decision, and one that was not a given at Unea-4 — one that has taken a lot of hard work and has taken great leadership by many countries, ministers, NGOs, activists and indeed waste pickers,” Andersen said.

The resolution, originally proposed by Peru and Rwanda alongside supporting states, is the first of its kind and tackles the waste associated with plastic throughout the material’s life cycle; from source to sea.

South Africa’s Cabinet supported the draft treaty ahead of the negotiations, which concluded on Wednesday, saying the country would plead “special circumstances” and request financing to implement it.

Never before has the UN adopted a legally binding treaty on plastic waste; a move that has been touted as the most progressive environmental agreement since the 2015 Paris Agreement that seeks to keep global temperatures below 1.5°C.

Countries that have adopted the draft treaty, which was unanimously agreed on by the 193 UN member states, have until 2024 to conclude it. The draft agreement was one of 14 other resolutions adopted, with one of them including setting up a scientific panel to address the chemical waste associated with plastic, and another focusing on nature-based solutions to protect ecosystems.

Plastic became a global industry valued at about $580-billion in 2020 after production had quadrupled over the previous 30 years and doubled between 2000 and 2019 to 460 million tonnes. Some of the biggest producers of plastic have been lobbying against the treaty, citing alternative facts on health, among other reasons.

The production of plastic is expected to double by 2040. It poses a threat to environmental, human and marine life in its production and the poor regulation of its disposal, with recycling rates of 9% outweighing production rates.

“Our work is far from over — world leaders must now show even more resolve in developing and implementing a treaty which addresses our current plastic pollution crisis and enables an effective transition to a circular economy for plastic.

“This requires not just any treaty, but one with clear and strong global standards and targets that will create a level playing field that incentivises nations to abide by common rules and regulations while also penalising harmful products and practices,” said WWF Director-General Marco Lambertini. DM/OBP

Daily Maverick’s presence in Kenya was made possible by the support of the United Nations Environment Assembly.