Something old, something new as Proteas secure stunning...

Something old, something new as Proteas complete stunning victory over NZ 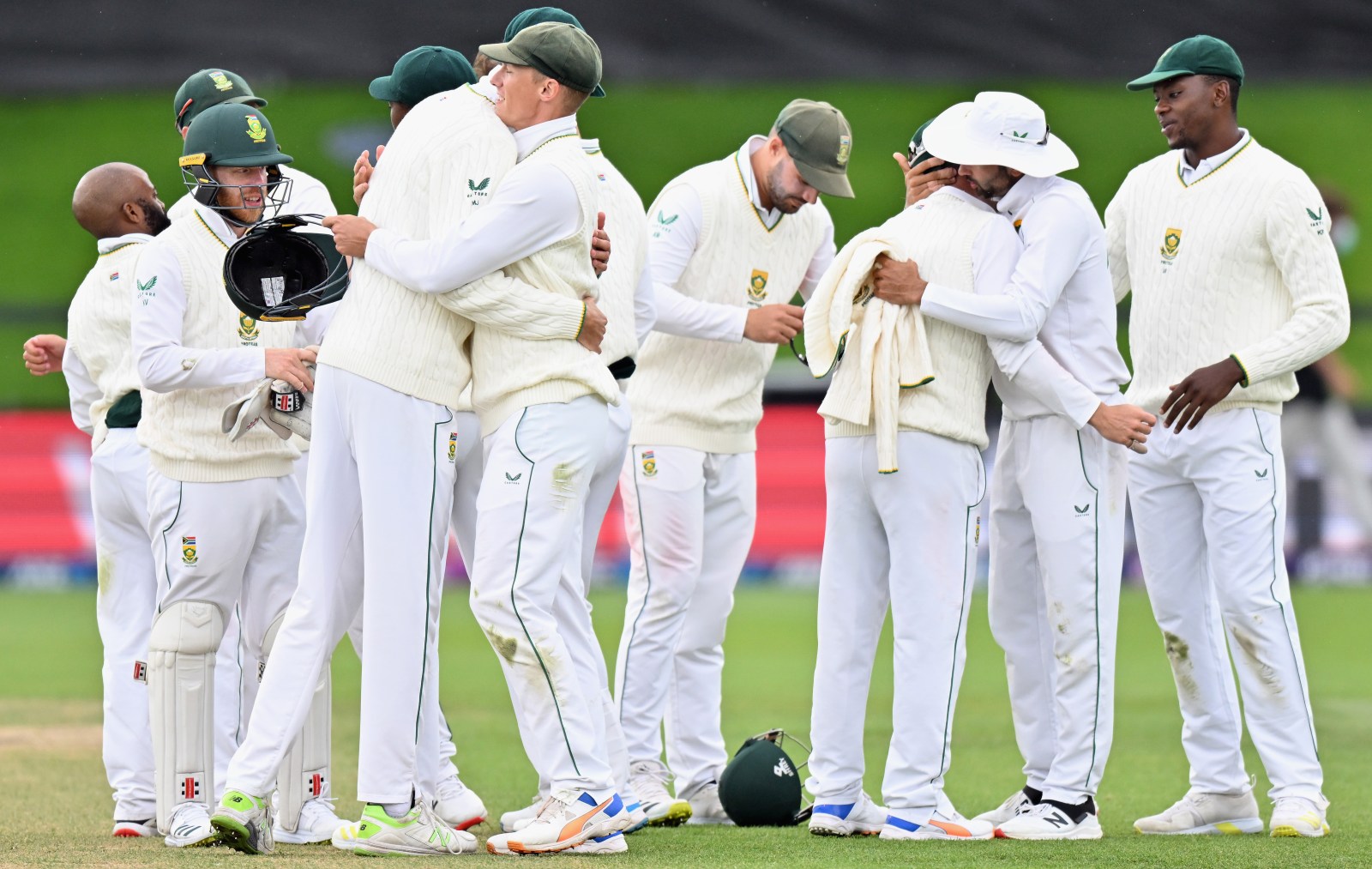 Kagiso Rabada of South Africa (R) and his team mates celebrate their win during day five of the Second Test Match in the series between New Zealand and South Africa at Hagley Oval on March 01, 2022 in Christchurch, New Zealand. (Photo by Kai Schwoerer/Getty Images)

The term ‘resilience’ is often glibly thrown about, especially in the sporting arena. But there is little doubt that the Proteas displayed plenty of resilience and character as they completed a superb 198-run win over New Zealand’s Black Caps in Christchurch on Tuesday to share the spoils at 1-1 in the short series.

After being trounced by an innings and 276 runs in the first Test, due in no small part to their horrendous build-up to the match, South Africa could easily have disappeared in the second Test. But rolling over is not in the nature of this team as they bounced back in stunning style.

They are not immune from bad days, they still have many weaknesses and they are some way from being a great team, yet they are battlers. They play for each other and for the badge and despite all the structural weaknesses in South African cricket, and all the boardroom issues that have plagued the game for years, they find a way.

Fast bowler Kagiso Rabada led from the front with eight for 106 in the match at the Hagley Oval, including five for 60 in the first innings, underlining his importance to the bowling unit and the team.

With a green backup seaming cast of Marco Jansen, Lutho Sipamla and Wiaan Mulder, Rabada shoulders more responsibility than any other strike bowler in the world. And he almost always delivers.

With his wickets, especially two early strikes in New Zealand’s first innings of 293, and a breezy 47 off 34 balls with the bat in the second innings, which was crucial in the context of the match, Rabada set the tone.

Jansen took seven wickets in the match while Sipamla bowled some key spells without much luck. He did knock over New Zealand’s star batter Devon Conway, on 92, with a brutal inswinger just before lunch on day five.

It was a crucial breakthrough, which ended an 85-run fifth-wicket stand between Conway and Tom Blundell. The next five wickets fell for the addition of just 61 runs as the visitors wrapped up the match under greying skies.

Left-arm spinner Keshav Maharaj also lent his considerable experience in the winning cause. He took vital wickets at vital times and in so doing, joined Paul Adams as South Africa’s leading spinning wicket-taker with 134.

“If you have a look at previous (SA) teams, the word that always fits us best is resilience,” Rabada said after the match. “It was never easy to just beat us in a Test, and we proved that again.

“It’s very seldom that you feel at your best. “It’s all about adapting and trusting your strengths, and trying to do all you can. You try to create your own luck with hard work and tactical thinking, and let the rest just happen. It’s about trying to stick to the process and keep refining.”

New Zealand had won eight of their previous 10 Tests at the venue, with one draw and one loss. Three of those victories, including the first Test against South Africa, were by an innings. For the Proteas to turn it around they needed some big performances, belief, courage and a little luck.

The strokes of luck they enjoyed came at the toss and with the weather. Barring a short break late on day five, there was no rain, which ensured there would be a result.

The other, earlier bit of luck was when captain Dean Elgar won his first coin toss since becoming Test skipper. He then demonstrated courage and belief, in both himself and in the brittle batting unit, by choosing to bat first.

At a venue that favours seamers, especially New Zealand’s skilled quartet, it was a bold call. Elgar’s decision was generally considered to be a bad one by local pundits with more knowledge of the surface. But the second Test pitch was not as green as the adjacent strip had been for the first Test and Elgar, with Maharaj in the lineup, rightly banked on the fact that batting last would be more difficult.

“Visually, the pitch looked a lot different to the first Test,” Elgar said after the match. “It wasn’t as green. There was a lot less green grass and browner grass on the wicket. It looked a little bit like a bat-first wicket.

“But because of what happened in the first Test, the easy soft decision would have been to bowl first if we won the toss. My nature, my character is not to take the easy way out, but to run towards the pressure that you’re facing.

“Sometimes you’ve got to make these tough calls for your squad, and it was great to see the guys respond. Although it worked out and it played nicely in our favour, New Zealand’s bowlers still posed quite a tough challenge for us upfront.”

Elgar and Sarel Erwee put on 111 for the first wicket, which set the Proteas up for a total of 364 — the first time they’d gone beyond 300 batting first in nearly four years.

The maligned batters also rose after a chastening first Test ordeal. Erwee, playing only his first Test, scored 108 in the first innings. Wicketkeeper Kyle Verreynne then added 136 not out in the second innings as the Proteas amassed 354 for nine before declaring. That left New Zealand needing an unlikely 426 to win, or to bat out four sessions.

The Proteas were in front throughout five pulsating days of cricket at the Hagley Oval, and the only disappointment is that there isn’t a third and deciding Test to separate the teams.

“Coming to New Zealand, I think at the start of the series I would have taken one-all,” Elgar said. “Be that as it may, we didn’t start very well.

So, it’s a little bit difficult to take things after that first Test because there were so many lessons and we didn’t really pitch up in that first game. But to see the guys show a lot of character, a lot of growth and maturity and to get the win the way we did in the last Test is brilliant for us.”

After 16 Test series between New Zealand and South Africa, the Kiwis are still winless. DM