Proteas were poor in first Test against Black Caps, but...

Proteas were poor in first Test against Black Caps, but it’s worth pondering why 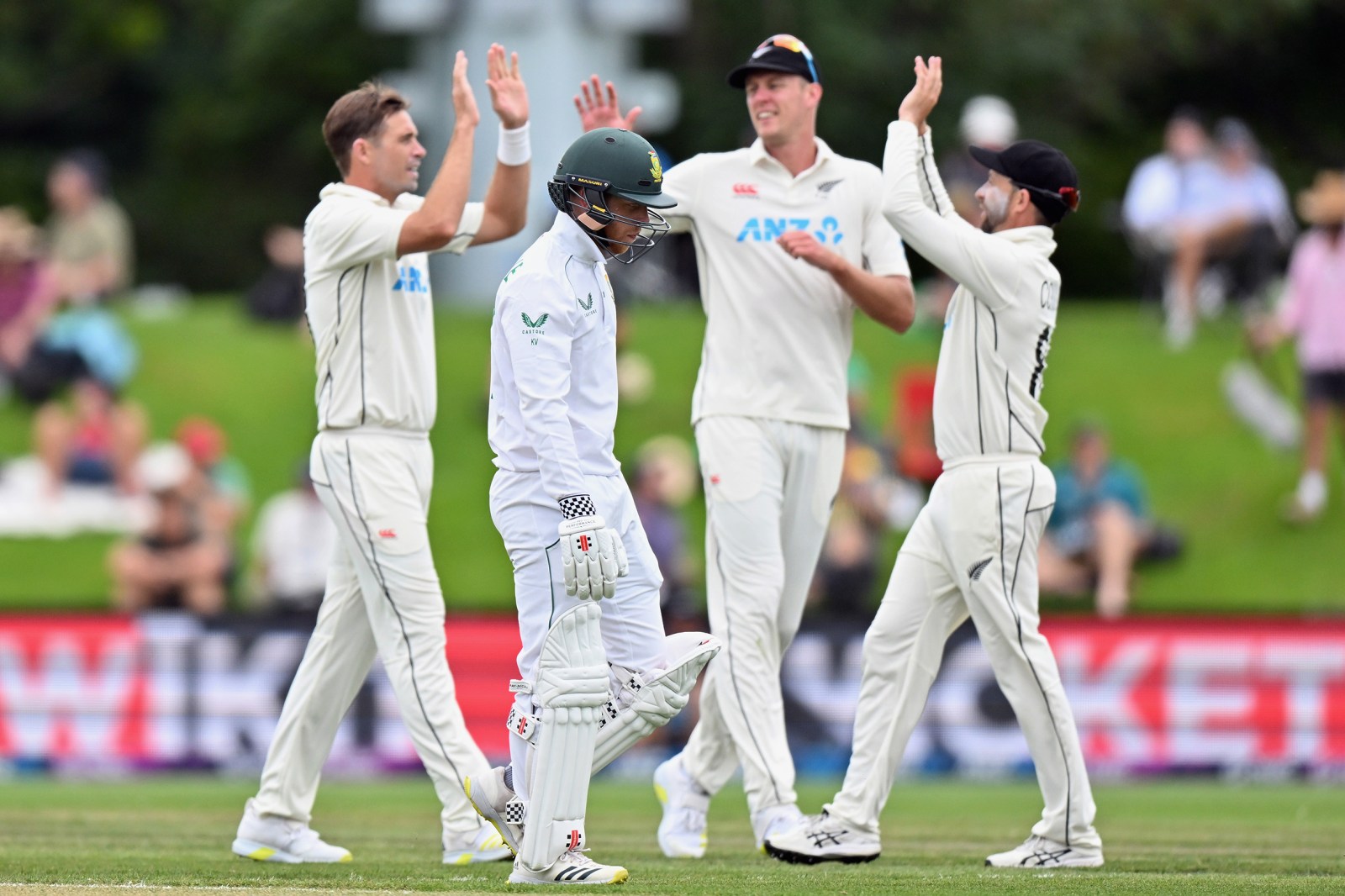 Kyle Verreynne of South Africa looks dejected after being dismissed by Tim Southee of New Zealand during day three of the first Test match in the series between New Zealand and South Africa at Hagley Oval on 19 February 2022 in Christchurch, New Zealand. (Photo: Kai Schwoerer / Getty Images)

South Africa’s crushing innings and 276-run defeat against New Zealand’s Black Caps in Christchurch on Saturday, 19 February, were more comprehensive than expected, but inevitable given the build-up.

It was the great Scottish rugby coach Jim Telfer who warned his British & Irish Lions team before the first Test against the Springboks in South Africa in 1997 that only a dishonest man looks for excuses.

It’s a mantra the South African cricket team has apparently adopted after their chastening thrashing at the hands of the World Test Champions in New Zealand. They certainly could line up myriad excuses for the nature of the defeat, if not the loss itself.

A little more than a month ago the Proteas completed a 2-1 series win over India at Newlands. India arrived in South Africa as the No 1-ranked Test team in the world and convincingly won the first Test, before losing the next two.

After the first Test defeat at Centurion, the Proteas didn’t offer up excuses, even though they had not had a match together for months. They weren’t good enough, they said, but they knew they could and would perform at a higher level given more time in the middle as the series wore on. Boucher and Elgar were correct in their long-term view against India.

Against New Zealand the series is only over two matches, so there isn’t much time to turn it around. But like a three-Test series, after losing the first one, you can’t afford to lose the second, so in that sense the pressure is the same for the Proteas heading into Friday’s second Test at the same Hagley Oval as it was against India.

Despite the thrashing inside three days that saw South Africa dismissed for 95 and 111 while New Zealand piled on 482, there is one certainty. The Proteas will be more prepared. Mentally prepared, that is.

Before the first Test Elgar and batter Rassie van der Dussen alluded to the difficulty of the 10-day quarantine they endured. “I hope we never have to go through that again,” Van der Dussen said before the match.

The squad arrived in Christchurch via Singapore and Auckland, and immediately went into complete solitary confinement in small rooms, with a 30-minute period per day to step outdoors.

Remember, the first 48 hours are a crucial time in jet lag recovery with an 11-hour time difference. Normally, when travelling to the other side of the world, you’d be trying to get some sun, do outdoor exercise and force yourself to stay awake at the appropriate times to adjust to local time.

That must have been incredibly difficult to manage when sealed in a basic Managed Isolation and Quarantine (MIQ) facility. The players literally had a chair and bed in their rooms. Imagine trying to stay awake when the body clock is saying it’s 2am and all you can do is pace a small room.

There is no doubt the jet lag recovery was way behind schedule when the squad were allowed to mingle in small groups after three days of quarantine.

Those were very strictly controlled periods and despite the relief of being able to leave the confines of a room for a few hours, it was far from optimal for preparation for a world-class sporting event against the best team in the world. And even between days four and 10, the squad were in their rooms for 20 hours a day.

No excuses from Proteas

The Proteas won’t dare use it as an excuse. Many view them as robots, who will simply perform on cue despite the circumstances preceding the performance. If they don’t, the coach is rubbish, the players are all rubbish. The same people who were good enough to beat India are now all rubbish at their jobs.

Make no mistake, they were rubbish in the first Test. But it’s worth trying to explore why that was the case, and not simply state the obvious.

“It’s something that I’m still trying to wrap my head around and hopefully in the next day or two, I can process it and give an answer,” said Elgar after the Test. He wasn’t about to make excuses, probably assuming the reasons were reasonably self-evident.

“I do feel that our intensity was lacking throughout the last two-and-a-bit days. We know as a side that when our intensity is high and we’re operating at a certain level, we compete and give ourselves the best chance of victory.

“We were totally outplayed by a classy New Zealand outfit in all three departments.”

Did the Proteas make mistakes in selection? Probably. In-form batter Ryan Rickelton should have been given a chance to make his debut, while the late injury to fast bowler Lungi Ngidi was an unexpected curve ball.

With two debutants in the team in Glenton Stuurman, in for Ngidi, and opener Sarel Erwee, putting in a third (Rickelton) would have been a huge risk. As it was, Stuurman and Erwee endured torrid debuts.

With the benefit of hindsight, playing Rickelton was probably a risk worth taking, but considering the impossible build-up, some experience was needed. Which is why the recalled Zubayr Hamza and the out-of-form Aiden Markram were preferred to Rickelton.

On equal footing, New Zealand would have started the series as clear favourites given their status as world champions in the format and home ground advantage.

The lead-up to the first Test made that slight advantage a massive one, and a team as good as the Black Caps was never going to be anything but ruthless in putting their boot on the Proteas’ throats.

In a two-match series they have taken such a leap forward that a Proteas victory in the second Test to salvage something from the series would be one of their greatest achievements.

“I am not going to use quarantine as an excuse,” Elgar said after the defeat. “We are here to represent our country and we need to be firing by the time match day comes. If that is an excuse, it’s a very weak excuse to be using.”

Jim Telfer would be proud. DM