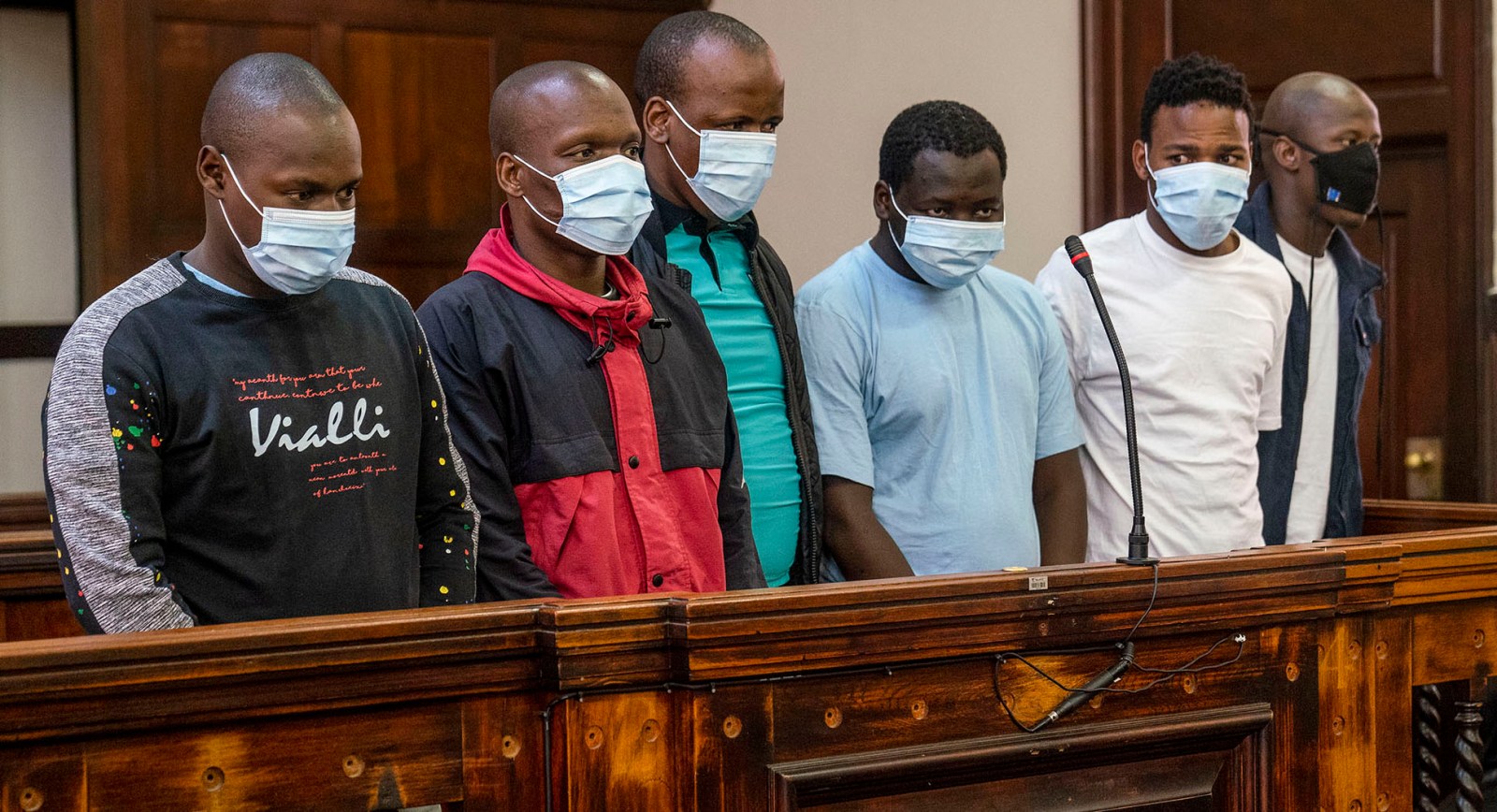 The six men accused of the murder of Babita Deokaran in the dock at the Johannesburg Magistrates’ Court on 19 November 2021. (Photo: Shiraaz Mohamed)

The six men accused of murdering Gauteng health department official Babita Deokaran will not appeal a magistrate’s decision to deny them bail.

According to the charge sheet, the six men orchestrated a meticulous plan to kill Deokaran, the Gauteng health department’s acting chief financial officer, outside her Winchester Hills, Johannesburg, home on 23 August 2021.

At the time of her death, Deokaran was investigating fraudulent Covid-19 contracts with the Gauteng health department. Her evidence formed part of the Special Investigating Unit’s probe into this tender scandal. Read more here.

The six accused face charges of premeditated murder, attempted murder and the illegal possession of a firearm and ammunition.

Shafique Sarlie, acting for the accused, said: “On Thursday, the six accused briefly appeared in the Johannesburg Magistrates’ Court. The State indicated they are in the process of finalising the investigation and an indictment would be available at their next appearance. At this stage, I’ve advised my clients that we will not appeal the decision to refuse their bail.”

Sarlie said it was important that the matter goes to the high court as that is the appropriate platform for a ruling on the admissibility of Phakamani Hadebe’s confession.

The accused’s confession is a matter of some contention in this case and names former health minister Zweli Mkhize and his brother as having ordered the hit on Deokaran. This allegation has been denied by Mkhize. Hadebe subsequently said the allegation was untrue.

In his confession, made on 27 August 2021, Hadebe claimed that on 16 August 2021, he was telephoned by Zitha Radebe, who told him to go to Pretoria to meet certain people.

He said he and Radebe, along with Sanele Mbhele, drove to the Brits Mall in a Volkswagen Polo. It was here that he learnt about the plot to kill Deokaran.

“They got into a Black Mercedes-Benz Viano. Inside were four males. Dladla introduced two unknown males to me as the minister [Mkhize] and his brother.

However, in Hadebe’s affidavit in support of his bail application, he said the confession had been made under duress. He claimed to have been assaulted by police.

His affidavit reads: “I falsely confirmed the involvement of Mr Zweli Mkhize and that of his brother. The disclosure in the confession that we met Mr Mkhize and his brother in the Brits Mall was a complete figment of my imagination.”

During earlier proceedings, prosecutor Steven Rubin told the court that “at this stage, Mr Mkhize is a potential state witness and potential suspect”.

Outstanding issues remain to be finalised, including cellphone records and DNA analysis of a firearm to determine whether the weapon was used to kill Deokaran.

The Hawks previously indicated that more suspects would be arrested, but on Thursday Hawks spokesperson Thandi Mbambo confirmed that no further arrests have been made.

The six accused are back in the Johannesburg Regional Court on Tuesday, 12 April 2022. DM