DM168 AGE OF THE ASSASSIN 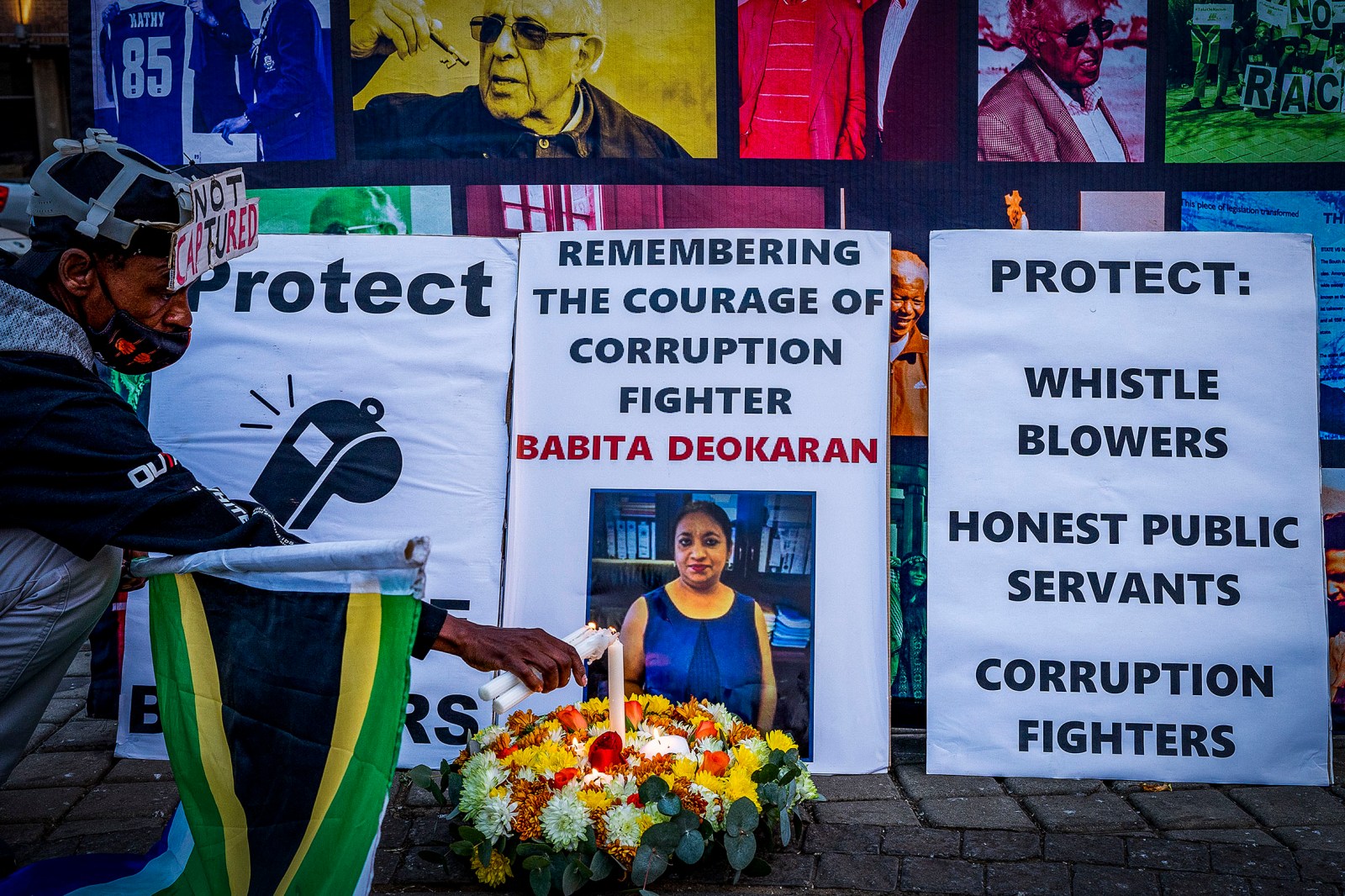 A man lights a candle besides a poster in remembrance of Babita Deokaran. (Photo: Shiraaz Mohamed)

Vital piece of information after assassination of Gauteng Department of Health Acting Chief Financial Officer Babita Deokaran enables investigators to trace a vehicle at the scene to a former South African National Defence Force member residing in the Pretoria area.

Meticulous investigation by a police task team secured the arrest of seven suspects in connection with the murder of Gauteng Department of Health’s (GDoH) acting chief financial officer Babita Deokaran.

A statement issued by National Commissioner of Police General Khehla Sitole on 27 August confirmed the arrest of seven suspects linked to the murder of Deokaran. Police confirmed the suspects will appear in court once they have been formally charged.

The arrest comes four days after the murder of Deokaran on 23 August in front of her house in Winchester Hills, Gauteng.

At 8am she returned home after dropping her child off at school.

As she pulled up in front of her house, an unmarked white BMW pulled up alongside her car and fired several bullets into her vehicle. She died later in hospital.

After the incident, a neighbour alerted police he had seen the same BMW on three occasions in front of Deokaran’s house. The occupants took pictures of the house and the neighbour took photos of the car and jotted down the registration number.

It was this vital piece of information that enabled investigators to trace the vehicle to a former South African National Defence Force member residing in the Pretoria area.

At the time of her untimely death Deokaran was investigating fraudulent Covid-19 contracts at the GDoH. Her evidence and investigation affidavit was part of the Special Investigating Unit (SIU) investigation into this tender scandal.

A colleague of Deokaran’s, who asked not to be named, said Deokaran had worked with the SIU way before Covid-19 and corruption around the department’s personal protective equipment tenders, suggesting that she had been exposing people and illegal acts in the Department of Health for at least the past decade.

According to the colleague, as the financial officer, Deokaran was the “smoking gun” that would have the paper trail to sink top-level officials. Deokaran’s decision to clean house would also have shown the web of corruption that requires “a syndicate” to push through paperwork for approval at various stages of processing and to install the pliable people within the department who can be pressured or cut in on deals.

Her affidavit is the crucial piece of evidence that gave investigators a detailed summary of all those involved in the Covid-19 fraud and their financial accounts. This affidavit was handed to the Hawks and with the evidence gathered by Gauteng investigators at the Murder and Robbery Unit, police were able to trace the suspects.

In the early hours of 27 August, members of SAPS Gauteng Serious and Violent Crimes, Johannesburg East Crime Intelligence, Fidelity Specialised Services and Community Active Protection followed up information received about the whereabouts of the suspects in Deokaran’s murder in Johannesburg.

During the arrests police confiscated two firearms and two vehicles. The investigation has been referred to the Directorate for Priority Crime Investigation (the Hawks) for further investigation, as Deokaran’s murder shows all the signs of a planned hit by a criminal syndicate.

The next step in the investigation is for the Hawks to arrest syndicate members and establish exactly who ordered the hit on Deokaran.

The assassination of individuals is an underworld trademark. Eric Pelser, a senior researcher at the Institute for Security Studies, said: “The murder of Deokaran shows there is no distinction between the criminal organised network in the underworld and that embedded in state departments.

“It is a criminal [ecosystem] and their modus operandi are the same. The purpose is to extract maximum profit through illicit dealings, price escalation and extortion. Tender processes in state departments are hijacked by the [ecosystem].”

The operation of this criminal ecosystem, he explains, includes corrupt officials who, for example, infiltrate the tender process, committing fraud and making sure the preferred bidder gets the tender.

For this role the official gets a kickback, he added, and everyone in that criminal chain gets compensated.

“If a disruption in the [ecosystem], which impedes … their ability to pay off those in the system, is detected the network will introduce measures to get rid of the threat. In this case it appears as though Deokaran was a whistle-blower,” Pelser said.

Chad Thomas, a registered private investigator and director of IRS Forensic Investigations, said he had seen an increase in criminal syndicates using mobile phone-based technology to track their victims and signal-jamming technology to cloak or hide their activities.

“We may well see sophisticated organised-crime syndicates hijacking CCTV systems just prior to a cash heist or bank robbery, or hijacking satellite-tracking devices to ascertain the whereabouts of victims in the very near future,” he added.

Vigil for a slain whistle-blower

It was a memorial vigil on Mary Fitzgerald Square in Johannesburg, but each candle lit for Babita Deokaran on the night of Thursday, 26 August also burnt with palpable rage that the whistle-blower’s life ended in a hail of bullets while corrupt personal protective equipment (PPE) looters she intended testifying against still walk free.

The candlelight vigil was attended by representatives from civil society and activists from the Ahmed Kathrada Foundation, Defend Our Democracy and Outa. Speakers slammed Premier David Makhura, who was present, for failing to run a clean ship, allowing rot to take hold in the province, including in the Department of Health; his failure to be transparent and accountable; and for falling back on lip service, hollow promises, politicking and even crocodile tears.

“Babita’s death is a stain on your credibility and the legacy of this province,” said Kavisha Pillay of Corruption Watch.

Pillay said that, in the past few years, Makhura’s premiership had been marked by a “reversal of transparency”. Makhura’s office has repeatedly been under fire for being uncommunicative and unresponsive when called to do its job by answering questions or making information available to journalists and civil society organisations.

Pillay said afterwards that unrelenting violence, intimidation and harassment of whistle-blowers continues because there is no political will to protect them. She added that protection had to include sound legal advice, financial support and mental health support.

“These are people who expose leadership at the highest levels, so it’s not in political leaders’ interest to protect them, especially not in a captured, corrupt state.”

Makhura, in his address at the vigil, acknowledged the anger he said he felt at Mary Fitzgerald Square and called it “justifiable”.

The premier confirmed that the delayed lifestyle audits of MECs and of himself were being finalised and he said that all officials who worked with supply chains to approve tenders and procurement deals were being vetted in a new framework for audits being set up in Gauteng.

“Until people are arrested and serve a jail term for corrupt activities, all the things I’m saying here mean nothing. Until the killers of Babita and those who sent the killer – and I am convinced the person who pulled the trigger is not the only source of this killing – are arrested, what I say means nothing.

“Until I take concrete steps to bring the looters and the corrupted to book, you are right to say that all politicians are rotten,” he concluded. DM168