Inside the small West Coast fishing town where Friday n... 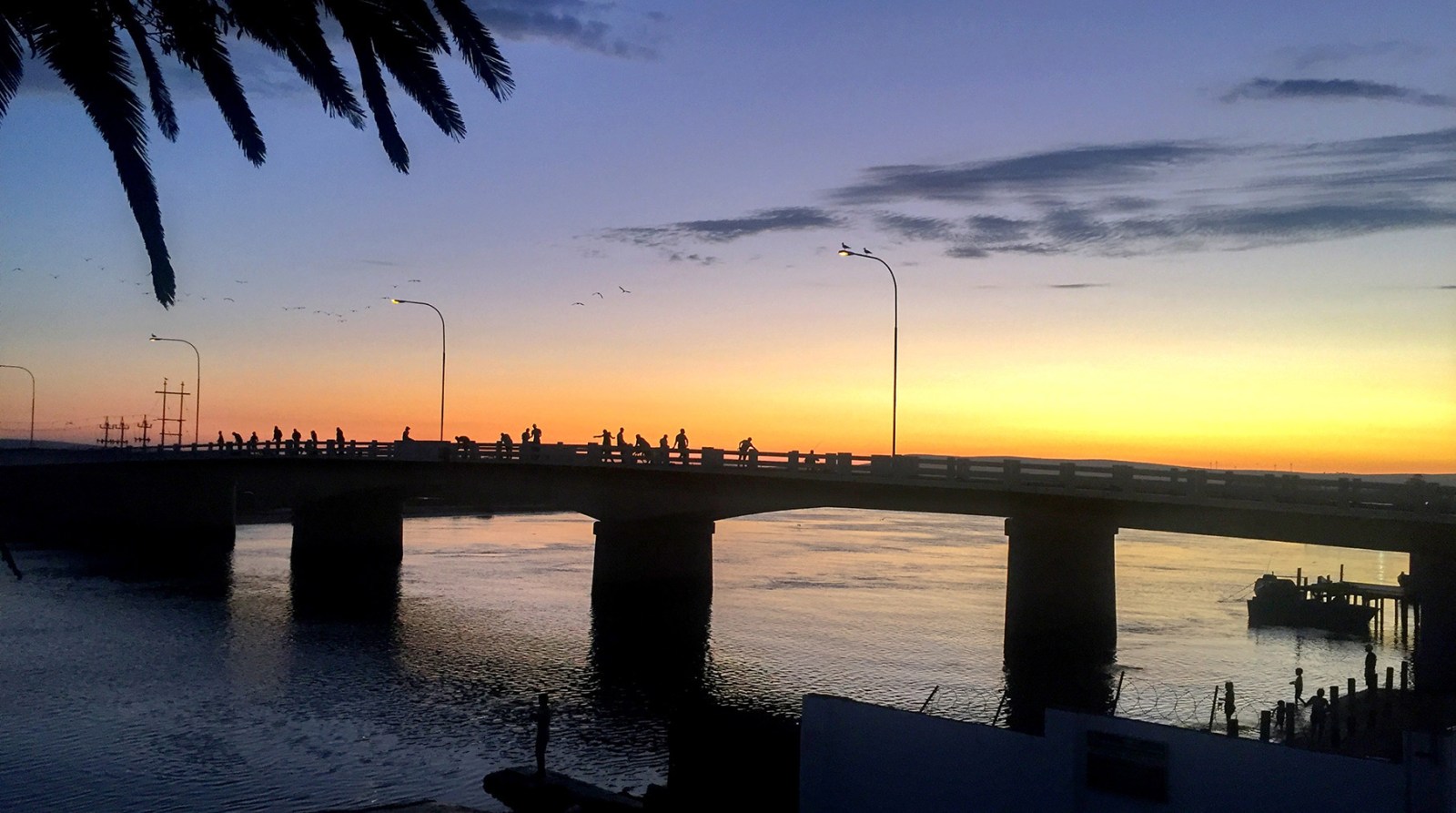 On the evening of Monday 14 February, families enjoyed the breeze on the Berg River in Velddrif on the Western Cape West Coast. Fishing is one of the area’s biggest attractions. Fishing is also a big employer in the town — it hosts several restaurants and takeaway spots that specialise in fish. It is also popular for its speciality called bokkoms — a salted and sundried small harder or mullet. (Photo: Joyrene Kramer)

The salted, dried fish known as bokkoms remains a popular snack in the fishing community of the West Coast town of Velddrif, but times are changing. The town’s picturesque harbour and well-preserved buildings have become its hallmarks.

Bokkoms are essentially mullet that are salted and left to dry in the sun. Sometimes referred to as “fish biltong”, it’s one of the main delicacies in Velddrif, a fishing town 156km from Cape Town straddling the banks of the Berg River.

The name Velddrif came into existence after a farmer, Theuns Smith, brought his cattle to graze on the far side of the river and needed to pass through a “drift” in the veld. The town was formally recognised in 1946 and was declared a municipality in 1960.

Western Cape Premier Alan Winde recently delivered his 2022 State of the Province Address in the town, which is known for its hospitality — but it continues to face service delivery challenges.

The health benefits of bokkoms, according to Felicity Stroefveld, curator at the SA Fisheries Museum in Velddrif, were recognised as far back as the 1400s. Recalling the history of the town, she said that farmworkers sweated a lot while working out in the hot sun, and were given salty bokkoms by the farm owners to replenish the lost nutrients.

Turning off the main road into Velddrif, there’s a permanent stand offering bokkoms for sale.

Retired fisherman Dirkie Smith (75) told Daily Maverick: “I still remember the good old days on Friday nights at the tavern. There was nothing better after a hard day of work than enjoying bokkoms with a glass of Lieberstein. Today we still enjoy it with a glass of brandy.”

Stroefveld said that fishermen had informally named a road along a bank of the Berg River as Bokkom Laan. Of the 20 or so houses that were once strung out along Bokkom Laan, and whose occupants would catch and process the fish, only four remained in operation.

“Bokkom Laan is now a place where you have art galleries and coffee shops,” Stroefveld said.

Stroefveld said the bokkom and wider fishing industry was booming a few decades ago, but that it had become increasingly difficult for fishers to negotiate rights and quotas.

Velddrif’s main industries are fishing, tourism and salt production. There are two large salt works in the town that provide salt to most of the Western Cape.

Giving an overview of the history of Velddrif and the people who played a role in developing the town, Stroefveld said: “The building which houses the museum was built by Johan Carel Stephan, dating back to the 1800s.”

A member of the well-known Stephan family from St Helena Bay, he built something of an empire in Laaiplek near the mouth of the Berg River, establishing a trading route to transport grain from farmers inland via the Berg River to Cape Town.

According to Stroefveld, Stephan also did business with Italian immigrants who still have family in Velddrif and Laaiplek. He built offices which later became the Laaiplek Hotel, which is still standing today.

Another more recent family that left an indelible mark on the area was that of Johnnie Eigelaar. In 1961, the family started producing Bokkoms Biltong which is still being sold around the province and can be found in many fish shops.

In 1978, they bought the Laaiplek and Riviera hotels, which have become landmarks among the fishing community. The Eigelaars also built a post office in the area in 1993.

The Berg River, explained Stroefveldt, was an important food source for the Dutch Cape Colony in the 1700s. At the time there were no jetties and fishermen got permission from farmers to catch fish and store their equipment on a sandy stretch along the river.

Stroefveldt said that fishermen were no longer allowed to fish in the river and that the estuary had been declared a Ramsar site under the Convention on Wetlands of International Importance.

The declaration came in the wake of World Wetlands Day on 2 February 2022. At the time, CapeNature CEO Dr Razeena Omar said that conservation of the ecosystems and species was dependent on the balance between freshwater and seawater entering the estuary.

He said this balance had been maintained and it was for this reason the site had been recognised for its exceptional value in terms of ecosystem and species diversity.

It’s not only bokkoms that are synonymous with Velddrif. The annual Berg River Canoe Marathon is a popular event that starts in Paarl and ends at the Carinus Bridge in Velddrif. The first race was held in 1962 and has gained a reputation as being one of the toughest courses in the world.

The history of the Griqua (Griekwas) who lived in Velddrif in the 1400s cannot be overlooked, said Aroon Messelaar, high commissioner of the Griqua Royal House.

“Velddrif was part of Saldanha where the Saldanhabaaiers lived in the 1400s. History shows that these people only became aware in the 1700s that they were part of the Griqua tribe.

“We live in the 20th century and it’s time that the history of Velddrif and the role the Griqua tribe played is written,” Messelaar said.

Henry Charles, former director of the Research Institute at the University of Western Cape, underlined that the omission of Khoisan history is something that needed to be remedied. DM/MC