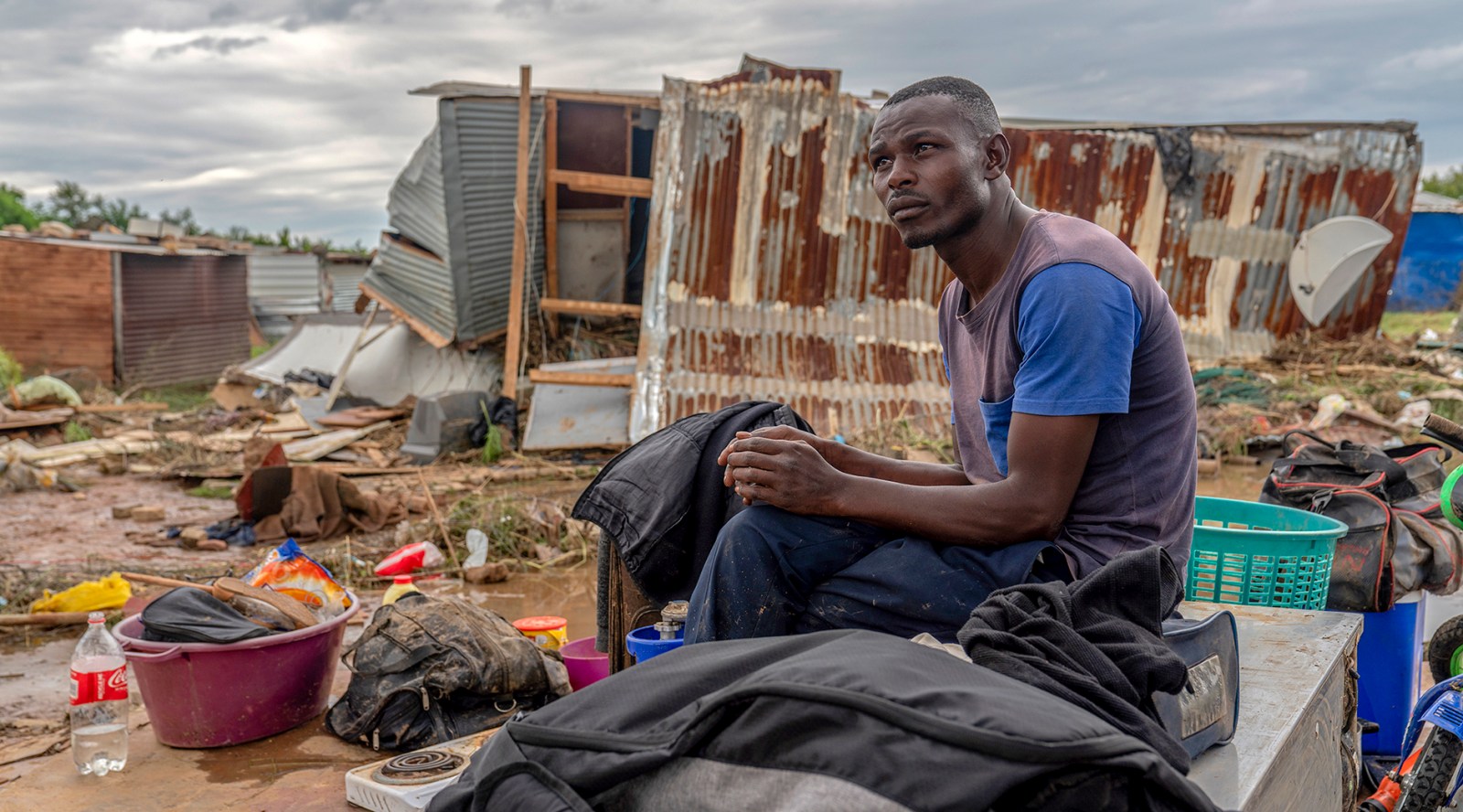 A man sits with his remaining belongings following a heavy rainfall in Willow Farm, Mamelodi, Tshwane on 5 February 2022. The flash floods caused many people to be displaced. (Photo: Shiraaz Mohamed)

While some residents of Eerste Fabrieke informal settlement have been moved to ‘overcrowded’ temporary accommodation other community members have insisted on staying at the disaster site until the City puts a concrete plan in action. Meanwhile, the family of Lucas Mahlaba, who died in the weekend floods, are battling to find funds for his burial.

Heavy rains that flooded the shacks of informal settlement residents in Mamelodi near the Eerstefabrieke railway station over the weekend have left a trail of mayhem. This is the second time since 2019 that severe flooding has forced Eerstefabrieke shack dwellers to seek refuge at temporary shelters. Although there were no casualties in the 2019 flood, this time one resident from the area, Lucas Mahlaba has died.

City of Tshwane MMC for Human Settlements Abel Tau released a statement on 8 February 2022, wherein he committed his department to finding a lasting solution to the plight of the Mamelodi flood victims. Tau said that once suitable land had been acquired and properly prepared for allocation by the City, then all flood victims will be relocated to safer settlements. Tau said flood victims were being relocated to community halls and shelters in the interim.

“Following my oversight visits to flood-hit areas, I have decided to meet with leaders of these communities next week Tuesday to discuss the situation and map the way forward,” he said.

While flood victims expected an urgent, special sitting of the Council to be convened to deal with the issue of the floods and their relocation to safe permanent homes, Tau announced that the matter will be dealt with through ordinary sittings of the Council. When asked whether a special budget for the relocation of the flood victims will be tabled as a matter of urgency, Tau said: “The budget of the Council is only tabled in the June Ordinary Council meeting and comes into effect from July. This is in terms of existing legislation.”

However, displaced some displaced shack dwellers are sceptical. Section 77 resident Malose Sikala told Daily Maverick that he and other community members are refusing to be moved to temporary shelters. They have vowed to remain at the disaster site and rebuild the damaged shacks. “We want permanent stands now. Not empty promises,” exclaimed Sikala.

Meanwhile, flood victims from other areas of the informal settlement who had agreed to be moved to alternative places of safety around Mamelodi this past weekend have already raised grievances about their temporary living conditions.

According to flood victim George Sedibe, who was relocated to Nellmapius library hall, living conditions there are diabolical.

“About a thousand of us live here and there are not enough toilets. Men, women and children have to sleep in one overcrowded room. There is no privacy here,” he fumed.

“We don’t eat enough. And there is only two toilets for men and three for women. We are compelled to go out and relieve ourselves in the toilets of the nearby RDP houses or in the bush when nature calls,” said a relocated resident who refused to be named.

December Matlala, the leader of the flood victims who were relocated to Nellmapius library, appealed to the City of Tshwane to send Home Affairs officials to their shelter so that they can apply for new documents lost to the floods, ranging from IDs and birth certificates to passports.

“Our documents were swept away by the rampant floods and we can’t access things like banking facilities. Women who want to apply for child support grants are at a disadvantage because Sassa (South African Social Security Agency) won’t process their applications without IDs,” he said.

In response to the aforesaid complaints, Tau said he and his department did their best relocating flood victims to the various shelters given the prevailing difficult circumstances.

“The issue of lack of enough food, toilets, overcrowding and application for new documents from Home Affairs rests with the Department of Social Development in the City of Tshwane, not my department,” he explained.

MMC for Social Development Peggy De Bruin promised to escalate the said complaints to her superiors and announced that the Home Affairs office in Mamelodi has already been alerted to the need expressed by relocated residents to apply for new documents.

Picking up the pieces

Elsewhere, the family of Lucas Mahlaba, who died in the weekend floods, have said they can’t afford to bury him. Mahlaba’s sister Maggie, has appealed to the community of Mamelodi and the City of Tshwane to help her family with funds to bury her 31-year-old brother, who was swept away by the floods which hit the Eerstefabrieke settlement area in the early hours of Saturday morning. Lucas was originally from Rathoke village in Limpopo.

“My brother Lucas was not formally employed but lived from hand to mouth with a pittance that he earned from odd jobs. He didn’t have a life insurance policy,” Maggie told Daily Maverick.

She said given the fact that the family can’t afford to bury her brother in Mamelodi, members of the family are compounding matters by insisting that Lucas’s body be transported to Limpopo for burial — a cost the family simply cannot afford.

De Bruin said the metro has an “indigent programme” that provides impoverished families with financial assistance to bury their loved ones.

“But our indigent programme is operational only in the City of Tshwane. Since the deceased is going to be buried outside Tshwane it will be impossible for the Metro to help in this regard,” De Bruin said.

Her sentiments were echoed by Ward 28 Councillor Joyce Seelane, who said since the burial site is outside the jurisdiction of the City of Tshwane, the indigent programme won’t cater for such a funeral. DM