Fixing the JSC, making it serve SA’s people and not the politicians? Maybe start with baby steps 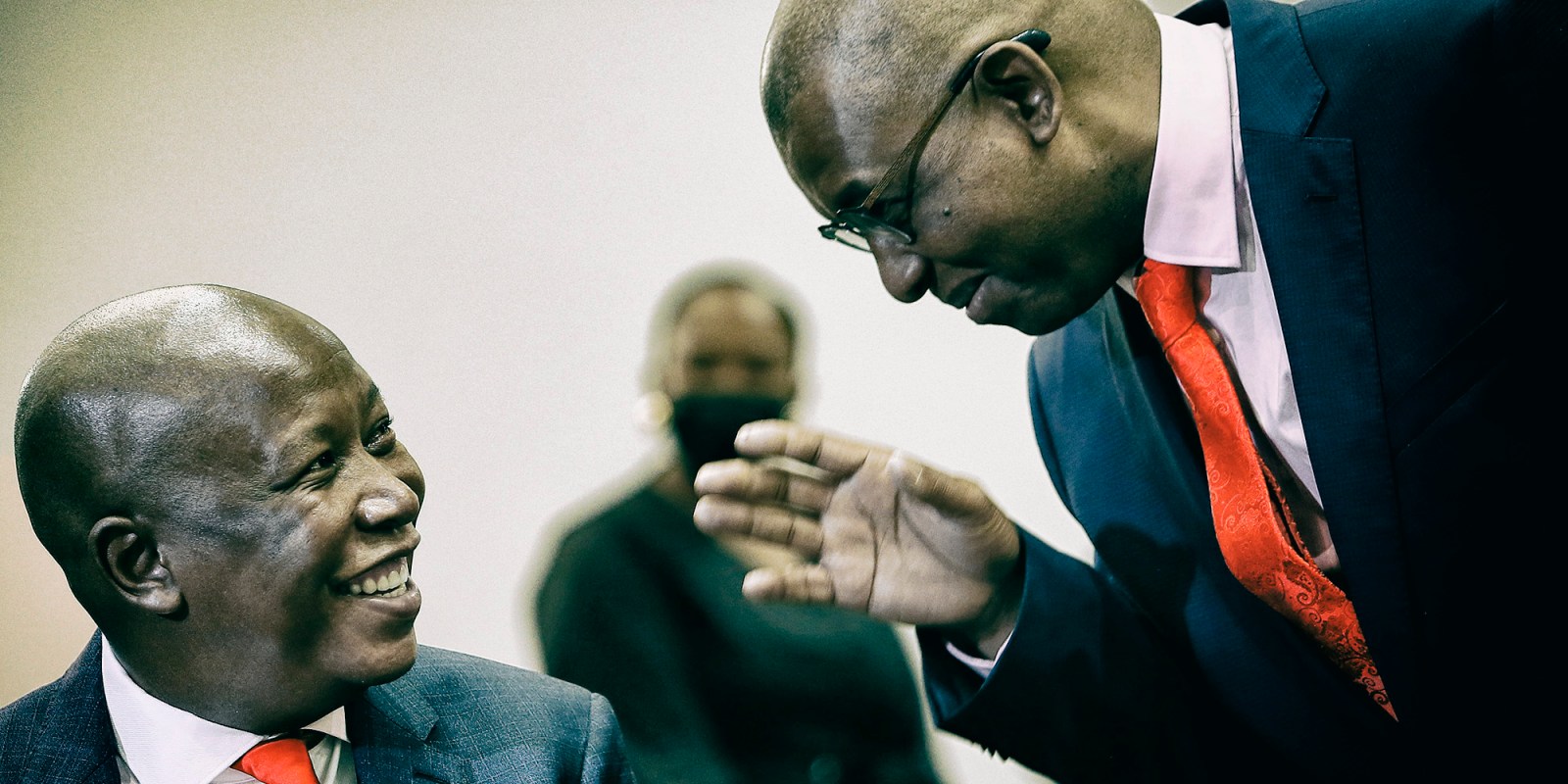 EFF leader Julius Malema and Advocate Dali Mpofu on Day 04 of the interviews for South Africa’s next Chief Justice at Park Hotel in Johannesburg, South Africa on February 04, 2022 in Sandton. (Photo:Felix Dlangamandla/Daily Maverick)

The calls for big changes to the Judicial Service Commission are well-founded and well-intentioned. But it may be that smaller, less-dramatic changes could have a big impact, without the contestation that bigger changes would cause.

After last week’s hearings of the Judicial Service Commission (JSC), there are again calls for it to be reformed, for there to be drastic changes. Many constituencies appear to be frustrated with how it conducts itself and to some extent the outcomes of its processes.

But the key to any change may be whether or not it needs to change its structure, or just the personnel on it. Also, while it may be tempting to remove the politicians from the body, that would also make it less democratic. It should be remembered that there is much that does work in the current system, particularly its transparency.

Last week’s JSC interviews first descended into the tragedy of two commissioners shouting at each other, and then the farce of the chairperson reading out a letter of complaint against the commission, without realising the public was still watching on TV.

While there is a rich smorgasbord of low points, just for sheer embarrassment, Friday evening must rank among the worst of the week.

Unfortunately, this was just the latest in a series of JSC moments when it transformed itself into a theatre of the absurd. In 2021, it had to agree to rerun its interviews, as it had failed to conduct itself properly. Everyone on the JSC, and outside the body, knew that was the case.

It is not surprising that this deliberate mess prompted calls for reform.

Before any kind of examination can be made, it is important to remember that it would be foolish to think that anybody with a variety of constituencies will be immune from the very visible tensions within our society. Why should the JSC be any different from Parliament, the City of Joburg’s council chamber or even our national men’s cricket team?

But it may first be important to determine what works at, and for, the JSC and what does not.

It can be said with confidence that one of the strengths of the current arrangement is its transparency. While there may be much criticism of what happened, at least everyone saw it. And that means that the public is enabled to have an understanding of how, and why, certain people were recommended, even if they don’t agree with the questioning or the outcome.

However, only the interviews are in public. The actual deliberations of the JSC are behind closed doors. Under the law, the body has to vote. But as one of the JSC spokespersons, advocate Dali Mpofu, explained on SAfm on Monday morning, only the result of the vote and not the vote count itself can be made public.

This may be problematic: it is known that former Chief Justice Mogoeng Mogoeng had a shortlist of judges to appoint before the JSC sat in 2021 (those judges were appointed).

Another issue, that the JSC as a consultative body can be overruled by the President, was probably included as a mechanism to deal with mistakes by the JSC. The problem, of course, is that it is entirely possible for a president to overrule a perfectly good candidate for his or her own political reasons.

This should perhaps be debated.

Any proposal to make any alterations should ensure that the current transparency is retained and perhaps also extended to the deliberations.

Granted, the last point could lead to even more grandstanding than we see at present.

The structure of the JSC is spelt out in detail in the Constitution. It must include the Chief Justice (the chair), the President of the Supreme Court of Appeal, a Judge President, the justice minister, two advocates, two attorneys, one legal academic, six members of the National Assembly, four members of the National Council of Provinces, four people nominated by the President and then, if deciding matters on a particular court, the head of that court’s division.

This means that there are currently 10 MPs, one minister and four extra people appointed by the President. This invariably results in many politicians being on the body.

It may indeed be tempting to say that all of the politicians should be removed, and there are many logical reasons for that. But this would also remove democratically elected people from the process. While this move is certainly tempting, it is surely undemocratic.

It would also be wrong to say that we should let just the legal sorority/fraternity decide this – that would allow judges and lawyers to perpetuate themselves and their ideologies.

This is why the hybrid system is important, and the inclusion of legal academics is also valuable.

Some may suggest that the balance should be changed, that the number of politicians should be reduced. But this too can be contentious, because the voice of opposition parties should be retained. If they are not, then the voice of the governing party would be much too loud, particularly as it would have MPs, a minister and the President’s four appointments.

It may be possible to reduce the number of politicians marginally. However, one single change could make a big difference. It can be strongly argued that no one who is facing a criminal charge which has to be decided by judges can be a member of the JSC.

This seems an obvious measure. It would surely be hard to argue against and would remove the possibility that someone who would come before a judge could have a hand in choosing that very same judge.

Another suggestion is to put in writing a set of conditions under which commissioners take part. For example, they could have to promise, under oath (through signing a document) that they will follow a code of conduct. While it may simply lead to more arguments, it could also provide a publicly available set of guidelines that the public will be aware of, and they would be able to judge for themselves when JSC members break those guidelines.

Over the past few days there has been much debate about the lack of clear criteria for the JSC to follow in making its decisions. Some suggest that more detailed criteria could lead to better discussions and better outcomes.

But this is not necessarily the case. It is an unfortunate objective fact that the person with the greatest number of degrees to become finance minister of democratic South Africa was Des van Rooyen. It is entirely possible that a candidate is the best qualified on paper but is still the wrong person for the job.

This means that the argument that some of the clearer criteria for judicial appointments would solve all the problems we’re facing could be misguided.

While there is much talk at the moment about reforming or changing the JSC, making any big changes may be almost impossible. It would require a change to the Constitution and could be highly contentious. It is still possible that as long as politicians are on the commission, and have such media attention upon them, they will use the opportunity to benefit personally to the very best of their ability (so help them God).

However, it may be easier to make smaller changes in the short term. A code of conduct for commissioners and a regulation ensuring that no one facing criminal charges takes part in the interviews could be introduced relatively easily.

These changes could be assessed and that would provide an opportunity to see if any of the bigger, more dramatic changes are needed.

We are now also bound to see a new chair of the JSC when a new Chief Justice is appointed. This could well lead to some changes simply in the way the sessions are handled and thus how some commissioners behave. DM