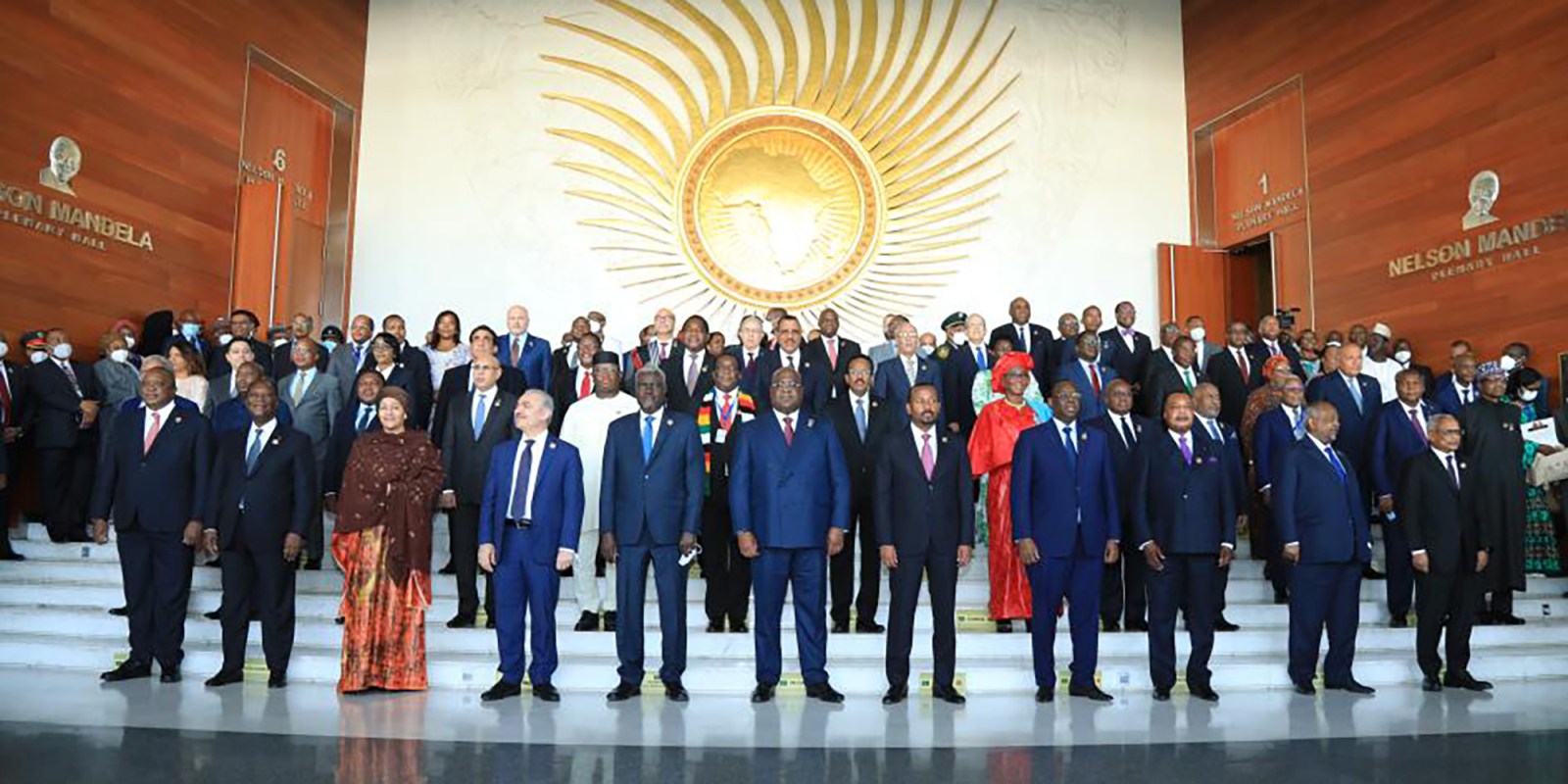 Africa has in the past year faced conflicts and a related upsurge in coups — but the continent’s leaders spent most of their energy at this year’s African Union summit debating something ‘which isn’t even an internal issue’, according to Senegal’s President Macky Sall, who is chairing the continental body this year.

Macky Sall, Senegalese president and African Union (AU) chair, in a press conference after the close of the AU summit in Ethiopia’s capital, Addis Ababa, on Sunday night, played down the prominence that the battle by member states over the accreditation of Israel by AU Commission chairperson Moussa Faki Mahamat at the summit – but it came up at least twice during this weekend’s assembly of heads of state and government, and also last week, during the summit of foreign ministers.

“You can guess this is an issue that divides the continent because countries have their different positions, and we have considered that Africa should not be divided by something even which is foreign to Africa,” Sall said in response to a question by SABC journalist Coletta Wanjohi.

Mahamat in July last year granted AU accreditation to Israel, but South Africa and several other countries have argued that Mahamat needed to have consulted member states before making such a decision, because of Israel’s illegal occupation of Palestine.

Minister of International Relations and Cooperation Naledi Pandor has previously said that the bombardments by Israel and the illegal settlement of Palestinian land “offend the letter and spirit of the Charter of the African Union. The AU embodies the aspirations of all Africans and reflects their confidence that it can lead the continent through the practical expression of the goals of the Charter, especially on issues relating to self-determination and decolonisation.”

Sunday’s debate was only tempered by the desire of the heads of state and their representatives to watch the Africa Cup of Nations final that was due to kick off about two hours after the sitting eventually ended.

Sall had a special interest in the football match as Senegal were to play Egypt. He earlier resisted a temptation to wrap up the summit by noon so that he could honour an invitation to go to Cameroon’s capital, Yaoundé, to attend the match in person.

On Sunday morning it was decided that the debate – which proved to be paralysing and divisive – would be suspended and an ad hoc committee would be set up to consider Mahamat’s decision to grant Israel accreditation.

The committee consists of the heads of state of South Africa, Algeria and Nigeria – all opposed to Israel’s accreditation – and Rwanda, the Democratic Republic of the Congo and Cameroon, all pro-Israel. Sall, who is also pro-Israel, is to coordinate the committee.

As the meeting broke for lunch, it became clear that there was confusion over whether the suspension of the debate also extended to the suspension of Mahamat’s decision – which would, in turn, suspend Israel’s membership.

Pandor told Daily Maverick in an interview over lunchtime that Mahamat’s decision to grant Israel accreditation just over six months ago “is suspended and it will not be implemented, which we think was very important”.

South Africa and Algeria have been leading the charge against Israel’s accreditation.

But a member of the anti-Israel group afterwards claimed that Israel used lunchtime to lobby member states in its favour, and that was why the confusion arose that set in motion another debate.

He argued in favour of the suspension of Mahamat’s decision – and Israel’s accreditation – saying that it should be the same as when an appeal has been lodged in court which suspends the earlier decision of the court.

From the arguments made during the debate, the floor appeared to have been divided almost along the middle in favour of and against Israel.

The debate reverted to the substance of the issue, and when it became clear that there would not be a resolution, Ramaphosa said Sall, as chairperson, should be entrusted with exercising his discretion on this matter.

Ramaphosa, incidentally, paid a working visit to Senegal at the beginning of December and lobbied this matter with Sall at the time.

Although the pro-Israel lobby appeared to have won the final round on Sunday, the anti-Israel lobby still had a “nuclear option” available, an AU watcher said.

Nigeria, Algeria and South Africa are heavyweights, also in terms of financing the AU.

“If, for example, they say this is so serious a matter for us that it puts into question our conviction of the AU, and if they decide to put on hold or suspend payment of their dues to the AU, that could cause complete paralysis. This would be a big deal,” said the AU watcher.

“The seriousness of the issue for the AU is not simply about ideological division. It can have some material consequences.”

The AU is likely to deal with this matter at the next heads of state summit in a year’s time, but is likely that the body might try to settle this by consensus rather than vote.

This has been a highly divisive issue in the AU, on par with the readmittance of Morocco as a member in 2017 – which was ultimately put to a vote. (South Africa, incidentally, was opposed to Morocco’s readmittance due to its control over parts of Western Sahara.)

In his remarks in a closed session with heads of state on Sunday, where the matter was to have been decided, Faki explained the four reasons behind his decision to grant Israel member status.

The first was that 44 out of the 55 member states recognise Israel and have diplomatic and trade relations with the country. (South Africa is one of these, although the ANC has been lobbying for these relations to be suspended.)

The second was that “the number of member states that expressly asked for this accreditation” appeared to have been in the majority.

His third reason was the recognition of the two-state solution, which means recognising Israel and Palestine, and also playing “the positive role of mediator”, as Egypt has done.

Faki cited as his fourth motivation the possibility for the AU to play a similar role – something that is only possible if Israel enjoys recognition.

More than 90 other countries are accredited to the AU.

Palestinian Prime Minister Mohammad Shtayyeh at the opening of the summit urged the AU to withdraw Israel’s accreditation. Invoking a recent report by Amnesty International on abuses committed by Israel, he said: “Israel should never be rewarded for its violation and for the apartheid regime it does impose on the Palestinian people.”

He continued: “Your excellencies, I’m sorry to report to you that the situation of the Palestinian people has only grown more precarious. The decision to grant Israel an observer status is a reward that [Tel Aviv] does not deserve, and we call for this decision to be withdrawn.” DM