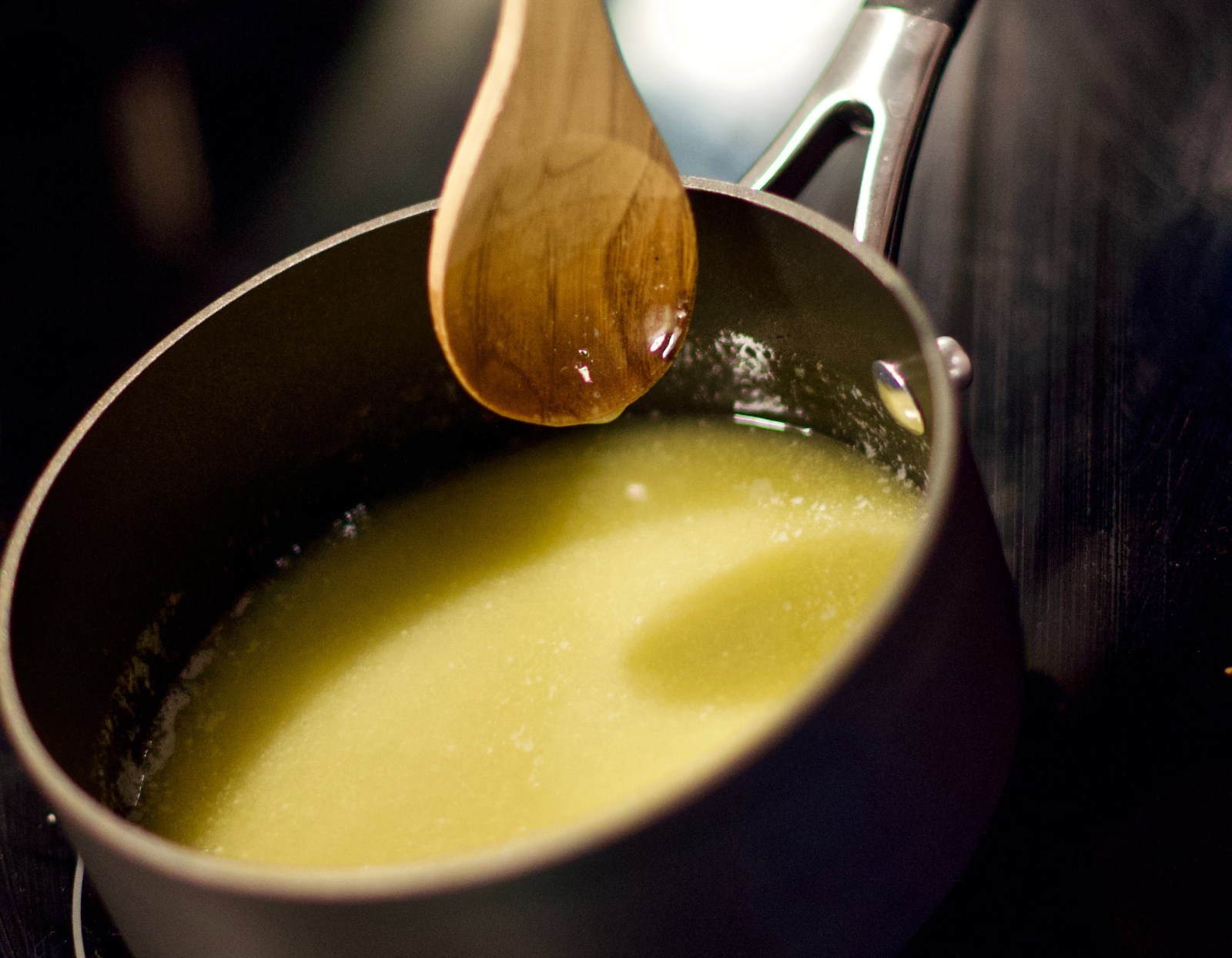 Quite why Miss Muffet sat on her tuffet in the first place, let alone why she then set about eating her curds and whey, has never been satisfactorily explained. Why would a little girl (Do we even know if she was a little girl?) sit down and tuck into butter that had been separated into its liquid and solid components? Did she use a spoon to eat the curds first (that’s the solids part) and then slurp back the whey (that’s the liquid that separates from the fat and milk solids when heat is applied to pure butter). Why would any kid eat curds and whey? Well, we eat cottage cheese, which is similar, and other cheeses such as ricotta, but I’d rather leave my cheese making to a professional and not presume that the solid remnants after clarifying butter will suffice. But Miss Muffet ate both her curds AND her whey…

One of the few things of which we can be sure is that whoever Little Miss Muffet was, she was arachnophobic. Then again, it has also been claimed that she was Mary, Queen of Scots and that the “spider” was her nemesis, so not a spider at all. If the “spider” was indeed the religious reformer John Knox who came along and “frightened” her, as has been (dubiously) claimed, the nursery rhyme would have had to exist before 1572, the year of Knox’s death, yet the earliest known record of the nursery rhyme’s existence dates to 1805. In real, rather than nursery, life, the Prebyterian Church founder and reformer Knox chided Mary for her defence of Catholic practices and went on to call for her execution. No wonder Miss Muffet ran away.

If there is any merit in this far-fetched claim, we need to know how Mary, Queen of Scots found the time to sit down on a hillock and enjoy such a bizarre meal when she had greater matters to attend to.

A couple who have researched such things, Iona and Peter Opie, believe the rhyme to have been around in the 18th century, but are sceptical of yet another claim, says Wikipedia, that Miss Muffet was Patience, daughter of one Dr Thomas Muffet, who died in 1604. Wikipedia wisely avers that “the Opies are sceptical given the 200-year gap”. Well, yes.

More to the point: if you read my intro above, you now know how to clarify butter. Sort of. But what about the difference between clarified butter and ghee? They are, strictly speaking, the same thing. In different ways. And one is superior to the other.

Why clarify? Because butter contains water along with fat and milk solids, and all of us who enjoy cooking things in fat understand that water only gets in the whey. (Sorry.) So, frying something in clarified butter, which is the fatty part without the watery bit, can expect a cleaner finish, as it were. There’s less likelihood of burning, and undoubtedly more likelihood of better flavour.

Clarifying it makes the remaining butter purer, and lends it a nutty flavour and renders it kind of toasty. Bon Appetit magazine called it “the liquid gold we’d drink straight”.

Butter is made up of three things: fat, water, and milk solids. Take one of its key elements away and you have Adapted Level Butter, to use lockdown terminology: clarified butter, or, if you cook it for longer, ghee. Either way, the third element, those milk solids, settles at the bottom of the clarified butter once the curds and whey have separated and you have spooned off the curds. The milk solids will settle at the bottom of the yellow liquid gold, and your next job is to pour the remaining butter off carefully so that the milk solids stay behind and can be discarded.

Ghee, which dates back 5,000 years, is a form of clarified butter but they are not precisely interchangeable, even if generally it matters little whether you use one or the other to fry your eggs or steak in. And, yes, you can do that.

Given a choice, which should we choose, simple clarified butter (in which there may still be water residue as it has cooked for less time), or ghee, for which the longer cooking time turns the milk solids brown, so the remaining fat becomes richer and deeper in flavour and more golden)? The answer must be obvious: ghee wins, all round.

But: I do wonder about some commercial brands labelled “ghee”, as they look suspiciously pale. Are they perhaps merely clarified butter without that extra cooking, which would mean that our products labelled ghee (or some of it) are not the real deal?

The solution, then, is to make your own. Now that we’re having to make our own fish paste (who would have thought both Peck’s and Redro would be discontinued?), what the heck: we might as well teach ourselves to make all sorts of other things now that Corporate Food HQ has decided to cull our lifetime favourites. Will it be tomato sauce next? Mrs HS Ball’s chutney? Don’t think it can’t happen. Have you seen HP sauce on a supermarket shelf lately? Go on, try to find it. And good luck. I make my own chutneys anyway. If you can make jam, you can make chutney. There’s no reason why we can’t have a stab at tomato sauce too. Not sure about HP sauce though, I’ve never seen the point of it.

But for now, get yourself into the habit of clarifying butter yourself, say once a month. Just buy an extra slab of butter, in a tub if possible, so that you have a suitable receptacle for pouring the clarified butter back into and refrigerating.

You don’t need to worry about quantities. Whatever the amount of (unsalted) butter is that you have, put it in a heavy saucepan, put it on a very low heat, and leave it until the butter first melts and then, after a time, starts to separate and frothy bits will appear. The curds will rise to the top, leaving the whey behind, and at the bottom you’ll see the milk solids settling. Once you’ve reached this point you can remove it from the heat, spoon off the curds, and pour the whey into that tub, leaving the milk solids behind to be discarded. Unsalted butter is preferred, but I have clarified salted butter successfully.

Do exactly the same as above, to begin with, but leave it on that low heat until a gentle bubble begins. Leave it longer and the colour will turn from yellow to golden as the caramelisation does its work. After a while the bubble rate will slow and the curds will turn pale brown. Remove it from the heat at this point and watch while the colour continues turning a darker hue and the yellow turns golden. Pour it through a fine strainer or muslin. And that is the key to the pure butter fat that we call ghee: caramelisation, and time. All that’s left to do is to strain it to be sure that the solids can be discarded. DM/TGIFood