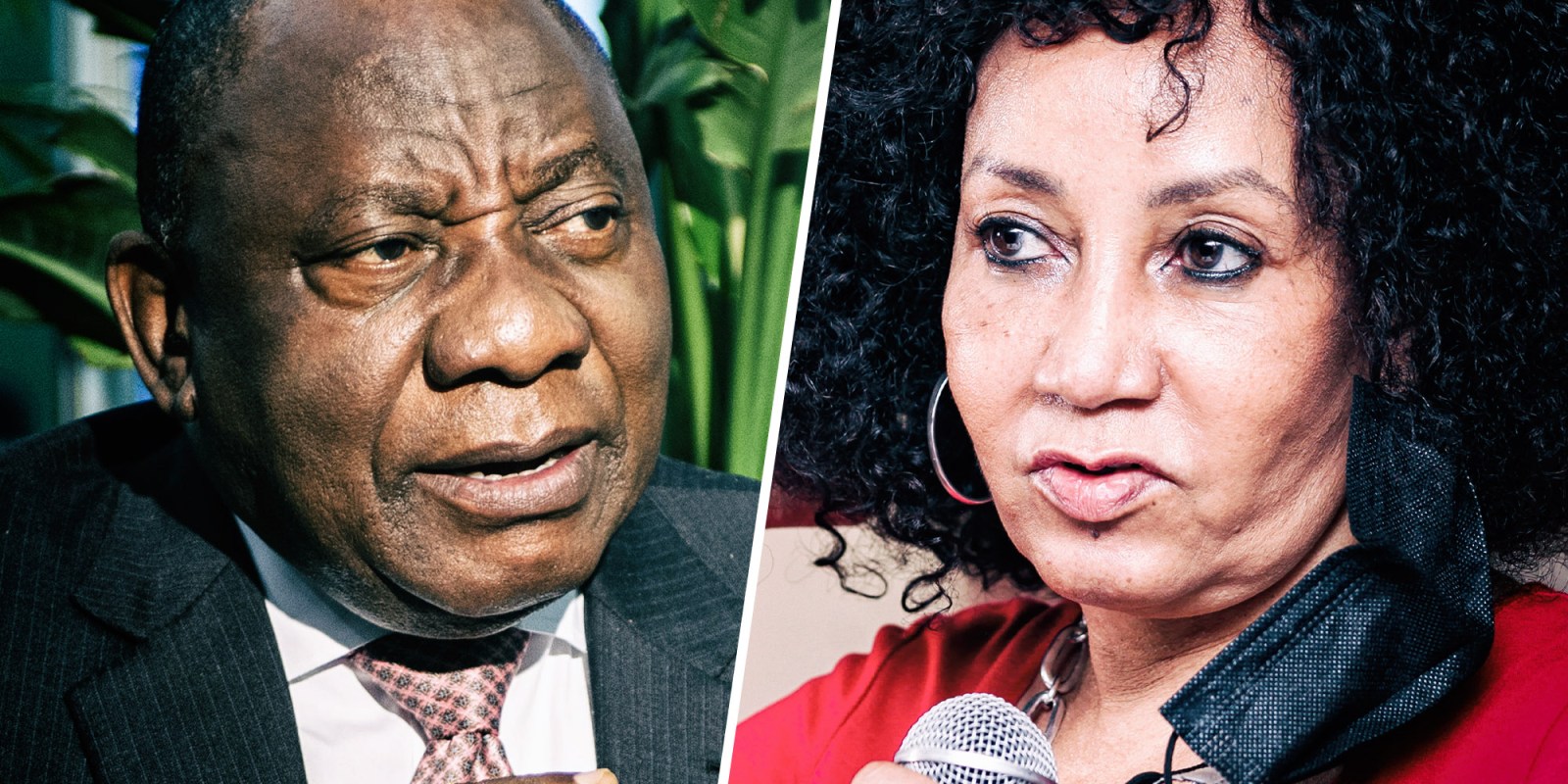 Whatever the short-term cost Minister Lindiwe Sisulu may bear for her attack on the Constitution and the judiciary, she and her supporters can claim what could be an important victory: it appears that they have succeeded in framing the question that will dominate the ANC’s 2022 elective conference.

It is now clear that President Cyril Ramaphosa is facing a threat to his authority from within his own Cabinet. It is indeed extraordinary that a minister has suggested that her own boss is lying. It is clear that the balance of power within the ANC is key to all of this. For the moment, there are strong indications that the National Executive Committee (NEC) does back Ramaphosa.

This development may reveal Tourism Minister Lindiwe Sisulu’s lack of a firm constituency that follows her wherever she goes. It may also show that, broadly speaking, the ANC has no choice but to back the Constitution based on its own Freedom Charter.

However, those who back Sisulu may claim one victory. It seems that for the last few weeks they have been able to frame the question: How will Ramaphosa act to defend the Constitution and the judiciary? This, in itself, may be seen as an important victory through driving the discussion and setting the battlefields to their own liking.

Sisulu’s statement on Thursday evening claiming that Ramaphosa was not telling the truth in the Presidency’s statement alleging that she had retracted her criticism of the judiciary is unprecedented in our politics. On Friday morning, she softened her claims slightly, suggesting that it was the Presidency’s “media team” that was “mischievous”.

While this may be an attempt to save her ministerial job the morning after a wild night, it seems hardly less of an accusation (blaming a spokesperson is an old trick in politics, but the main thrust of the claim remains the same).

There are at least three important incidents in our democratic history that have parallels involving a minister or a deputy minister defying their president in this way.

In 1995, the then president, Nelson Mandela, fired his ex-wife Winnie Madikizela-Mandela, the deputy minister of arts, culture, science and technology, for her repeated public attacks on his government.

In 2007, the then president, Thabo Mbeki, fired Nozizwe Madlala-Routledge, the deputy health minister, after she repeatedly clashed with the then health minister, Manto Tshabalala-Msimang. Publicly it was blamed on her trip outside the country to a health conference, but in reality, it appeared to be over the provision of antiretroviral drugs – Mbeki himself was out of the ANC’s leadership just months later.

In both these cases, the president acted in the face of alleged defiance by a deputy minister.

However, it may also have been the case that Pravin Gordhan was defying the then president, Jacob Zuma, between December 2015 (when he was appointed to replace Des van Rooyen after the sacking of Nhlanhla Nene) and March 2017, when he was fired.

These examples may be useful because they point to the importance of a constituency.

Gordhan was able to survive in the position for so long precisely because he had a constituency, as he represented a growing group of ANC leaders opposing Zuma.

This may have been demonstrated in an incident in Parliament when virtually the entire National Assembly rose to applaud his Budget presentation. Four ANC members, Zuma acolytes Van Rooyen, Lindiwe Zulu, Bathabile Dlamini and David Mahlobo, all stayed in their seats. It was a pointed snub, a sign of where their allegiance lay, but also a sign that things might not work out well for Zuma (they did not).

This shows the importance of having a constituency in the ANC. It is precisely because of this that Zuma was able to defeat Mbeki at the 2007 Polokwane conference.

While much has been said recently about the theory that Sisulu is trying to “play the victim”, and is hoping to be fired to create a backlash against Ramaphosa, this lack of a personal constituency is still the biggest difference between Zuma then and Sisulu now.

More recently, this may also have been demonstrated by the suspension of Ace Magashule as secretary-general.

Despite dark warnings that he would return, he has failed to demonstrate any visible political power since his suspension. There is no evidence that the “victim card” has worked for him. This is because he has not much of a constituency outside the Free State, and outside the Radical Economic Transformation (RET) inner circle.

But there is another question about Sisulu.

So far, it appears she has not spoken about this issue in any broadcast platform, insofar as is known she has not given any interviews in a radio or TV format.

While there is no obligation on her to do this (and it’s important to note that Ramaphosa hasn’t given any interviews on the topic either), her detractors now claim that this clearly shows she is being manipulated, or that the written words attributed to her are not her own.

She is likely to react angrily to this, and there is no clear evidence that she is not in control of her own public comments either. But as long as she refuses to be interviewed or to debate the issues that are apparently so close to her heart, this issue could be used by her detractors.

Over the weekend the Sunday Times and City Press carried what appeared to be informed reporting from the ANC’s NEC meeting.

Cosatu has let it be known that it is furious with Sisulu, and said so in its input to the meeting.

The Sunday Times suggested the NEC was broadly backing Ramaphosa, while City Press suggested that the top six officials had said the NEC could not discuss this as it had to go through other administrative processes first. (It may be important to note that the top six is really now just four national officials – as Magashule is suspended and Deputy Secretary-General Jessie Duarte is unwell).

Sisulu may have backed herself into a corner within the ANC.

If the NEC does not back Ramaphosa, it will be going against the Constitution. This is a document that was largely written by the ANC (despite what those attempting to rewrite history now claim). Certainly, the ANC has often claimed credit for what the Constitution grants to ordinary people.

Were the NEC to now move away from this position, the entire party may find that voters who like what the Constitution gives them will punish the party.

The cost of not defending Ramaphosa in this situation could be devastating in the longer term.

However, there is another important longer-term point.

Whatever the short-term cost Sisulu may bear for her attack on the Constitution and the judiciary, she and her supporters can claim what could be an important victory.

It appears that they have succeeded in framing the question that will dominate the ANC’s 2022 elective conference.

The debate within the ANC at the moment, at the start of a leadership election year, is now about the Constitution and the role of judges. This may play an important role in the setting of the playing field for the debate, and the entire leadership campaign could now be about this particular question. Those contesting for positions may have to answer the question: is the current system working?

This is likely to benefit the RET faction and may well weaken Ramaphosa.

There are many ways this could end.

Ramaphosa could fire Sisulu and the entire issue could fizzle out relatively quickly, such are our political dynamics at the moment.

Or he could fire Sisulu and it turns into a much bigger issue: she would be outside Cabinet, but inside the ANC where she could attempt to build a constituency.

Or Ramaphosa could take some more muted action and the entire issue could be put on the back burner with no real resolution.

Or any combination of these options.

All of these will have some cost. Ramaphosa could fire Sisulu and create some internal risk in the ANC or he could keep her in the Cabinet and the ANC could carry more electoral risk.

But it does appear that there are limited good options, and that someone will have to pay a political cost for the development of this wretched situation. DM