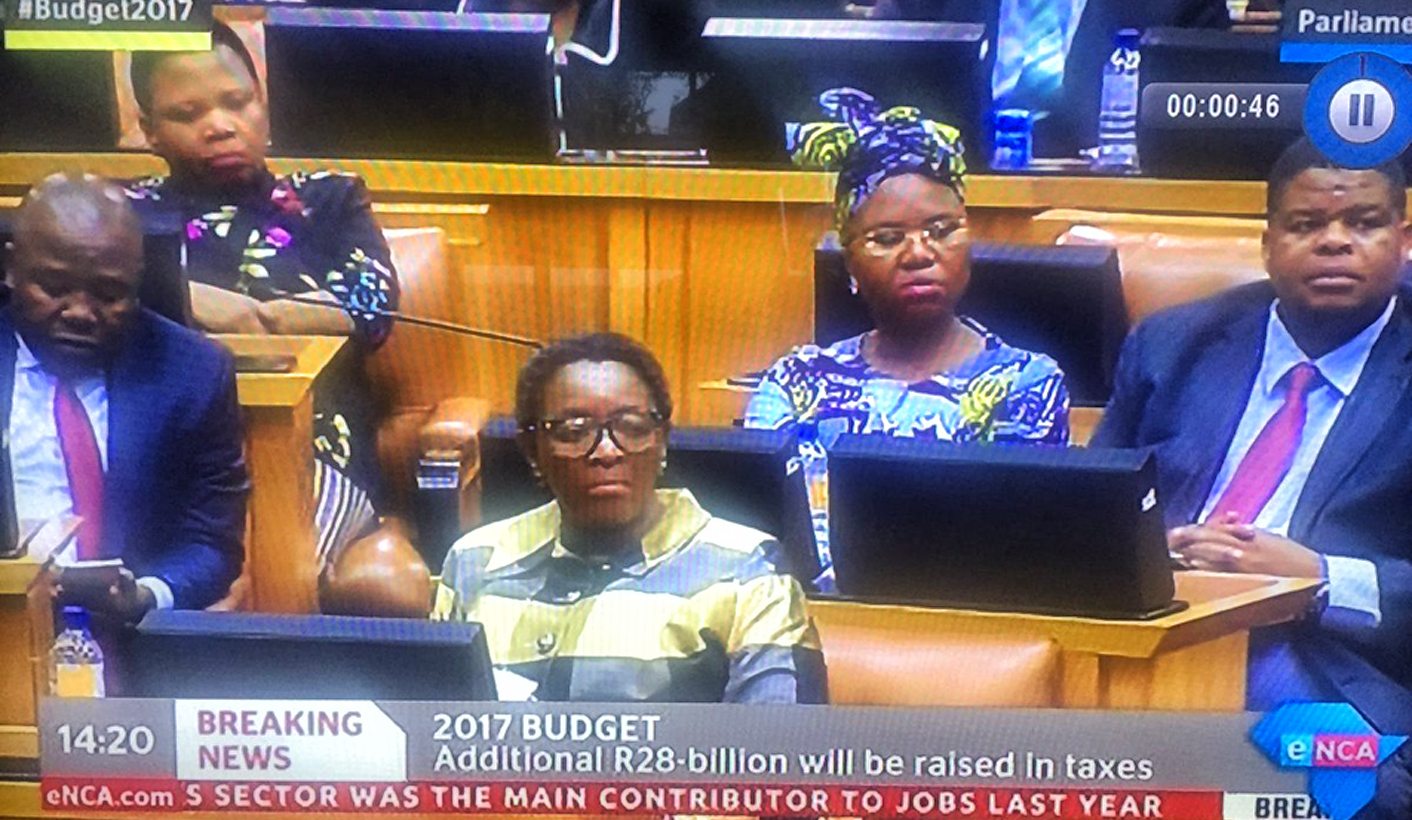 Finance Minister Pravin Gordhan's Budget speech this year is one of those strange occasions where the context was almost overshadowed by the event. The nomination of Brian Molefe to become an MP, the swirling speculation about a reshuffle, the question marks over what will happen in the ANC if that reshuffle happens, and the overall context of the party’s leadership battle all hung over the speech. So any action by ANC MPs in this context is significant. A small group of them decided to do something different this time. While almost all of the ANC MPs stood up to applaud Gordhan at the end of his speech, this small group of ministers sat solidly in their seats. It was a deeply political statement. By STEPHEN GROOTES.

In the hours after Pravin Gordhan’s Budget speech, pictures started circulating on Twitter of this group of people who did not join the standing ovation. One of the images was a picture taken from a paused TV, by the political analyst Justice Malala. He took the picture during the speech itself. Later, another picture, taken by Chris Vick, the spin doctor and current member of Save SA, showed this same group during the actual ovation.

There are several aspects that this group has in common. Two of them owe their entire political careers in national office to President Jacob Zuma. Van Rooyen was a backbench MP whose claim to fame was being run out of his town when he was mayor of Merafong, before he, suddenly, became Finance Minister during that awful weekend of December 2015. Mahlobo has done nothing to distinguish himself in office, except to control the spooks for Zuma. Okay, he did do something special; he jammed the cellphones of journalists and MPs that awful night in the National Assembly in 2015.

There is something about the two of them that almost leads directly to a feeling of contempt. It is clear that both are simply in the pocket of someone, they are not their own men, they do what they are told. Gwede Mantashe once appeared to show open public contempt of Van Rooyen, aware that he would suffer no consequence. And of course Van Rooyen has spent almost as much time in Saxonwold as Brian Molefe. Mahlobo has no constituency of his own to protect him should Zuma cast him aside. This makes them both completely and utterly expendable. If someone were to mount a political attack upon them, it is almost certain there would be no help for them from Luthuli House.

They are not ANC deployees. They are Zuma deployees.

The situation around Dlamini is different. She has been part of the ANC for many years. But, increasingly over the last few months, she has tied herself more and more to the Zuma wagon. On the surface, there’s nothing inherently wrong with that, it’s what politicians in all places do, they pick a champion and go with it. But in her case, she does not appear to even believe that checks and balances on her behaviour should exist. Her treatment of people who dare to ask her questions about the social grant payment fiasco is simply disgusting. She clearly believes they do not have a right to an answer. She does not see herself as accountable to anyone, on an issue that could well turn out to be the worst disaster to hit South Africa since 1994.

She may also be showing that she is not necessarily a competent politician. It was her organisation that decided to issue a statement supporting Nkosazana Dlamini-Zuma to be the next leader of the ANC in the hours before the party’s January 8th Statement. It appears to have backfired, and may even turn out to have been an admission of weakness. Dlamini-Zuma does not appear to have made any progress in this contest since that moment, even as Bathabile Dlamini expresses contempt for the Luthuli House instructions. The league itself has also resorted to releasing statements that simply cannot be understood, as in not making much sense.

The situation around Lindiwe Zulu is more complicated. During the ANC’s 2009 election campaign, no one was more pleasant and fun to talk to; she was open, accessible and human. For months on the trot she wore only ANC colours, her background as an ambassador, and her life story in exile (partly in the USSR) all gave her heft and authority. When she spoke, she received respect. At one point she even had to endure the indignity of being called a “street woman” by Zimbabwean President Robert Mugabe, when she was representing Zuma in mediation efforts in that country. Such was her standing that he then actually apologised to her.

But since she entered Cabinet in 2014, she has shown signs of frustration, even anger. At one point she had to be physically restrained from fighting with EFF secretary general Godrich Gardee. Her attacks on opposition parties also appear to suggest that she does not necessarily believe they have a right to even exist; they are personal and pointed. And it is clear which camp she is in. In the hours after Molefe was sworn in as an MP on Thursday, her Instagram feed showed a picture of her with him, and the message that “change must happen”. In the context, this is an aggressive political statement.

With all of these different back stories, it is still interesting to ask why these ministers stayed seated at this moment. Was it planned and deliberate, or did it just come naturally?

They must have been conscious of the signal that it would send, and have known exactly how it would have looked. Zuma himself did stand and shake Gordhan’s hand as he came down from the podium – if President could do it, why not them? Perhaps Zuma, and the people around him, felt the need to send Gordhan a signal, that he does not actually have their support. In some ways that could be effective, and it would be an obvious signal to him that the war is still under way.

But that raises another question. Why such a small number? If so many people are thought to be still supporting Zuma, and so many others scared of him, then why did so few ministers take part in this sit-down protest? Could it be that actually very few members of Cabinet disagree with Gordhan, and that he has more support than we think? At the very least, this group looks small and weak. And in politics that is never a good message to send.

There are other questions. Basic Education Minister Angie Motshekga once failed to attend an important meeting involving her then position as Gauteng Education MEC in favour of being in the Supreme Court of Appeal to support Zuma. She stood. Energy Minister Tina Joemat-Pettersonn stood. So did everyone else on the ANC benches. So did everyone else on the opposition benches. Which further isolates this small group.

You have to wonder how they believe they will be seen by history. As a small band of crusaders who were shown to be right in their judgement of what was morally appropriate? Or just a small group of has beens who showed that they could be bought, that they did not know and appreciate the difference between right and wrong, and thought that somehow their champion deserved the six-metre statue in his likeness. DM