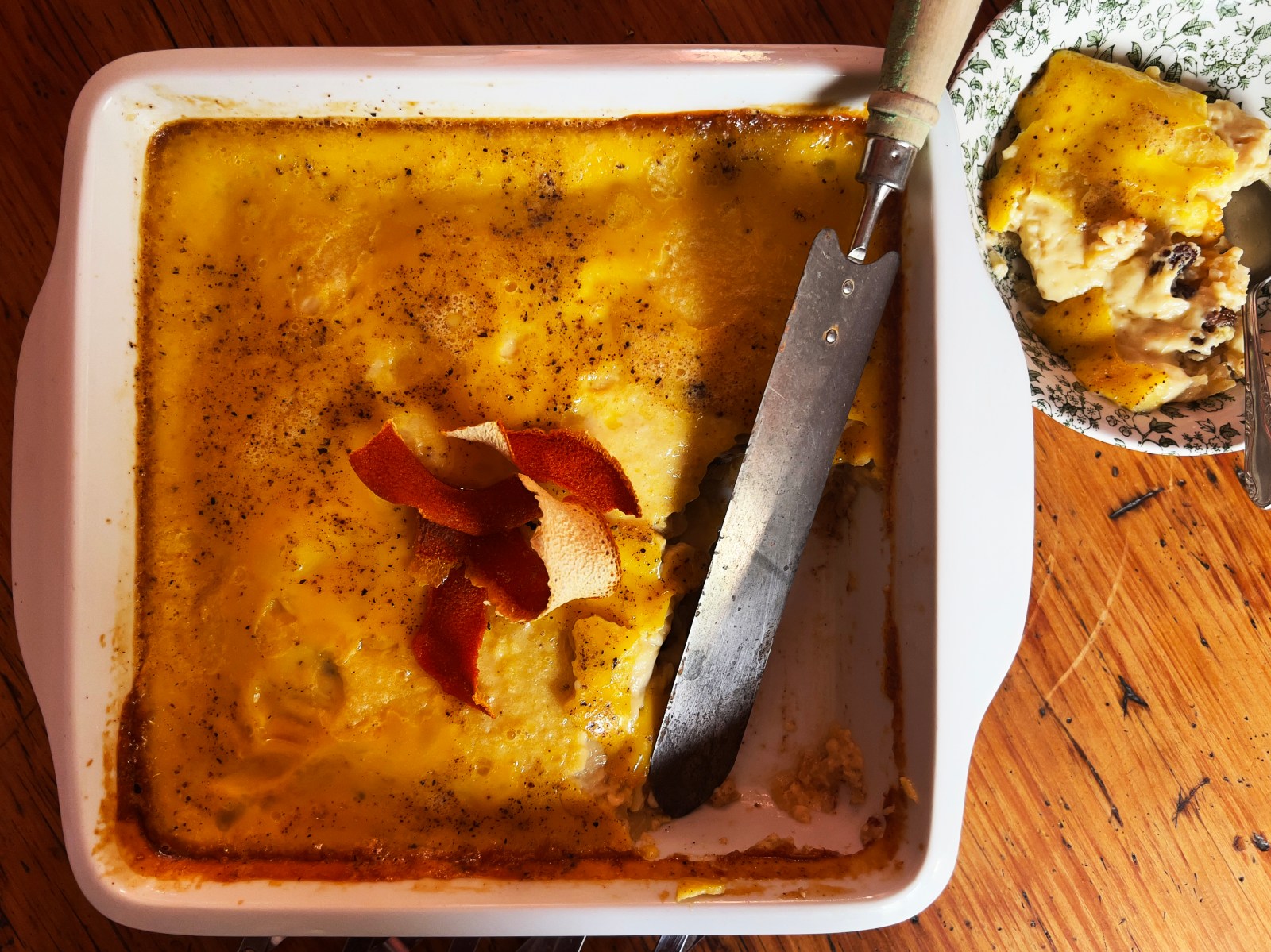 Rice pudding made in the very old-school way can be milky, like a sweet rice soup. Rather soup it up with raisins or sultanas, and use eggs to turn it into a custardy delight.

When I hear the words “rice pudding” I instantly see, in my mind’s eye, my mother’s beige oblong enamel dish with its green trim, the one she always used when she made her rice pudding, once a week. It was the same dish my dad used when he made his potted meat from an ancient Yorkshire recipe. And when my dad ever said “potted meat” I’d immediately have a mental image of the very same enamel dish.

She dotted her rice pudding with knobs of butter, the rice swimming in milk, no eggs in sight, and I loved it, every time. With hindsight, there are ways of improving on it, though, and that’s what I set out to do here. I hope she doesn’t mind, and no, dad, I won’t mess with the potted meat recipe when I finally get around to trying my hand at it. That’s been on the back burner for a very long time.

With that in mind (improving on the old rice pudding), I decided to add a few things. A cinnamon stick. A strip or two of dried orange peel. A handful of sultanas (you could use raisins). And a can of condensed milk.

But the core ingredients remain the same as the old ways: rice, milk, and sweetness.

1 can of condensed milk

Rinse the rice four times in cold water while rubbing the grains with your fingers, and drain. This is the method I was taught by my friend Devi Moodliar (in fact, she advised “ten times” though I find that four is enough).

Put the rice in a saucepan with the milk, peel and cinnamon stick and bring it just to a very gentle bubble, then reduce the heat and simmer gently for five minutes. Be careful that it does not foam up and boil over.

Cover the top of the pot tightly with foil. Leave it to stand for 15 minutes for the milk to be partially absorbed by the rice. Discard the peel and cinnamon stick.

Pour in the condensed milk, off the heat, while stirring with a wooden spoon. Stir in the vanilla essence.

Pour the mixture into a buttered oven dish and leave it to stand for 20 minutes to become cool enough for adding the eggs.

Whisk the eggs and stir them into the cooled mixture. Sprinkle the raisins or sultanas in. Pop knobs of butter on top, here and there. Grate nutmeg over the top.

Bake in the preheated 160℃ oven, uncovered, for about 40 minutes. DM/TGIFood