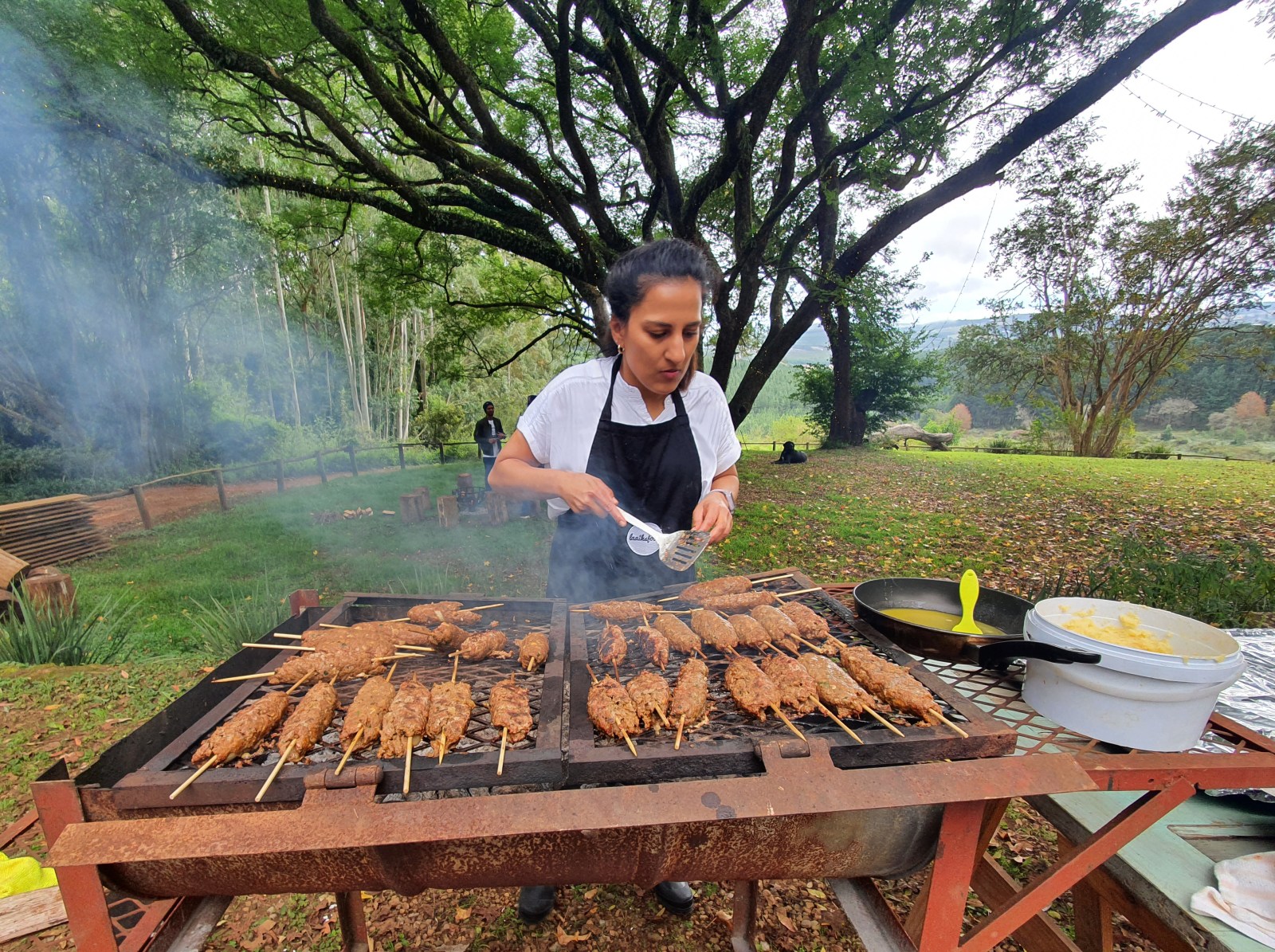 Since lockdown led Laaika Moosa back to her hometown of Tzaneen in Limpopo, she’s been adding fire and spice to the local palate.

Through her cooking classes, popups and bespoke food experiences in the surrounding mountains, Laaika Moosa has introduced an Indian and Middle Eastern culinary tradition back into the Limpopo mix.

“My own food journey started at a young age watching my mother in the kitchen for hours preparing traditional dishes,” says self-described foodie explorer Laaika Moosa. “I was always surrounded by passionate cooks and I learnt my own love of cooking from my mother Zeiboon and her sisters, who were always cooking, not only at home, but doing mass catering for weddings and functions as well.”

After living in Stellenbosch for 11 years, where she studied education and worked as a teacher and school principal, she’s back home, combining her love of teaching with her love of food and cooking. “I didn’t train formally,” says Moosa, “but over the years I have done so many courses and classes, I’ve done countless dinners for friends, catering at the school, parties, functions, events, celebrations, gatherings…”

“It’s all just taken off,” she says, “the master classes, the popups, the food experiences, it’s so exciting. The positive side of being in a small town is that word spreads fast, but I think people are really tired of pizzas and burgers and looking for something new.”

Moosa recently did a popup in collaboration with a local restaurant The Bohemian, which sold out in a matter of hours. The theme was authentic Indian with a fine dining touch. The journey began with thali, a platter of textures and flavours inspired by the streets of Mumbai, which included bhaji, samoosas, aloo chutney and gajar halwa (a carrot-based dessert with nuts and cardamom). And then it took everyone’s taste buds off to the palaces of Rajasthan with the mains – either prawn masala, tandoori- infused prawns cooked with a spiced tomato and coconut milk curry, and lamb rogan josh, a classic lamb cooked with an intensity of spices and with a rich tomato and yoghurt based curry.

For dessert there was a choice of kheer, a warm cardamom and saffron infused rice pudding with almonds and pistachios and served with puri (a deep fried unleavened bread made with whole wheat flour); gulab jamun (aromatic Indian doughnuts dipped in a rosewater syrup) and kulfi ice cream, a traditional Indian ice cream.

“I’m still shaping my style,” says Moosa. “I’m taking my food journey off to Turkey, Greece and Italy later this year to really explore and learn the cuisine from that part of the world.”

A hundred or so people gathered at Mina’s Farm Venue www.minas.co.za in Magoebaskloof recently for Moosa’s North African and Ottoman Journey with jazz. “It’s not just about cooking,” says Moosa, “it’s an occasion. I try to curate the whole experience. It is immersive. It’s about the food, the occasion, the vibe, the music, the conversation.”

There were funky welcome drinks, starters served outside alongside the open fires, and a saxophonist who played in the arrival of the main course, as people gathered at long tables with wine, fire and festivity.

Starters included Middle Eastern labneh dip (labneh is strained yogurt so it’s creamier and thicker since it’s strained from the whey) with roasted cherry tomatoes and hummus bil lahme, (humus with meat) and a smoked beef tartare and aubergine dip. Sides included tsatsiki, beetroot hummus, tabouleh (a traditional Middle Eastern grain salad made with bulgur wheat, fresh herbs, tomatoes, lemon juice, and olive oil, with piquant pomegranate seeds added), and muhammara (a roasted red pepper spread with a complex flavour that is spicy and sweet, savoury, tangy, garlicky and a bit smoky). The beef kebab mains were spiced ahead and done on the open fire as was the puri, an unleavened flat bread.

“I’m currently obsessed with open fire cooking,” says Moosaa. “I just love it. I use fire to create everything from starters to salads, breads and desserts. I love the drama it creates and how it gives food so much texture and flavour.” One of her signature dishes is a fire salad with charred caramelised butternut with feta and dukkah. Another is her famous paella, made with saffron-flavoured rice, prawns and mussels, slowly and lovingly reduced to absorb all the flavours. Paella originates from the Valencia region of Spain and takes its name from the paellera, the utensil in which it is cooked, a flat round pan with two handles. It’s traditionally eaten from the pan.

“Fire brings people together,” says Moosa. “Even when we just go out as friends, I always make a fire. Recently a group of us went to a waterfall up in the mountains and I made this amazing cinnamon tart dessert with pineapples and chai tea, on the open fire, right next to the waterfall.”

“I think my love of open fire cooking is connected to childhood. I have memories of my grandparents cooking on fire and on a coal stove, and my dad doing a braai every Saturday night when we lived in nearby Lestitele Valley. It was quite unusual for Indians. But there we were, enjoying our time together overlooking the banana plantations, my dad making the fire. He was very specific about the fire, about the cut of the meat and about the way it was cooked.”

Moosa’s classes are held at home in a huge kitchen that’s filled with love and warmth and spices and sauces. Originally designed as a teaching kitchen, this is where people gather to cook, and then take it all out into the garden to eat.

“I teach people everything from the basics of Indian cuisine and spices to complex Indian dishes and Middle Eastern cuisine,” says Moosa. “My cooking classes are divided into three categories, firstly, Back to Basics which is an introduction to the spices and flavours of curries and side dishes; secondly Rani, (it means queen in Hindi) where I teach people to make roti and aromatic biryani with sides, and then finally the Ottoman class, which features Middle Eastern flavours and I teach people to make breads, falafel, kebabs and dips.” DM/TGIFood