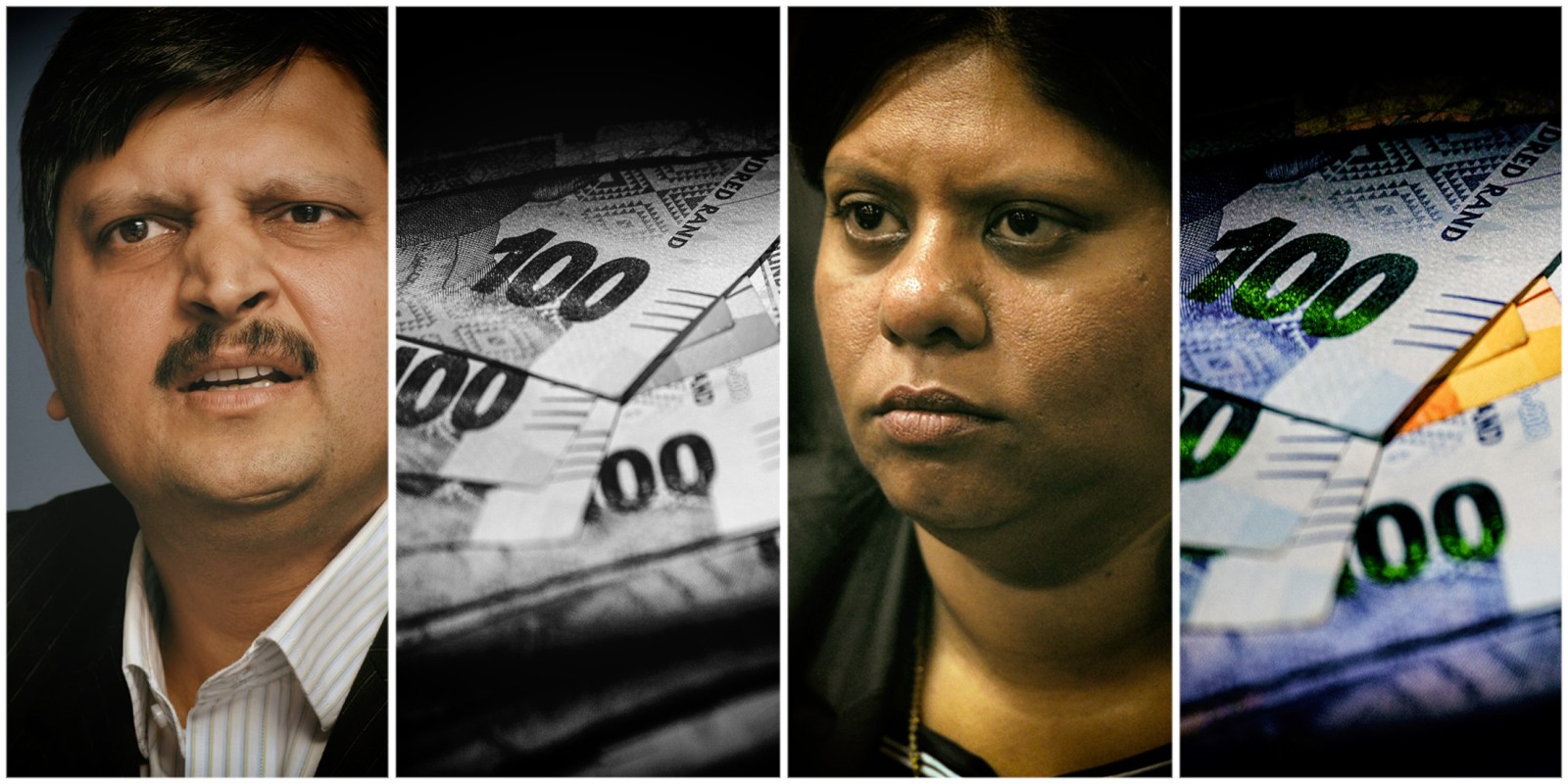 The business rescue practitioners of Optimum Coal appear to be pushing full steam ahead with commercial agreements that entrench a debt-to-equity takeover by a former Gupta business partner. This is despite the NPA’s applications for preservation orders relating to the assets pending before the high court.

The business rescue practitioners (BRPs) and the company lined up to take over the Gupta family’s Optimum Coal business have been gearing up for exports via Richards Bay Coal Terminal (RBCT).

This is despite the National Prosecuting Authority breathing down their necks with high court applications under the Prevention of Organised Crime Act (Poca), and ironically with initial backing from Transnet. The state-owned company and one of its pension funds, the Transnet Second Defined Benefit Fund, were allegedly milked to help the Guptas pay for Optimum just more than six years ago.

Flowing from this, the Investigating Directorate of the NPA filed two applications for preservation orders in December 2021. One was to secure the Gupta shares in Optimum on the grounds that it was bought with the alleged proceeds of crime. The second application was to take hold of a R1.3-billion creditor claim that is now paving the way for former Gupta business partner Daniel McGowan’s Liberty Energy to acquire Optimum through a debt-to-equity deal.

The NPA contends the takeover deal will result in the BRPs committing a money-laundering offence and wants a curator to oversee them.

The applications are set down for March 2022.

Details of the export deal, initially scheduled to start on 16 January 2022, are contained in court papers submitted in a separate urgent application filed by the directors of the Gupta-owned Tegeta Exploration and Resources. The BRPs of Optimum Coal Terminal (OCT) published a rescue plan in late October 2021 that would have been voted on at a section 151 meeting.

But on 9 November 2021 Tegeta directors, led by Ronica Ragavan, obtained an urgent interim interdict preventing them from convening a meeting pending the outcome of a second part of their application.

The second part, partly to determine who may vote on that OCT rescue plan — the BRPs or the directors of Tegeta — was heard in the High Court in Johannesburg on Friday, 14 January 2022 and judgment is scheduled to be handed down on Tuesday, 18 January 2022. Adoption of the OCT plan is a critical condition for the final implementation of the Optimum Coal Mine (OCM) business rescue plan in terms of which Liberty will acquire the business.

In it, the company’s CFO, Ulrich Bester, said Liberty stands to suffer a direct and substantial loss if the OCT plan is not approved by mid-January 2022. He said Liberty had taken cession of a R95-million RBCT creditor claim in OCT on 10 November 2021, and believes it became the largest creditor in OCT in the process.

On the back of that cession, RBCT agreed, Bester said, to permit coal exports using OCT’s slot allocation for roughly eight weeks, until the end of March 2022.

Bester said this was conditional upon the OCT plan being adopted and, importantly, on Transnet agreeing to provide the company with rail facilities. He said an agreement had been “concluded” with Transnet. The Transnet factor appears to have complicated things for both Liberty and the BRPs.

Roughly 24 hours before the case came before Judge Margaret Victor on Friday, 14 January, Ragavan responded to Bester’s affidavit, and rather ironically questioned how Transnet could have done such a deal. Ragavan said it would be “truly remarkable “for Transnet to have entered into such an agreement given the NPA’s case of alleged illegality around Optimum and Liberty’s takeover bid.

‘It would amount to the State perfecting the very crimes which it alleges will be committed if the OCM and OCT plans are performed,’ Ragavan said.

Ragavan had taken issue with the fact that the Transnet agreement, referred to by Bester, was not put before court.

Bester later set the record straight when he said that at the time of filing his initial affidavit he had been advised that the rail deal with Transnet was a done deal. It turns out that Transnet, although having negotiated with the company to a fairly advanced stage, had not signed.

An affidavit by Bouwer van Niekerk, attorney for the BRPs, suggests that negotiations for the rail deal date back several months before the NPA’s preservation applications went live.

The Tegeta team came under attack from counsel for the BRPs, who accused them of being “puppets” of the Guptas, who are out to use the NPA’s case to shore up their own. They maintain the NPA’s Poca applications have no bearing on this case and that Tegeta’s case is just a continuation of tactics adopted once they realised the BRPs would not simply dance to their tune.

If the Guptas are successful in this court case the NPA need not be too concerned just yet, as it will aid its own efforts to delay conclusion of the OCM business rescue plan until its preservations applications are heard.

But, should Tegeta lose at court and the interim interdict is discharged, the NPA will have to swing into action immediately.

Details of its battle plan are contained in a scathing letter the State Attorney allegedly sent to the BRP’s attorneys on 10 January 10.

Ragavan slipped the six-page document into the court record. It was not accompanied by a confirmatory affidavit from the author and the BRPs were extremely unhappy because they say they had not received it from the State Attorney.

Writing on behalf of the NPA, the State Attorney’s office put the BRPs on terms by seeking an undertaking that they will not proceed with the implementation of the OCM business rescue plan until the NPA applications are heard in March. 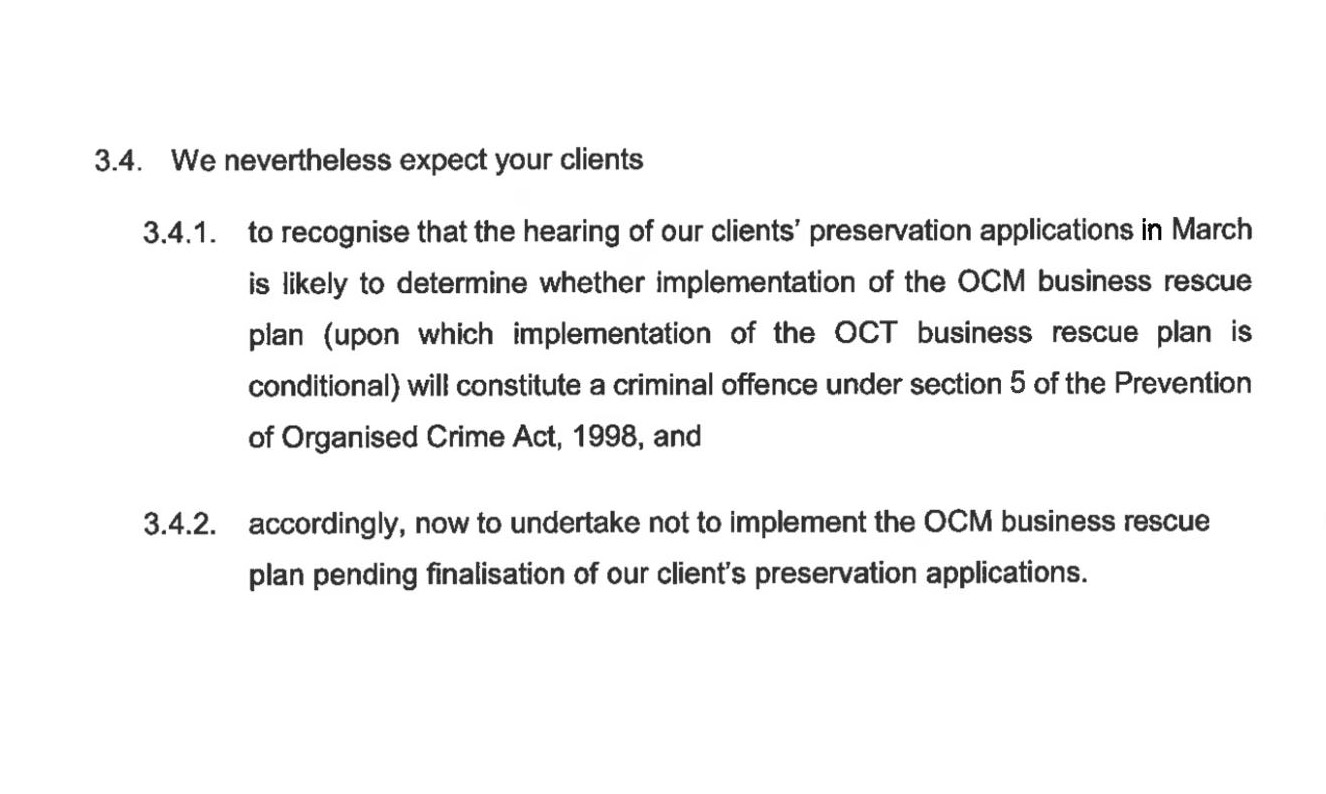 Lawyers for the BRPs had seemingly previously told the NPA it would be premature to provide an undertaking that they would not implement the Optimum rescue plan, but they have now served notice of their intention to oppose the preservation application.

The letter states that the NPA intends to bring urgent interim preservation proceedings if the Gupta interim interdict is discharged and should it be necessary, another urgent interdict to block the BRPs from convening an OCT creditors meeting.

It also questions the accuracy of claims that a rail transport deal had been struck with Transnet as Liberty had claimed.

The BRPs had “proposed” a long-term agreement, but this was not signed, it states. “Transnet is an organ of State with particular duties in relation to dealing with counterparties who have benefited from the proceeds of crimes against other organs of State.”

And Transnet, the letter says, was the primary victim of State Capture on the part of the Guptas.

Extremely rushed responses to the letter filed by Van Niekerk and Bester on Friday suggested the agreement with Transnet, while not signed in the end, had been negotiated over several months dating back to at least June 2021. In fact, Van Niekerk states that the BRPs had signed an executory version of the contract in September 2021 and believed it was a mere formality for Transnet to sign.

Wrapping up the NPA’s argument on this, the letter states: “Whatever the situation may have been before, Transnet is now fully aware of the NPA’s case and there is now no meaningful prospect that it would do a deal designed to facilitate Liberty’s takeover of Optimum on the back of proceeds of State Capture crimes against Transnet itself, the pension fund, and other organs of State.” DM