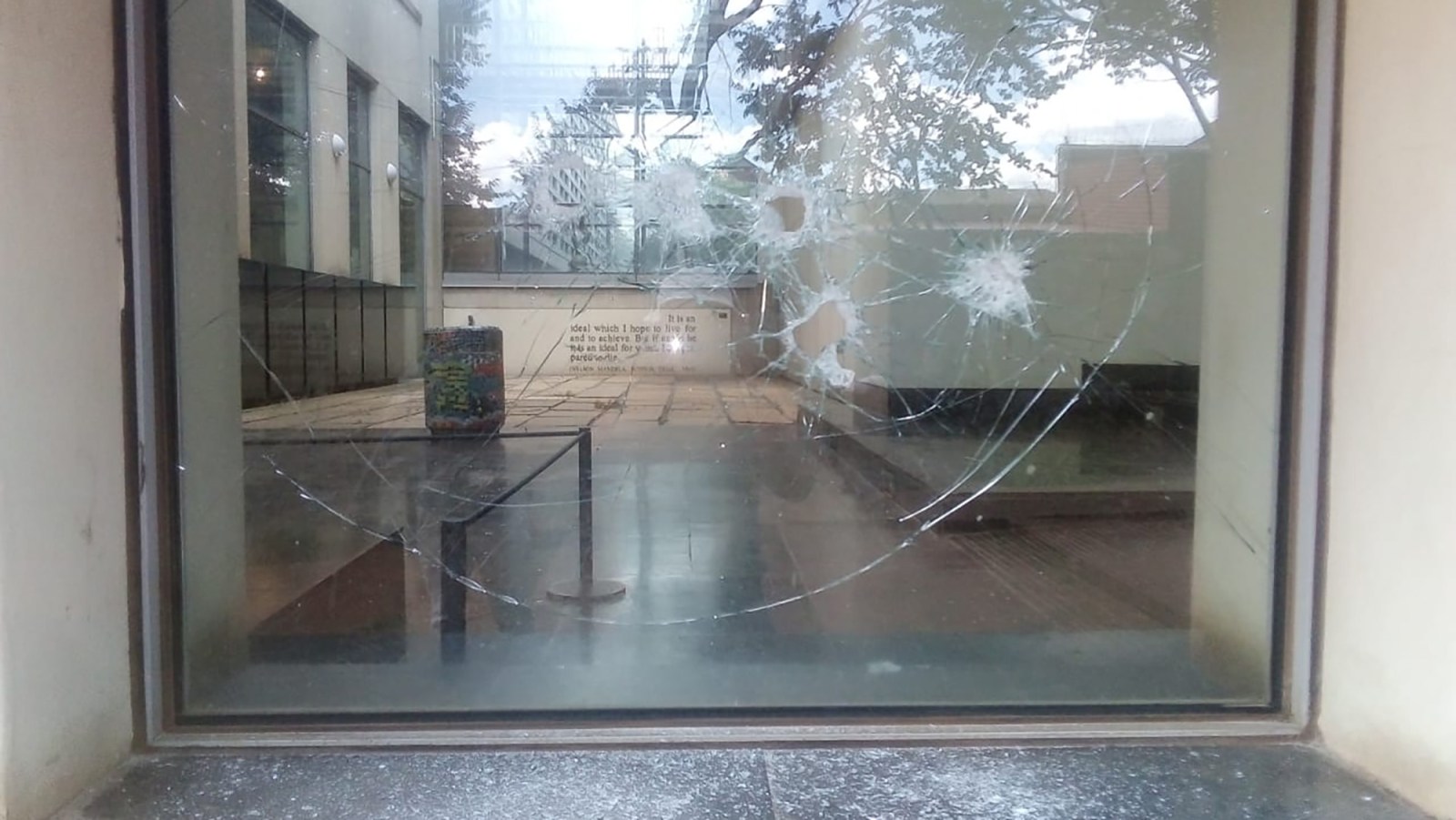 Considerable damage was done to the main entrance of the Constitutional Court in Johannesburg, South Africa on 5 January 2022. (Photo: Bheki Simelane)

The actions of a man who went on the rampage and damaged the Constitutional Court building with a hammer have been widely condemned.

Police have arrested a suspect accused of using a hammer to smash the glass doors and windows of the Constitutional Court in Johannesburg on Wednesday morning.

The main entrance to the Constitutional Court was littered with shattered glass following the hammer attack and Daily Maverick counted at least 28 cracks and holes in the glass windows and doors during a visit to the premises in Braamfontein on Wednesday.

The police have confirmed that a 36-year-old suspect has been arrested.

Police officers had responded to reports of a man breaking the windows of the Constitutional Court with a hammer. They fired a warning shot after the man continued to break the windows despite being ordered to stop.

The suspect will appear in court to face a charge of malicious damage to property.

Considerable damage was caused, mainly to the windows and glass doors next to the main entrance of South Africa’s apex court.

A Constitutional Court security guard, who spoke to Daily Maverick on condition of anonymity, said he did not hear or see anything untoward until after the incident. “I was on the other end of the property,” he said.

The incident follows the destruction of parts of Parliament during a blaze that started on 2 January, which led to the arrest of 49-year-old Zandile Christmas Mafe, who is facing charges that include housebreaking, arson and possession of explosive devices.

“The site of the Constitutional Court is a historical landmark as it represents our struggle for freedom. It was specifically designed to reflect the values of our new constitutional democracy and Nelson Mandela himself called the building ‘a beacon of light, a symbol of hope and celebration’,” said Lamola.

Civil society group Judges Matter said, “Judges Matter is relieved that the suspect responsible for this attack has been arrested and we commend the SA Police Service for its swift action. We nevertheless remain concerned that a person can, by hand, cause such damage to a National Key Point. We shudder to think what could have happened had he had a more powerful weapon.

“Judges Matter therefore calls on government to take urgent measures to protect critical institutions of democracy from harm while at the same time making sure that they remain accessible to ordinary South Africans.”

Political analyst Dr Ralph Mathekga warned against interpreting the hammer attack and the Parliament fire as a coordinated threat to national security.

“This is the state of the ongoing decay that is reflective of the whole broader public service. There are lone actors and there are serious people and so on. I don’t want to think that our institutions are under severe threat,” said Mathekga.

It is believed that the suspect will appear in court in Johannesburg on Thursday morning, but on Wednesday night this had not yet been confirmed by the police. DM