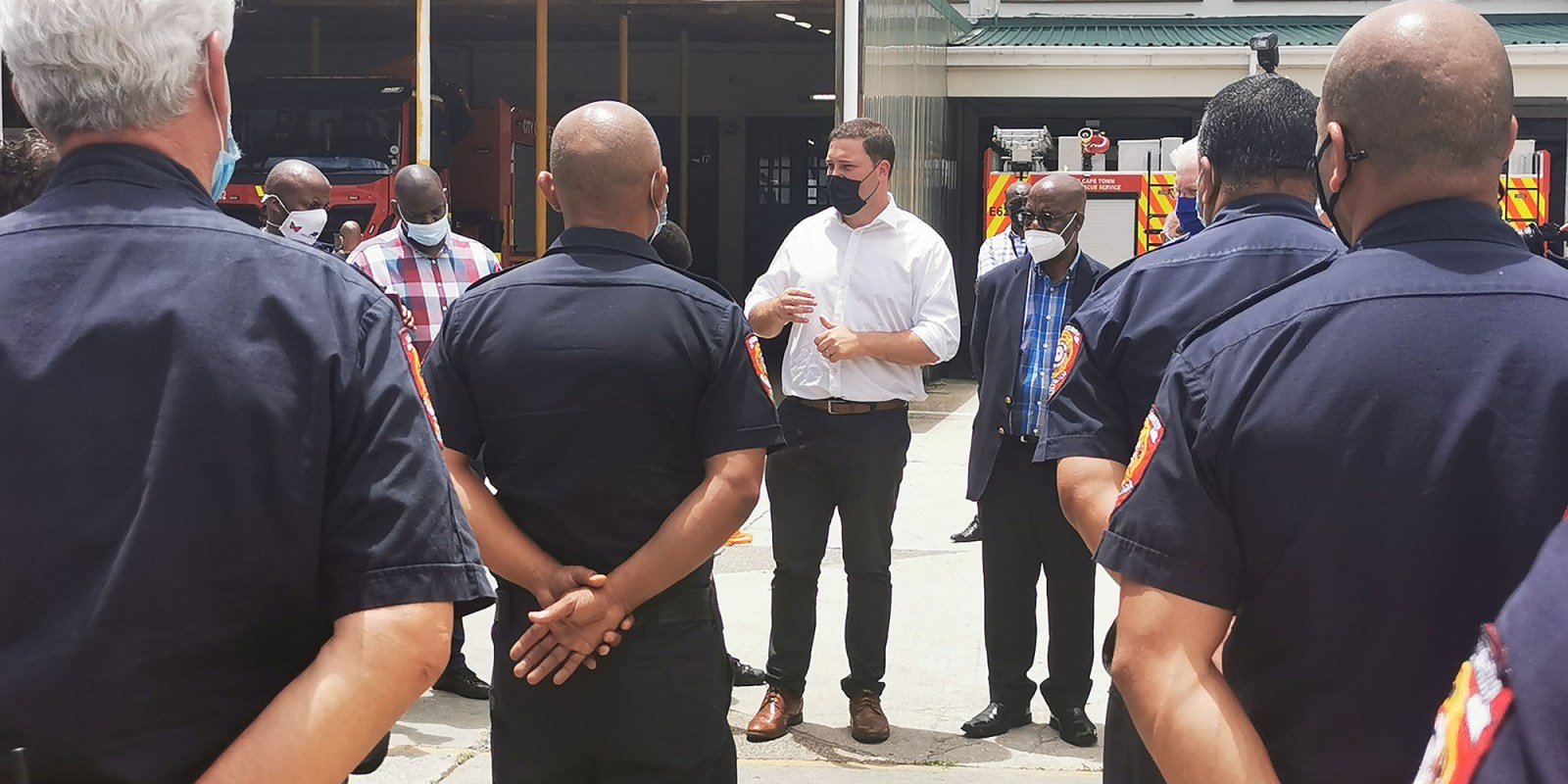 Parliamentary and City of Cape Town officials thank firefighters who battled to contain the widespread fire that began at the parliamentary precinct over the weekend. (Photo: Suné Payne)

As mopping-up operations got under way in the wake of the devastating fire at Parliament, senior officials and City of Cape Town leaders thanked firefighters who battled to contain the blaze.

The fire that destroyed parts of the National Assembly has been contained, Parliament officials confirmed on Wednesday as they, with City of Cape Town officials, thanked the firefighters who have been working since Sunday, 2 January to put out the blaze.

In a statement, Parliament confirmed that five crew and a fire engine were still working within the parliamentary precinct to ensure there were no more flare-ups.

“The last 24 hours had been critical, with firefighters closely monitoring and combing through the scene,” said the statement.

Since Sunday morning, 300 firefighters have struggled to contain the blaze. Parliament said firefighters would make a final assessment before their withdrawal and check if the building could be safely handed over to the police.

“The extent of the damage in the NA is severe,” said the statement.

It confirmed that the parliamentary mace had been retrieved after the fire had been burning for two days. The mace, carried into the National Assembly chamber, announces the arrival of the Speaker and signals the House is in session.

Parliament also said the Keiskamma tapestry in the Old Assembly Building had been saved. The tapestry, 112 metres long and 70 metres high, was made by women at the Keiskamma Art Project from the Ngqushwa region of the Eastern Cape.

“It is proper that we say ‘thank you’ to you and also to your families because as you would go back home, you’d find your families waiting for you not knowing whether you were safe when you were gone,” said Mapisa-Nqakula.

“You have our help; you have our support. Whatever we can do as the city, we will do… Parliament must continue,” said Hill-Lewis.

Firefighter Tashreeq Samuels told Daily Maverick that it was “always an honour to have them come around our station and present themselves to us… to even give us a fist-bump in this Covid pandemic, which is very rare”.

Samuels, from Brackenfell, said he is two months shy of 10 years as a firefighter.

“As a firefighter, you are prepared for an instance. When you get a call, you prepare yourself well and you get the proper PPE for that call,” said Samuels.

He felt it was their responsibility to save the entire Parliament, not just the art in its halls.

“We do not focus on special items and things like that… that’s not our focus. Our focus was mainly on the fire. So we try to prevent fire from spreading anywhere, everywhere… But we managed to save everything, not just one special thing.”

Mapisa-Nqakula touched on News24 reports that firefighters did not receive sufficient food or drinks while fighting the blaze.

“I must also apologise, embarrassingly, because I learnt the day before yesterday you did not have water,” she said.

The Speaker said that between her and Public Works Minister Patricia de Lille, food had been organised for the firefighters.

Meanwhile, the next court appearance of Zandile Christmas Mafe, the man suspected of setting the fire — and accused of theft, possession of an explosive device, two counts of arson and destruction of essential infrastructure — has been postponed for a week to allow for the gathering of more evidence and information. DM