GREASING THE WHEELS OF POWER

The ultimate gift guide when shopping for your politician this Christmas 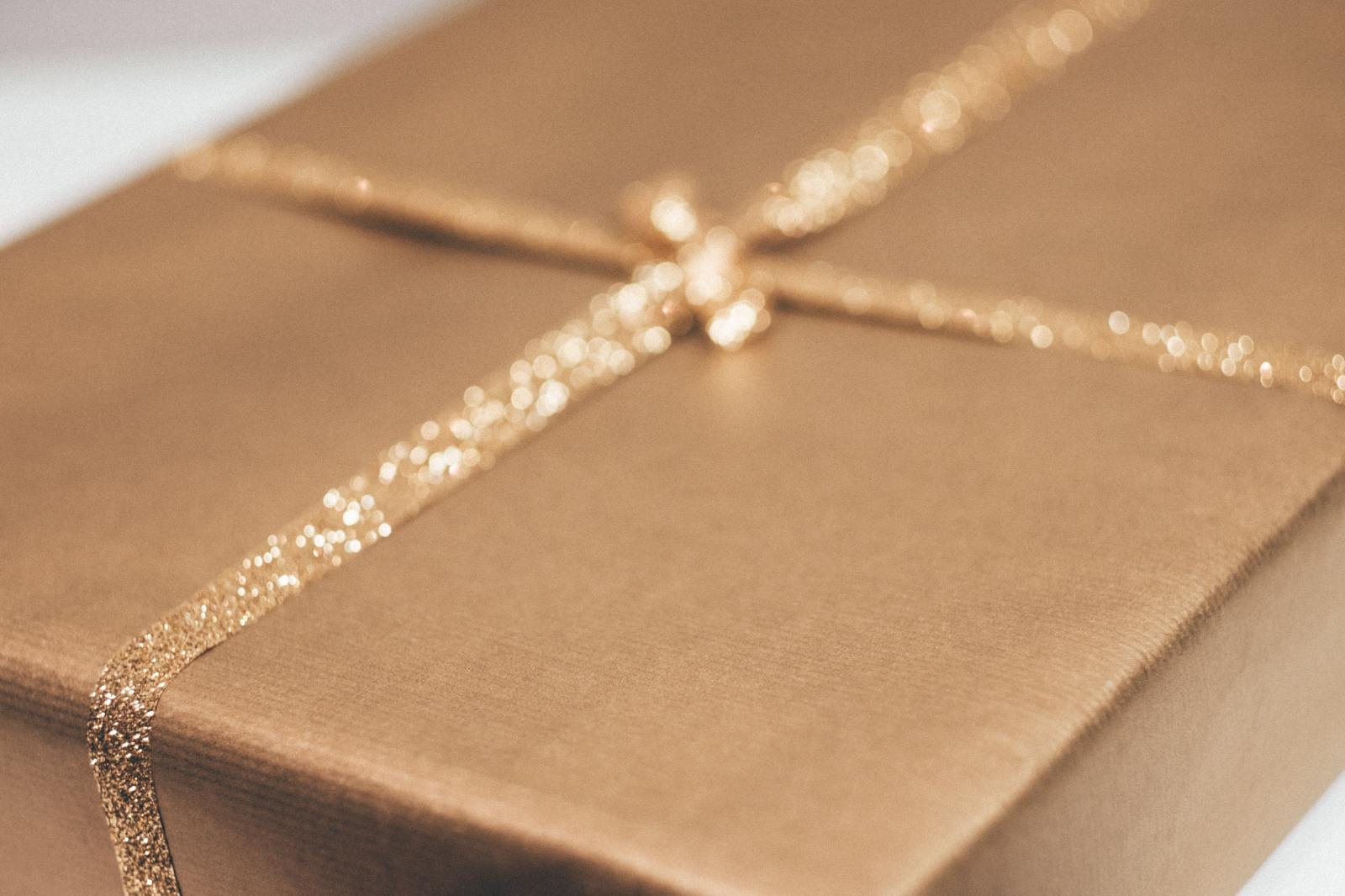 The Christmas season has arrived and with it comes the familiar question: ‘What gift should I buy my politician this year?’

Currying favour isn’t as easy as it used to be and in 2021 we’ve seen the scale of munificence expected by our elected officials — from Land Cruisers to nail salons. This can be disheartening to salt-of-the-earth brownnosers like you and me, whose budgets do not (yet) enable such lavish spending. However, do not lose hope – I have dug through the archives of “declared gifts” by Members of Parliament to give you a few ideas about what your politician may enjoy receiving. Armed with data from more than 7,000 declared gifts, the following analysis will help you tug directly at the heartstrings of your chosen political puppet.

Note: Not all politicians deserve presents this year and, for those who have been bad, it is perfectly okay to leave them with coal-itions in their stockings.

Where the data comes from

Members of Parliament (MPs) are expected to register their financial interests, which includes declaring gifts received. Each year, Parliament publishes these declarations in an annual report, found here. The 2020 PDF report alone contains 866 pages, which would be a nightmare to comb through to spot useful patterns. Luckily, there is a website called the People’s Assembly which collates and distributes data about Parliament in an open format, to enable “better scrutiny of our elected representatives”.

Using data they have made available, I was able to extract the following dataset on MPs and their declared gifts: 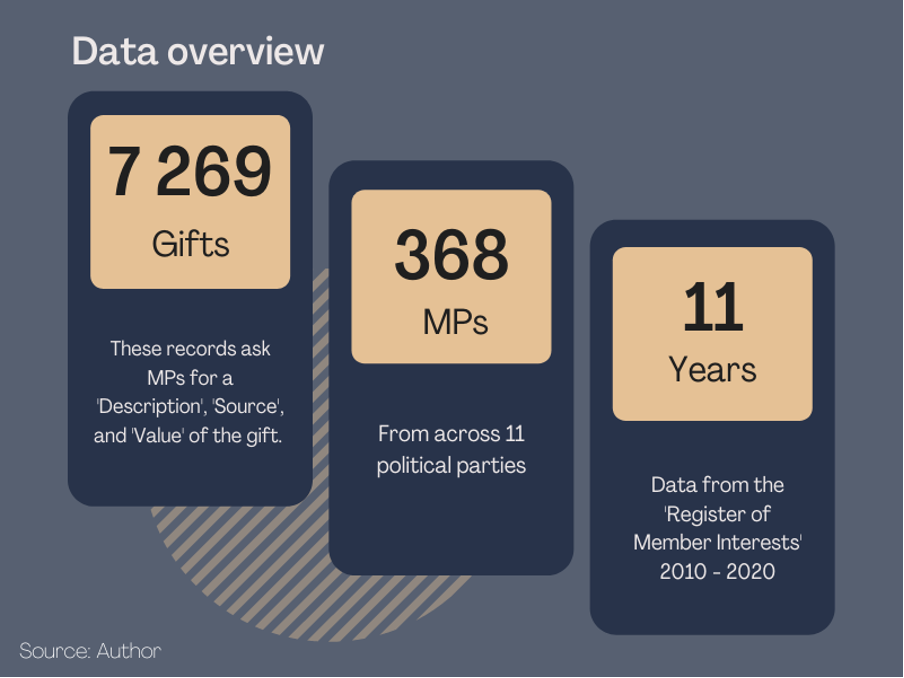 Looking a gift horse in the mouth

No horses have been declared, according to the registers, but there have been seven instances of horse statues being gifted to MPs. Sheep, on the other hand, seem to be prolific, with 28 instances of actual sheep being given as gifts. My favourite sheep-based entry is from 2015, when Nhlanhla Nene recorded the description simply as “a sheep, Cellini travel bag and four-wheel trolley” — which is certainly the most bespoke gift basket I’ve ever heard of. I’m assuming the four-wheel trolley refers to a standard-issue plastic Checkers trolley which was thoughtfully “procured” by the giver to transport the newly gifted sheep —  sheep-skates by cheap-skates.

However, not all gifts are this unique. In fact, there are some gifts which show up repeatedly, across politicians and across years. The graph below shows the top 20 gift register entries and the number of times they appear in the dataset. 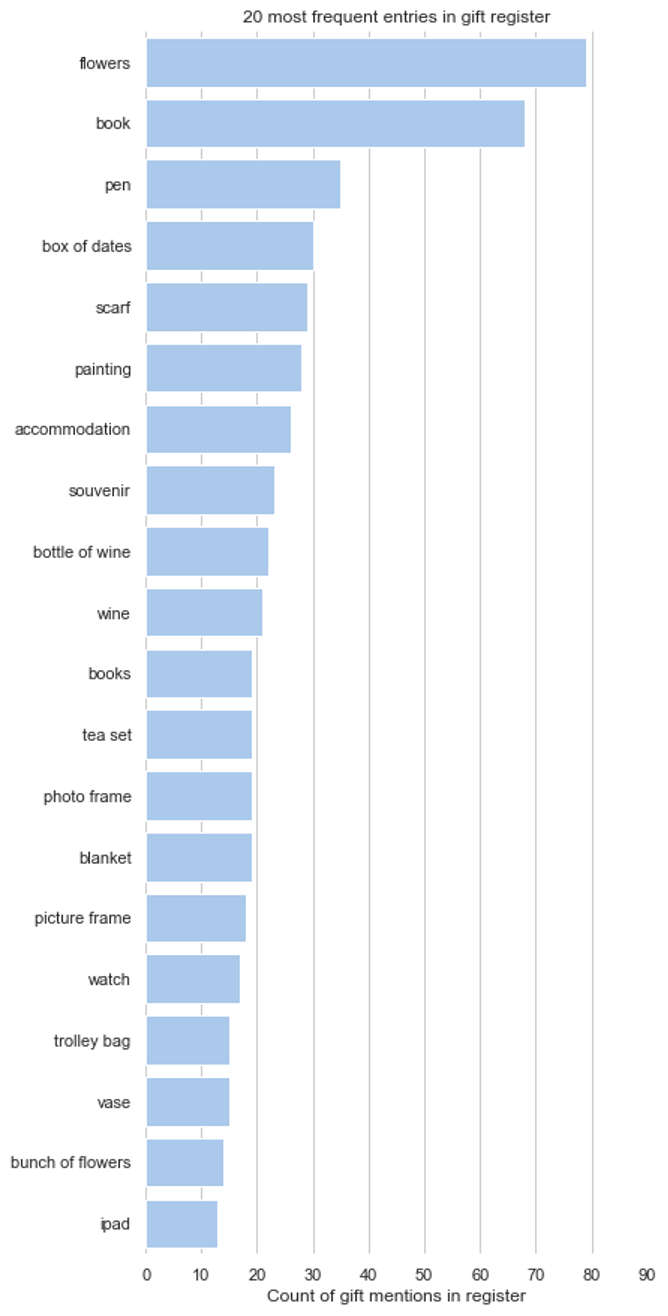 Flowers, books and pens unsurprisingly top the list, but boxes of dates and scarves snapping up fourth and fifth place are a surprise. Turns out politicians have the same taste as my aunties in Fordsburg.

While the above shows the count of entries with exactly the same phrase written into the gift register, another technique for analysis is to count the number of times a certain word comes up across entries, regardless of the surrounding phrase. With this approach, the word ‘book’ comes up the most frequently. ‘Book’ appears in 870, or 12%, of the gift records.

Books are a lovely way for you to grease the wheels of power this festive season. They provide an opportunity to send a subtle message to your politician. You can remind them of your role in their lives, tell them what you’d like them to do more of, or mention whom you’d like them to emulate. Titles given in the past to our MPs include:

The perks of power have decreased over time. The year 2010 was evidently the best time to be a politician, and the detailed records show the numerous Fifa World Cup match tickets gifted to MPs, as well as the gifts brought by foreign guests visiting SA to watch the games. The period between 2011 and 2013, or the “Table Mountain” portion of the above graph, was another boom period in political gift-giving — right before the national election early in 2014 — after which the “Lion’s Head and Signal Hill” portion of the curve kicks in and by 2019 we are steadily declining towards a possible “Sea Point Promenade” type curve — where the count of gifts flatlines at an all-time low. Going one level deeper, we can also examine trends in the type of gifts given.

Despite the fluctuations in overall gift-giving, the above chart shows that the number of nuts making their way into Parliament has remained relatively constant over the past 10 years, which appears to confirm other analyses of the institution. In 2020, “alcohol” overtook “clothes” as the second most popular type of gift given —  concurring with evidence that an increase in alcohol brings a decrease in clothes.

Grift of the givers 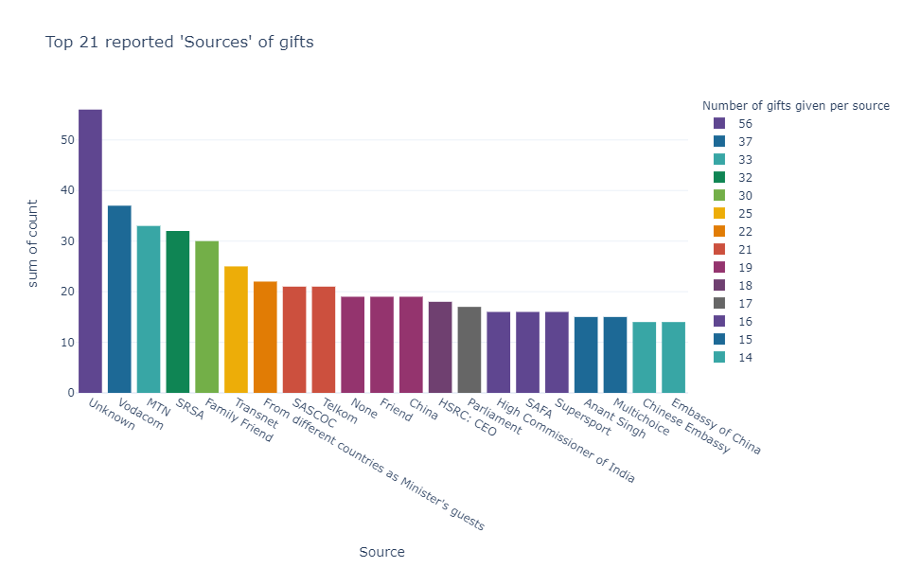 Gifts from an “unknown” source are the most common, clearly indicating that Secret Santa is a more popular practice than previously predicted in the annals of power.

Moreover, the bar graph sheds light on the possible etymology of the phrase “My China” in the South African lexicon, with the high frequency of gift-giving by the Chinese.

Now, for all of the first-time gift-givers reading this who are nervous about their names entering the public record, I hope the above chart brings some ease. As long as you are considered a “friend” or “family friend”, you can completely circumvent public scrutiny.

In closing, I wish you the very best in your attempt to ascend the political ladder this holiday season. You have a once-in-a-decade chance to strike while the political gift-giving trend is low and impress with your newfound knowledge that politicians may enjoy receiving books or alcohol. These are insights which can only come with the power of modern data analysis and I am humbled to be able to gift these insights to you —  expecting no reciprocation from you at all, for the moment.

I’ll leave you with a carol:

On the third day of Christmas
My good friends brought to me
A sheep,
A Cellini bag,
And a four-wheel trolley

Technical note: For the data storage, I used PostgreSQL with a local copy of the People’s Assembly site (extracted on 4 December 2021). For the data cleaning and visualisation, I used Python — with the graphs produced using the Seaborn and Plotly packages. DM

Fuaad Coovadia is an economist by training who uses data to solve problems, create stories and – occasionally – tell jokes.