Despite evidence and dodgy deals, Office of the Auditor-General says fogging is ‘not irregular Covid-19 expenditure’ 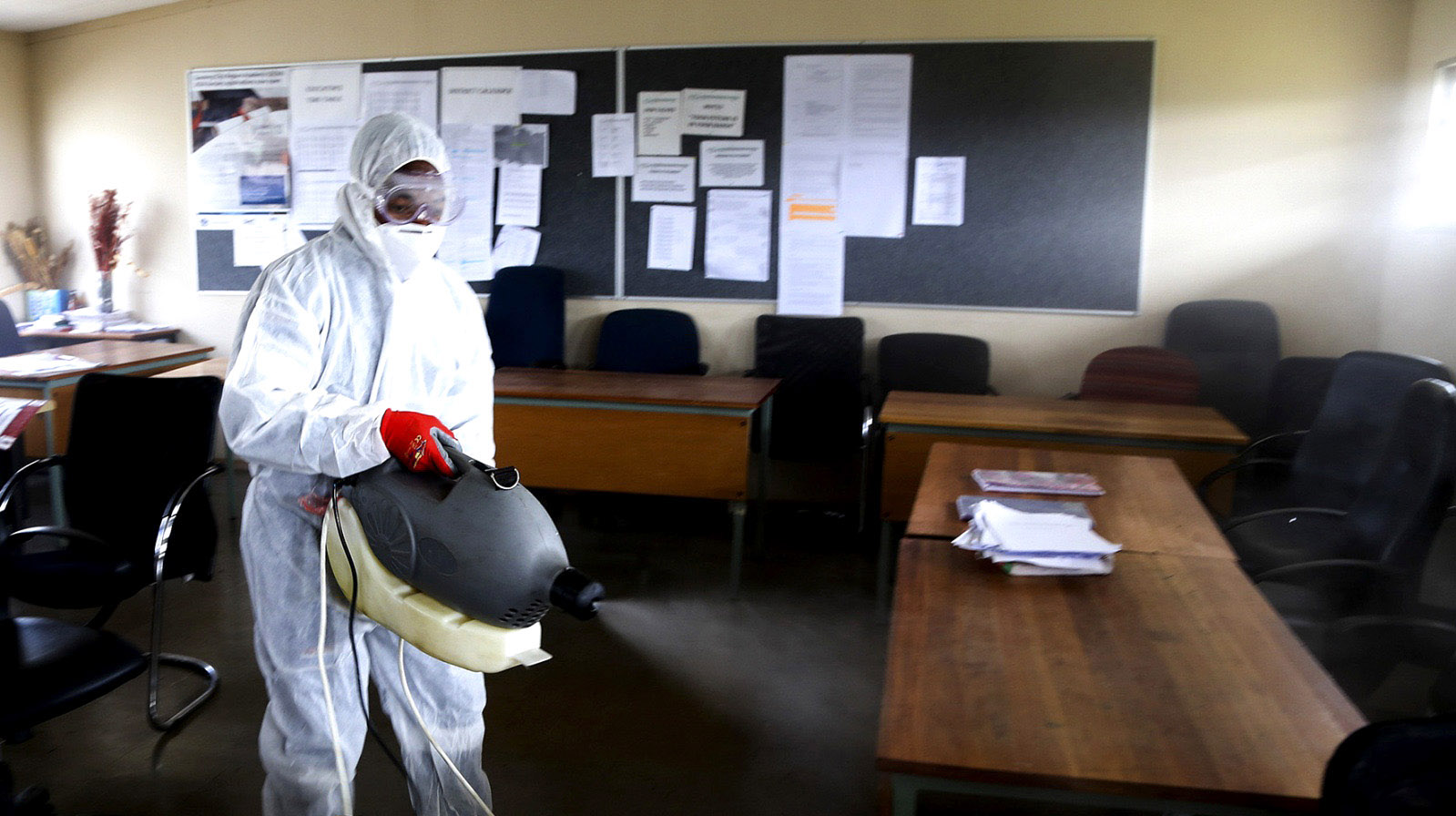 A general view of Far North Secondary School being disinfected before the reopening of schools on May 25, 2020 in Johannesburg, South Africa. (Photo: Gallo Images/Luba Lesolle)

In a disappointing decision, the office of the Auditor-General has decided that fogging — one of the most unnecessary examples of Covid-19 expenditure — should not be classified as either fruitless and wasteful or irregular expenditure. Why? Because whilst being aware that it was not recommended by the Department of Health and Department of Public Service and Administration, the Auditor-General could not find evidence that government’s recommendations were communicated to accounting officers.

Throughout 2020 and 2021 Maverick Citizen has investigated and drawn attention to up to R4-billion spent on unnecessary ‘fogging’ and ‘deep cleaning’ of government buildings for Covid-19. We have identified over 100 orders for fogging on the Treasury online dashboard.

We reported how these practices were deemed unnecessary — and potentially dangerous — by the World Health Organization (WHO) as long ago as May 2020. Yet they continue to this day.

Recently, the Independent Electoral Commission (IEC) was caught contracting a fogging supplier for the voter registration weekend for local government elections — but ditched its suppliers after being exposed by Daily Maverick.

The latest request we have seen comes in early December from the Grahamstown Legal Aid office which reports that it is “in urgent need of decontamination services” and makes a “request for quotations and supply chain management documents.”

So far, however, the only department we are aware of where there appears to have been legal action to recover wasted monies is the GDE where the SIU has instituted legal action. A judgment of the Special Tribunal on an application to invalidate 73 deep-cleaning contracts is awaited.

In the face of this apparent impunity, in October 2021 Corruption Watch submitted a detailed memorandum to the Office of the Auditor-General (AGSA) that reviewed the science and guidelines issued by the World Health Organization, as well as advisories and instruction notes from government departments from as early as 30 April 2020.

On these grounds, Corruption Watch “motivated for the use of fogging to be regarded as fruitless and wasteful expenditure.” It advised:

“that the AGSA undertake the necessary technical processes to assess whether the recommendation to classify fogging as a Covid-19 decontamination approach as fruitless and wasteful expenditure can be implemented. We believe that doing so would help ensure that public finances are better utilised and reduce the corruption risks that have been arising from fogging-related contracts.”

Last week the AGSA included a section on the ‘Financial management of Government’s Covid-19 initiatives’ in its 2020-21 Consolidated General Report on National and Provincial Audit Outcomes. According to the AGSA, it had undertaken “to identify material irregularities” in its audits and special investigations and “to share our findings, risk indicators and data analyses with the Fusion Centre, which was established to deal with investigations into fraud and corruption relating to Covid-19.”

However, the AG’s report once again makes no mention of fogging as one of the biggest causes of fruitless and wasteful expenditure.

In response to questions from Maverick Citizen, the AGSA provided a response titled: “AGSA position on the treatment and impact of fogging expenses incurred by the auditees in response to Covid-19”.

The response explains that “fruitless and wasteful expenditure, is defined in the Public Finance Management Act (PFMA)as expenditure which was made in vain and would have been avoided had reasonable care been exercised.” (Our emphasis).

“The Fruitless and Wasteful Expenditure Framework issued by NT in terms of section 76 of the PFMA defines “vain” as an expenditure which was undertaken without value or substance and which did not yield any desired results or objectives.”

The AGSA continues to point out that: “The PFMA defines “irregular expenditure” as “expenditure, other than unauthorised expenditure, incurred in contravention of or that is not in accordance with a requirement of any applicable legislation…”

However, on the basis of its interpretation of the law, and despite scientific evidence to the contrary, the AGSA concluded that “from auditing perspective we cannot determine that fogging did not yield the desired results or objectives, which were to eliminate the Covid-19 virus … it is not evident that reasonable care was not exercised by the accounting officers.”

That’s not what investigations by the SIU, SARS and Maverick Citizen suggest.

It noted that “The DPSA and NDoH [had] issued the communication indicating that fogging was not recommended, [but] we could not find evidence of this being formally communicated to all accounting officers for PFMA auditees.” (Our emphasis).

So whilst the NDoH was spending R150-million on Digital Vibes as its communications consultancy, it wasn’t able to communicate its own recommendations to other government departments?

The AG’s response concluded, “It is worth noting that irregular expenditure cannot be determined on an overall basis, therefore should be considered on a case-by-case basis against applicable procurement-related legislation.

The AG promised that “instances where we have reported irregular expenditure will be contained in the audit outcomes of national and provincial governments” that were tabled with Parliament on 8 December.

This report totted up fruitless and wasteful expenditure to the amount R1.72-billion, of which R0.9-billion — 52% — was in the departments of Health and Education, as well as the DPSA.

It found that Gauteng has spent R378.4-million in fruitless and wasteful expenditure, a trebling from R103-million the year before — “mainly attributable to the procurement of personal protective equipment.” If it had included fogging, Gauteng alone would have topped R1-billion.

On the subject of irregular expenditure, it found that this had increased to R166.85-billion, (from R109.82-billion in the previous year) noting that “Such expenditure, especially as it relates to procurement, is an indication that auditees do not follow supply chain laws and regulations when making decisions.” It lamented that:

Sadly, it seems that on fogging, the AGSA has chosen a path of least resistance, despite evidence of flagrant abuse.

One consolation may be that in its Consolidated Report it refers to 131 companies about whom it shared information with the Fusion Centre, adding that many of these companies were also flagged by the Special Investigating Unit, which “has confirmed irregularities, amounting to R1.05-billion, at 31 of these entities and … is still investigating 77 entities”.

Last week the Presidency reported that the SIU has submitted its “final report into allegations of corruption by parties in the public and private sectors in the procurement of personal protective equipment at the onset of the Covid-19 pandemic.”

One can only hope that some of the uncontradicted investigations and findings we have made about fogging have found their way into that report and become the basis for future prosecution. DM/MC