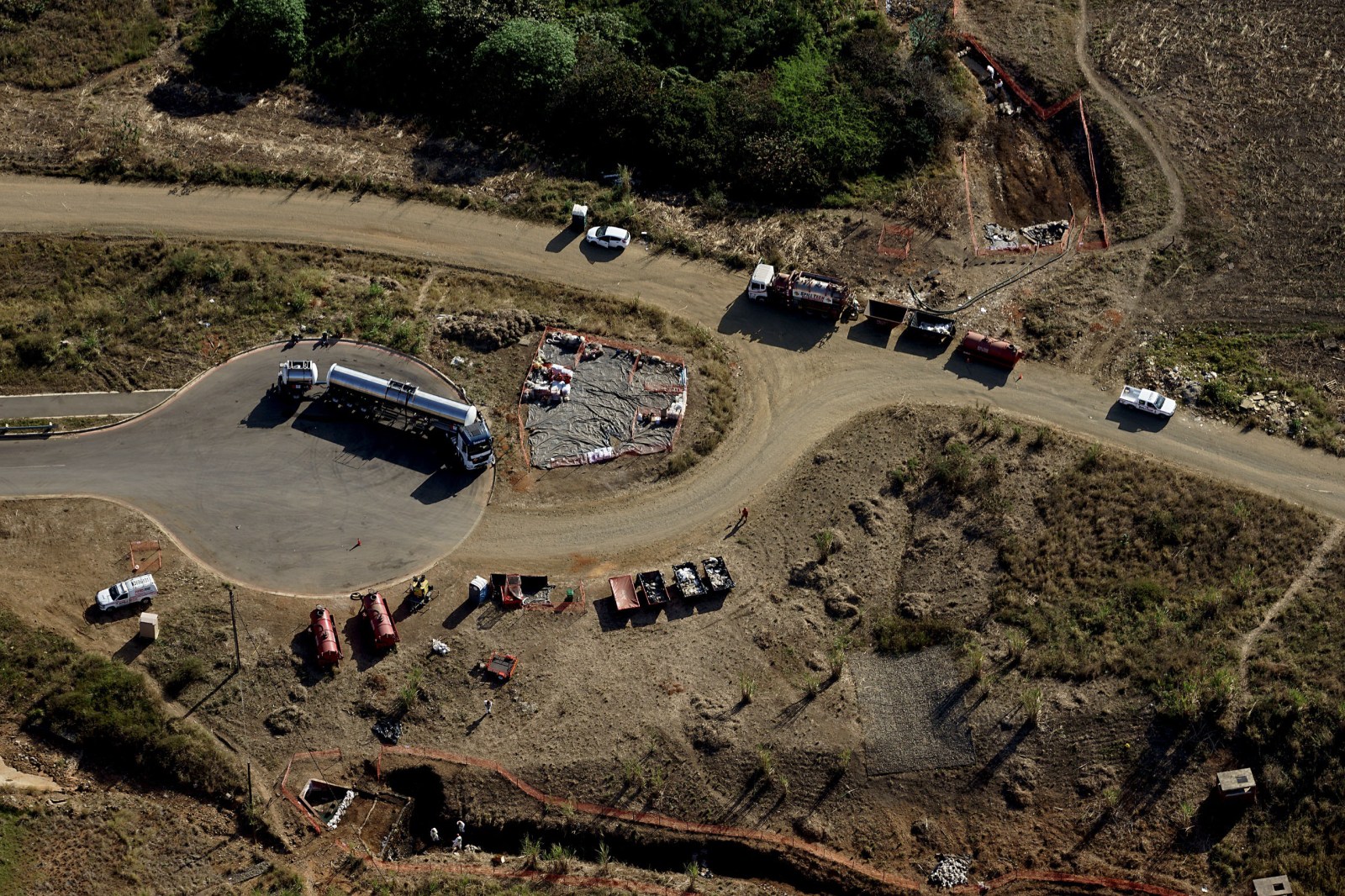 Trucks load up toxic waste and sludge from the boundary of the UPL chemical warehouse north of Durban. Photo:Steve McCurrach

KwaZulu-Natal Environment MEC Ravi Pillay's department no longer trusts UPL. The agrochemical firm has been accused of not only delaying the clean-up and monitoring requirements, but also trying to persuade Pillay that UPL and the government should enter into a voluntary agreement to handle the aftermath of the toxic spill.

Daily Maverick reported recently that the UPL farm poisons group had lodged a legal appeal against a government directive that imposes stiffer reporting and monitoring requirements on the company in the wake of the July chemical warehouse inferno at Cornubia, Durban.

This 21-page “Augmented Directive” was sent to UPL South Africa commercial director Jan Botha on October 27 by the KwaZulu-Natal government. It was issued when his company apparently failed to comply fully with a series of previous directives, notices or warning letters dealing with pollution remediation and monitoring the long-term health of neighbouring communities who breathed toxic chemical fumes for nearly 10 days.

The Mumbai-based company took offence to this news report, protesting that UPL was in no way seeking to delay matters or to avoid its responsibilities by instructing lawyers to lodge an appeal.

In fact, it had been working in a “co-operative manner” with government regulators and providing regular reports to officials about the clean-up operation.

“UPL does not in any way seek to avoid its responsibilities: it merely seeks to ensure that its responsibilities are clearly and unambiguously stated in any directive, and are legal and justifiable in response to the incident … It is untrue to suggest that the appeal was an attempt to delay or obfuscate …” said newly-appointed UPL spokesperson Japhet Ncube.

Now a somewhat different picture has emerged after UPL’s “rushed” legal appeal was dismissed by Ravi Pillay, the KwaZulu-Natal MEC for the Department of Economic Development, Tourism and Environmental Affairs (EDTEA).

In a stinging 20-page decision signed on December 4, Pillay not only rejected UPL’s apparently “cynical” attempt to suspend the directive, but also revealed that his department’s officials no longer trust the word of UPL.

In short, said Pillay, he agreed with the department’s view that UPL “lodged the appeal to ‘kick the can down the road’ on an important issue that has a fundamental impact on public and environmental health”.

“The department seeks to ensure that the relevant reports are available as soon as possible. [UPL] appears not to be aligned with the department in this regard as it appears to seek some delays in the process”.

Not only had UPL sought to delay the process, it also tried to persuade Pillay that UPL and the government should enter into a voluntary agreement to handle the aftermath of the toxic spill.

UPL has not published the full text of its appeal submission to the MEC or its rationale for seeking a voluntary deal with the government known as an Environmental Management Co-operation Agreement (EMCA).

But Pillay said that, given the current circumstances, he was not in favour of such an agreement.

“An EMCA is an agreement. Like any agreement, an EMCA must be based on trust. In the department’s words, the department no longer trusts [UPL’s] words.”

The department’s full submission to Pillay has also not been published. However, it is clear from his ruling that the department has become increasingly frustrated by the apparent failure of UPL to deliver certain reports timeously, with adequate detail or at all.

Significantly, Pillay also found that UPL does not have any legal right of (internal) appeal against the augmented directive issued in terms of the National Environmental Management Act.

UPL still had the legal right to seek a High Court review of his decision – but in the interim, the directive remained in force and the company was obliged to comply with it.

As this protracted game of legal chess continues, UPL has meanwhile taken out full-page advertorials in local community newspapers under the banner: “UPL – The Facts!” and retained a crisis communications company to manage its media and public relations effort.

In its advert, UPL says it will “continue to work with government, communities and interested third parties to manage the impacts of the violence”, but judging from its failed appeal, it remains reluctant to participate in or to fund a multistakeholder forum made up of several civil society groups who believe the company should be held to account for immediate and future human health and environmental impacts emerging from the chemical pollution.

UPL says it has spent R297-million dealing with the impacts of the fire. It remains unclear what proportion of this money has been expended on legal fees, crisis communications and full-page newspaper ads.

In response to questions from OBP, the company said it strongly disagreed that its commitment to mitigating the impact of the chemical spill had wavered or that it was “in any manner whatsoever trying to avoid its responsibilities – quite the opposite is true, in that it has gone above and beyond to remedy the damage caused by the violent criminal attack”.

“It is in this context that UPL has noted MEC Pillay’s decision to dismiss its appeal against the department’s augmented Nema Section 30 (6) Directive and is now considering whether to take the matter on review.

“Since the violent attack it has worked tirelessly to comply with its monitoring, reporting, clean-up, rehabilitation and remediation obligations and has spent over R297-million to date in this regard. It has also been in constant engagement with the authorities regarding these efforts including providing weekly updates to the relevant government departments on the steps being taken by UPL in order to comply with the s30 requirements. This reporting, and all necessary work has continued despite the lodging of the appeal.

“If you wish to read UPL’s comprehensive appeal memorandum you will note that UPL raised a number of substantial concerns about the burden placed by some of the provisions in the augmented directive and also sought clarity on a number of provisions that were vague. At the time of launching the appeal – which was within 24 hours after receiving the augmented directive – the department also indicated that this was the appropriate way to deal with UPL’s concerns. UPL notes the MEC’s decision that he lacks appeal powers. UPL hopes to settle the concerns arising from the augmented directive with the department without having to resort to a review application.

“UPL disagrees with the MEC’s characterisation of its appeal, and of its motives in filing the appeal. It is also disappointed, that despite its continued commitment to working with government to mitigate the impact of the unprecedented violent attack [as a result of the complete breakdown of law and order in the area at the time) very little recognition is given to UPL’s efforts, which has seen ecological systems surrounding the warehouse site recovering over the past few weeks. Despite this, UPL will continue with its remediation efforts over the coming months and remains committed to working in good faith with all stakeholders.

On the question of how much money UPL had spent on legal fees, crisis communications and full-page newspaper ads, the company said:

“Close to 100% of the R297-million has been spent directly on clean-up, remediation and rehabilitation operations in the area.” DM/OBP