Chocolate and sweet overtures: Food diplomacy on the menu for Ramaphosa in Côte d’Ivoire 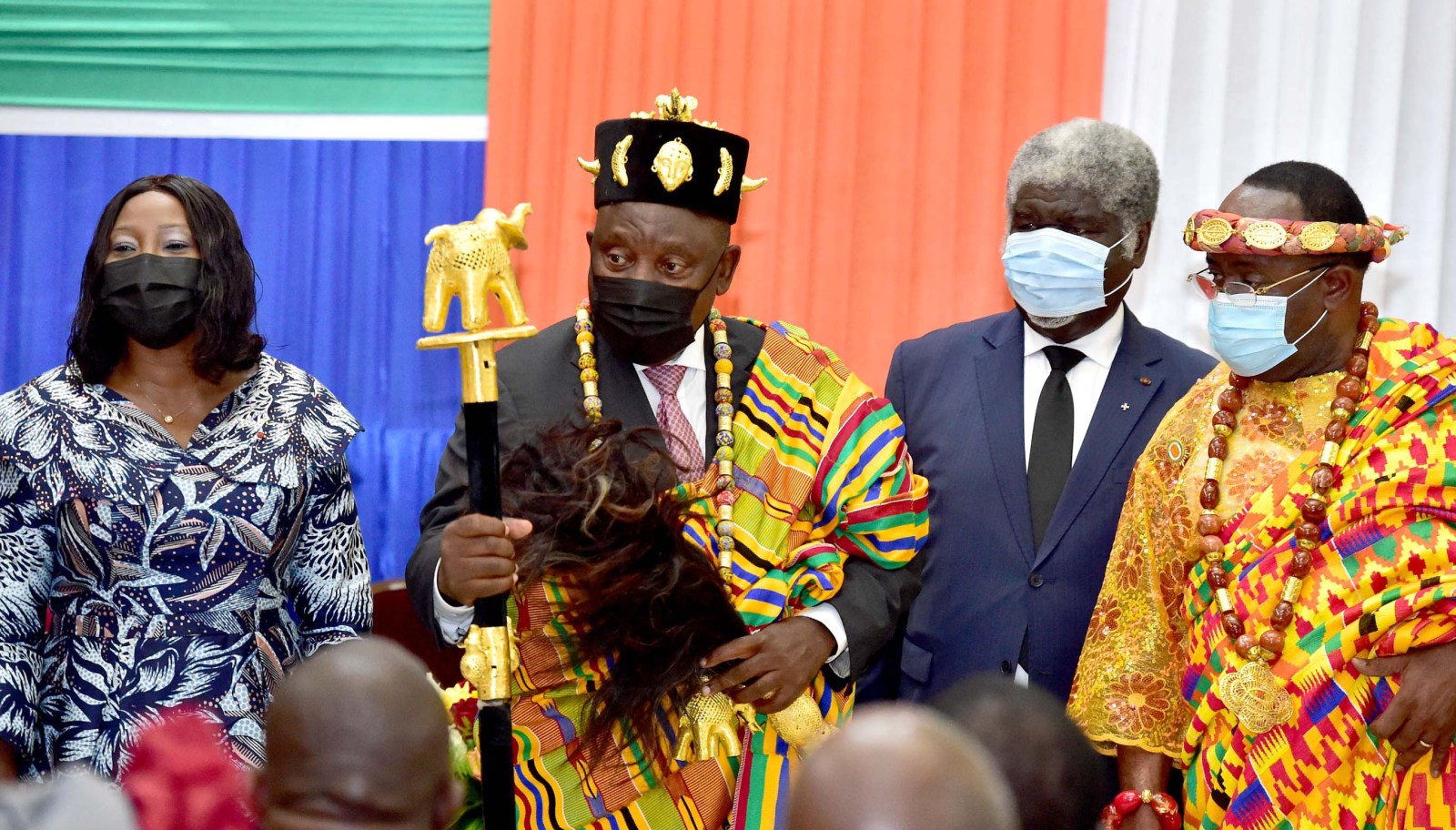 President Cyril Ramaphosa is received by the Governor of the Autonomous District of Abidjan at the City Hall during his state visit to Côte d'Ivoire. (Photo: Elmond Jiyane)

The talk was all about brotherhood, solidarity and strengthening bilateral cooperation, while hints of past strained relations between the countries were neatly avoided.

Language was the least of the problems during President Cyril Ramaphosa’s groundbreaking first state visit to Côte d’Ivoire, where the first day’s emphasis was more on the politics than the money – unlike with Nigeria, the first stop during his week-long West Africa tour.

It was accompanied by French wine and Moët et Chandon champagne, which made some in the delegation question why Côte d’Ivoire was still looking north rather than south for its fine tipple. It speaks as much to trade barriers, which are said to be protective of French wines, as it does to what is still perceived to be a local prejudice in favour of Europe. French baguettes are, after all, a staple here.

Ramaphosa’s own stab at food diplomacy – requesting chocolates from the cocoa-producing country to take home to reward his ministers – speaks to this. “One of my secret missions I have in coming here was to come and fetch my special chocolates,” he said to appreciative laughter.

The seeds of this chocolate story might have been planted by his erstwhile rival, now minister of cooperative governance, Nkosazana Dlamini Zuma, who in 2013, in her capacity as African Union Commission chair, read the assembly of continental leaders an imaginary email from 2063 from her to “dear friend Kwame”, saying she would travel by high-speed train across the continent. “I will bring along some of the chocolates from Accra that you so love, which our children can now afford”.

It might have been somewhat of a snub at the time to neighbouring Côte d’Ivoire, which is the world’s largest cocoa producer, but according to reports, Dlamini Zuma was seduced by the fare at the Ivorian pavilion during the recent Intra-African Trade Fair in Durban, so perhaps it would not matter too much to her now which country the chocolate is from. (She is, incidentally, not part of Ramaphosa’s ministerial delegation to West Africa.)

Exporting the ready-made sweet speaks to localising beneficiation and the kind of value-add that would make it easy for Ramaphosa to walk into a supermarket in Abidjan and find the rewarding item. Right now this isn’t exactly the case.

Both Ramaphosa and Outtara pointed to relations between the two countries stretching back to Nelson Mandela’s visit soon after his release in 1991, and to the efforts of his successor, Thabo Mbeki, to mediate in the civil war that raged in the first decade of this century.

It wasn’t smooth sailing. South Africa was at the time accused of taking sides with former president Laurent Gbagbo, who represented an anti-France position, against Ouattara, after calling for a recount in the UN-certified 2010 poll in which Ouattara was victorious.

During a visit to the country early in 2011 with other African presidents in a bid to find an end to the crisis, Zuma’s car was mobbed by “more than two dozen” pro-Ouattara youngsters who shouted, “Zuma, Zuma, tell the truth”, Reuters reported at the time.

Ramaphosa and Ouattara made no mention of such strained relations when asked by Daily Maverick on why it took 29 years for an official state visit by the democratic government to materialise, after Mandela visited Côte d’Ivoire in 1992 to lay the foundation for future engagements.

“The relationship between our two countries has been maturing over many years, and this consolidated it and put it on a much higher footing,” Ramaphosa responded at the official briefing at lunchtime on Thursday in the Palais Présidentiel in Abidjan.

During his speech at the state banquet, Ramaphosa drew the lines further back, to during apartheid, when first Ivorian president Félix Houphouët-Boigny published an article “labelling the apartheid regime in Pretoria as a short-sighted government which uses an indefensible principle that has worn out the patience of Africans”.

In 1972 he met ANC leader Oliver Tambo and “gave a deep appreciation of South Africa’s struggle against apartheid”.

In 1975, Houphouët-Boigny, in a unique gesture, sent a delegation to South Africa composed of the famous Ivorian statesman Laurent Dano Fologo and his white French wife, Danielle, and a few others. Marriages between black and white people were illegal at the time, “so for the purposes of diplomatic expediency then prime minister BJ Voster had to declare Mr Fologo, who was black like me, an honorary white person”, Ramaphosa said to laughter. “Such were the times. Just imagine, me or President Ouattara being called honorary white people.”

The visit at the time struck a chord with those struggling against apartheid in South Africa, including the country’s current ambassador in Abidjan, Zolani Mtshotshisa, who narrated the same story to journalists during a short briefing earlier that evening.

The official part of Ramaphosa’s visit was for the signing of nine memorandums of understanding (the official statement said 10, but it’s not yet clear which one was omitted), ranging from agriculture, energy and mining, to transport, young people, women and IT and communications, paving the road for increased trade and investment between the two countries. Côte d’Ivoire is Francophone Africa’s biggest economy and headquarters of the African Development Bank, and as such represents an essential stepping stone for businesses into this market.

A business forum was conducted in parallel to this visit, and is set to conclude at noon on Friday.

Ouattara said he and Ramaphosa worked through a number of things and could now see the way forward to strengthen bilateral cooperation. “We have decided to strengthen the relations between Côte d’Ivoire and South Africa because it is not truly reflective of the economic potential of both countries,” he said.

Ramaphosa, in his official statement, in turn highlighted the efforts by the two countries “to strengthen the African Peace and Security Architecture and its structures”, as well as their discussions on “the consolidation of democracy on the African continent along the principles of the African Charter on Democracy, Elections and Governance”.

Ouattara’s election a year ago for a third term in office was boycotted by the opposition, who cried foul after Ouattara said a constitutional amendment in 2016 allowed him to restart his mandate, despite a two-term limit on presidents. Some violence accompanied the polls, which saw him elected with more than 94% of the vote.

Ramaphosa, however, said he applauded the efforts by Ouattara and the citizens “to foster national reconciliation”.

Some of this would have spoken to the post-apartheid racial reconciliation project, but Ramaphosa, in his dinner speech, also revealed that Ouattara sent him “a very kind message” after the “public violence” in KwaZulu-Natal and Gauteng in July, which came days after Zuma’s jailing.

“It went a very long way to strengthen the solidarity and brotherhood between yourself and myself,” Ramaphosa told his counterpart.

Although this trip is officially about economic diplomacy and advancing the objectives of the African Continental Free Trade Agreement, Ramaphosa’s troubles back home, ahead of the ANC’s elective conference in a year, have been continuing unabated.

Any solidarity with his current political headaches would have been welcome to him. Traditional leaders bestowed a local chieftainship on Ramaphosa, and placed a crown on his head which had him asking, rather bemused, whether he should take it off before making his speech. It’s the kind of environment Zuma would have moved more comfortably in.

Ramaphosa nevertheless kept on the garbs, before telling the audience in the grand Hôtel du District (the district authority hall) that traditional leaders were a reminder that all Africans were connected and “children of the same ancestors”.

He was also told that Côte d’Ivoire was now a home for him, and during this brief respite from his troubles, Ramaphosa said: “Thank you very much for welcoming me home.” DM